Glasgow is a city of grey spires and greyer skies. But even in unflattering light, under a bleak, granite-coloured sky, Glasgow maintains a rock 'n' roll swagger. The city has a serious musical bent, full of rock stars, pub singers, buskers and live-music venues. I wonder what would happen here if people ever stopped singing.

Which explains why I find myself on an overcast afternoon – the kind that's so typical, Glaswegians have their own word for it: dreich – sheltering from the rain inside an empty music venue listening to stories about Simple Minds, Jack Bruce and AC/DC, artists that all started out in the city.

Launched this past summer, a new guided walking tour of Glasgow's music scene is a pilgrimage of sorts that traces an invisible line of history through some of the most storied corners of the city.

"A Glasgow audience will tell you they dislike you as readily as they'll tell you they love you," says guide Fiona Shepherd, with a hint of typical deadpan humour as we explore King Tut's Wah Wah Hut. A staging post for the likes of Coldplay and Radiohead, it was the venue where Oasis were first spotted and signed in 1993. "A place like King Tut's reputation extends far beyond Glasgow. New York magazine put it in the top 10 euphoria-inducing experiences you could ever have – even above climbing Mount Kilimanjaro. It's ground zero for Scottish music."

Shepherd is the music critic at The Scotsman, and she leads us from the Royal Concert Hall on Killermont Street (eulogized in song by Aztec Camera) as we dodge puddles outside the defunct Apollo theatre (where Freddie Mercury once was dragged off stage by adoring, if drunken, fans), then duck into the Glasgow School of Art (a launchpad for Travis, Belle and Sebastian, and Teenage Fanclub), and stop for a pint at Nice 'n' Sleazy (a go-to bar for Franz Ferdinand and Mogwai).

"The nearness of these venues not only dictates the pace of the tour, but also the pace of our music scene," Shepherd says. Her point is clear: It's nearly impossible to walk more than a few blocks from the pedestrian shopping area of Sauchiehall to the mercantile hub of St. Vincent Street without passing a gig venue, concert hall or pub that is famous for its indie, rock or country connections.

There is something about the city's collective musical quotidian when listed off – Simple Minds, Primal Scream, Belle and Sebastian, Del Amitri, Texas, Teenage Fanclub, the Vaselines, Travis – that recasts the city as a place where anything is possible when the lights dim and the spotlights go up. The latest of these local acts – electronic band Chvrches, singer/songwriter Paolo Nutini and rockers Biffy Clyro and Twin Atlantic – underline the disproportionate influence the city has on global download charts.

The reasoning behind the tour's launch is simple: Rock fans have loyalty in spades and you should never underestimate the appeal of a dilapidated, skuzzy rock 'n' roll venue. But given that Glasgow is the only UNESCO City of Music in Britain, you could argue that the walking tours are overdue.

Even Austin, Tex., which brands itself as the "live music capital of the world," doesn't have that status.

"Glasgow is big enough to support lots of bands and artists, but small enough to create a sense of community where everyone can have their voice heard and find their own scene," Shepherd says. "There's a communal feeling of being in all of this together."

Later that night, at the front of a gig at the seething, yet dilapidated Barrowland Ballroom – which is lit up outside in retina-burning neon – I can feel the sense of togetherness. As Mogwai walks on stage, the crowd becomes a frenzied riot: It's like being stuck in a thrashing tank of friendly, huggable piranhas. At that moment, I didn't want to be anywhere else.

Rock critics say that scenes aren't meant to last. They sparkle, flourish, then burn out: drugs, money, narcissism, whatever. But that spark has never really died in Glasgow. Cynicism, a notoriously Scottish trait, helps the bands here curb the susceptibility to get any ideas above their station. And maybe the rain keeps everyone grounded, too. 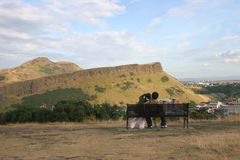 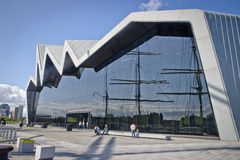 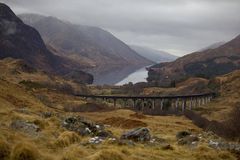