Salt water stretching to the horizon. This was not what the brochure had promised. Like a vast inland sea, Utah's Bonneville Salt Flats were looking more like something Columbus would sail. This wasn't biking country, this was more maritime-rescue country. The pamphlet I'd picked up at my Salt Lake City hotel had offered a sparkling white vista – a salt plain so vast that the curvature of the Earth could be seen. The ideal spot to set a personal land-speed folding-bike record.

Not today it seemed.

These famed alkali plains are home to land-speed records and have provided the cinematic backdrops to movies such as Buckaroo Banzai, Pirates of the Caribbean and of course The World's Fastest Indian. The top speed was set way back in 1970, when the rocket-powered Blue Flame achieved 622.407 mph. The surface stays race-track smooth thanks to periodic flooding that heals cracks and blemishes with a new salt veneer. Today was one of those natural spa days for the flats and I was looking at a lake rather inconveniently parked where my lake bed was supposed to be.

So much for any record setting today, unless it was a one-way race to the bottom.

Reluctantly collapsing the origami aluminum marvel that is today's folding bike and stowing it in the trunk of my car, I readied for the two-hour eastward trip back to Salt Lake City. In defeat. That is until I spied a man walking across the lake. There, amid the waves, kilometres offshore, was a guy out for a stroll. As it turned out, it wasn't the guy known for his water-defying habits, but a Russian long-haul trucker cooling his feet.

As he splashed ashore a half-hour later, pants rolled up to his knees, I closed my mouth, scowled at the aquamarine horizon and started reassembling my metal steed. If he could do it – mere mortal – then so could I. To the horizon or bust. Or sink trying.

Donning my sandals, bike at arm's length like a mechanical depth-sounding Judas goat, I waded out into the brine. Gingerly I pressed down into the ooze, ready to jump back ashore if I'd found bottomless quick-salt. Nothing gave – it was firm. I pressed harder, trying to break through the crust. It was like concrete. I was standing on the bottom of what appeared to be 50 square kilometres of wading pool.

Time to make some lemonade out of Bonneville lemons.

Renaming my bike the Saltcycle II (or Crusty Rusty, given the amount of corrosion that was already starting), I set a course for the distant horizon, a row of bluish mountains poking up out of the lake. Pedals scooping water, I slowly picked up speed. Bottom still firm. A little faster, tires cutting through waves that cast swimming-pool-like reflections on the bottom. This was fun! I clicked into my highest gear and at full speed I left a salty rooster tail arcing upwards behind me as I pedalled furiously.

And faster than I could say Jack Robinson Crusoe, an island appeared! Out here in mid-lake was my own deserted piece of terra salty firma, mere centimetres above the waves and invisible from shore. With the quiet swish of wet rubber tire across fine crystal, I gently emerged from the brine and rolled to a stop.

I looked behind me. My tires hadn't left any trace in the rock-hard lake bottom and the waves were unmoved by my passage. In the distance, now just a faint smudge on the horizon, was my car parked at the Highway 80 rest stop.

This was what the brochure had promised. A sparkling plain of hard, dry Bonneville salt flat. Time for some record setting! First things first, though. I wanted a sample of my island, a little taste of this new-found land on which I stood (which is a little pun – the region is called the Newfoundland Evaporation Basin). My tongue confirmed that this indeed would go well on the rim of my margarita glass.

In fact the areas adjacent to the flats are commercially mined for potash (KCl) and halite (NaCl) and there is even some concern that the aquifer that recharges the salt crust – as I was seeing (and tasting) today – is being depleted. The race course may not be here forever.

To record my quite unofficial offshore endeavour I set my video camera on the ground and proceeded to roar back and forth in front of the lens (officially, two passes are needed for a record). Roar might be a bit of overstatement, but I did make plenty of zoom-zoom-zoom sounds as I sweated under the Utah sun. I could see the headline – man on zippy red folding bike in middle of lake breaks 50 kph barrier! Wordy but true.

Big grin on my face and giddy with my Tour de Saline victory, I headed back out to sea and back to my car. Mission accomplished – I had set a record at Bonneville.

Getting through an extreme weather alert in coastal North Carolina
March 14, 2016 Could I really backpack across Europe alone with my girls?
March 7, 2016 Finding a bracing dose of authentic culture at a Moroccan bath house
February 29, 2016 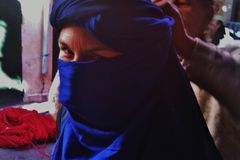