For years, I had drooled over photos of dramatic peaks and glaciers snapped by adventurous souls who had hiked, skied or dogsledded through Auyuittuq (pronounced "eye-ooh-ee-took") National Park in Nunavut. I had admired depictions of it on Inuit tapestries and print collections – the Northern Lights, Inuksuk trail markers, ice fields and craggy fjords alive with narwhal and belugas – much of it from the community of Pangnirtung on the park's doorstep.

But I wanted to see it all myself and finally persuaded a friend to hike with me. We would reach Pangnirtung through the back door, via a leisurely 97-kilometre, 10-day trek clear across the park, east to west, starting from the community of Qikiqtarjuaq on southern Baffin Island's east coast.

(Most people visit Auyuittuq National Park from Pangnirtung on an easily arranged day trip by boat. Especially during the 24-hour daylight of July, hiking from the head of the fjord to the Arctic Circle marker is an easy trek. Going all the way from "Qik" to "Pang," as we did, requires complicated logistics.)

We started in the midnight sun, following the Owl River across spongy tundra that was an ankle-high garden of willows and rhododendrons. We picked Arctic blueberries and spotted lemmings and snowy owls.

After several tricky river crossings in icy glacial waters, we reached the halfway point and it became clear why Auyuittuq was declared Canada's first national park north of the Arctic Circle. A jagged range of mountains came into view, including the weird profile of Mount Asgard, 2,000-metre-high flat-topped twin towers that had their 15 minutes of fame in the opening sequence of the 1977 James Bond film The Spy Who Loved Me (a stuntman skied off the top with a Union Flag parachute). From Summit Lake, the highest point on the hike, we then followed the boulder-strewn Weasel River. This took us down through a remarkable landscape of glacier-draped peaks and sheer rock monsters like Mount Thor with the world's longest vertical cliff face of 1,250 metres.

Our hike finished up at the head of Pangnirtung Fjord, where we met a local Inuk who took us in his boat 28 kilometres down the snaking, steep-walled inlet to Pangnirtung. The hamlet is perched at the foot of Mount Duval with a cluster of restored, red and white Hudson's Bay Company post buildings on the beach. It is one of Nunavut's most scenic communities; it is also one of the most artistic.

One of the bonuses of visiting Auyuittuq is passing through Pangnirtung, a community of 1,300. As in Cape Dorset, the centre of world-class Inuit carving and printmaking, most households in "Pang" derive at least some of their income from arts and crafts.

At our campsite outside town, we had hardly set up the stove to simmer a freshly caught Arctic char before a stream of artists began to saunter by our tent. They tempted us with carved earrings in the half-moon shape of an ulu knife, a serpentine sculpture of a polar bear and stencilled landscape prints.

"Artists from all over the world have used the park as an inspiration," said Kyra Fisher, general manager of the Uqqurmiut Centre for Arts and Crafts. The round building in the middle of the community is a unique tapestry studio, one of only four in the world to employ tapestry weavers to interpret the work of contemporary artists. Inside the sunny room, four female weavers, including head weaver Kawtaysie Kakee, sat side by side in front of a wide loom chatting in Inuktitut, their fingers threading colourful yarn across a mural.

(When I was there, in 2009, they were working on a huge Olympic tapestry commission, three metres long and 1.7 metres high. It was a collage of Arctic landscapes with athletes performing both Inuit and conventional winter sports, and it now hangs in the Richmond Speed Skating Oval in Vancouver.)

One-of-a-kind private commissions make up the bulk of the studio's work and have been sold into private collections as well as institutions such as the McMichael Canadian Art Collection and the Canadian Museum of Civilization and The National Gallery of Canada. Not bad for a remote village just 20 kilometres south of the Arctic Circle.

The Uqqurmiut Centre is Inuit-owned and its gift shop is well stocked with woven belts, tassel-topped Pang crocheted tuques, carvings and prints. "People come here for the landscape and then they see the art," said Deborah Hickman, the centre's artistic adviser. "When we can, we like to organize for visitors to have tea with the artists. Altogether, it enriches people's experience of the park."

Not far from the arts and crafts building is a visitor's centre with a community room where Inuit elders sometimes gather to chat and sell their handicrafts. Since my cross-park hike, I have returned several times to Pang and I always make a beeline there to buy beautifully made embroidered mitts trimmed with fur as gifts. It's one of several local gift shops you won't want to miss.

Visitors to Auyuittuq National Park must register, pay a fee and take an orientation session before entering the park. Make arrangements at least two weeks in advance. 867-473-2500; pc.gc.ca/auyuittuq

Peter's Expediting & Outfitting Services is run by Peter Kilabuk – a former Nunavut MLA – who takes hikers and day-trip visitors into the park in his boat. 867-473-4060; kilabukoutfitting.com

The Uqqurmiut Centre for Arts and Crafts is open weekdays; weekends are by appointment or drop-by luck. 867-473-8669; uqqurmiut.com

The Pangnirtung tapestry studio will release a 10-piece collection in October that will be on view in Toronto at The Guild Shop (theguildshop.ca) in November and moves to Montreal in March at the Canadian Guild of Crafts gallery ( canadianguild.com).

Adventure Canada has an annual Arctic cruise with an artistic theme. There are stops in Kimmirut, Cape Dorset and Pangnirtung. This year, the trip is called Heart of the Arctic and sailing dates are Sept. 12 to 24. From $3,995 (U.S.) a person; adventurecanada.com

National Park adventure: Where the narwhals are
July 27, 2011 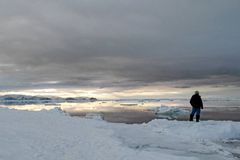