The haunting cry of a bald eagle followed my stand-up paddleboard across still waters. Beside me, sandstone shores – fractured and orange – rose sharply from the ocean, occasionally giving way to the arid headlands of Mayne Island, dotted with saxifrage, Garry oak and even cactus. Waves washed over my toes, and in the waters below, fish darted through emerald forests of kelp.

Twenty years earlier, I spent an entire summer guiding sea-kayak journeys amid these pastoral southern Gulf Islands – part of an area now referred to as the Salish Sea. The region was, and remains, surprisingly wild, given that it lies within sight of Vancouver and its North Shore mountains.

Fate and circumstance kept me away for two decades, until last spring when, on a whim, I bought an inflatable stand-up paddleboard. Living in British Columbia's landlocked interior, I loved surfing, missed the ocean and was looking for a cure. 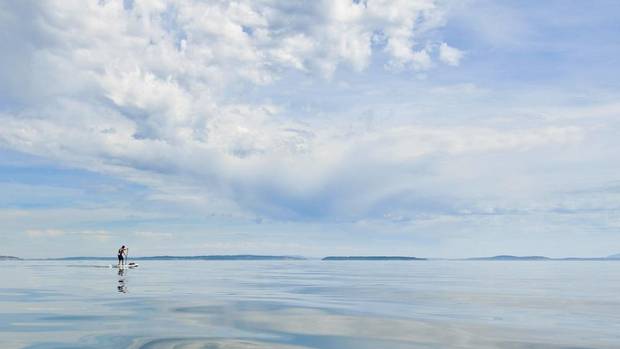 Dave Quinn
The board was tippier than I’d anticipated, and within the first five minutes I’d fallen ungraciously into the icy waters of a mountain lake near my home. And yet, I recognized something magical in the activity: the sweeping view that came from standing upright (as opposed to hunched over in a canoe or kayak), the gentle flex of the paddle in hand, the jostling of waves underfoot. I paddled six kilometres the first day. Ten the next. Then 20. And 30. I was hooked. The next week, I paddled 50 kilometres down a longer lake, deflated the board, rolled it up and hitchhiked home.
Somewhere along the way, the idea of paddling to Victoria from Vancouver sprang to mind. And once I’d imagined the journey, I could not let the idea go. It was a route I’d traversed hundreds of times aboard BC Ferries, but that’s what drew me – the opportunity to do something so routine in such a novel manner. It felt like true exploration, right outside the backdoor. Crossing the exposed waters of Georgia Strait would present a serious challenge, but I was fit, knew exactly the speeds my board could average and trusted my judgements on weather and tides.
So six weeks after the board arrived, I tossed it into a duffel bag and hopped on a plane. 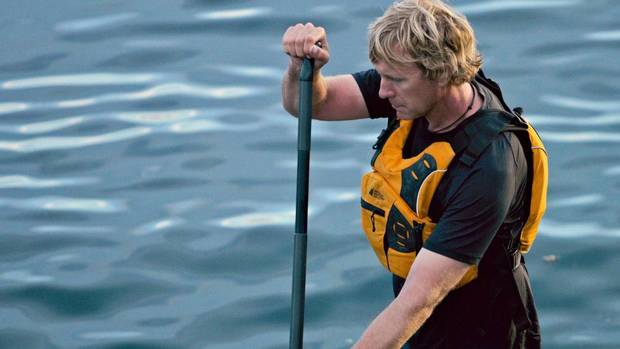 Kalum Ko
On a sunny June day, amid a congestion of dog walkers and joggers on Vancouver’s Spanish Banks beach, I lashed supplies to the board, waded into the ocean and paddled away. Two friends decided to join me, and they bobbed silently alongside in a double sea kayak.
Beyond the University of British Columbia, we passed the popular clothing-optional Wreck Beach. The water grew choppy and a series of enormous jetties – some reaching seven kilometres out into Georgia Strait – forced us far from shore. Immense aircraft bound for Asia roared overhead. The Fraser River spewed its heavy load of silt into the ocean, turning the water the colour of coffee, and we navigated a maze of mud flats while passing its delta. As the sun dropped, we set up camp on Richmond’s Steveston Jetty. A stone’s throw way, evening kite flyers and walkers enjoyed a shoreline trail. But our eyes were drawn west – across open waters – where the Gulf Islands floated beneath a crimson sunset.
The next day was tough: Strong gales forced us to seek shelter in the lee of Vancouver’s immense container terminal. Georgia Strait lay ahead – a 25-kilometre open-water crossing that would be the crux of the trip. Not until evening did the winds begin to drop, and when they did, we set off at a torrid pace, hoping to reach the far side before dark. As the flooding tide rushed northward, glassy upwellings the size of football fields blossomed around us.
Our route intersected four ferry channels and two international shipping lanes, so before leaving shore, I’d wrapped my baseball cap in tinfoil. It seemed hokey, but a U.S. Coast Guard study showed this to be among the most effective methods of reflecting radar, and thus increasing visibility. Before long it became clear the foil worked: Several ship captains hailed us on the VHF radio, alerting us to their position and offering encouragement. Four hours later, as the sun’s final rays waned and the sea turned black, we reached Galiano Island. 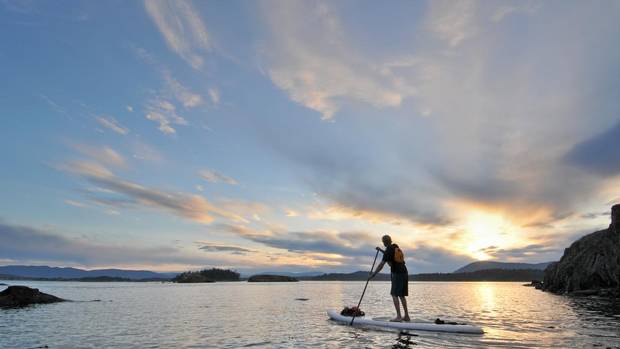 Dave Quinn
In the morning, a gently ebbing tide whisked us through Active Pass, a constriction between Galiano and Mayne islands busy with ferry traffic. A colony of curious harbour seals followed my board, heads reaching high for a peek before disappearing below the surface.
We had finally arrived at my old stomping grounds, and much remained as I remembered: the peeling ochre bark of shoreline arbutus, the tang of salt and sea grass, sailboats heeled under gentle winds. Passing the Belle Chain Islets – where I must have camped 20 times – brought a surge of nostalgia.
But the name of the area itself – the Salish Sea – had changed. Proposed by a Canadian marine biologist, and adopted by both the United States and Canada in 2003, it unifies a jumble of coastal regions – Gulf Islands, Georgia Strait, the Strait of Juan de Fuca, Puget Sound – under a single 18,000-square-kilometre ecosystem umbrella.
Also new to me: the Gulf Islands National Park Reserve – encompassing 16 islands, along with numerous islets and reefs. It was created in 2003 to protect “the most heavily utilized and impacted of all marine regions on the West Coast,” according to Parks Canada. (A proposed parallel National Marine Conservation Area Reserve – protecting underwater resources – is in the feasibility study stage.) 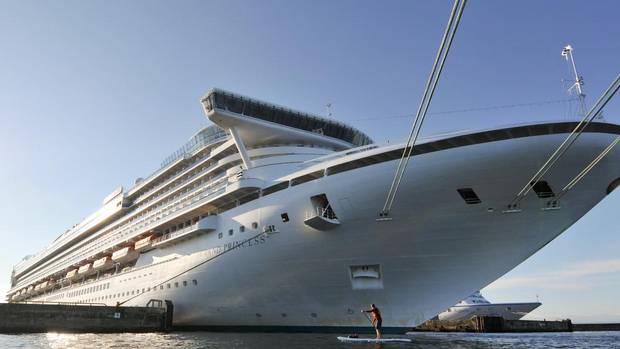 Dave Quinn
Twice a day, with each rise and fall of the tide, immense volumes of water are drawn into the Salish Sea and then expelled again. The associated currents and upwellings – which bring nutrient rich water to the surface – are the source of the region’s robust marine life. An estimated two million sea birds pass annually, while salmon, herring, sea lions, orca and porpoise all thrive here. As do red rock crabs, and the remnants of their shells – smashed by hungry eagles – littered the rocky outcrop of our third camp. After a curry dinner, we settled into sleeping bags, watching the distant lights of Saanich. Already the modern world felt like a distant memory.
The next day took us down increasingly affluent shorelines, past glass mansions and barking poodles, as we drew closer to Victoria. The stand-up paddleboard generated a lot of interest from shoreline walkers. “I can’t wait to give it a try,” one senior woman declared. “I’ve heard its great for the core!” Her husband clearly did not share the same enthusiasm, but I urged her on; almost anyone can be up and paddling within minutes. “It’s lots of fun,” I promised.
Five days and 150 kilometres after leaving Vancouver, we rounded Gonzales Point and entered the Strait of Juan de Fuca, leading to the Pacific. The ocean grew angry and grey. Whitecaps leaped up, and for several kilometres I was forced to paddle on my knees. At last we ducked into the shelter of Victoria Harbour, floating beneath the visiting mega-yacht Athena, reportedly for sale. Half an hour later, my paddleboard was rolled up and we were headed home. Aboard a ferry, gazing over waters, shores and islets we’d explored only days earlier, I felt the same thrill I’d known as a child – as if I was seeing this familiar landscape for the first time. 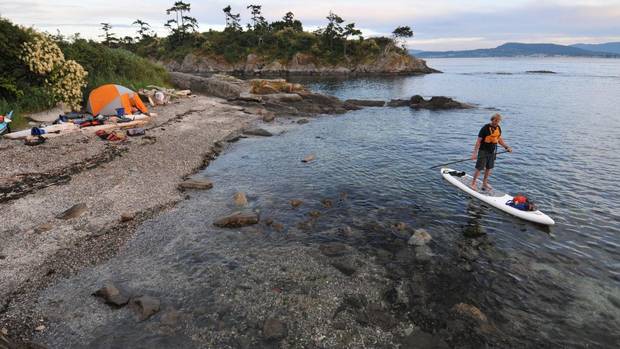 You don’t need a standup paddleboard to explore the Gulf Islands. BC Ferries (bcferries.com) offer daily service from Tsawwassen (mainland) and Swatz Bay (Vancouver Island) to Pender, Mayne, Galiano and Saturna Islands.
Where to stay Plenty of cozy B&Bs and rentals dot the islands, including the lovely Saturna Lodge (saturna.ca). Other listings can be found at mayneisland.com.
What to do Bikes offer the perfect way to explore the quiet backroads. You can rent one at Salt Spring Adventure Co. (saltspringadventures.com). Or CycleTreks (cycletreks.com) offers three-day fully guided and catered tours.
Hike the exposed rocky headland of East Point on Saturna Island (eastpointresort.ca) where tidal currents race past and orca are often spotted just offshore.
For more ideas and activities visit gulfislands.ca.
Page 1 2 3Next