There is a town nestled among hills in central Colombia so perfect that even the air smells of lightly scented perfume. Flowers hanging off ylang-ylang trees infuse the air in the central park, one of the best places to sit and wait to see if time will inch by you in a town where it appears to have stopped.

The tranquil pace of life is one of the many qualities that draw dream-seekers, tourists and artists to Barichara, a rural village of only 4,000 inhabitants boasting Spanish colonial architecture, unique gastronomy and a flourishing artisan community.

Boughs of bougainvillea drip from the balconies of perfectly maintained homes, their whitewashed façades in striking contrast to ochre tiled roofs and streets paved with gold-hued cobblestones. They come from the rock in surrounding hills that gently unfold into a landscape rich with colour, where rust-coloured earth and vibrant green pastures and forests are made brighter by a sun that always feels the perfect side of warm.

"I came to the conclusion that one doesn't just fall in love with women. I fell in love with Barichara," said Javier Martinez, a stone artist here. Generations of stoneworkers have based their livelihood on the buttery-yellow stone that appears to possess magnetic properties, drawing sculptors such as Mr. Martinez to live in Barichara. He is part of a burgeoning community of artists who cite the light, texture and colour here in trying to explain the intangible yet palpable magic of the place that gives them inspiration.

"There is a lot of material to work with here that is just as poetic as it is physical," said Pedro Gomez, an architect-turned-stoneworker. That, coupled with an abounding creativity, has given way to a great variety of workshops and boutiques featuring impressive crafts, ceramics, stone and wood sculptures and innovative furniture.

Mr. Gomez and his siblings have converted their parents' home into a small hotel, La Nube (The Cloud), that is among the most beautiful in its simplicity and design among a growing selection of colonial inns and boutique hotels. The former home once belonged to a wealthy landowning family who used to house their horses in the courtyard ringed by bedrooms for the farm workers.

"We've tried to recuperate the materials that were always used," said Mr. Gomez, who also gave the historic home contemporary, minimalist touches. Today, uneven stones fill the spacious courtyard, decorated only by a stone sphere over which water pours from an aljibe, an Arab-Spanish cistern.

Barichara has long drawn visitors from Colombia's elite and political class. And, during an era when most of Colombia's countryside was home to guerrillas and their battles, Barichara was, oddly, spared. Locals thank cacti and the openness of the countryside for making the area a less than ideal area for guerrillas to roam and hide.

Today, the best way to explore the countryside is by walking the Camino Real - an ancient road paved with stones built by the indigenous Guane people that connected their settlements. When the Spanish Conquistadores arrived, they extended the road all the way to Bogota, almost 300 kilometres to the south. Starting at the town's lookout, the reconstructed nine-kilometre trail is a gentle descent to the hamlet of Guane through a valley dotted with cacti and giant trees draped with filaments of hanging moss called barba de viejo, or old man's beard. Keep your eyes open for fossils embedded in the trail's stones and the occasional goat occupying the path, basking in the sun.

If you don't see a goat on the trail, you might find one on your plate: Dishes of grilled, roasted or stewed goat are a specialty here and among a variety of regional delicacies. Signs on the doors of homes advertise the sale of Barichara's renowned sausages - harder to find is a place that actually serves them. Across the street from the shuttered tobacco factory, knock on the door of Dona Beatriz Bautista de Campos, who many locals claim is the Dona of sausages.

Follow the scent of a wood-burning stove to her kitchen where intestine casings hang from a nail, ready to be stuffed with ground pork, garlic and cumin. She'll simmer the sausages in guarapo, a traditional drink of fermented sugar cane and water, that, once reduced, coats the crusty sausages in a caramelized syrup. It's hard to imagine something better, but many locals prefer what is replacing the guarapo preparation as the real, Barichara deal: sausages cooked in Coca-Cola.

The most anticipated food-gathering experience in Barichara lasts about a month any time from April to June, when the clear air surrounding the town is suffused with cumuli of flying ants. When a burning morning sun follows a night of rain, female ants leave their underground colony to take their nuptial flight, exposing themselves to ant-hunters who flock the hillsides in hot pursuit of the ants' tasty rear ends. Once caught, the ants are toasted and eaten as a crunchy, nutty-flavoured snack.

The tradition of hunting hormigas culonas - literally meaning big-bottomed ants - was started more than 500 years ago by the Guane, who relied on the ant's high level of protein. They're thought to have aphrodisiacal properties too. Today, they are a delicacy so sought after that, upon spotting rising clouds of fluttering ants, locals will drop whatever they're doing and take up the chase.

"Here, it's an event. People don't go to work and kids don't go to school," said Claudia Diaz, who helps manage Color de Hormiga, a restaurant offering gourmet ant cuisine (it buys 1,200 pounds of ants a year). Dishes of filet mignon and stuffed chicken breasts swim in a sublime ant reduction topped with toasted ants. The restaurant also serves meals out of its eco-farm, Granja Campo Abierto, where guests staying in its lovely and simple accommodation can take part in the ant frenzy surfacing from one of more than 40 ant colonies protected in its nature reserve.

Throughout the year, several shops in town sell jars of toasted ants that are purported to have aphrodisiacal qualities. If the ants don't have the desired effect, try sabajón, a thick drink made with aguardiente, a sugar cane liquor, and goat's milk mixed with its most fortifying ingredient, an egg. As one storefront sign suggests, "Don't take Viagra. Drink goat's milk."

For all its aphrodisiacs, Barichara goes to sleep early. By 9 p.m., it is so quiet you can hear a bougainvillea flower drop from a balcony. That is, until a rooster's call wakes you up to get you out chasing ants.

Getting there: Barichara sits at a temperate 1,300 metres, a six-hour drive north of Bogota. By bus, it's an eight-hour journey from Bogota to San Gil, where hourly buses leave for Barichara, 45 minutes away. It is also accessible from Bucaramanga, where flights leave for Bogota, via a 2.5-hour bus ride through the stunning Chicamocha canyon. 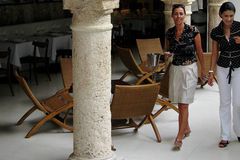