I was in a hilltop theatre built for 10,000 people, one that had one of the most striking backdrops I had ever seen. The sun, sliding low toward the earth in the west, lit up a mosaic of olive groves and grasses in the valley below. Deep green mountains rose beyond. Before me, 80 rows of seats tumbled down the hillside. Every single one was empty.

I was in one of the most spectacular sites in the ancient world, one inscribed as a UNESCO World Heritage Site in 2014. And I was completely alone.

When it comes to sights, the ancient city of Pergamon is best known today for its Great Altar – which is in Berlin. But the altar was hardly an isolated creation. Instead, it was one of many mountaintop marvels built in the capital of one of the Hellenistic world’s most sophisticated kingdoms. And while only the most intrepid tourists or devoted history lovers know it, Pergamon still exists. Today, the ancient acropolis overlooks its more modern permutation: the somewhat ramshackle, completely entrancing town of Bergama, located 100 kilometres north of Izmir.

The city, which may have first been settled as far back as the seventh century BC, came into its own only after Alexander the Great’s death in 323 BC. His generals split up the sprawling empire; southern and western Anatolia went to Lysimachus, who made Pergamon, perched on a ridge 335 metres high, a treasury and military base. Lysimachus put his favoured general, Philetairos, in charge. His trust proved ill placed. Philetairos betrayed Lysimachus and declared Pergamon an independent kingdom in 283 BC. 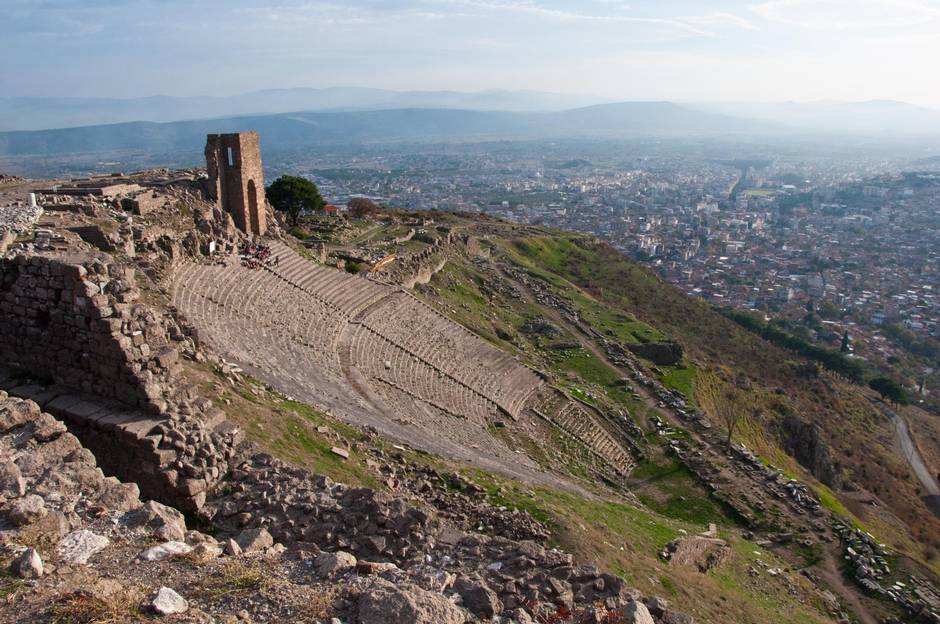 The ancient theatre of Pergamon. A theatre built for 10,000 people. (Photos by Amanda Ruggeri)

And he began to build. By the second century BC, the capital held about 25,000 to 30,000 people within its four-kilometre-long walls. The library, estimated to have 200,000 books, was second only to Alexandria’s. (The story goes that after the Alexandria library burned, Mark Antony gave Cleopatra the collection from Pergamon.) The gymnasium, which measured 210 metres by 145 metres and hosted philosophy classes as well as sport, was one of the largest in the Hellenistic world. Three-storey houses clustered around gardens; water that collected in their courtyard cisterns was supplemented by that carried through lead pipes from Madra Mountain, 42 kilometres away.

The kingdom of Pergamon lasted until 138 BC. Afterward, Pergamon became the capital of the Roman province of Asia. The Asklepion, connected to the Acropolis via the 900-metre-long, colonnaded Sacred Way, became one of the world’s most famous medical centres and healing spas – as well as the first psychiatric hospital in history. (One particular focus: dream interpretation.) The enormous temple of Trajan was built for the Roman emperor in 114 AD, requiring the destruction of workshops and houses and the levelling of rock. Another theatre, holding 30,000, was built. The one I clambered through was enlarged. By the third century, the city held 120,000 people.

After the Roman Empire split, the city began to decline – and, in 716, was destroyed by the Arab conquest. 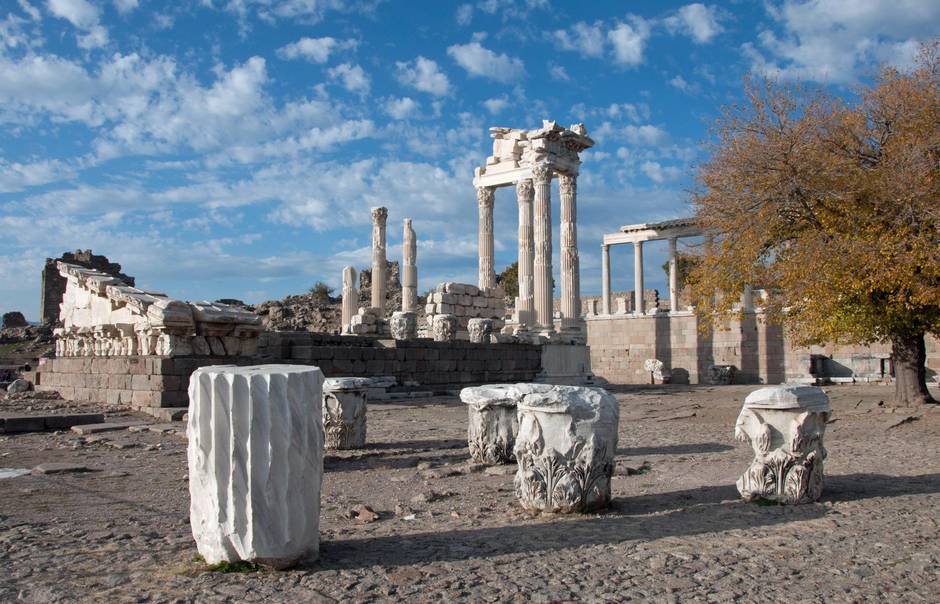 The ancient acropolis overlooks its more modern permutation: the entrancing town of Bergama.

But Pergamon persevered. And although the ancient ruins, which loom over the town from above, are exquisitely unavoidable, the modern settlement has its own lures. I spent a morning at Bergama’s street market, buying pomegranates and packets of saffron, jumping out of the way for a donkey pulling a cart. I chatted with a cheerful waiter over lahmacun, Turkey’s flatbread loaded with minced meat and hot pepper, using 90 per cent hand gestures.

Another afternoon, I joined the owner and two other guests of my B&B for a drive into the forest. From a hilltop stop, the landscape looked like a carpet of perfectly round, astoundingly emerald puffs. Our destination was a pump to collect spring water. (It was the best water in the region, the owner said. I drank it straight from the fountain; he seemed to be right.) On the way, we stopped at a tea shop and had cay on the outdoor terrace under the friendly gaze of a wrinkled woman. Her traditional dress jangled with silver sequins.

For most of the travellers who make it here, though, the real draw is ancient Pergamon. Even now, more than two millennia after its apogee of power, you can visit the Asklepion and the library and gymnasium. Many of the crumbling ruins demand serious imagination – or a visit to Berlin – to reconstruct.

But not all. The columns of Trajan’s temple still soar to the sky. A colonnade still marches through the Asklepion. And the extraordinary mountainside theatre still beckons visitors to sit in its seats … even if, on an autumn afternoon, there might be only one member in the audience.