BONNY REICHERT
CALGARY
Special to The Globe and Mail
Published June 8, 2012 Updated May 1, 2018

It's almost 6 on a windy spring evening, and Charcut is filling up. It seems early for a reservation, but a local has explained that Calgarians don't like to eat too late, especially when they're coming from work and there's an inviting place nearby.

There are booths and banquettes in the wood-and-leather dining room, but my seat is at the wraparound counter at the back, facing the chefs. I am close enough to hear the affable tone of their voices, if not everything they say. Soon the first dishes arrive in front of me – house-made mortadella with big chunks of pistachio and truffles, an iron pot of bubbling raclette cheese, a glass of Prosecco.

This is… Calgary? When I was a kid growing up in Edmonton, Calgary was our sister city and our rival. We had the University of Alberta, they had the corporate offices. We had the Oilers, they had the Flames. We had Klondike Days, they were in love with the Calgary Stampede.

With much respect to my restaurateur father, I would say neither city was a fine-dining destination. I mean, it was Alberta in the late seventies. We ate beef – ground, grilled, roasted, broiled and even corned. Maybe a bit of chicken or turkey. Escargot when we were very fancy. Fresh fish when we stepped way outside the box.

Today Calgary is a bustling city of more than a million people, with Canada's highest average pay ($65,121 per employee in 2010) and lowest provincial personal income tax rate (a flat 10 per cent). Calgarians are young, hard working and hungry for great food. Their toques are happy to oblige.

Back at Charcut, the menu feels both contemporary and nostalgic with its thick pork chop, juicy steak and even escargot. Chef-owners John Jackson and Connie DeSousa are native Albertans, but they are serious innovators, too. Consider their Alley Burger concept, which began by bringing hungry customers to the restaurant's dimly lit back door for $5 pork-and-roasted-garlic burgers in the dead of winter. Or Charcut's January pop-up collaboration with Toronto offal master Grant Van Gameren and local baker Aviv Fried (who delivers his artisanal loaves by bike). Alley Burger is now a busy food truck, and another pop-up is in the works for fall. These are the kind of culinary adventures that encapsulate the zeitgeist of the city – casual and collaborative, for sure, but also ambitious as hell.

After deep meaty dreams in my comfy bed at Hotel Arts, I'm up early the next morning, pulling on my cowboy boots. I'm off to the ranch run by Canadian Rocky Mountain Resorts, where the hotel and restaurant group raises buffalo and elk for their properties in and around the city. The half-hour drive is just long enough so I can work my way through a box of maple-bacon, Valrhona (a French gourmet baking chocolate) and salted caramel doughnuts from downtown's Jelly Modern. (At least they're minis.)

The ranch is a serene, soul-filling affair, with rolling hills and big skies. Veterinarian Terry Church oversees the care of about 600 animals, some of which he has bottle-fed from birth. "People always ask me how I can take care of them so well, and then send them off to their date with destiny," he says, stroking a buffalo cow's nose through the chain link fence. "We just give them the best life they can have. That's what I'm here to do." A few minutes later, I'm in the Ranch store, inspecting the lean buffalo and elk cuts for sale from the deep freeze. Church picks up a package of jerky from the display and hands it over. Yes, eating house-cured buffalo a few metres from the livestock feels a bit insensitive – but the jerky tastes wonderful.

Back in town, it's time for a beer. Not that I'm hot or anything. Since arriving in Calgary, I have seen rain, hail and the kind of wind that turns your umbrella inside out. Never mind. The sun is finally coming out as Jim Button of the Village Brewery strides up to me. Showing me around brings out Button's boyish enthusiasm, but make no mistake: He and his Village partners have lots of experience under their cowboy belt-buckles, a combined 140 years, in fact. "We wanted to feel the fun and excitement of a small startup again," he says. And it has been exciting. Village makes three craft beers – a white beer with orange and herbal notes, Village Blacksmith, a potent and chocolaty India black ale, and Village Blonde, a golden ale that is crisp, fruity and super quaffable. No wonder Button's team can't keep up with demand.

The next morning, a little fresh air is in order. After returning from the brewery, I had enjoyed a perfect martini at Raw Bar in Hotel Arts, then a fine, multicourse, wine-paired dinner at Rouge restaurant. Time to clear the cobwebs. I've already explored downtown's 17th Avenue and cool Kensington, so I happily check out artsy Inglewood, where I find Knifewear, spectacularly well stocked with Japanese blades, and Silk Road Spice Merchants, which is both an aromatic and a romantic experience.

Eventually my appetite comes back – but perhaps something light? Back in the day, fresh seafood in Alberta would be a non-starter. But wait! This is the new Calgary. And truly, the fresh oysters at Catch – Raspberry Point, Sawmill Gold and all their aquatic friends – are sweet and briny and beyond reproach. As I toss 'em back, I comb the award-winning wine list and marvel at the variety. My sister city is so grown-up, I'm not sure I even recognize her. But one thing hasn't changed. Calgarians still think their town is just a little bit better than yours. And maybe it is.

You get a good feeling when you walk into the lobby of Hotel Arts in downtown Calgary. The décor is contemporary but not cold, with a vertical stone fireplace, wood beams and original art. Lots of it. In fact, the hotel boasts a collection of 60 original pieces of glass, sculpture and painting spread over its 12 floors. Hotel Arts also features a pretty outdoor pool heated year-round, and an award-winning lounge and restaurant called Raw Bar. Signature cocktails include the Morello Kilauea, a shaken potion of espresso, house-made grenadine, morello cherry and Canadian spiced whisky. Rooms are comfortable and well appointed, if a bit dark. (119 - 12th Ave. SW.; 403-266-4611; hotelarts.ca. Rooms from $369.99.)

We’re going to the Stampede, but want a hands-on ranch stay. Suggestions? 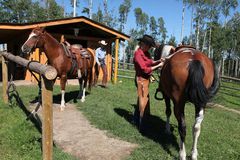 Let your spirit run wild at the 100th Calgary Stampede 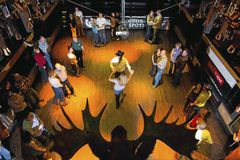