"What is this, some sort of health insurance card? I need government ID," barks the intimidating doorman outside Lake Effect, Salt Lake City's hottest cocktail bar.

I'm 34 years old, balding and haven't been carded in years, but it's been a constant on this trip to Utah, and having quickly learned that locals can't find the birthday on my Ontario licence, I decided to try something new by handing over my health card. Unfortunately, universal health care seems even more confusing to Americans, so I quickly apologize, switch back to my licence and hope for the best.

Earlier that day, outside the huge Gothic-style Church of Latter Day Saints temple that stands at the centre of the city's downtown core, I came face to face with another gatekeeper. Sister Squires cut a much less imposing figure than the bar bouncer I'd later meet a couple blocks away, but when the church volunteer in her early 20s informed me only Mormons with a "temple recommend" are allowed to enter the temple, I knew I'd have to remain on the outside looking in.

Not only am I not Mormon, but I was in town to sample Utah's homegrown drinking scene – and Mormons don't drink.

About 60 per cent of Utah's population identifies as Mormon, and the church's enormous influence on the political sphere has long led to tough liquor laws. Until last summer, the so-called Zion Curtain law even forced restaurants to install opaque glass partitions at their bars to block the view of alcoholic drinks being mixed and poured. Today, state laws still control the amount of alcohol in certain drinks: Cocktails can technically only have 2.5 ounces of alcohol and only 1.5 ounces of any particular spirit, and draft beer is limited to 4-per-cent alcohol by volume.

Despite these legal roadblocks and a majority of the population who abstain, a surprising scene of cocktail bars, craft brewers and distillers, has recently popped up to serve both the other 40 per cent and the many visitors who come to ski and enjoy the state's other outdoor draws, such as its red rock canyons and striking desert vistas.

Finally granted entry into Lake Effect, I scan the extensive cocktail list and opt for the Remember The Maine – featuring rye from local favourite High West Distillery along with absinthe, cherry heering, cherry brandy and vermouth. At some other spots in town, I found drinks that were oversweet or diluted, but this is as good, and as strong, as any back in Toronto. In part, that's because Lake Effect – as with a number of other local bars – takes advantage of a quirky provision in the cocktail laws that allows it to push past the 2.5-ounce limit by adding up to an additional 2.5 ounces of "flavouring" in the form of lower-proof spirits such as the cherry brandy and vermouth.

"Utah's weird, but every state has rules," says Chris Barlow, the distiller and co-founder of Beehive Distilling, as we discuss those cocktail laws at his new distillery location in South Salt Lake the next day. "And as far as manufacturing, Utah's easy."

Barlow and his partners came to distilling after being inspired by the success of High West, which began operations as the state's first distillery since prohibition in 2006. High West's widely celebrated blended whiskies are now distributed across the United States and there's still no better spot to warm up after a day on the slopes than its original Park City microdistillery and saloon.

Beehive became just the third licensed distillery in Utah when it began operations in 2013 and the first to make gin since 1870. "We started for pennies, we didn't have all the nice stuff," Barlow says of his start in a small space near the Salt Lake airport. But Beehive's signature Jack Rabbit Gin – characterized by its distinct rose petal finish along with spicy notes from sage and grains of paradise – has become so popular that the distiller is soon set to move into a much larger facility that will bring both a drastic increase in production and plenty of space for visitors to sample Beehive's wares.

Now, competition is growing, with at least nine active distillers operating in the state. One recent entrant to seek out, West Valley City's Waterpocket Spirits, is even focusing on obscure amaros and herbal liqueurs – pushing the limits yet another step further in Utah's historically teetotalling market.

On the brewing front, there's long been a history of local brewpubs producing and selling beers of 4-per-cent ABV or lower, but legislation passed in 2008 allowing the sale of beers with higher alcohol levels direct to consumers from brewery stores spurred a craft brewing renaissance, with Salt Lake's Epic Brewing leading the way.

The showstopper here is Big Bad Baptist – an imperial stout flavoured with coffee and cocoa nibs, and finished in whisky barrels, which is rated a perfect 100 by RateBeer and is so rich it might be best served as dessert. Along with a wide range of other brews spanning many styles, Big Bad Baptist is available for purchase at the popular on-site store, or for sampling in what's billed as a "tapless tap room," poured from the bottle as law requires since it clocks in at about three times the legal draught limit.

Thanks to quality brews such as this, both Epic and the local craft-brewing market have grown exponentially. One of the most popular newer entrants, Salt Lake's Fisher Brewing, is actually a historic brewery reopened last year by the original owner's grandson. A visit here can feel oddly like stepping through a portal to Brooklyn with rotating food trucks providing snacks and a lively crowd from day into night, but it's a fun spot to spend an afternoon resting muscles sore from skiing or hiking outside the city.

With this burgeoning scene of craft brewers and distillers, it's now easier than ever to find a good drink in Utah.

Bustling bars begin to feel familiar, and après-ski drinks flow as in any other mountain destination. But leaving Lake Effect, I find a stark reminder that as a drinker, I'm still in the minority here.

Glancing past the surprisingly large crowd waiting to get inside, I look up and come face to face once again with the golden statue of the Angel Moroni that crowns the temple just a couple blocks away – perfectly perched to keep watch over the downtown bar scene. 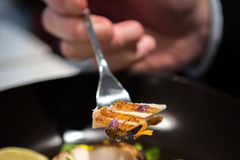 Recipe: Fresh Spritz of Bel Air
July 26, 2017
London’s Lobby Bar takes patrons on a journey with virtual-reality cocktail
May 18, 2017
Follow us on Twitter @globeandmail Opens in a new window
Report an error Editorial code of conduct
Due to technical reasons, we have temporarily removed commenting from our articles. We hope to have this fixed soon. Thank you for your patience. If you are looking to give feedback on our new site, please send it along to feedback@globeandmail.com. If you want to write a letter to the editor, please forward to letters@globeandmail.com.
Comments are closed