Most visitors to Barcelona come to enjoy the tapas and the beaches, to gaze in wonder at Gaudi’s architecture and Picasso’s art, to promenade on the Ramblas or shop on the Passeig de Gracia. But for those with an interest in political or literary history the city has another side, hidden from the view of the average tourist. For Barcelona was the place where one of the most important political writers of modern times learned what he was writing for, and against.

The year 1937 found George Orwell in Spain, fighting on the Republican side in the Civil War against Francisco Franco’s Nationalists. While on leave in Barcelona, the capital of the northeastern Spanish region of Catalonia, he was caught up in a nasty round of street fighting between leftist factions. The experience shook him, helping shape what would become his most famous books: Animal Farm and 1984.

To get a close-up feel for the drama of those days, I signed up for a tour of Orwell’s Barcelona. I’m a lifelong Orwell buff who ripped through all his stuff in my 20s. Joining me (or humouring me) were my wife and three children, aged 14, 21 and 24. All but my 14-year-old daughter had been to Barcelona before, so they were willing to try seeing the city through a different lens.

Our guide was Alan Warren, an English expatriate and civil war buff with baggy pants and a pencil moustache that is, perhaps not by coincidence, much like Orwell’s. We made arrangements to meet him at the Café Zurich on Plaça de Catalunya, one of Barcelona’s main squares. 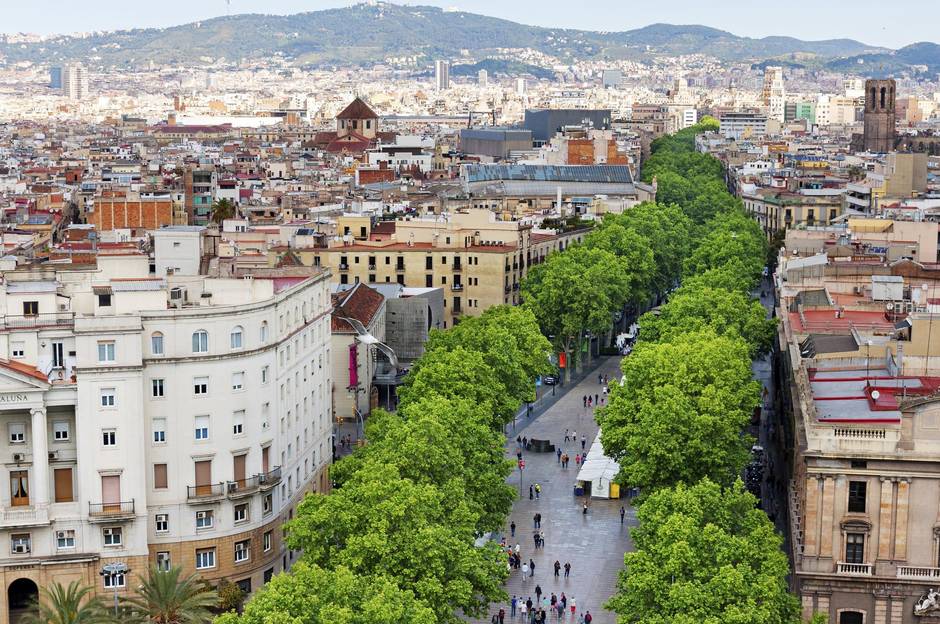 Most of the places where Orwell spent time in Barcelona are still there – all of them on or near the Ramblas, the city’s famous central avenue. (Pere Sanz)

After talking us through the outline of Orwell’s stint in the city, showing us photographs and newspaper clippings from the time, he led us on a three-hour walk that took in all the landmarks of the little war within a war that influenced the writer so deeply. Though Mussolini’s Italian air force bombed Barcelona during the Civil War, destroying many buildings, most of the places where Orwell spent time are still there – all of them on or near the Ramblas, the city’s famous central avenue.

When he first came to Barcelona, Orwell was inspired by what he saw. Parties of the revolutionary left had taken control of the city. Their colours and banners flew from every big building. A feeling of brotherhood was in the air. “Waiters and shop-walkers looked you in the face and treated you as an equal,” he wrote in his vivid war memoir, Homage to Catalonia. “It was the first time that I had ever been in a town where the working class was in the saddle.”

When he returned in the spring, after several miserable months at the front, things had changed. Old class divisions had reappeared. “Fat prosperous men, elegant women and sleek cars were everywhere.”

Tension between left factions was growing. The Communists, backed by Stalin’s Russia, which had intervened in the civil war on the Republican side, were gaining power. The Anarchists, a powerful force in the city for years, were on the wane.

The fighting started on May 3. “About midday,” Orwell wrote in Homage, “a friend crossing the lounge of the hotel said casually: ‘There’s been some kind of trouble at the Telephone Exchange, I hear.’ For some reason I paid no attention to it at the time.”

It turned out that government troops had moved against the Anarchist forces that controlled the exchange, a strategic outpost in the heart of the city. The Anarchists rose up in response, tearing up the cobblestone streets to build scores of barricades. The Communists, who were nominally allied with the Anarchists against Franco, but were in fact their bitter rivals, seized the opportunity to try to break the Anarchists– an independent force of the left, unbeholden to the Kremlin, that they could not abide. 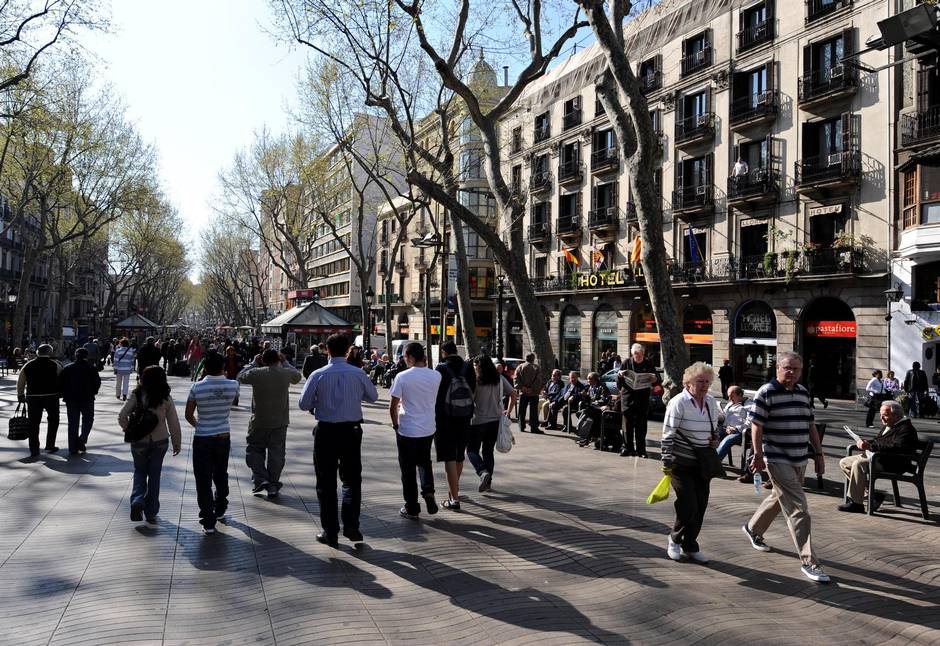 While in Barcelona, George Orwell spent most of his time along the Ramblas, the city’s famous central avenue. (Jasper Juinen/Getty Images)

Warren took us first to the telephone exchange. As he told us, government forces are believed to have attacked it in part because the Anarchists who controlled it were listening in – and sometimes interrupting – as high officials talked to each other on the phone. “We have more interesting things to do than listen to your stupid conversation,” one of them said when he broke in on a conversation between the president of the Spanish republic and the president of the Catalonian regional government. They were not amused.

Our next stop was the grand old Hotel Continental, where Orwell’s wife, Eileen, stayed during the troubles. When police rousted her room, looking for evidence that Orwell was some kind of subversive, she was lying in bed, and the police, perhaps out of some remaining sense of chivalry, never searched in or even under it, though they seized many of his books and papers.

A little way down the Ramblas, Warren showed us the former cinema where Orwell was stationed during much of the fighting. Unlike many foreigners who came to Spain to defend the Republic, Orwell did not sign up for the famous International Brigades. Instead, he found a place in a Marxist revolutionary party, known as the POUM after its Spanish acronym. So when the fighting in Barcelona started, he made his way down the Ramblas to the POUM headquarters to the sound of crackling rifle fire and the “snap-snap-snap” of storekeepers drawing down their metal shutters.

He was eventually sent to the roof of the cinema to stand guard. Orwell had little to do but wait for something happen, and spent much of his time reading Penguin Library books while the sound of sporadic gunfire came up from the street. 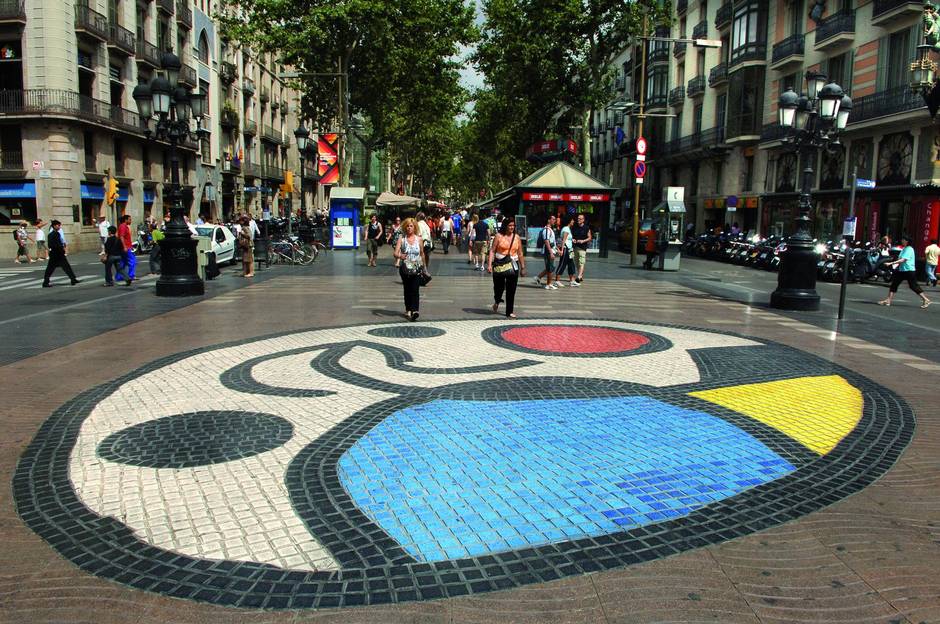 “I was in no danger, I suffered from nothing worse than hunger and boredom, yet it was one of the most unbearable periods of my whole life. I think few experiences could be me more sickening, more disillusioning, or, finally, more nerve-wracking than those evil days of street warfare. I used to sit on the roof marvelling at the folly of it all.” He had come to Spain to fight fascism and found himself instead in the midst of a bewildering feud on the Republican side that could only give comfort to Franco.

Amid the madness, there were moments of humour and bravery. Across the street from Orwell’s perch, Spanish government civil guards had built a barricade of mattresses on the roof to keep an eye on the Anarchist position. There was an informal agreement between the two groups not to fire on each other, but one day, amid the general confusion, the civil guards opened up. When the shooting died down, the two sides agreed it was all a misunderstanding. “Have you got any more beer left?” Orwell shouted across to his supposed adversary on the rooftop opposite. “No, it’s all gone.”

A little while earlier, a friend of Orwell, John McNair, risked his life and crept down the Ramblas in the dark to deliver a couple of packs of Lucky Strikes to the tobacco-starved Anarchist holdout. “I shall not forget this small act of heroism,” wrote Orwell. “We were very glad of the cigarettes.”

The building where the civil guards encamped, the Café Moka, is still there, under the same name but thoroughly modernized now. A few steps away stands a Subway sandwich restaurant, a sign of how much the Ramblas has changed in recent years as tourists throng to explore Barcelona. Along the street stands the giant food market, the Boqueria, where Orwell stopped to grab a wedge of goat’s milk cheese to tide him through the fighting. It was about all he and Eileen would have to eat in the coming days.

It was just as well we had Warren to guide us. There are few markers or memorials to Orwell’s time in the city, or to the civil war for that matter. Many Spaniards have tried their best to forget the war, which ground on for three years and claimed hundreds of thousands of lives.

A small plaque at the public library on the Ramblas commemorates Andrés Nin, the POUM leader who was arrested and killed following the “May Days” in Barcelona. A few blocks off the Ramblas, another stone plaque marks the Plaça de George Orwell. Warren notes that when drug dealers and other ne’er-do-wells started making trouble in the square, authorities put up Barcelona’s first CCTV security cameras there. The writer who dreamt up Big Brother would have appreciated the irony. 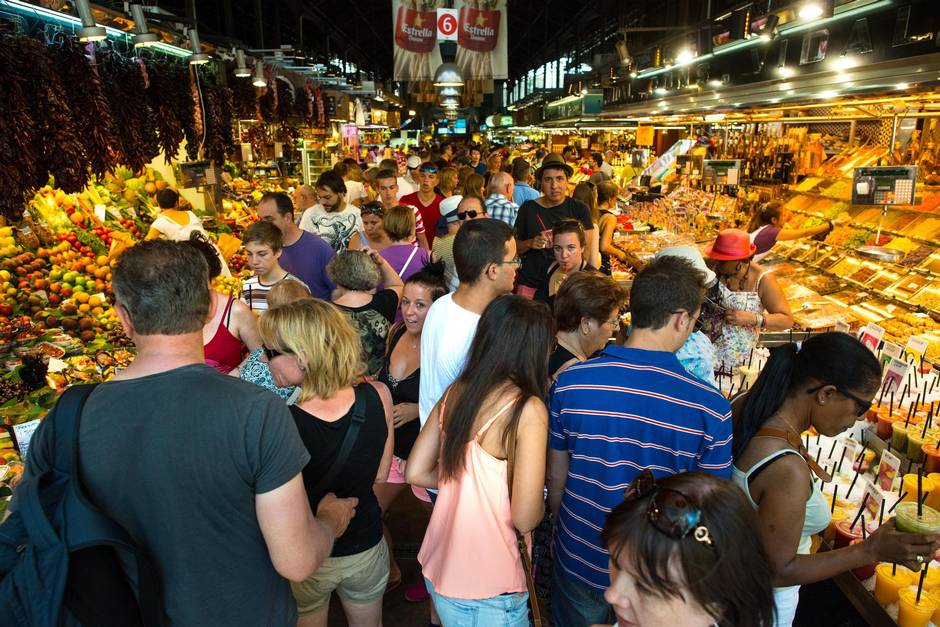 Along the Ramblas stands the the Boqueria, where Orwell once stopped to grab a wedge of goat’s milk cheese to tide him through the fighting. (David Ramos/Getty Images)

Orwell left town after the fighting, returned to the front and was promptly wounded – shot in the throat by a sniper’s bullet. Coming back to Barcelona, he found a fearful, haunted place. The government had banned the POUM. Its leaders were being hunted down one by one, accused of betraying the Republican side. Many were tortured and killed. His comrade Bob Smillie died in prison. Orwell himself found he was a marked man. When he went to the Hotel Continental to meet Eileen on June 20, she pulled him close and whispered, “Get out.” It was the first he had heard of the purge.

He and Eileen managed to escape into France just ahead of the secret police. “To think that we started off as heroic defenders of democracy and only six months later were Trotsky-Fascists sneaking over the border with the police on our heels,” he wrote.

The experience marked him. One biographer, Jeffrey Meyers, says that “Orwell’s half year in Spain was the most important experience of his life.” In his book Why Orwell Matters, Christopher Hitchens writes that, “In Spain, he had seen Stalinist frame-ups and falsified denunciations at first hand.” Barcelona was where he “suffered the premonitory pangs of a man living under a police regime: a police regime ruling in the name of socialism and the people.”

And yet for all the killing and treachery that Orwell witnessed, it did not crush his spirits. “Curiously enough the whole experience has left me with not less but more belief in the decency of human beings.” In Barcelona, he had seen glimmers of a better world. “For several months large blocks of people believed that all men are equal and were able to act on their belief. The result was a feeling of liberation and hope … No one who was in Spain during the months when people still believed in the revolution will ever forget that strange and moving experience.”

Today’s Barcelona is so orderly, prosperous and European that it’s easy to forget what happened not so very long ago. Retracing Orwell’s footsteps offers a glimpse into a time when the people saw the Revolution unfold, then tear itself apart. 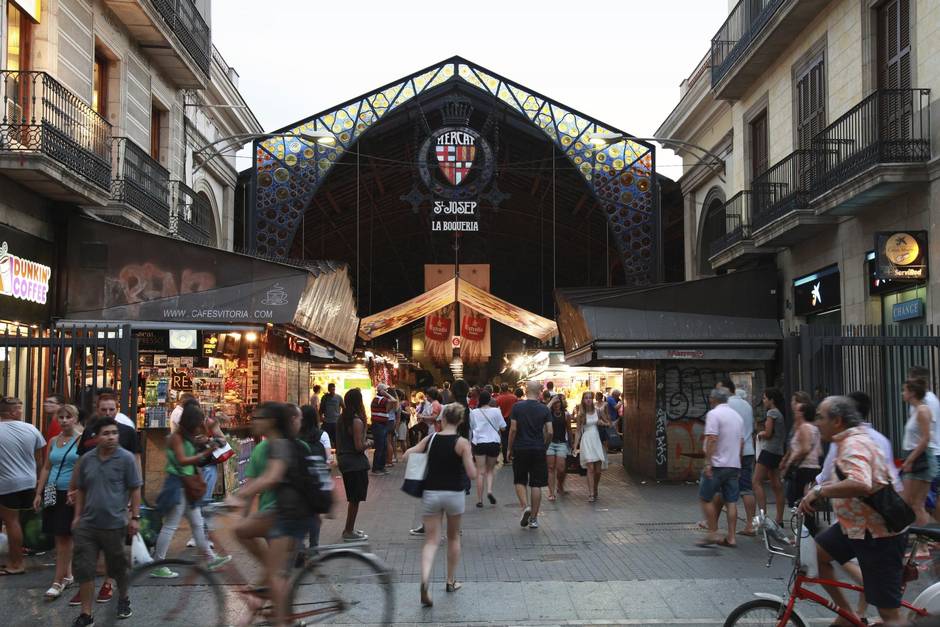 Alan Warren offers three- to four-hour George Orwell tours of Barcelona. He charged my family of five €125 ($185). Reach out on e-mail to organize your own tour at pdlhistoria@gmail.com.

Café Moka: Orwell wouldn’t recognize the place, but the café is a good place to refuel. 126 Las Ramblas; moka.es

La Boqueria: There’s a lot more to buy than goat cheese. Make sure you leave time to soak in the sights, sounds and smells of historic market. 91 Rambla; boqueria.info

Hotel Continental: This three-star hotel is still run by the same family who hosted Orwell and his wife several times. Located at the top of Las Ramblas, it’s a good central spot to use as a home base. Rooms from €75. 138 Las Ramblas; hotelcontinental.com

Editor's note: The original version of this article incorrectly said the POUM was anarchist, when it is better described as a Marxist revolutionary party. This version has been corrected.