As anyone who has been to Santorini or Mykonos in the high season knows, strolling the overcrowded lanes can feel like negotiating a stampede at a soccer stadium. Those islands are indeed beautiful, but these lesser-known regions are just as alluring. 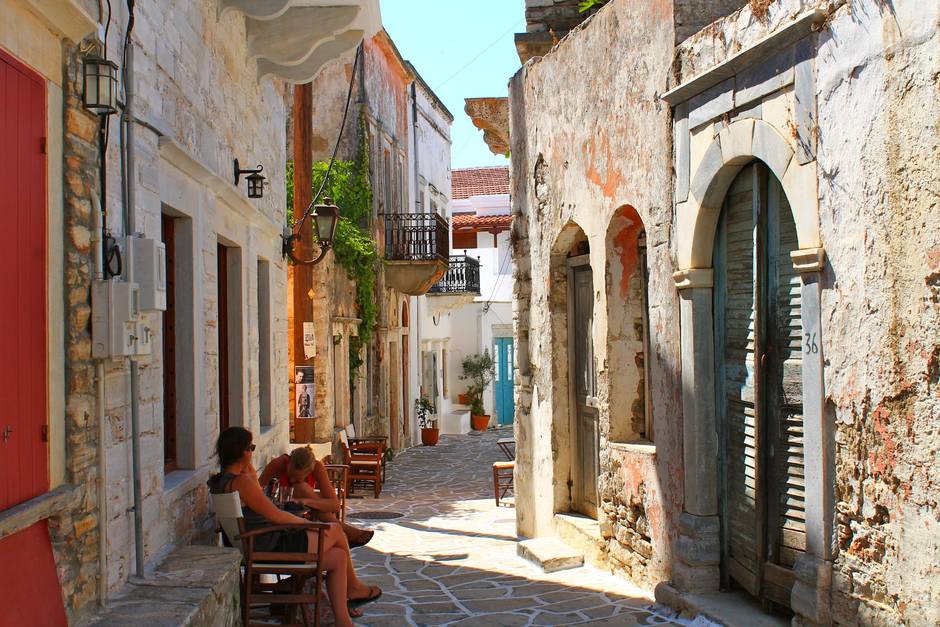 When the beach becomes tiresome, head to interior Tragaea region of Naxos and explore the lively village of Halki. (Elizabeth Warkentin / Alexander Reichardt)

The Traghea Valley of Naxos

The largest and greenest of the Cyclades, mountainous Naxos feels more authentically Greek than its glitzier siblings, Santorini and Mykonos.

Noteworthy for its stunning Byzantine churches, millennium-old olive groves, ancient kouros statues and an excellent network of walking trails, the Traghea Valley is the ideal area for hiking enthusiasts.

And, if the Traghea Valley is the crown of Naxos, then the bougainvillea-clad neoclassical village of Halki, sprinkled with arty boutiques, stylish cafés and an enchanting village square, is the cabochon stone in that crown.

After a morning hike up to Mount Zas (Zeus), have lunch at one of the many tavernas in the lively and leafy main square in Filoti.

For a less strenuous ramble, walk the Byzantine church-dotted trail between the villages of Moni and Halki, after which you can stroll through this gorgeous village, visit the Fish & Olive art gallery (fish-olive-creations.com) and sample kitron, the local liqueur made of citron, which resembles a large, carbuncled lemon or grapefruit, at the Vallindras Distillery (www.greeka.com) right across from Fish & Olive. 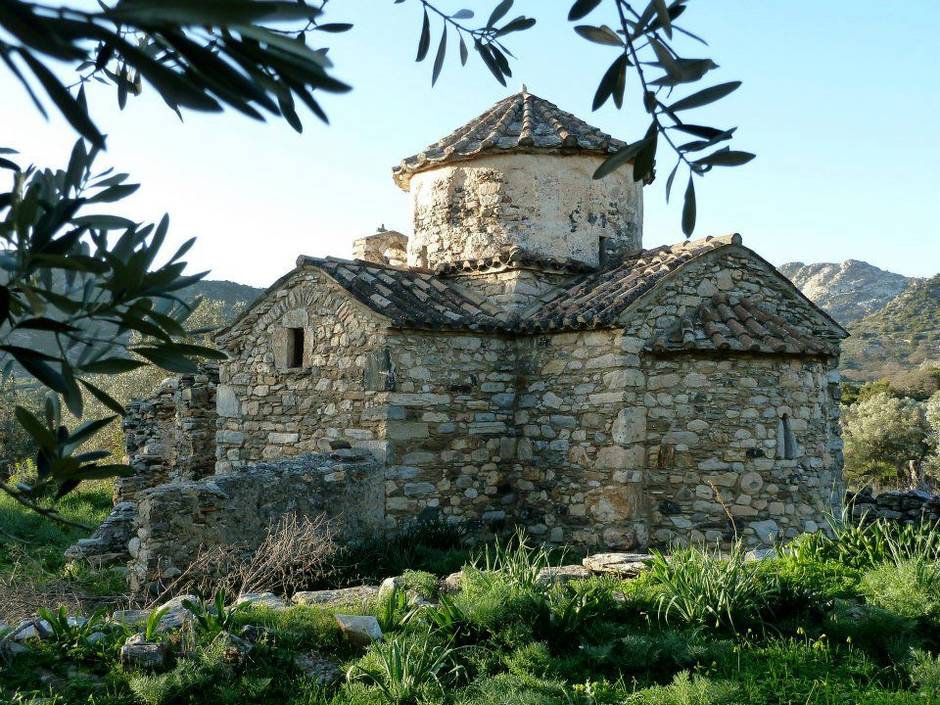 Vasiliki Guest House. A lovely guest house in a restored traditional mansion just outside the village of Filoti (enaxos.gr).

Il Basilico, Halki. Owned by an Italian couple from Milan, this popular Italian restaurant is set in a lovely garden. The cuisine is highly innovative and the chef creates a new dish made with fresh, local ingredients every day.

Duetto, Filoti. Authentic local cuisine is served in a welcoming atmosphere on the leafy main street of Filoti.

Galani Kafenion, Halki. With its original Grecian blue double doors and rickety marble-topped wooden tables, this friendly café is in a 1950s time warp. It is famous for its homemade galaktoboureko, a semolina-based custard in phyllo pastry. 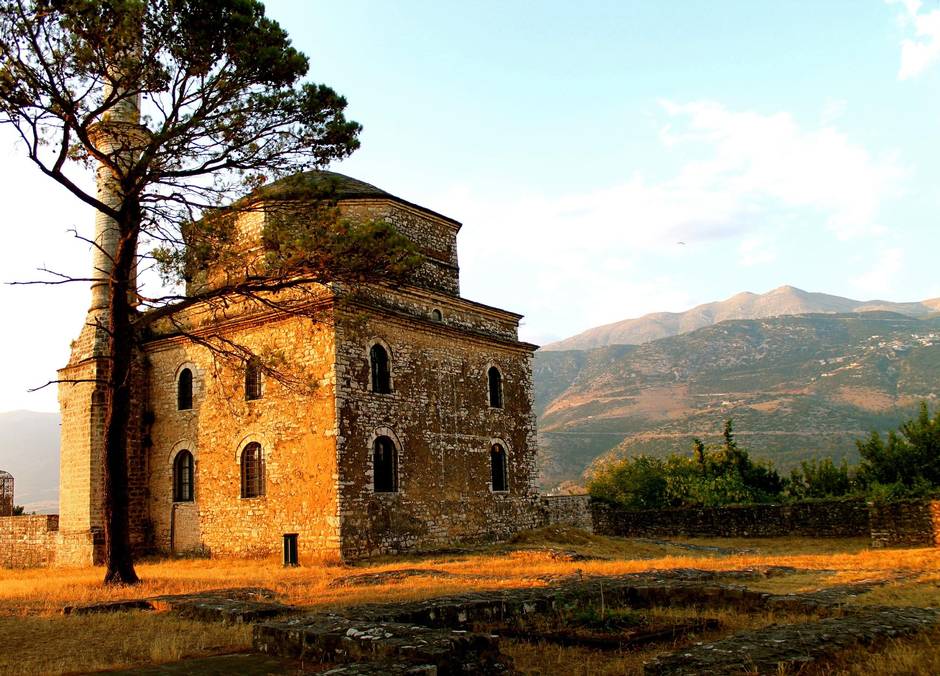 From shimmering lakes and ice-cold rivers spanned by Lord of the Rings-style stone bridges to the world’s deepest gorge; from the unspoiled Ionian coastline of long, sandy beaches to the Zagorohoria, 46 traditional mountain villages strung around the gorge like pearls on a necklace; and from Ioannina, a lively university town dripping with Ottoman riches, to clifftop Byzantine churches and monasteries – it’s no wonder Lord Byron was awed by this forgotten corner of northwestern Greece.

With its dreamy views of the supernaturally green Lake Pamvotis and the surrounding Pindus mountains, the Its Kale compound is Ioannina’s Byzantine-era citadel, which serves today as the Byzantine Museum. The compound contains the palace of former Ottoman ruler Ali Pasha, who was buried here beside the Fethiye Mosque. Just a 10-minute ferry ride across the lake from Ioannina lies a small, forested island that is home to 300 inhabitants, as well as five secluded Byzantine monasteries notable for their fine frescoes and manuscript collections. For walking and hiking enthusiasts, the Vikos Gorge and the Ottoman-style villages of the Zagorohoria make for some of the best walking in Greece. The Instagram-worthy stone bridges that span the mountain rivers and waterfalls are a highlight for many travellers. Also worth visiting in the Zagori are the monasteries, some, such as the Monastery of Saint Paraskevi at the entrance to the gorge, clinging high up the sheer rock walls towering over the void below. 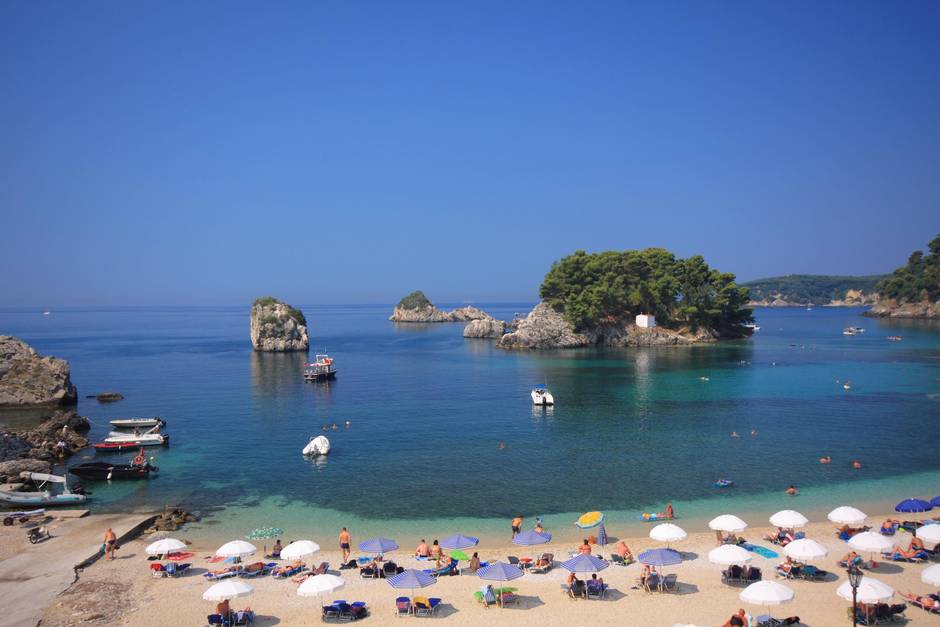 Parga, in the Epirus region of Greece. (Getty Images / Hemera)

Gaia Guest House (www.gaia-dilofo.gr), Dilofo. A modern guest house built from the ruins of an 1862 stone mansion off the main square is managed with comfort in mind – there are board games, arty magazines, a mini-library, a cozy breakfast room and a fireplace in the living room. The owners also help to organize walking, rafting, kayaking and other activities. Doubles start at $80.

Restaurant of Nikos and Ioulia Tsoumani (www.tsoumanisnikos.gr), Papigo. After a hike in the Vikos Gorge, gorge on zimaropita (Greek pie), salads and hearty local dishes and wash it down with tsipouro (pomace brandy) and local wine at this well-loved taverna.

Mystagwgia (www.mystagwgia.gr), Ioannina. Set in a traditional stone mansion, this stylish taverna and tsipouradhiko (ouzerie) is popular with locals for its mezedhes (small dishes) and grills. 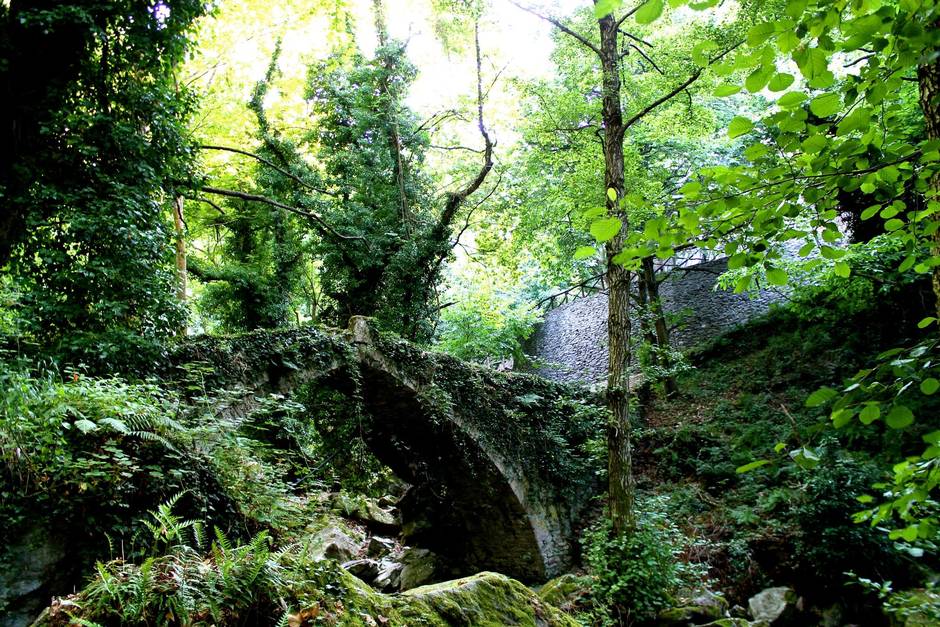 The verdant interior of the Pelion peninsula is a mythical forest of chestnut, oak and eucalyptus. (Elizabeth Warkentin)

The peninsula is formed by a dramatic mountain range. Its more scenic but difficult-to-access eastern flank is characterized by high cliffs that plunge into the sea, with a number of secluded coves and beaches reachable only by boat or via steep staircases. Pelion’s verdant interior is a mythical forest of horse chestnut, oak, eucalyptus and walnut trees interspersed with ice-cold streams and waterfalls. Nothing seems to have changed in the woods since the centaurs, winged horses and nymphs gamboled here.

Vertiginous mountain roads offering sweeping views of the sea are interrupted by villages typified by leafy, sun-dappled squares and half-timbered houses, many often adorned with overhanging balconies and the ubiquitous vidrio, or stained-glass, windows. 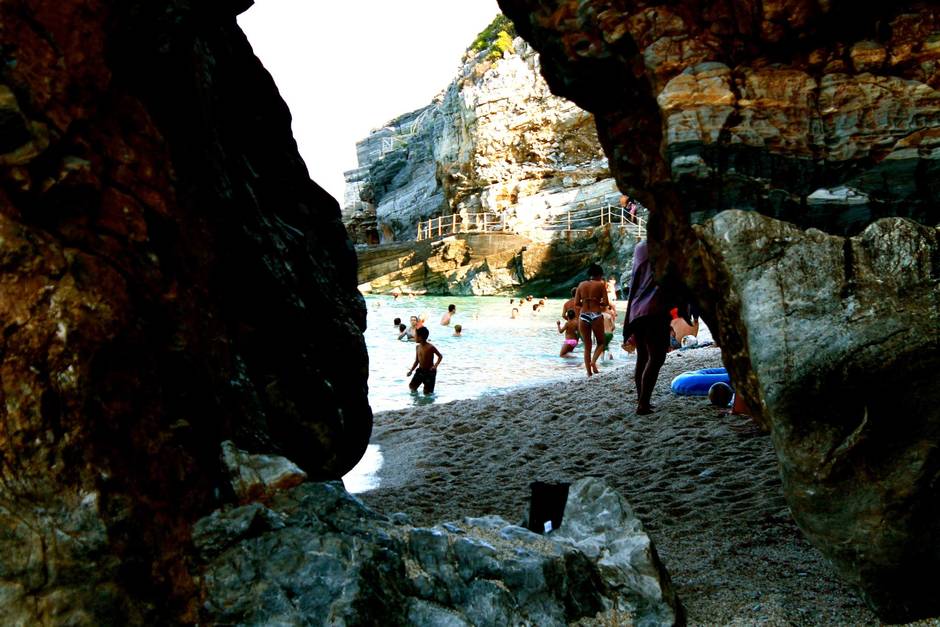 The Mylopotamos beach on the Pelion peninsula. (Elizabeth Warkentin)

The peninsula is only 95 kilometres long, but driving its coiling roads can be torturous. It’s often faster and safer to walk the kalderimia, the donkey tracks that connect many villages and beaches. Walking these cobbled paths, you’re sure to come across a Byzantine-era church since these are often secluded in the woods. Some of the prettiest and best preserved mountain villages in Pelion include Tsagarada, Milies, Kissos, Lafkos and Portaria.

Coastal villages such as Agios Andreas and Kottes are a throwback to 1970s Greece, right down to the ramshackle taverna tables and chipped wooden fishing boats. Undoubtedly one of the most beautiful and dramatic beaches on the peninsula is Mylopotamos, which can be reached by boat or by a steep wooden staircase situated a few kilometres below the village of Tsagarada, but those with young children might prefer the beach at Kato Gatzea. For something touristy yet different, To Trenaki (www.trainose.gr/), the little train, is a popular four-carriage train that runs between Ano Lehonia and Milies.

Santikos Mansion (www.santikoshotels.com), Vizitsa. Santikos is an arhontika, a traditional mansion home converted into a hotel, with panoramic views from its stained-glass-windowed veranda. Richly decorated doubles with nice bathrooms start at $130.

Archontiko Stathopoulou (www.archontikostathopoulou.gr), Aghios Georgios. Housed in a grand neoclassical mansion with frescoed ceilings, the villa boasts a flagstone terrace from which you can appreciate the panoramic views of the coast and an ice-cold spring-water swimming pool. Its friendly managers, Dimitri and Thessalia, are always ready to help, and Thessalia bakes killer cakes and spinach pies. Doubles start at $125.

Dipnosofistis (www.dipnosofistis.com), Tsagarada. An elegant restaurant that also operates as a wine bar in the summer, it has a forested wooden deck that is a lovely spot to taste Greek vintages to the accompaniment of jazz music.

Plymari at Analipsi beach. The trip to this beachside taverna, where everything, from the garden-grown salad to the homemade spinach pie, is fresh, is worth it. 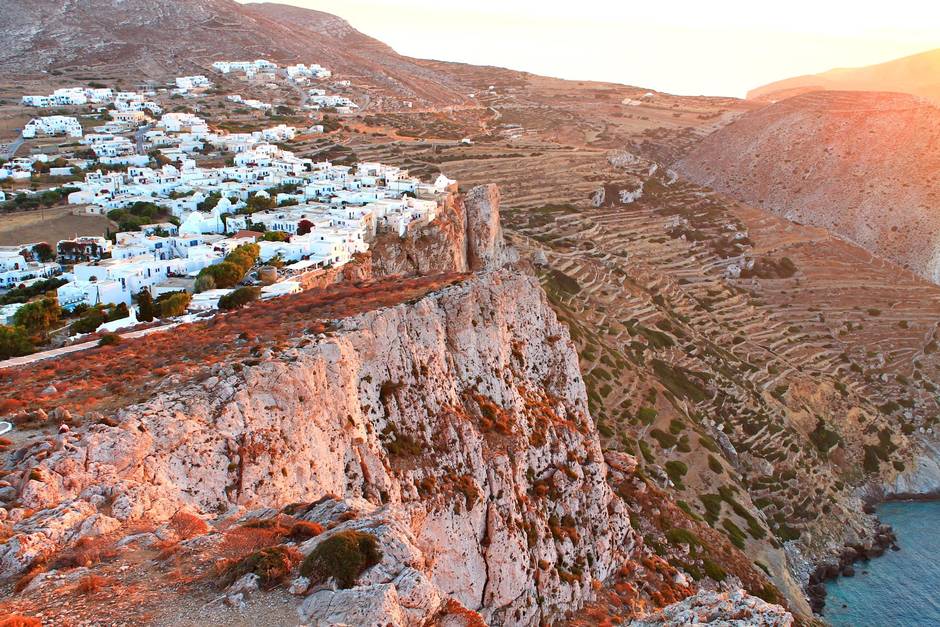 There’s little to do on this off-the-beaten-path little island of Folegrandos, and that is the key to its charm. (Elizabeth Warkentin)

A former penal colony for political exiles until 1970, this remote 13-by-4-kilometre island of only 670 permanent residents feels like stepping back into the unspoiled Cycladic paradise of the 1970s and 1980s. With its whitewashed capital that clings atop a steep rock cliff overlooking the Aegean and green and white flagstone lanes lined with whitewashed doll-size homes, Folegandros may look like Mykonos and Santorini, but the similarities end there. 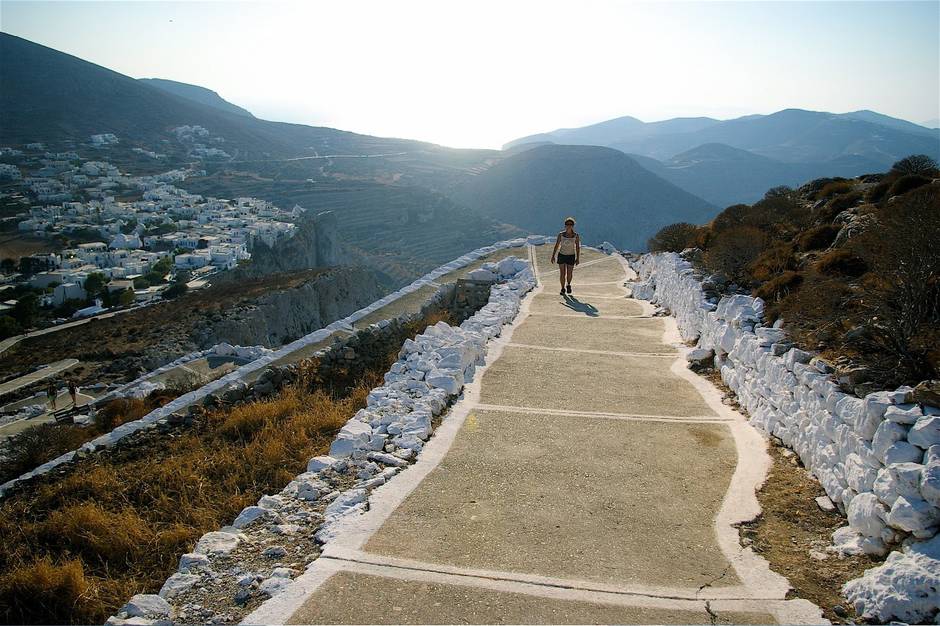 A photo from September, 2008, shows the path to Panaghia church above Chora on Folegandros, a Greek island in the Aegean Sea. (Marc Levy / AP)

Actually, there’s little to do on this off-the-beaten-path little island and that is the key to its charm. Your days will probably be filled with treks to the Church of the Virgin up the steep switchback donkey path to watch the sun rise or set; a ride on one of the island’s two buses to the village of Ano Meria at the other end of the island; lazy afternoons on secluded beaches, some accessible only by fishing boat; a relaxing boat trip around the island; or languorous lunches in one of the five interconnected squares, especially bewitching at night when the lights strung through the trees set the village aglow.

Anemomilos Apartments (anemomilosapartments.com). This is the classic Cycladic hotel: sugar-cube studios, enviable pool, seaside restaurant terrace, friendly owners and chic blue and white rooms with whitewashed balconies, some extending seamlessly out over the rocky abyss and the azure sea. Double studios start at $220.

Hotel Antheia (https://antheia-folegandros.com). At the entrance to the village, this pretty little hotel has tasteful, comfortable and spotlessly clean rooms with outstanding service from the lovely Romanian couple who manage the place. Doubles start at $60. 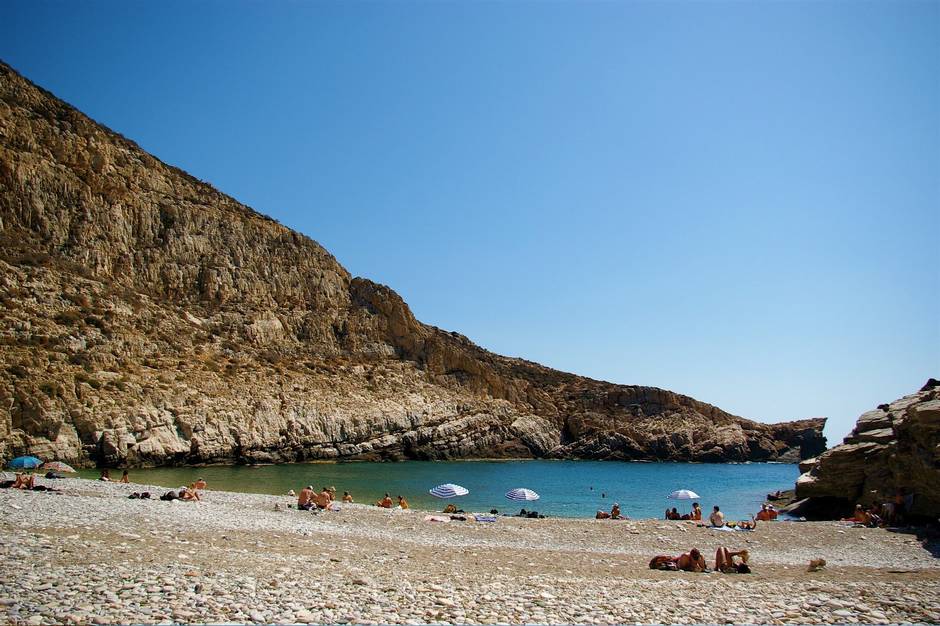 Mimi’s, Ano Meria. Owned by a charming family, Mimi’s is famous for its matsata (a local homemade pasta) and cheese pies. 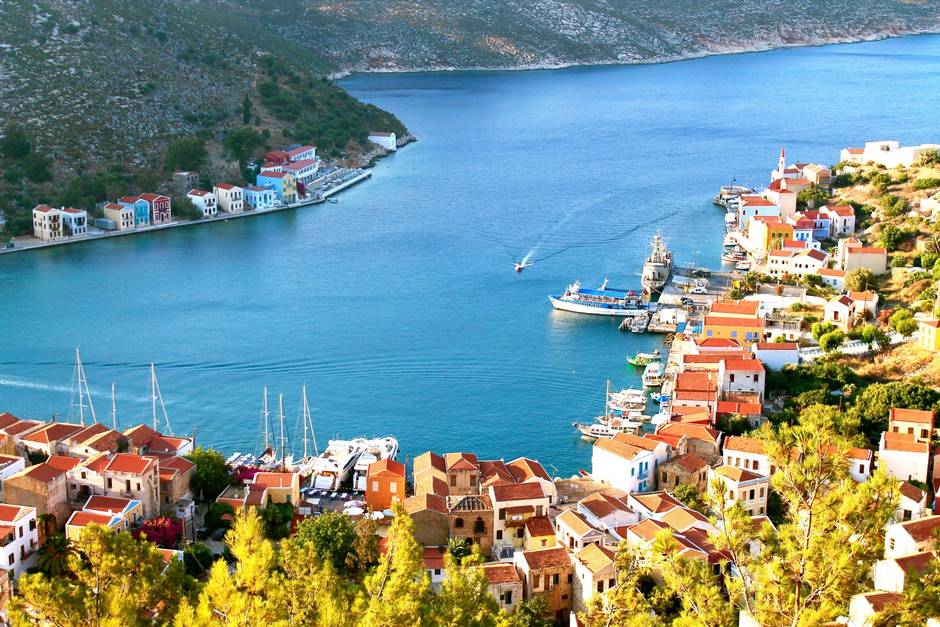 It’s hard not to feel excited upon docking among the brightly coloured neoclassical buildings lining the horseshoe-shaped harbour of Kastellorizo. (Elizabeth Warkentin)

One can’t help but feel the excitement of a child on Christmas morning upon docking among the Skittles-coloured neoclassical buildings lining the horseshoe-shaped harbour of Kastellorizo. This tiny Dodecanese gem was once home to wealthy merchant sailors and their families, its harbour then considered the best between Beirut and Piraeus. After the First World War, the collapse of the Ottoman Empire and an economic demise worsened by a tragic earthquake, the island’s 10,000 or so inhabitants were forced to emigrate, mostly to Australia. Today, many of the Australian descendants of these emigrants – “Kazzies,” as they’re affectionately known – are returning to reclaim their property and heritage and invest in the land of their ancestors. Only two kilometres from the town of Kas, on the Turkish mainland, the island is an intoxicating mix of Greek and Turkish influences.

There are no beaches on the island, but you can swim in the harbour or have one of the water taxis drop you off at the swimming dock on Agios Georgios Islet. Lovers of grottoes will be awestruck by the Blue Cave, a surreal “underwater cathedral” that rivals Capri’s in height and width and wonder. Kastellorizo’s museum, housed in the old mosque in the harbour, is small but contains interesting displays and shows a moving documentary of the island’s tragic history. If you’re feeling more energetic, a walk up the 400 steps to the summit is tough on the knees, but the amphitheatrical view toward Kas in Turkey is definitely worth the effort, as are the encounters with goats in the fields and on the rocky plain on the way to the old monastery, which is being restored. Many locals and tourists take the boat to Kas on Fridays for the weekly market.

Mediterraneo (www.mediterraneo-megisti.com). The boho-chic boutique hotel has Turkish accents and a marvellous waterfront location right at the entrance to the harbour. Gorgeous print bathrobes, which French owner Marie Rivalant also sells in her boutique, are provided for swimming, straight off the terrace. Doubles start at $115.

Olive Garden. Australian Damien and his German wife Monika are affable owners serving a range of traditional Greek and international food in a cool and quiet setting away from the bustle of the harbour. They also run a guest house called Caretta and rent out apartments.

Lazarakis. This is a long-time favourite with locals and yacht owners who step straight off their boats into a taverna chair. Yorgos, the owner, who is the husband of Marie Rivalant, owner of Mediterraneo, offers home-cooked Greek dishes with a good wine selection.