After an hour of kayaking, I'm finally getting my bearings. The narrow channel ahead and rocky, arbutus and pine-covered islands match the chart on my deck.

"The campsite should be right there, in that cove!" I yell to my wife Claudia, who's paddling beside me. It's a brilliant day in late July and we're in the Copeland Islands, a few kilometres from the town of Lund, on British Columbia's Sunshine Coast, the gateway to Desolation Sound, a scenic waterway that attracts thousands of kayakers and yachties from around the world each year. We've just embarked on a six-day, self-supported kayaking trip and need a spot to pitch our tent each night, something I fear may be in short supply.

Suddenly, another pair of paddlers appears in the channel, headed toward the same cove. A sinewy couple in their late 60s, with dark tans, they paddle swiftly in brightly coloured boats. Although decades younger, we cannot catch up. They beat us ashore by a boat length.

"Hello, I'm Trudy," says the woman in a strong German accent, stepping out of her boat. "This is Yuli." Her partner offers a wave.

I ask where they've come from, expecting their last destination.

Our journey had begun the day before when we made the two-ferry, three-hour drive from Vancouver to Lund. En route, we stopped at Alpha Adventures in Powell River, an outfitter with whom we had prearranged a lesson and rentals. Our instructor Sam, a bearded, fit twentysomething, took us to the town beach, where we practised strokes and rescues for several hours. Finally he declared, "You're good to go." The next morning he arrived at our hotel in Lund with the boats and we shuttled my car to the other side of the Malaspina Peninsula for the return. Our route would circumnavigate the Sound.

Having done guided trips, I realized that, with a bit of planning, I could do it myself. Many others have made the same leap and the sport continues to grow in popularity. In response, the BC Marine Trails Network - neighbouring kayak camping areas stretching along the entire B.C .coast - was recently launched.

In the morning we say goodbye to Trudy and Yuli and head north, rounding Sarah Point and entering the Sound proper. My boat drifts over huge schools of white jellyfish, bald eagles perch on scraggly branches and seals bob beside us. We arrive at the Curme Islands by midafternoon and settle on the westernmost isle, our base for the next three days. We marvel at our blissful home, swim in the warm sheltered lagoon and retire to our tent.

As idyllic as it seems, when Captain George Vancouver sailed to Desolation Sound on a rainy summer day in 1792, he wasn't impressed and departed leaving the miserable misnomer. Today the 8,449-hectare provincial marine park is anything but desolate. It's home to sea lions, harbour seals, orcas and numerous sea birds. The deep, glacier-carved fjords also have some of the warmest waters on the West Coast, and can reach over 20 C in the summer.

We spend the next two days exploring the Sound. Paddling into Prideaux Haven, a postcard inlet set against a backdrop of snow-covered Coast Mountains and one of the most popular anchorages in the area, we count nearly 100 yachts; many are jaw-droppers. Floatplanes buzz overhead, delivering guests and supplies. I feel like I'm invading an exclusive club, and expect a stocky doorman in a skiff to arrive and ask us to leave. We explore West Redonda Island, hike to a warm inland lake to swim, and visit an offshore rookery of some 50 sea lions; they heave up onto their pectoral fins as we pass.

Each day our island becomes less private. First a commercial group of 13 kayakers arrives, then another group. There are some two-dozen people and 15 tents on the tiny outpost. We decide to leave.

Paddling along the Gifford Peninsula under a gunmetal sky, the wind whips up and waves crash over our bows. A side-on swell nearly capsizes me. We haul our boats up on a barnacle-covered beach below a dense forest and wait for calm. Then, improbably, an older man and his young son pass by in a skiff and offer us a lift in a larger boat, which is moored nearby. We load the kayaks and are soon steaming through one-metre swells. We part ways at Grace Harbour, a protected inlet with a pretty campsite near the end of our journey, and thank him profusely. We will paddle out tomorrow, but tonight we have the place to ourselves.

Getting there It takes two ferries to get to Lund, 120 kilometres north of Vancouver ( bcferries.com).

Stay If tenting isn't your style, rooms at the waterfront Lund Hotel ( lundhotel.com) start at $130.

For those new to sea kayaking who want to try a self-supported, overnight trip in a less remote area, Buccaneer Bay Provincial Park, at the southern tip of North Thormanby Island, on the southern Sunshine Coast, has a lovely beach and basic camping facilities and is a great place to learn. Halfmoon Sea Kayaks ( halfmoonseakayaks.com), located in the luxe Rockwater Secret Cove Resort, can provide equipment rentals and lessons ( rockwatersecretcoveresort.com). 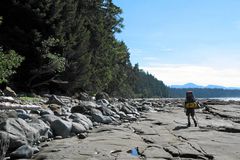