It’s a warm evening in Kilauea, a small beach town on the north shore, and the sun is just starting to set. Hand-painted signs along the road guide us to a grassy area behind a historic stone building, where a large crowd has gathered under pink-streaked skies and twinkly string lights. It’s Art Night, a monthly festival featuring live music, local artisans and trendy food trucks. Lineups for pulled-pork sandwiches and fresh fish tacos snake around groups of young families and friends stretched out on blankets listening to the band. It’s a scene you’d expect to stumble upon in a hip urban neighbourhood rather than a far-flung island in the middle of the Pacific – and it’s exactly the sort of thing that’s attracting younger travellers to Kauai and redefining its appeal beyond a nature-lover’s paradise.

I heard about Art Night from Jenny Mason, founder of Kopa Kauai soaps. I first met Jenny at the Westin Princeville resort, where she sets up a soap stand on Fridays. “You have to go to Art Night if you like this stuff,” she tells me after I compliment her gorgeous hand-crafted soaps. “This island draws a certain type of person, and Art Night is all about young creative people.” 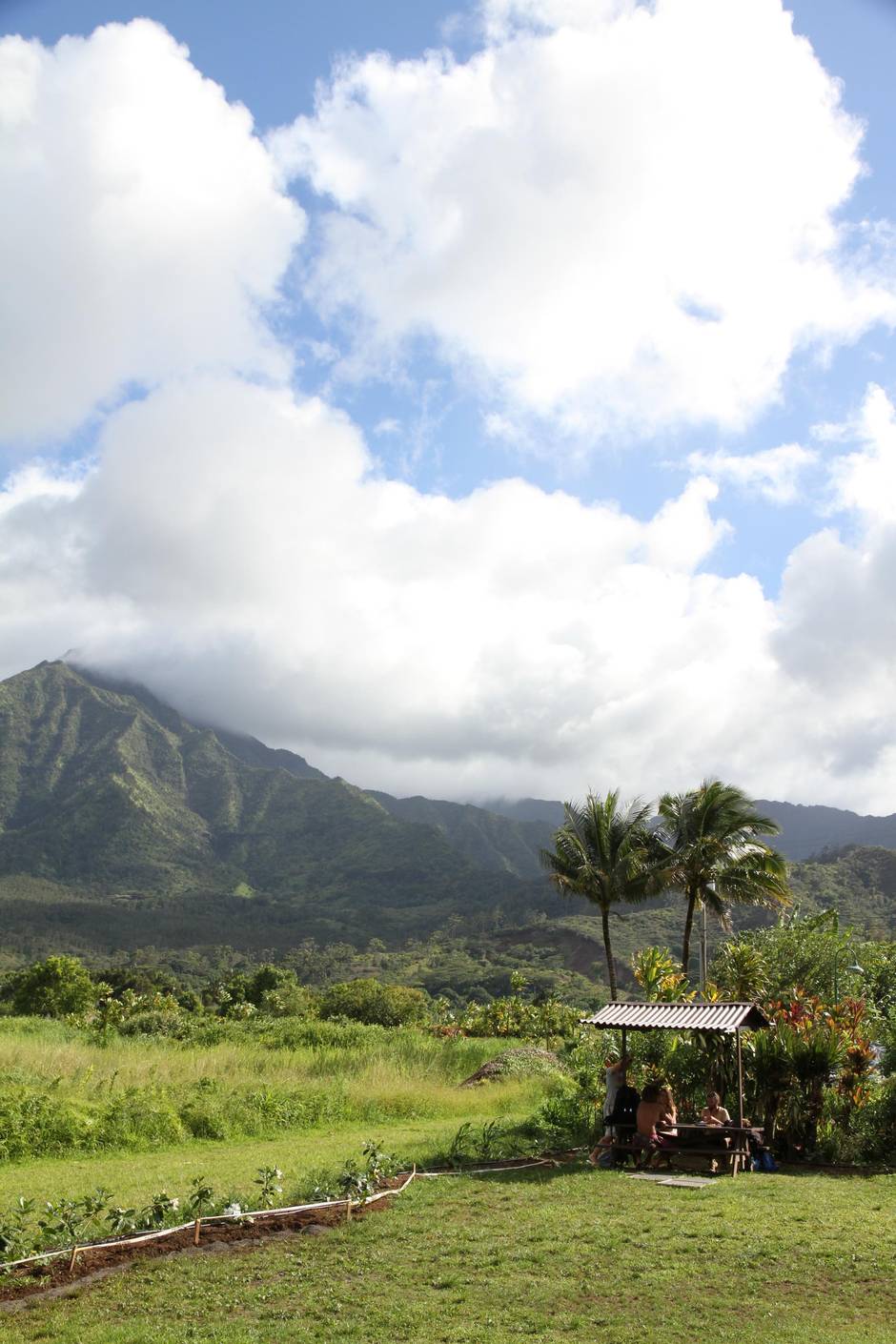 Picnic with a view: Roadside stands and food trucks in Kauai lead to some truly stunning outdoor meals. (Photos by Russell Vance)

Her nearby soap studio is an oasis of calm in the busy Princeville area, which is filled with condos and luxury hotels. She inhales deeply while describing her bestsellers –there’s a soft-smelling sea-salt soap named after Hanalei Bay, the stunning crescent-shaped sandy beach by her home, and a brightly coloured orange-blossom bar that looks good enough to eat. Mason can hardly keep up with the demand for her soaps, which are shipped internationally and now sold in New York and Paris.

According to the Hawaii Tourism Authority, visitor arrivals to Kauai grew 7.3 per cent, to 98,782, in May, 2015, compared with the previous year. The number of day trippers from other islands, primarily Oahu, Maui and Hawaii (Big Island) also rose 19.2 per cent, to 11,539 visitors. The increase, particularly among younger entrepreneurs and travellers, may be partly attributable to the arrival of short-term vacation rental sites. A largely cost-prohibitive paradise traditionally perceived for honeymooners or retirees, Kauai has become a more affordable destination in recent years with private room rates as low as $125 per night on Airbnb. (It’s also attracting visitors and entrepreneurs both big and small – last year Mark Zuckerberg bought 283 hectares of land, joining fellow billionaires Steve Case, former chairman of AOL Time Warner, and James Jannard, founder of Oakley, who also have large properties on the north shore.) 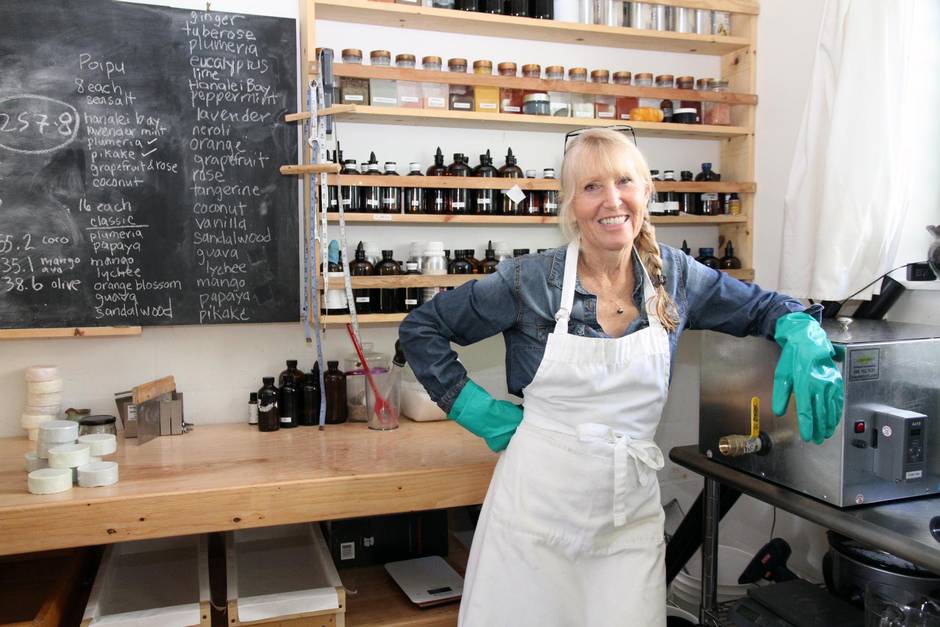 Jenny Mason's soap studio is an oasis of calm in the busy Princeville area.

Kauai, the geologically oldest and most northern Hawaiian island, is made up of countless towering waterfalls, lush rainforests, verdant valleys, pristine beaches and stunning mountain ranges. It’s home to Mount Waialeale, one of the wettest places on Earth, and the Waimea Canyon, known as the Grand Canyon of the Pacific. The vast majority of the island is inaccessible – 90 per cent by car and 70 per cent by foot – and yet, interesting little towns filled with great restaurants, shops and services have popped up along the coastline.

Kapaa is one of those towns. Cool coffee shops, tiny bars and charming boutiques are sandwiched between run-down restaurants and shabby playgrounds. It has that same energy and cool contrast of a neighbourhood on the cusp of gentrification. Kauai Juice Co., a sleek juice bar that looks as if it belongs on Toronto’s Queen Street West or Vancouver’s Main Street, is tucked behind a mini strip mall.

It’s owned by Kristal Muhich, a 30-year-old entrepreneur originally from Illinois, who fell in love with the island while visiting eight years ago. Her two retail locations in Kapaa and Kilauea serve up an impressive selection of cold-pressed juices, hand-pressed nut milks and flavourful kombucha teas. 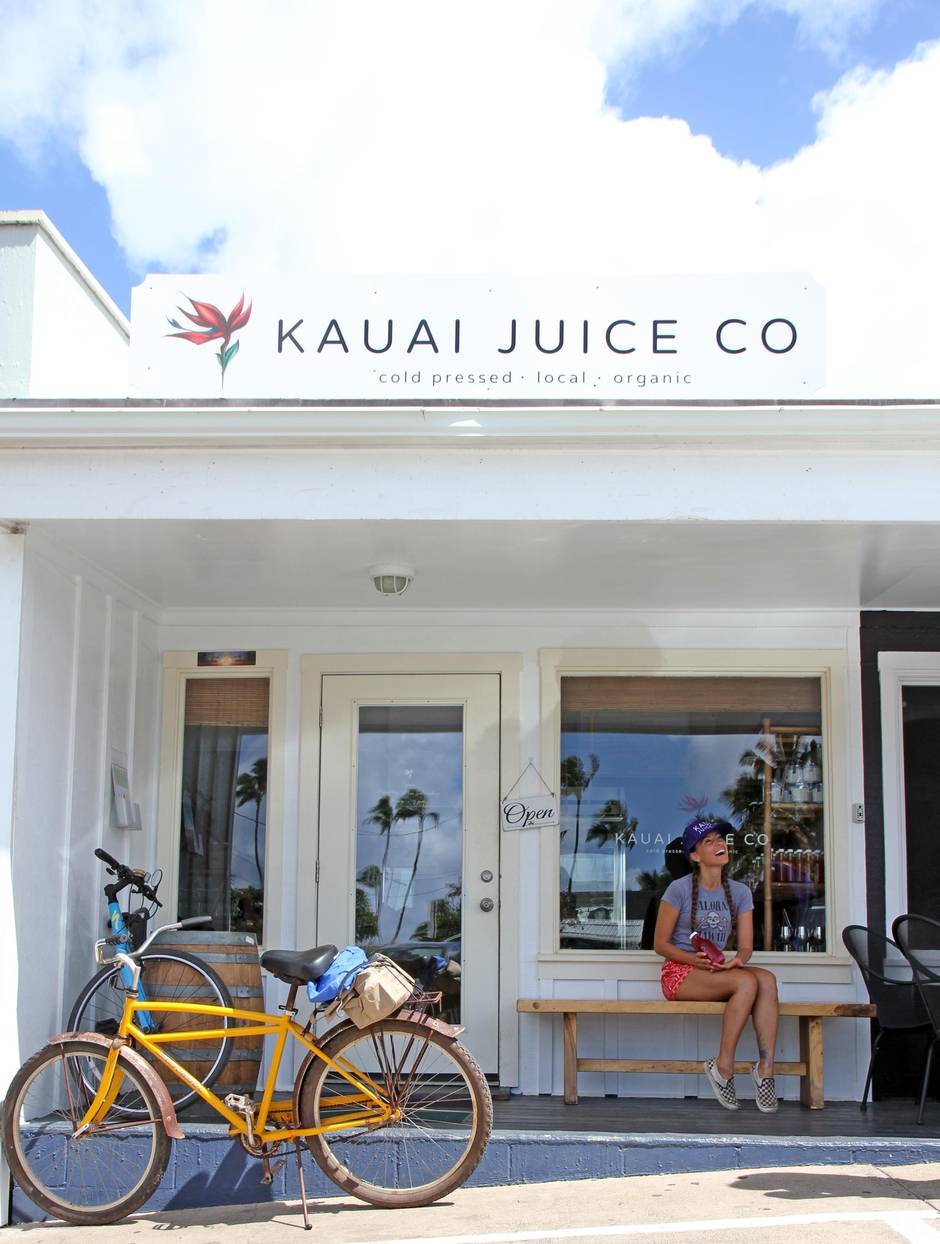 When I visited each location, the juice-slinging staff behind the counter was a group of stylish young women who seemed to be friends. “This island has a really strong and supportive feminine power,” says Muhich. “There are a lot of creative women who are starting their own businesses and building an artistic community here.”

Among the glass-bottled juices, you can also find Mahalo Skin Care products in the shop, a new artisanal skin-care line made with local ingredients, including papaya and hibiscus. It was launched last year after raising enough money from a successful crowdfunding campaign to produce the custom bamboo, laser-engraved packaging. Maryna Kracht, the 32-year-old Ukrainian native behind the brand, and her husband, Mark, who moved to Kauai from Detroit eight years ago, say there is definitely a growing population of hipster foreigners (mainland Americans are considered foreigners to Hawaiians) and no shortage of cool restaurants, bars and microbrands that are coming along with them.

Over coffee at a chic Hemingway-themed café, they tell me about a friend on the island who recently launched a handmade clothing label called KaiKini Bikinis, and another who is making raw honey products through her local company, McPhee’s Bees. “It feels like it’s just getting started,” says Kracht. “And it’s inspiring to see so many people coming together and creating things they love.” 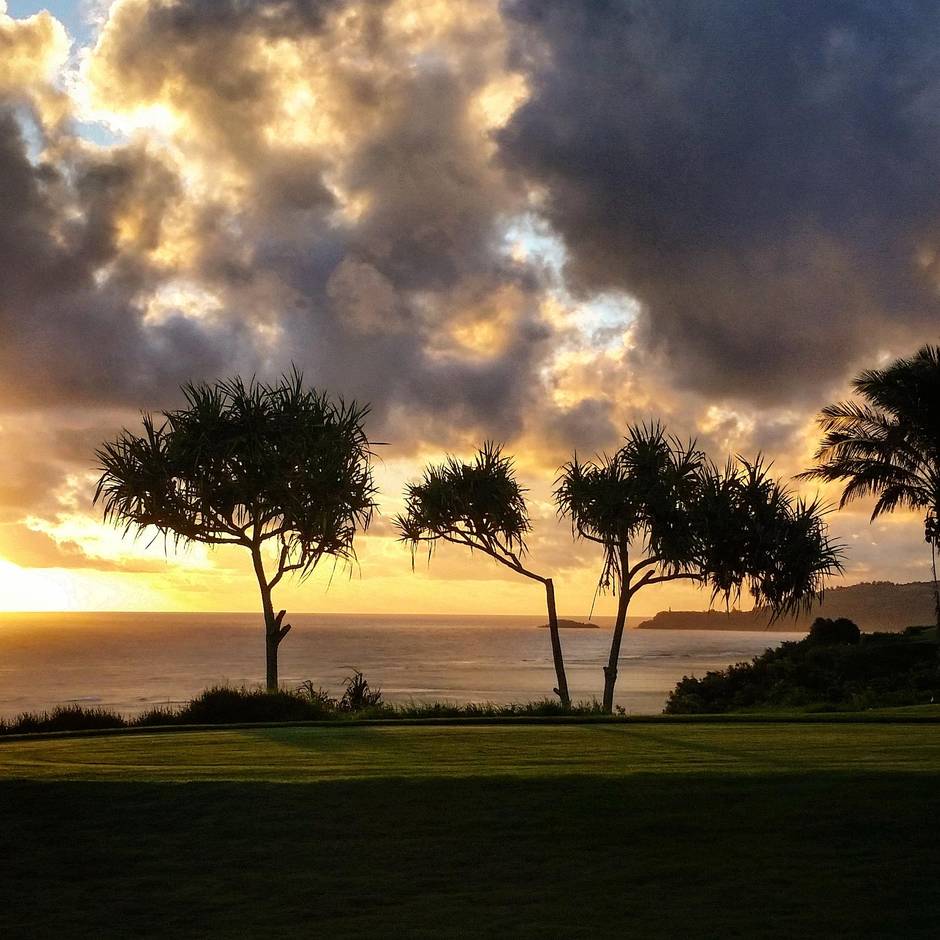 Kauai has become a more affordable destination in recent years with private room rates as low as $125 per night on Airbnb.

The Krachts generously give us recommendations for places to eat, sightsee and relax. The following day, we take a road through a fragrant tunnel of eucalyptus trees on the south shore in search of a restaurant the Krachts recommended.

When we pull over to admire one of the many lookout points along the road, we spend a few minutes chatting with another thirtysomething tourist.

“Have you been to Art Night yet?” he asks. We tell him how much we enjoyed our evening in Kilauea.

Apparently, there are two. We’re making it our next stop. 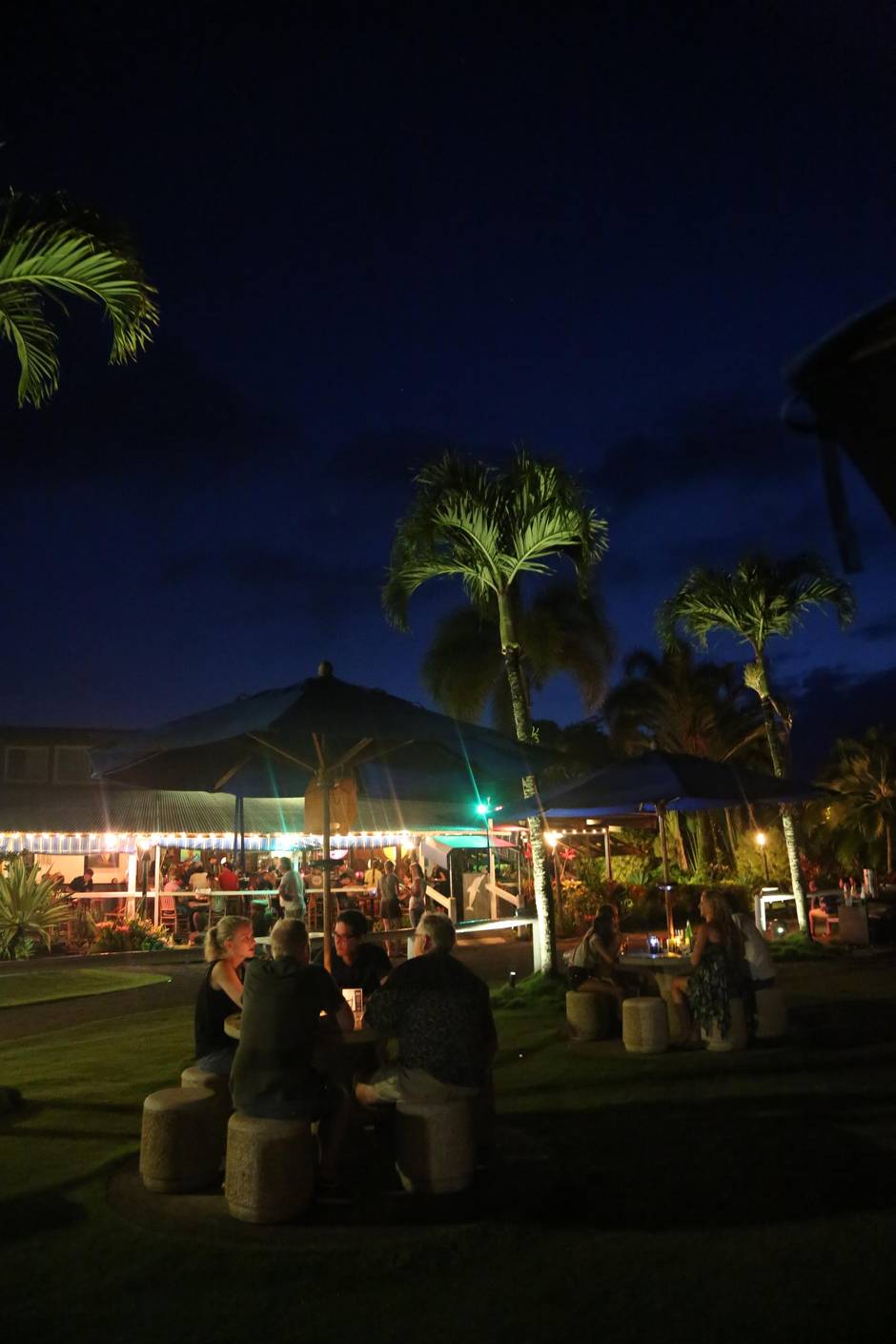 Tahiti Nui:This legendary dive bar gets rowdy, with the loudest music and strongest mai tais we found on the island. Plan to eat early, as the tables are removed to make way for the dance floor around 9:30 p.m. 5-5134 Kuhio Hwy, thenui.com

St. Regis Princeville:Skip the overpriced restaurants in this mega resort and instead enjoy a cold local beer at the bar, which offers the same sweeping ocean views. 5520 Ka Haku Rd., stregisprinceville.com

Kilauea Art Night:If you’re lucky enough to be in Kauai on the last Saturday of the month, don’t miss this event featuring local vendors, artists and musicians. The awesome burger at Kickshaws food truck is worth the 40-minute wait. kauaifestivals.com