During the 1300s, the papacy moved from Rome to the southern French city of Avignon. For decades, a series of popes, cardinals and clerics led lives of luxury in the fortress-like Palais des Papes overlooking the Rhône River - and after a split in the church, epic battles between kings and cardinals, the French papacy reluctantly gave in and returned home to Rome.

It's plain to see why the pleasures of Avignon might have looked better than those of the Eternal City. Provence and the city at its centre are lovely now as they must have been centuries ago. The Mediterranean climate supplies such abundant sunshine that fragrant, intense Gariguette strawberries are ripe by spring. Terra cotta-roofed farmhouses and limestone villages with towering churches punctuate the rolling hills. Olive groves and fields of sunflowers, golden rapeseed and lavender dazzle the senses. What's more, charming little hotels, bistros and the many excellent wineries of the Côtes du Rhône offering free tastings make a trip here eminently affordable.

A typical dinner at Thierry Piedoie, a rustic restaurant in Avignon with beamed ceilings and curtained windows, is quietly thrilling, with coral-hued crab bisque and fork-tender beef slowly braised in red wine from the Côtes du Rhône. Yet it is inexpensive, with local wine as little as $4 a glass.

The hotel across the street from where the popes partied - also called Palais des Papes - has rooms that start at just $117 for a double, including free Wi-Fi and continental breakfast (www.palais-des-papes.com). There's a medieval Provençal style to the guest quarters, with winding stone staircases and room keys affixed to lavender sachets. The medieval streets of Avignon require steely resolve to navigate in a car, but it's the fastest way to explore the region's villages and vineyards, which include the stunning, remote foothills where the famous dessert wine Beaumes de Venise is produced.

Travellers seeking a slower pace can book a barge trip down the Rhône River from Lyons to Arles. It's also common to rent bikes and cycle from village to village.

The main reasons for my visit, however, were the wineries of the Côtes du Rhône - there are more than 6,000. My friends and I are go-getters when it comes to wine, but we had to be reasonable in how many we could cover in a week. The wine region stretches along both banks of the Rhône for 200 kilometres, second in size to Bordeaux. We can thank the popes for contributing to the proliferation of vineyards, continuing a practice that began during ancient Roman times.

Côtes du Rhône is one of the wines I always gravitate toward ordering at restaurants wherever I am, not only because of its invariably plummy, food-friendly personality, but because it's often the least expensive.

On the way to our first winery, Château d'Or et de Gueules, in Saint Gilles, the buds on the vines were flowering and tall cypress trees bordered the vineyards and orchards. A grey horse placidly nibbled grass outside the tasting room, which also showcases rotating art exhibits. We sampled elegant, organic white, rosé and red blended from a range of grapes: chardonnay, cinsault, grenache, syrah, carignan and mourvèdre, ranging in price from $8.90 to $35.60.

We were in the Southern Rhône Valley, home of the legendary Châteauneuf de Pape, a wine that is usually out of my price range. We stuck to wineries where we could actually afford to buy bottles after the free tastings. In an effort to promote wine tourism - a relatively new phenomenon in Côtes du Rhône - several wine routes have been established, with maps available everywhere.

On the outskirts of Cairanne, an old village in the heart of Provence, is Domaine de l'Ameillaud, a beautiful estate encircled by vineyards and fields of purple irises. Mont Ventoux looms in the distance, the highest point in Provence and the last stage before Paris for Tour de France competitors this summer.

The winery has been in Sabine Thompson's family for 200 years and she and her husband, Nick, who is British, have run the property since 1983. They have turned the stables into airy, fully equipped apartments. For those who help during the harvest and don't mind getting their hands dirty in the vineyards, the weekly price will be reduced this fall.

The dryly humorous Nick, resembling Timothy Dalton during his turn as James Bond, led us through a sampling of his AOC rosé and red blends from 2007, 2006 and 2005. In varying degrees, they all exhibited full fruit and soft tannins, indicative of what I've always liked about Côtes du Rhône, a lack of pretension and a true expression of the region's pebbly clay and granite soils.

Within 20 kilometres of Cairanne is a necklace of charming ivy and rose-walled medieval villages, such as Sablet, Gigondas, Vacqueyras and Carpentras. Then there's Séguret, which clings to a hillside in such exquisite perfection it looks like it should be encased in a snow globe. Also worth a visit is Pont du Gard, an aqueduct built by the Romans that is a marvel of engineering and now a UNESCO World Heritage Site.

Gigondas, in addition to being famous for its wines, has singular ceramic shops and shaded outdoor cafés, such as Le Caveau des Gourmets. This bucolic lunch spot is owned and run by a co-operative of 80 local winemakers. Their tasting menus are an incredible bargain, featuring three dishes thoughtfully paired with three wines at a starting price of $20 to $24. The menu changes frequently, but there may be pistou soup rich with summer vegetables and beans matched with a strawberry-tinted rosé; grilled shrimp brightened by a glass of viognier, and farmhouse cheese served with a Gigondas red blend.

Inside the café is a chic shop selling local honey, tapenade, freshly harvested olive oil, glassware and a wide variety of the co-operative's wines.

While Le Caveau des Gourmets was top on my list of lunches, my favourite dinner was in Vaison-la-Romaine, settled by the Romans in the second century. The jasmine-scented, twisty, cobbled streets reveal poetic archways and blue shuttered windows hung with cascading flower boxes. Down the hill from our hotel, Le Beffroi, which consisted of two 16th- and 17th-century mansions that had been joined together, was the stylish, stone-walled Bistro du'O. Under a vaulted ceiling, we relished fat, white asparagus with a knob of foie gras, and quail served in individual cast-iron pots, along with well-priced, delicious bottles of local red from Domaine Roche-Audran and Domaine Chaume-Arnaud. I happily trundled back up the hill to bed, looking forward to a blissful night's sleep.

At midnight, I realized the significance of the hotel's name: Beffroi means "belfry." The church bells rang 12 times, then 12 times again. At 1 a.m., they gonged once, at 2 a.m., twice, and so on through the night, waking me each hour.

At 7 o'clock, they rang seven times, paused, then rang seven times again. Rather than lying in bed and dreading the 8 a.m. gongs, I got up and took an early-morning stroll through Vaison-la-Romaine.

I petted a darling little dog that had escaped from its master, and hiked up to the town's Roman ruins. On the way, I viewed an outdoor art project - vintage black and white photos of townspeople embedded in the stone buildings. The town's charms were so powerful that my exasperation vanished. I understood why the Provence-loving popes fought so hard to stay. 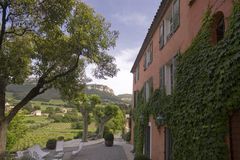