It’s late afternoon on an elevated plateau on Cape Breton’s sunset coast. Seabirds circle below our small group but still well above the deserted beach, which stretches five kilometres toward a distant headland. The freshest breeze arrives with ocean air and hints of bramble. Boats chug offshore as the sun begins its languid early summer slide into the Gulf of St. Lawrence.

This is a view that holds your focus. But as we stare out to sea, soaking it in, my wife pipes up from behind: “Wow. This hole is a monster.” She’s not a golfer, but even her attention is being drawn to the rugged, rumpled course at our backs, which is about to blow the lid off Canadian golf. Like this sublime place, Cabot Cliffs is a sight to behold.

The holes tumble down from a glade of tangled woods above the sea, in and out of dunes, along the Broad Cove River and over MacLellans Pond, skirting chasms and cliffs before depositing us on this plateau and the course’s final fairway. The bunkers and blowouts are rough-hewn, flowing seamlessly into humps and hollows, beach and meadow grasses, stands of tuckamore, even gypsum knobs unearthed along the way. The greens they guard are rollicking with a touch of wit, like the island and its people. Many of this game’s playgrounds are blessed by nature, but few embrace it so thoroughly and enthusiastically. It’s not just a golf course; it’s a celebration of Cape Breton.

Cabot Cliffs has been open for limited preview play just a few days. Its greens and fairways are still maturing, but it’s been compared with the world’s most stirring courses for years, since it was just sketches and stakes on that spectacular plateau above the gulf. Writers and golf insiders have been tossing around superlatives and speculating about the world rankings. Those lists are heavy on subjectivity and light on meaning, but for people who care about golf or tourism in Canada, this course is going to be a big deal for a long time.

If you haven’t seen Cabot Cliffs on a magazine cover or brochure yet, give it a few minutes. Most of these images will show the green of the par-three 16th green or the tee of the par-four 17th, which share a tiny, wind-swept promontory at the north end of the property. The postcard photos these two holes yield are dizzying – towering jagged cliff faces, precarious bunkers, endless ocean. It’s exhilarating golf, and these pictures are destined to speak as a sort of shorthand for the place. But every hole on this course has dramatic ocean scenery and things you’ve never seen before – every single hole. 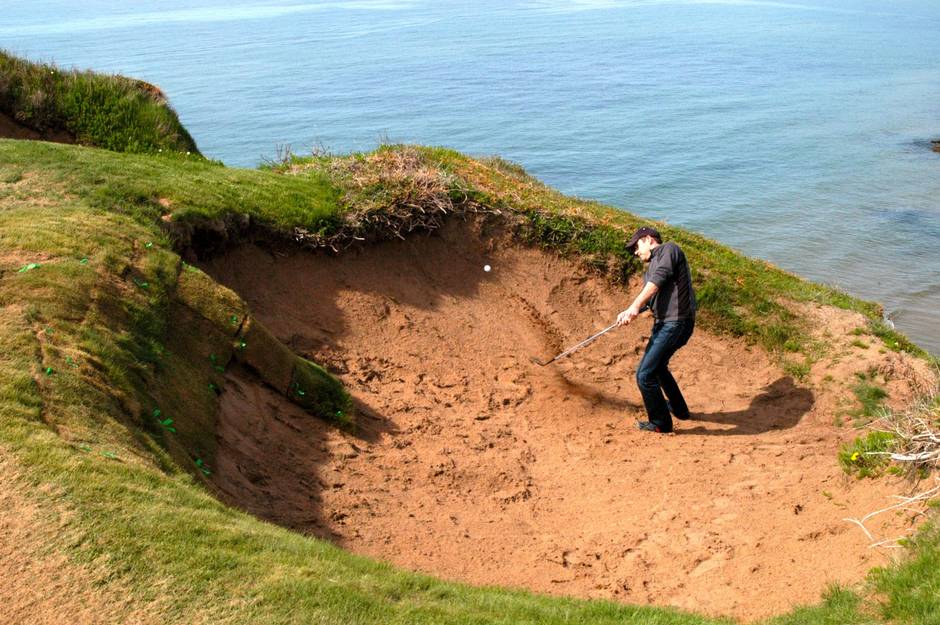 Even the bunkers, like this one on the 16th green, have sea views. Photo by: CHRISTINA VARDANIS

That doesn’t mean 18 holes of cymbal-crashing, though. Like many other supremely natural courses, Cabot Cliffs offers a journey with its own rhythm and character. Right from the start, it takes thoughtful inspiration from its location.

“Okay, we have this property,” Bill Coore, who created the course with partner Ben Crenshaw, says. “Can we create a golf course that will be a complement to that property? Because it is spectacular. It has very strong individual character.”

From the site of a future clubhouse, play proceeds down a broad expanse of fairway. It’s a “friendly handshake” opener, but at the green, the relatively benign par-five offers a glimpse of what’s to come. The unique putting surface resembles the half-shell of a scallop, its wavy edges paralleling the outline of Cape Mabou, a rounded highland directly in the line of sight beyond the town of Inverness. Coore confirms that this clever allusion was the work of his long-time friend and colleague, Canadian Rod Whitman, who offered to play a supporting role at Cabot Cliffs after designing its well-regarded sister course, Cabot Links. It brings to mind the artistry of another Canadian architect, Stanley Thompson, who drew inspiration from distant features at Highlands Links, his masterful “mountains and ocean” course two hours from here. 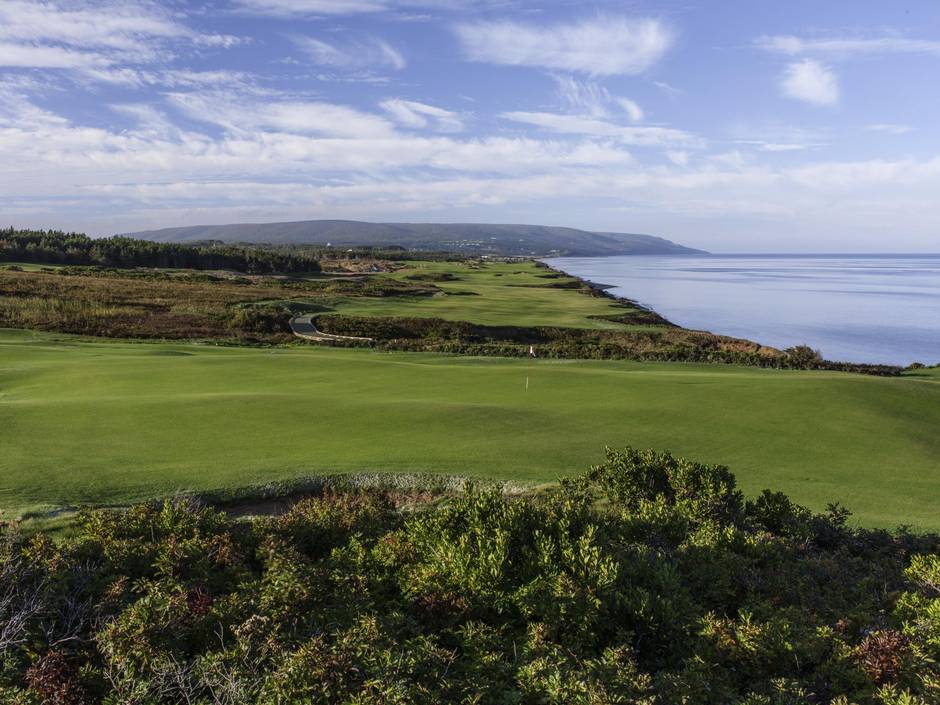 Do such touches constitute high art or parlour trick? Consider the amount of time, logistics, work and money required to uncover, route and gently massage them, which many retail players won’t even consciously notice. Eight years of thinking, planning and work went into Cabot Cliffs, and 18 holes of clever nuance are the result. “There was a lot of thought that went into that,” Coore says with satisfaction at mention of these little details.

The second hole at Cabot Cliffs requires less interpretation. It’s the kind of unique, visual hole that separates the great golf from the merely good. The central plateau abruptly ends with a tee atop a commanding bluff, a launching point for drives down into the dunes. Below, fairway and green are separated by a thin creek and a giant, hairy bunker that might bring to mind the famous “principal’s nose” hazard on the 16th fairway at the Old Course in St. Andrews, Scotland. It would be natural to play safely down the middle here, but it’s actually false comfort. For the best angles around that “bulbous nose,” as Coore describes it, far better to aim a ball left or right down an arm of the Y-shaped fairway.

That’s a lot of words for just the first two holes, but so it goes at Cabot Cliffs; the next hole begins another chapter, out of the dunes and into a riverside meadow. This is the kind of journey golf entrepreneurs Ben Cowan-Dewar and Mike Keiser expected when they pieced together the acquisition of this land and hired Coore and Crenshaw, two of the most respected names in golf design, to make something special.

Coore, 69, and Crenshaw, 63, were on the ground floor of the “minimalist” movement, which brought the game’s architecture out of the dark ages. After decades dominated by dull, penal courses, they and a few others set out to draw from golf’s old-country roots, promoting bold contours and broad, strategic fairways that allow players to manage risk according to skill and weather conditions. 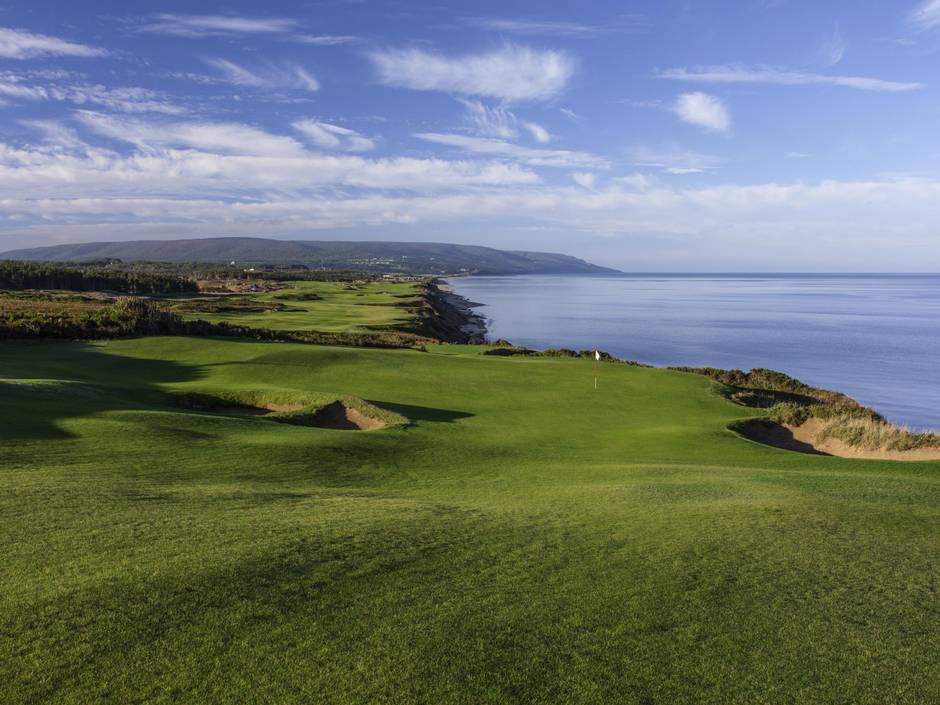 Nearing the end of Cabot Cliffs: The 17th green, and 18th hole behind. Photo by: Laurence Lambrecht

Many architects shy from the minimalist label, which is overused. But the best of them are known for paying careful respect to the land they are given and lavish meticulous attention on the finishing to disguise their work. When they are done, it can be difficult to distinguish where the natural ends and the artificial begins – a hallmark of Coore and Crenshaw’s work since the opening of their game-changing Sand Hills course in Nebraska 20 years ago.

At Cabot Cliffs, this legerdemain can be seen at the par-three sixth hole, which is back in the dunes. Wind howls across the exposed tee, then fades to a whisper as the fairway dips into a sheltered bowl of beach grass and bunkers. Approaching the green, some of these sandy pits bleed back into the dunes as if they’re going to seed. What’s real and what’s invented? It’s hard to be sure.

“We tried very hard to do that,” Coore says. “When you have a smallish dune area there, where two and six and five greens [come together], we were trying to figure out how best to use that area. It wasn’t big; you could have easily taken up every bit of it with one hole. We just felt like, let’s touch upon it, let’s go away, let’s come back to it …” 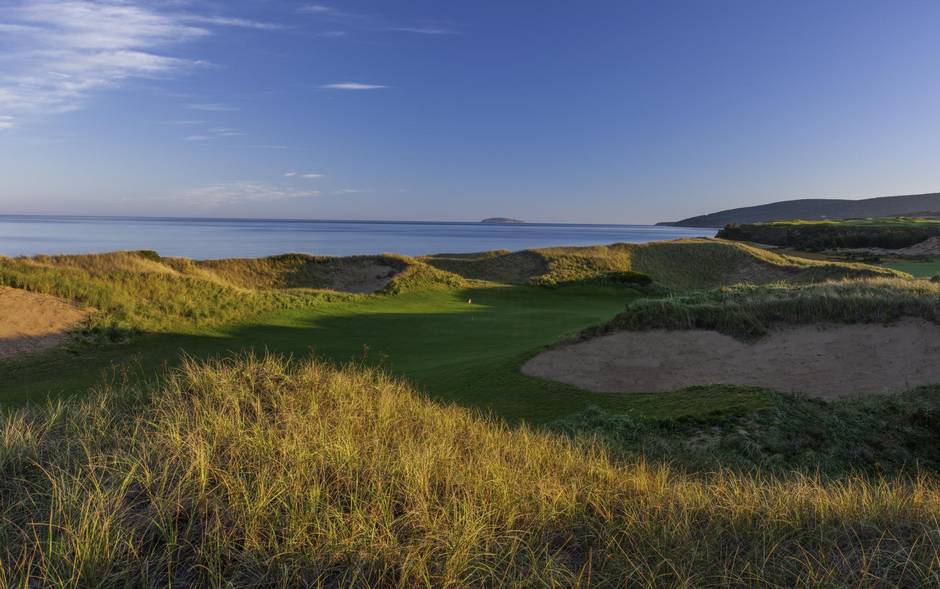 The back nine at Cabot Cliffs sprawls across a higher piece of the property, dominated by the plateau, a stand of upland forest and the namesake cliffs. It’s a more dramatic set of holes, but for all that will be written about the epic cliff-top 16th and 17th, whose potential would have been obvious to any armchair architect, we should also consider what came of the land around them.

After the turn, the routing tacks hard uphill along the forest’s edge, through an area that could have produced less inspiring golf. Instead, these holes embrace their strenuous topography and invoke a feeling not unlike that of Kapalua Plantation in Maui, where Coore and Crenshaw overcame similar challenges and built a celebrated PGA Tour stop.

The 13th swoops sharply uphill and to the right with the gulf at its back. It might have been an undistinguished connector to better land, but instead, it’s unforgettable. The key is right at the front of the green, where a towering sugarloaf mound stands ready to reject or deflect anything but the most assertive, well-struck approach. The hump resembles nothing more than an ancient, worn-down knob of Cape Breton highland, and the architects had the good sense to use it, rather than bulldozing it, as others might have.

“We truly laid that golf hole out around that hill,” Coore says. “For what it’s worth, it’s one of Ben’s and my favourite holes on the course. Most people will gravitate toward the holes that face the ocean, but boy, we really like that one.”

A favourite hole on the least favourable land? That’s how thoroughly this course celebrates Cape Breton. 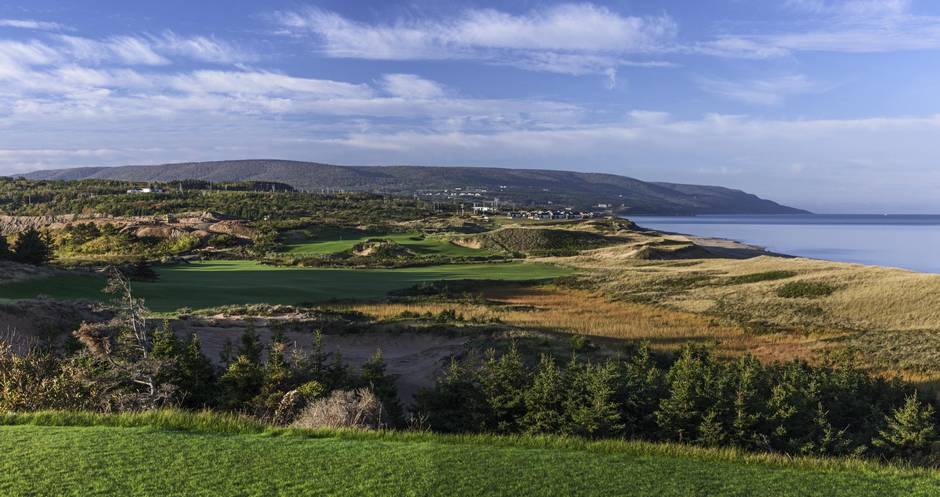 Cabot Cliffs (hole 2 seen here) offers a journey with its own rhythm and character. Photo by: Laurence Lambrecht

Cabot Cliffs is the second course at Cabot Links resort in Inverness, N.S. The course officially opens next summer but is offering limited preview play at reduced rates ($110 to $150) in 2015. Times are restricted to guests of the stylish hotel ($180 to $345, cabotlinks.com). Rooms overlook Rod Whitman’s outstanding beachside links course, which remains open to regular outside play. Both courses are walking-only except in case of disability, but pull carts and caddies are available.

Scheduled commercial flights go to Halifax and Sydney; rental cars and Cabot Links shuttles can be arranged for either airport. Most private planes fly to Port Hawkesbury Airport.

The sunset (gulf) coast and other parts of Cape Breton are easily accessible by car from Inverness. Non-golfing activities include many hiking trails and beaches, whale-watching, the unmissable Cabot Trail. Worth seeking out is Big Spruce Brewing, based in Nyanza, which makes a small selection of top-drawer craft beers, currently sold only rarely outside Cape Breton.

On minimalism: “The artistic elements of the golf course, the aesthetics and the visual character – all were determined by what we saw out there on that site. We didn’t want to create a golf course out there that looked like it had been brought from somewhere else. We wanted it to look like that landscape. To showcase the natural elements, the spectacular elements of that landscape and do it, hopefully, from a strategic standpoint, in an interesting fashion.”

On the site: “Once you realize what the character of the property is, and what you have to work with, it’s sort of like putting puzzle pieces out on the table. You jumble them out of box and there they are – now how do we put this puzzle together? … If you have a special site like that with a lot of different characteristics, it’s like a journey. You want to go out and experience that landscape and you try to find ways to do it in such a way that you can visit different parts of it more than once.”

On Rod Whitman: “As we got down to the green, he had roughed in the green, and yes … there was a conscious attempt at trying to make those landforms back there not only function for golf, but to make them compatible with what you saw in the distance. All of that is such a compliment to Rod Whitman, it’s unbelievable.”