You can go to Vancouver and stay in a sparkling glass-tower hotel and enjoy the spa treatments, the first-class dining and the spectacular ocean vistas. But for a hotel experience that offers a very different view of the city – perhaps more authentic and eye-opening – consider Skwachays Lodge, a remarkable new project in one of the city’s most vibrant, interesting neighbourhoods. Just don’t expect egg-white omelettes at your door or a Chanel boutique around the corner.

Skwachays, owned and operated by the Vancouver Native Housing Society, is a boutique hotel with themed rooms created by aboriginal artists. It’s also part of a social enterprise in the heart of the Downtown Eastside, existing side by side (or, more to the point, top to bottom) with social housing. The building encompasses three operations: The hotel and Urban Aboriginal Fair Trade Gallery are meant to subsidize long-term transitional housing for aboriginal artists-in-residence, who can stay up to three years. 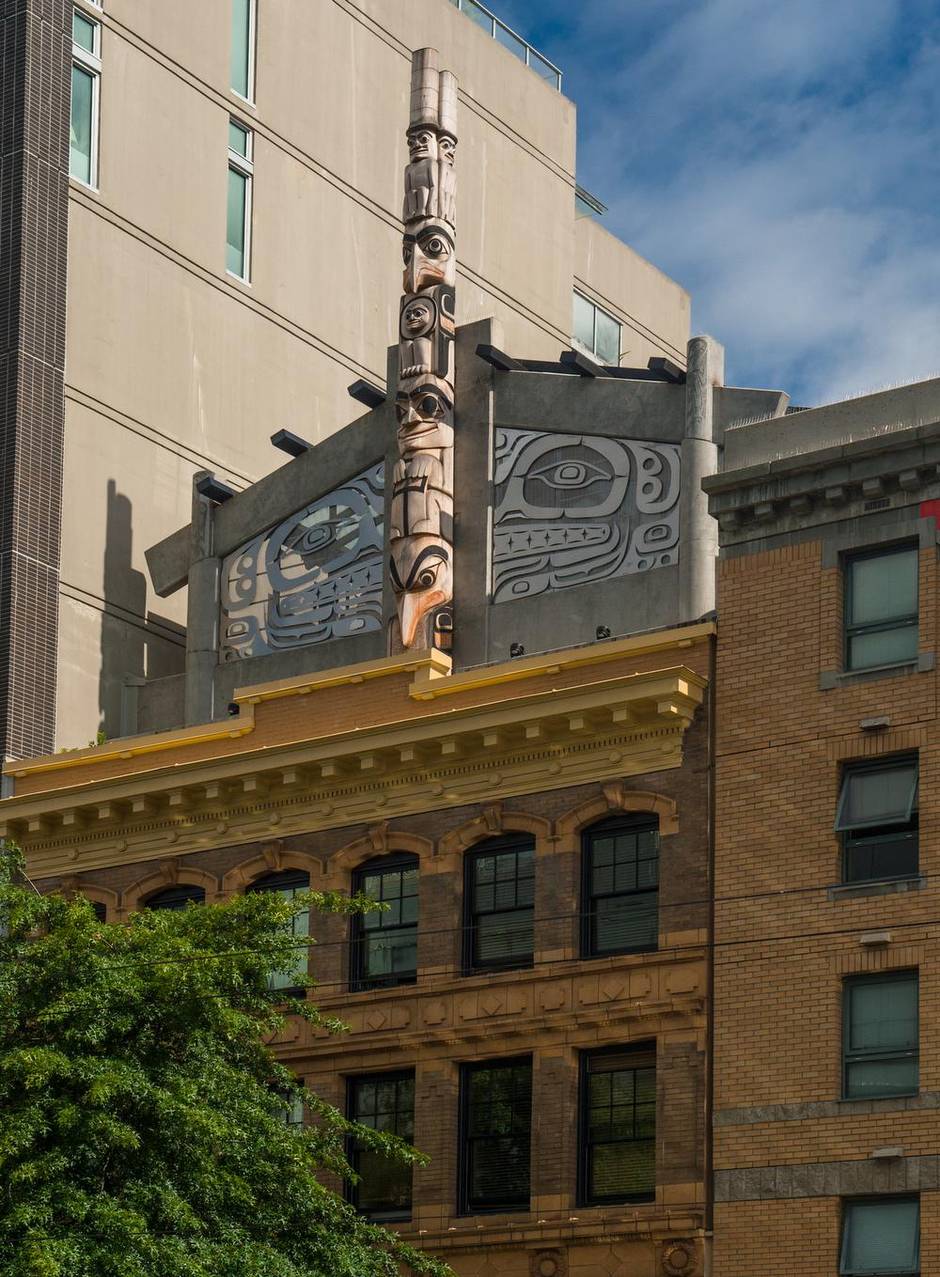 From the exterior, Skwachays (pronounced squa-CHIZE), just steps from the historic Chinatown and Gastown districts, is an intriguing architectural mash-up: Its Victorian façade is topped with a majestic longhouse-inspired structure and totem pole. The building has separate entrances for hotel guests and residents, although chance encounters occur in the elevator and meetings can be arranged. So hotel guests can rub shoulders with artists who live in the building – and buy their work.

These ties with First Nations artists offer visitors a connection to the region’s aboriginal heritage and life. And because it’s also a social enterprise, travellers can feel good about staying here: They are subsidizing supportive housing.

“We are a Vancouver hotel that’s making a difference – that’s how we see ourselves in this community,” Skwachays general manager, Maggie Edwards, said.

“I think the exposure of aboriginal art can be very transformative to the community. We not only showcase the culture, we create a platform where [artists] can showcase their product, sell their product. It’s a path toward financial independence.”

The boutique hotel, which opened last fall, is part of a growing trend in tourism: authentic Canadian aboriginal cultural experiences. A report commissioned by the Aboriginal Tourism Association of Canada, to be released soon, shows substantial growth in the industry since 2002: It now provides more than 30,000 jobs in Canada, according to ATAC chair Keith Henry. 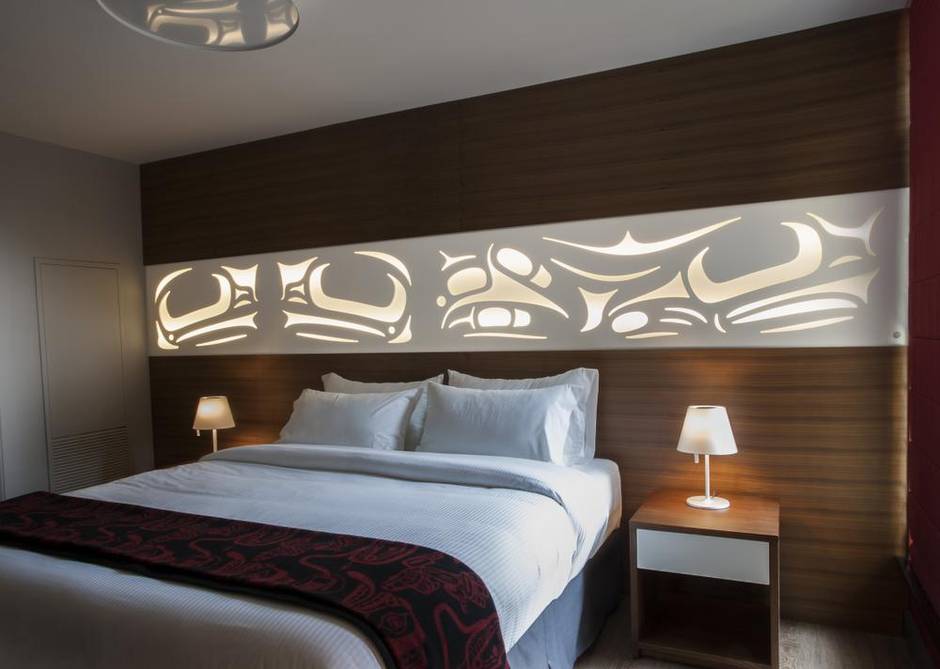 “We’re seeing an increasing demand by the travel trade … and consumers both in Canada and throughout the world,” said Henry, who is also chief executive offer of the Aboriginal Tourism Association of British Columbia. “The world is interested in the history and culture of Canada in its historical sense with the aboriginal people.”

The building that houses Skwachays used to be the old Pender residential hotel; it was abandoned and derelict when it was leased to the Vancouver Native Housing Society in 2008. The group kept the façade but gutted the place, creating 24 self-contained units meant for transitional social housing, along with 18 basic hotel rooms meant for aboriginal patients travelling from remote areas to receive medical treatment. Those hotel rooms were intended to support the transitional housing, but the hotel was not busy or successful.

Then came a serendipitous 2012 visit by Vancouver resident Jon Zwickel, whose company InnVentures advises the hospitality industry. Friends of his interested in aboriginal art were visiting from New York, so they all stopped by the hotel’s art gallery. They noticed a man in the corner with a mop and bucket, dealing with a major leak. It wasn’t a caretaker, but VNHS chief executive officer Dave Eddy. Zwickel came back later, struck up a conversation with Eddy and wound up volunteering to help upgrade the hotel. 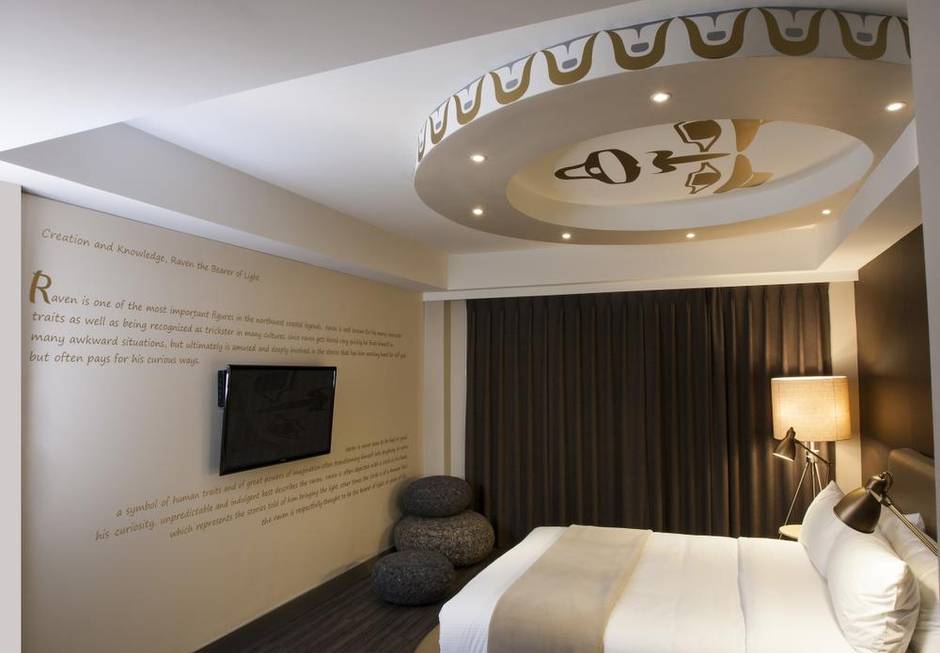 “It struck me that there was the gallery, and the live-work studios, but there was no connective tissue between that and the hotel rooms,” Zwickel recalled. “There was nothing unique or special or sense of place within those rooms. And it struck me that maybe there was an opportunity to integrate aboriginal art into the suites.”

He came up with the idea to turn that part of the enterprise into an aboriginal art hotel. They found First Nations artists (and one non-native artist who works with aboriginal artists and motifs) to create themed rooms, and paired them with interior design firms. Artists and designers donated their time.

“[I] laid out some parameters which fundamentally came down to: Each room will be a blank canvas, an empty box – it’s up to the artist to create a vision for that room, and then the interior designer is charged with collaborating with the artist and converting that vision into a functioning hotel suite,” Zwickel said. “Just those parameters – go for it.”

Two and a half years later, each hotel room is a work of art, with custom-built furniture and original artwork. 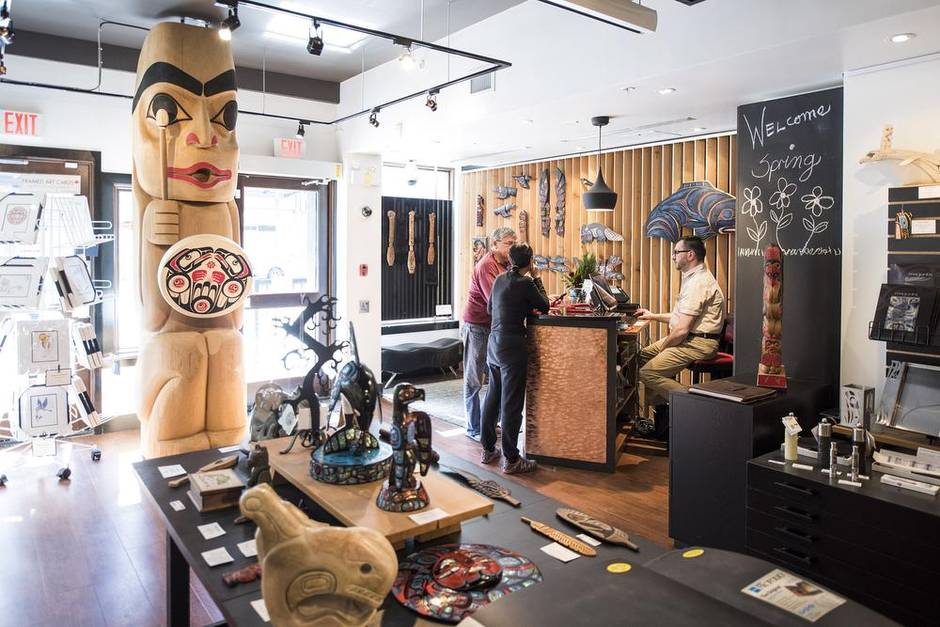 Profits from the hotel rooms and aboriginal art gallery at Skwachays go to the Vancouver Native Housing Society. (Jimmy Jeong for The Globe and Mail)

Clifton Fred’s Poem Suite is a wall-to-wall experience, with his pencil drawings and poetry papering the walls and immersing the hotel guest in art inspired by Tlingit mythology. Cursive words above the headboard include “whispered,” “guidance,” “elders” and “peace.” How’s that to help lull you to sleep?

In the striking Moon Suite, the work of artists Sabina Hill and Mark Preston, a queen bed sits on a circular pedestal beneath a painted golden moon that watches over sleeping guests.

As you enter Cree artist Jerry Whitehead’s Forest Spirits Suite, it is as if you are walking into the woods, with strips of white birch on the walls resembling trees, and framing a large painting of a family. The bedroom area is dominated by woodland wallpaper, and even the desk chair features a carved tree branch motif.

Whitehead, who designed three rooms, enjoyed the experience and believes the social enterprise is doing good work. “A lot of artists down here are barely making it, and then for this to come along, it really helped them out,” Whitehead said.

The neighbourhood has its challenges, to be sure. Homelessness, mental illness and drug use are visible issues. The first time I visited Skwachays, I witnessed a distraught woman standing at the entrance of a nearby public health centre, yelling. That said, I have never felt unsafe in the neighbourhood. 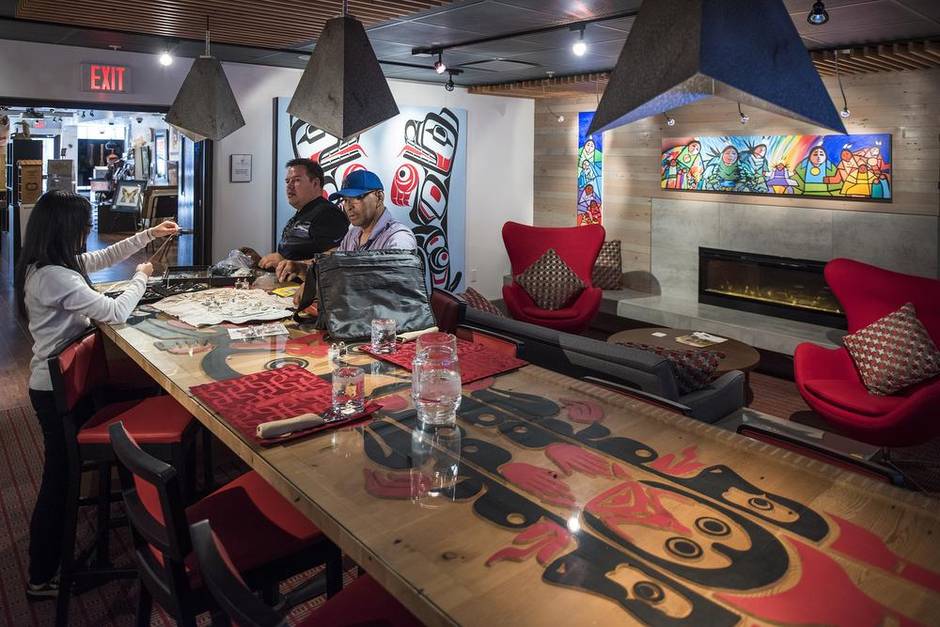 Yvonne Lai, left, of the Urban Aboriginal Fair Trade Gallery negotiates with artists Grant Pauls and Terrence Campbell over some of their work. (Jimmy Jeong for The Globe and Mail)

You won’t find a gym or hot tub at Skwachays, but it does have a First Nations sweat lodge on the spectacular longhouse patio, and a dramatic smudge room designed to evoke the outdoors. Guests can book an authentic ceremony with an elder – I would trade a run-of-the-mill, hot-stone massage for this kind of experience any day. The hotel also offers meet-and-greet events with the resident artists.

Zwickel said Skwachays is on track for its best year ever, with revenues up at both the gallery and the hotel. But there’s more to this venture’s success than its bottom line.

“I feel with the introduction of these hotel suites, we’ve completed the circle within the building. Now a guest can check in, explore the art [in the gallery], spend time in the room … then go down to the gallery again and possibly purchase or commission work by the artist who created the room that they stayed in,” Zwickel said.

“Now that it’s done and I can sit in the gallery and talk to the artists whose lives it’s changing, I get choked up, every time. When I sit in the Welcome Room and speak to guests and ask them about the experience, I get choked up. It’s making a difference in the lives of guests, the artists, of society – and me,” Zwickel continued. “It’s incredibly gratifying. It changed my life.” 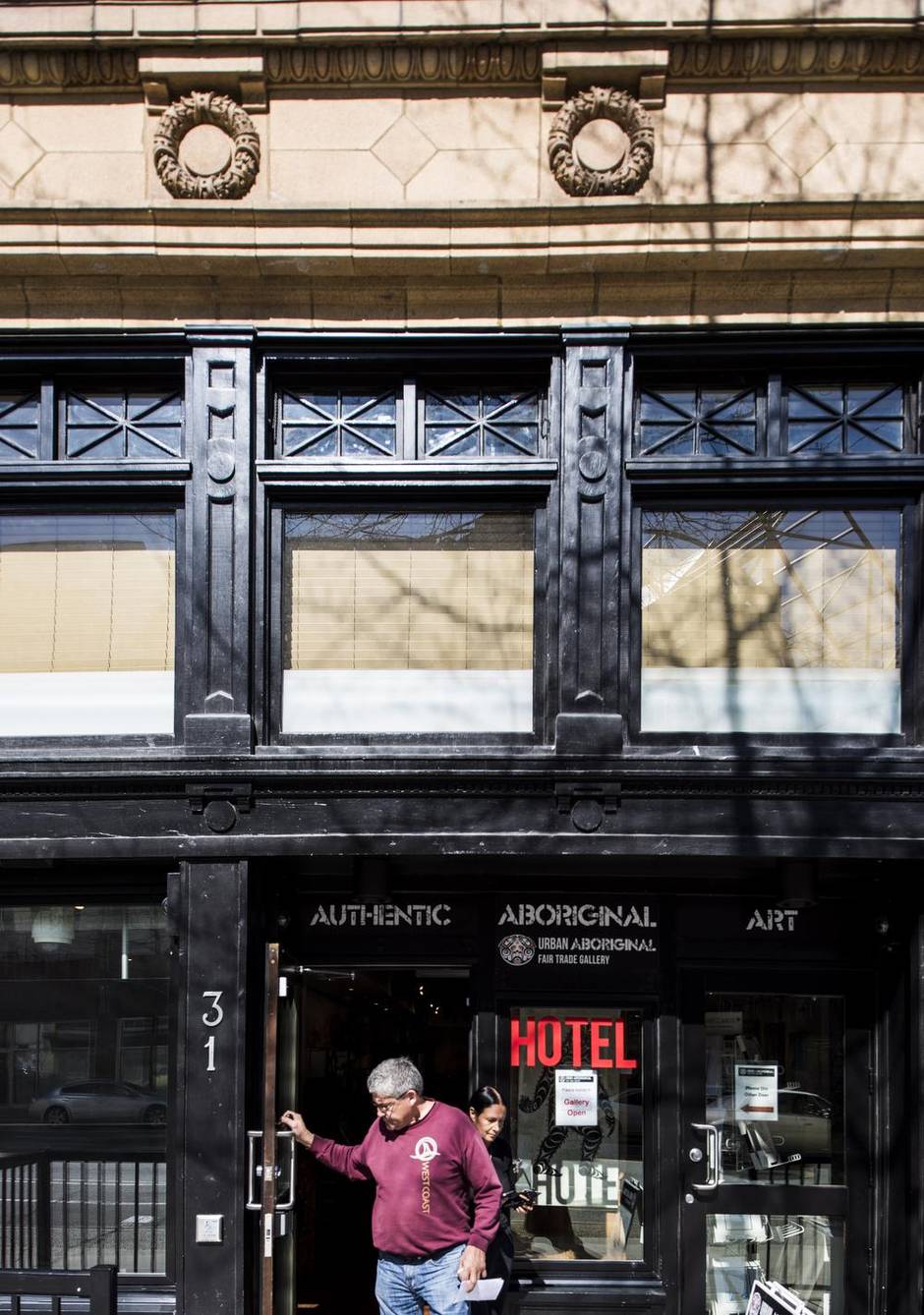 (Jimmy Jeong for The Globe and Mail)