The Domus Aurea was the Versailles of ancient Rome – and about as popular with the people. The palace had a 35-metre statue in its vestibule, three colonnades 11/2 kilometres long, a revolving banquet hall, walls coated with gold and gems, and a man-made lake. Finished in the year 66, and built on land cleared by the infamous fire of 64, the 80-hectare estate – the size of Toronto's entire Exhibition Place – was Emperor Nero's most decadent act of excess. "Rome is now one huge house: Romans, migrate to the town Veio! … that is, if that house hasn't sprawled all the way to Veio!" one popular satire went at the time.

As well as one of the most decadent palaces in history, it was also one of the most important archaeological finds of the modern era. And, until recently, inaccessible to the public.

Not any more. On weekends until Aug. 30, the Domus Aurea is open to visitors. The guided visits can be prebooked at www.coopculture.it.

On my visit in December, an archeologist led the 1.5-hour-long tour through sumptuous galleries. The ceilings still were decorated with the same detailed stuccoes and vibrant frescoes that, on their rediscovery in the 15th century, had so influenced the Renaissance explorers who spelunked down here to take a look – including Raphael, Ghirlandaio and Perugino. In fact, the art found within the Domus Aurea directly shaped the trajectory of Renaissance art; these 15th- and 16th-century greats directly drew on what they saw there to fresco "modern" palaces and galleries throughout Rome, including even at the Vatican.

In one enormous, octagonal room, thought to be one of the banqueting halls, I stood beneath the open oculus in the centre, mouth slightly open. Even with the frescoes here having been stripped centuries ago, I could imagine guests reclining on couches, listening to Nero sing, the scents of perfume and flower petals in the air.

For as long as I had lived in Rome, I didn't think I'd ever get to see these galleries in person. The problem? Flooding. The ancient palace is located in a particularly delicate spot. By the second century, it had been dismantled; its lake was drained (and became the site of the Colosseum), the marbles stripped, the rooms filled in and Trajan's Baths built on top. Today, therefore, the Domus Aurea is located under the park on the Colle Oppio, just across from the Colosseum. And that means trouble. When it rains, water soaks through the palace's ancient roof. In 2010, after a particularly heavy rain, a 645-square-foot section of the ceiling caved. Out of safety, therefore, the site had been closed since 2005, with only a brief reopening in 2007.

But a major, much-needed restoration is now under way. The $43.7-million project hinges on building a drainage system over about 20 per cent of the 16,000 square metres above the Domus. Channels have been dug that, restorers say, will allow about half of the rainwater to drain off. The project addresses the problem of the park's weight on top of the structure, too, by rebuilding the surface of the park to directly connect it to the Domus, decreasing the weight by about 70 per cent.

In a particularly modern attempt at transparency, you can visit the restoration's official website to track its progress (archeoroma.beniculturali.it/cantieredomusaurea). You can also donate to the project, if you feel so inclined. Hopefully, the restoration means the Domus Aurea will reopen to the public again for much longer. But nothing, of course, is for sure in Rome – so if you can, go in person … and now.

Athens isn’t pretty, but it's exciting: discover the city's cultural rebirth
March 27, 2015
Wondering where to eat in Rome? Try this tasty 'hood
July 14, 2014 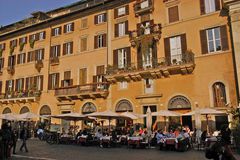 I was happy wandering Rome alone, and then I made a friend
September 1, 2014 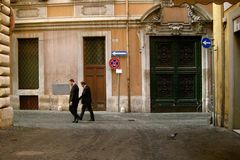