The mountain hut smelled of hiking boots and searing meat, but the first thing I noticed was the fridge in the corner, stocked with beer. The second thing was the burly man with a knife. He was stooping through a low doorway from the kitchen, but he may as well have been stepping out of an Asterix and Obelix comic book, having just set down the wild boar he’d been carrying under his arm.

“What you want?” he asked us, in French.

We’d just scampered down from the summit of Monte Incudine, part of Corsica’s famous GR20 multiday trek, and had detoured to refuel here at the mountain refuge, i-Croci Bergerie.

The man frowned. “No beer.”

I’d been thinking about a cold Pietra Amber for 19 of the 20 kilometres we’d hiked so far. My eyes flickered to the fridge and the big man unleashed a deep guffaw.

“Of course beers!” He ducked back to the kitchen and gestured with his knife for us to follow him. “What else you like?” 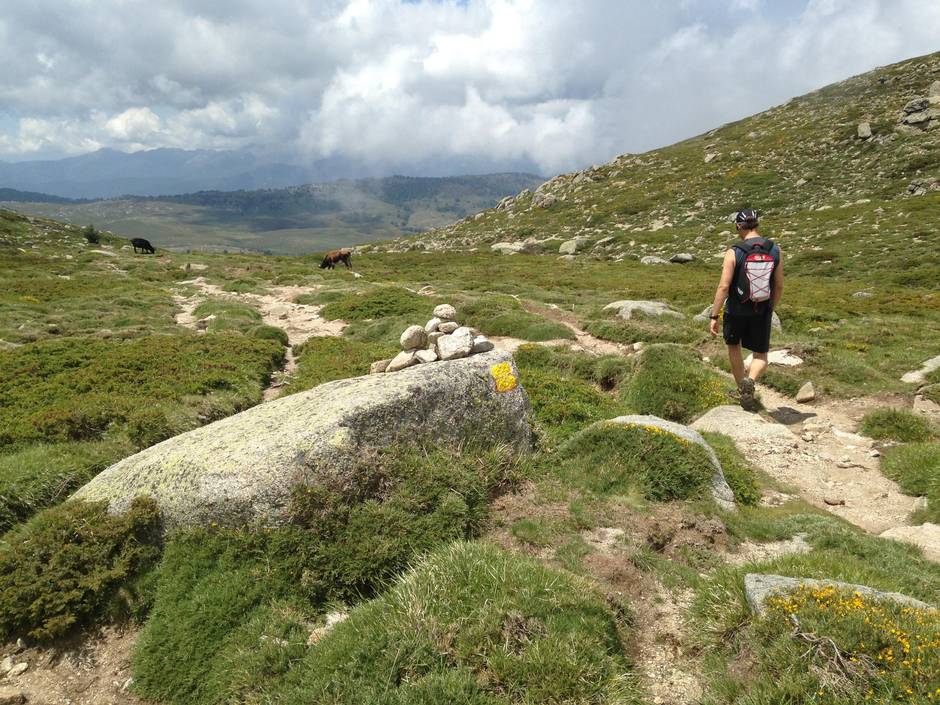 As a day-hike, the Cuscione Plateau and Monte Incudine offer a taste of the GR-20: craggy summits, swaths of flowering maquis, and rocky grassland dotted with cattle.(Shelley Wood)

The GR20 – a jagged spine crossing the entire island of Corsica, north to south – is the jewel of Europe’s Grandes Randonnées. The route takes 15 days, seven to do either the northern or southern sections. When we were planning our vacation to this French Mediterranean island, we drooled briefly over a map of the GR20, debating the logistics. But with only nine days and a hankering to also see some of the towns and beaches, we opted instead to tackle some shorter hikes while touring as much of the island as possible.

We started out from the northwest corner in picturesque Calvi, which locals insist was the true birthplace of Christopher Columbus. Our first objective was Punta Revellata, a meandering 10-kilometre loop around the Revellata lighthouse that offers sweeping views of the Calvi harbour. This was also our introduction to maquis: the tough and fragrant vegetation for which the island is famous. It’s a mix of rockrose, wild fennel, juniper, curry plant, rosemary, sticky fleabane and myrtle – depending on the elevation and latitude. The aromatic maquis turns up, we discovered, in everything from soaps to beers across the island. Dry and prickly, it is also a persuasive argument against wandering too far off the trails.

From Calvi we pointed our rental car south to the busy port-town of Ajaccio – Napoleon’s birthplace – then swung inland, climbing quickly into steeper, lusher terrain. We’d selected the lovingly restored Châtelet de Campo B&B, where our hosts proved to be avid outdoorspeople. On their advice, our first hike was nearby Punta D’Urghjavari. It’s a moderately challenging, 15-kilometre circuit through some of Corsica’s legendary diversity. Fields and orchards give way to gnarled forests of pine, oak and chestnut interspersed with steaming thickets of shoulder-high ferns before it delivered us onto the sun-and-wind-scrubbed rocks toward the summit.

It was worth the slog. The peak rewards with a makeshift shrine to Santa Maria and views west to the Gulf of Ajaccio and, further south, the distant Gulf of Valinco. On the return trip, we plunged down a chunky slope on the opposite side and found ourselves doing a bit of scrambling. Twice, we were happy to discover a length of chain to help lower ourselves down the steep granite. 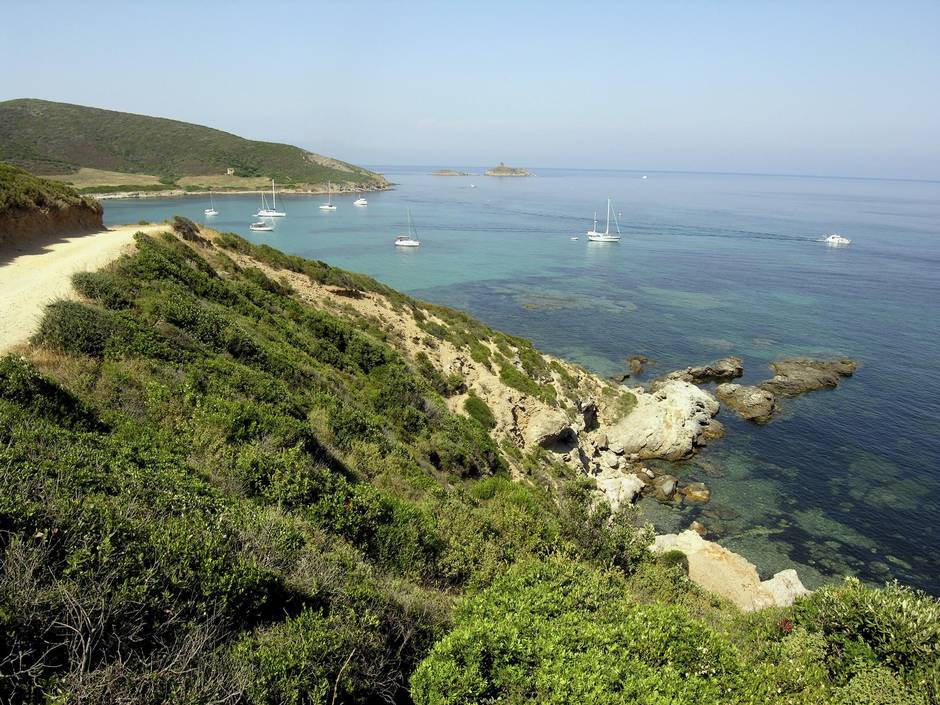 Cap Corse is famous for its rugged beauty. (iStock)

Hell-bent on sampling a taste of the GR20, we drove further inland the following day, parking at the tiny chapel San Petru and joining Stage 13. This section crosses the Coscione Plateau and Monte Incudine, which at 2,134 metres is the highest peak of southern Corsica. This is what Corsican hiking truly has to offer: craggy summits tall enough to snag the passing clouds, swaths of flowering maquis, and rocky grassland dotted with goats and pigs.

For the last few days of our Corsican blitz, we opted to forgo the busier south, heading north to Cap Corse. Famous for its rugged beauty, the cape is a bony finger of land pointing directly at Genoa, the city that controlled Corsica for five centuries until France acquired the island in 1768. Italy’s influence persists. The island’s cuisine is a delicious mélange of Italian and French; road habits retain a distinct Italian tenor; and Corsu, the widely spoken native language, is very similar to Italian and appears on most signage, alongside French.

Our goal in Cap Corse was the Sentier des Douaniers, a footpath skirting the head of the peninsula once used by sentries to patrol for smuggling. The full trail runs nearly 20 kilometres from Centuri-Port on the west coast all the way around to Macinaggio on the east, but unless you’re hungering for a 40-kilometre out-and-back hike, a one-way trip requires two cars. (In spring and summer, however, it’s possible to leave a car in Macinaggio then travel by boat to Barcaggio on the outer tip of the cape.)

From Barcaggio we part-hiked, part-ran the undulating 12 kilometres back to the car, ogling the crumbling watchtowers that still stud the rocky trail. It was our least taxing route so far, with plenty of scenic spots for lunch or a dip in the glittering sea. For long sections, our only companions were the honey-coloured cows dozing on the quiet beaches.

For our final ramble we opted for more coastline, this time the gnarled footpath skirting the Agriates Desert at the western base of the Cape. This coastal trail, 40 kilometres long, is inaccessible by car but passes through one of the island’s most treasured beaches, Plage de Loto, where boats disgorge tourists who favour sunbathing over scrambling.

On our Corsican treks, we encountered few foreign tourists, although the hale French nationals we met, laden with packs or picnicking on the peaks, are uniformly friendly. Back at the i-Croci hut, before the big man with the knife pried open our beers and made us a sandwich, he asked where we were from and was delighted to hear we’d come so far.

“Canadians good people,” he said, cramming a stout wedge of sheep’s cheese into a baguette. Then he chuckled and corrected himself. “No. All mountain people good people.” 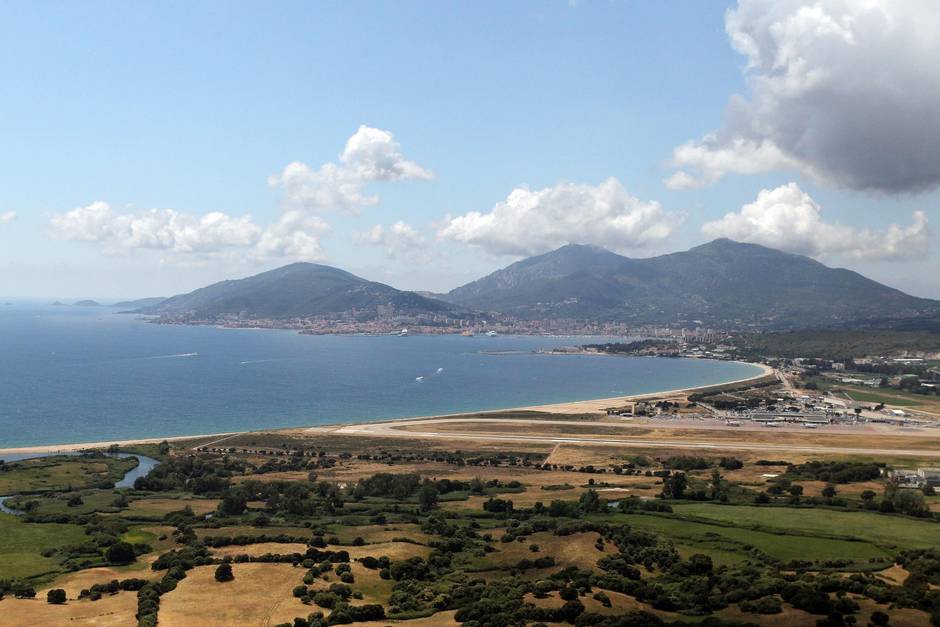 The best months for hiking in Corsica are from May to September, extending into April and October for the lower-altitude routes. Avoid mid-July to mid-August when temperatures soar and tourist numbers threaten to split the island at its seams.

Air France flies from Paris and other mainland cities to the major Corsican towns, while regular ferries link French and Italian ports with Calvi, Bastia and Ajaccio. Discount airlines offer flights in peak season from the United Kingdom and Germany. On the island, rental cars are cheap and necessary to access the most unspoiled nooks. The Train-Corse railway runs from Bastia to Ajaccio with a separate spur to Calvi, offering spectacular views and a stop in the high mountains at Vizzavona, the midway point of the GR20.

Coastal towns offer great seafood, including bouillabaisse and moules. Inland, the cuisine is distinctly meatier with charcuterie, goat and wild-pig dominating the menu alongside fresh pastas and brocciu, a goats-milk cheese similar to ricotta. Chestnut flour, a Corsican staple, is found in everything from cakes to beer.