As we sit beneath a canopy of trees in Montreal's Parc La Fontaine, my tour guide pours me a paper cup full of sparkling cider and gently knocks it – "Salut!" – against the side of his own. We had been leisurely cycling through residential streets, parks and alleyways all morning, and this informal picnic of effervescent cider and delicious, gourmet salmon wraps is the perfect coda to my introduction to the city.

Montreal has always reminded me of an unapproachable crush – it's arty and sophisticated, and, to me, seems to possess an impenetrable coolness. In recent years, the rise of its indie music scene, trendsetting street fashion and unapologetically rustic comfort cuisine has only added to its mystique.

On previous visits, I had felt every bit the awkward outsider. I'd wander the streets of Old Montreal or take in the view from atop Mount Royal, keenly aware that those who lived here were going to the better bars, eating fabulous food and participating in all sorts of amazing activities that I couldn't even begin to imagine.

This time, I wanted to crack that barrier. So I joined a tour.

Guided tours are typically the antithesis of cool. But Shea Mayer's Fitz & Follwell Co. is a different kind of tour company. As the Montreal resident explains, his cycling tours aren't just meant to take visitors to the most popular tourist attractions. Rather, they're based on his idea of a perfect day in the city.

"That's how I designed the routes: What's my favourite bagel place? Where do I think the best coffee is? What do I do when I go down to the market?" he says.

His Bike & Yoga tour, for example, takes visitors through the bohemian neighbourhood of Le Plateau, with a break along the way for smoothies at his favourite juice bar and stops for yoga sessions in three of the area's tranquil parks. His all-day Mountainside to Riverbank package offers a more challenging ride for seasoned cyclists up to the top of Mount Royal, then down along the St. Lawrence River to Saint-Helen's and Notre Dame Islands.

I chose to tag along on his 'Hoods and Hidden Gems tour, lured by the promise I would be immersed "in the local hangouts of the city's hippest habitants."

Upon my arrival at his Mount-Royal West Avenue shop, Mr. Mayer sets me up with a sleek black city cruiser, which he has christened "Jeanne," after the pioneering Montreal nurse Jeanne Mance. (All of the bikes at his shop are similarly named after the city's historic figures, like "Molson" after the beer tycoon, and "Lili" after the legendary burlesque dancer Lili St Cyr.)

Montreal is renowned for being a bike-friendly city, with designated cycling lanes throughout the side streets and thoroughfares. It's also the launching pad for the now-famous Bixi, a bike-sharing system that allows users to rent a vehicle from one of the many stations scattered around town and deposit it at another station when they're finished riding. The system has proved so popular that cities around the world, from Toronto to Melbourne, have adopted it.

But because Bixi bikes are meant for only short commutes, they're not ideal for longer, leisurely trips. My Jeanne offers a smoother ride.

Mr. Mayer leads our small group through the tony francophone enclave of Outremont and Le Plateau. Along our route, he stops to point out quirky details, not always found in guide books, such as where larpers (live action role players) gather to enact their fantastical battles or where resident bohemians hold their "tam tams," or drum sessions.

We stop to pick up freshly baked bagels at the Montreal institution St. Viateur Bagel, and tote them across the street to Mr. Mayer's neighbourhood hangout, Café Olympico, where he orders us the café's specialty espresso coffees.

The next part of the tour takes us through Little Italy and Mile End, before we wind our way over to our next stop, the Jean-Talon Market. As we wander around exploring the smorgasbord of fresh produce, meats, cheeses and baked goods, Mr. Mayer picks up our lunch at the eatery Milliner Creativite Gourmand for our picnic.

We then hop back onto our bikes and take a detour through several of the city's so-called green alleyways, the results of a civic initiative to beautify gritty, residential back lanes. Planted with flowers and greenery, they're a hidden, urban oasis. Then, it's off to Parc La Fontaine, where we enjoy our picnic on a grassy slope overlooking the pond.

While that concludes Mr. Mayer's itinerary for a perfect day in Montreal, my ideal day is incomplete without a trip to the spa. I make my way over to the restored industrial, waterfront district of Vieux-Port for a massage at Bota Bota.

Bota Bota, which opened last year, is actually a moored ferryboat, transformed into a chic, modern facility. Co-owner Natalie Émond explains that she and sister Genevieve had been scouring the city for a site for their new spa, but were unable to find a location that was easily accessible to downtown clients, yet still close to nature. The revitalized waterfront, with its park-like setting, was as close to that ideal as they could get. When they heard that the 1951 ferryboat was for sale, they knew they had found their solution. The sisters snapped it up and commissioned Montreal's Sid Lee Architecture to redesign the vessel.

The boat's hull has been revamped into a change room and locker room, while the main deck houses its reception area, restaurant and treatment facilities. On the upper decks are a yoga room, relaxation areas and the spa's main attraction, its water circuit, consisting of two saunas, a steam room, two outdoor hot tubs and cold baths.

"To do the water circuit in the right way, you have to go into a hot source, whether it is the sauna or the steam room, for 10 to 15 minutes," Ms. Émond says. Next, it's a "brief and courageous dip into a cold plunge for a few seconds."

Finally, she recommends a 15-to-20-minute relaxation period on the terrace lounge chairs or indoor bean bag seats, and then back to the hot source to redo the circuit again. The process is meant to be good for one's skin and circulation.

I start out with a 60-minute massage, then take a few rounds of the water circuit. Ms. Émond is right: It takes courage to jump into one of the bracing, cold baths after the warmth of the steam and sauna. But the effect is invigorating. As I flop onto one of the lounge chairs, the sound of the surrounding water lapping against the hull of the boat and the tranquillity of the nautical scenery help put me into a state of deep relaxation.

Pampered and loosened up, I'm ready for dinner.

Montreal has no shortage of great restaurants. There's L'Express, an old-school French bistro in Le Plateau that has impeccable service and a knack for pumping out consistently well-prepared classics such as steak frites, fish soup and pork rillettes. There's Joe Beef, operated by chefs David McMillan and Frédéric Moran, known for drool-worthy dishes such as steaks, lobster spaghetti and the gourmet nod to KFC: Foie Gras Double Down. And there's DNA, a shiny, modern restaurant in Old Montreal with an ever-changing menu based on seasonal, local ingredients.

It's no wonder that international heavyweight chefs such as Gordon Ramsay and Daniel Boulud want a piece of this city's thriving culinary scene. Mr. Ramsay opened Laurier Gordon Ramsay in August, giving a celebrity facelift to the pre-existing Rotisserie Laurier BBQ. (Although the remodelled restaurant's rotisserie chicken and down-home fare is tasty and reasonably priced, some Montrealers balk at the idea of a British chef helming their beloved family joint.) Meanwhile, Mr. Boulud is planning to open Maison Boulud, featuring his signature French cuisine, at the Ritz-Carlton Montreal in early 2012, when the hotel, which has been under extensive reconstruction, reopens.

This night, however, I'm eager to try Le Bremner in Old Montreal, a new seafood restaurant of local star chef Chuck Hughes. Earlier this year, Mr. Hughes became the second Canadian, after Rob Feenie, to win the Iron Chef America cooking competition, and was the first Montreal chef to compete on the show. His style of cooking represents the kind of casual, rustic food for which the city is becoming increasingly famous.

Finding Le Bremner can be a little tricky, though. Blink and you'll miss it. The cozy restaurant, located at 361 Rue Saint-Paul East,is hidden down a short flight of stairs and bears only a sign that reads: "Restaurant." It has no website.

Inside the buzzing dining room, I happily tuck into an assortment of small dishes, luscious raw oysters, bacon and cheddar foccacia bread and a pan full of sardines. In spite of its secluded location, the bar and dining room are bustling.

I feel slightly giddy. This is the cool, hip Montreal I've long admired. And this time, I'm seeing it from the inside.

Where to eat Lawrence Restaurant: This charming little restaurant is jam-packed during its weekend brunch, and for good reason. The kitchen delivers simple, elegant and totally delicious dishes such as smoked salmon and scrambled eggs, eggs Florentine and French toast. 514-503-1070; 5201 Blvd. St. Laurent; lawrencerestaurant.com

Réservoir: For late-night drinks, sample Réservoir's own microbrews while you gorge on charcuterie, cheeses and other bar snacks scrawled on its chalkboard menu. 9 Rue Duluth East; 514-849-7779; brasseriereservoir.ca

Air Canada also flies daily into the city from across Canada. aircanada.com.

Via Rail departs several times daily from Ottawa and Toronto to Montreal. viarail.ca 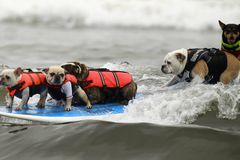 What are some great off-the-beaten-path finds in Montreal?
July 15, 2011 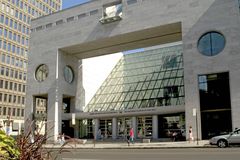 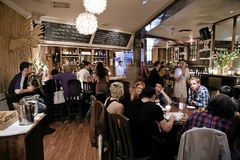 I want to propose in Montreal. Where can we stay that's romantic and affordable?
November 4, 2010 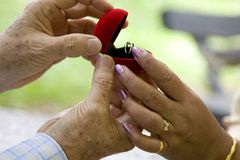 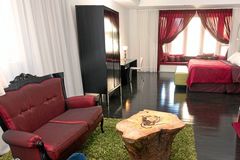