Most of us want to leave our speck-on-the-map towns far behind. Not comic Shaun Majumder. He wants to do quite the opposite.

Majumder Manor, a docu-series premiering on W Network on Jan. 7, sees the down-to-earth actor returning to Burlington, Nfld., population 350, where even a box of Timbits is a road trip away. The show follows his plans to build a five-star lodge and restaurant where fried bologna is not on the menu. (Unless, perhaps in an ironic way.) In the series, expect a little bromance, a little chainsawing, and a lot of locals telling the Los Angeles-based actor with a shelfful of Geminis exactly what they think of his plans.

What sparked this idea, building a hotel in your hometown?

I never set out to be a hotelier. It was born out of a love for the place, and a want to share that place with as many people as I can. The first time I went back to Newfoundland to buy land, it was just literally to go back – to get a plot of little land so I have something back home. Then, being a filmmaker and a storyteller, I thought that would be a fun documentary film about me going back, building something that was environmentally responsible, green, off the grid. As time passed, I was living in Los Angeles. And every time I'd go back to Burlington, I realized there's nowhere to stay and nowhere to eat. All these things started coming to a head and I was, like wait a minute, why don't I do something for the community?

Where the heck is Burlington anyway?

Everybody associates Newfoundland with St. John's. Burlington is about six or seven hours west of St. John's. This is the west coast of Newfoundland. People would fly into Deer Lake, Nfld., and drive the 1.5 hours to Burlington. It's closer to Gros Morne park.

How different is Majumder Manor from the house you grew up in?

I grew up in a tiny little trailer that had very insufficient wiring. In fact, in the show, my sister talks about how she remembers being shocked every time she turned on the water.

So what can people do in Burlington?

We've got sea kayaking, boating. We're really close to Iceberg Alley. There's soapstone quarries. There's archeological sites. And then salmon fishing. Berry picking in the fall. Burlington Harbour is a designated safe harbour and it has always blown me away that that harbour is not filled with sailboats in the summer. It's actually more exciting in the winter sometimes, with the snowmobiling and the skiing, which is on Marble Mountain. And hiking in the winter and, of course, pond hockey. Again, the infrastructure is not there – yet.

What can travellers expect now?

The TV show is very clear about what stage of the project we're at. At this point, I will say that this summer is going to be a very busy summer in Burlington. As part of the accommodation plan that I created for the Gathering [a "food, fire and music" festival last summer], we purchased these kind of prospector tents.

What was awesome, my fiancé, Shelby, who has a really great design touch, turned them into these beautiful [tents]. We put beds in them. We had great sheets. We had these great little lamps and chandeliers made of found items. Eventually we want to build cabins and pods, which are kind of remote, tucked-away, exclusive little pods that are around little points and in little coves in the area.

Also a greenhouse. We built a 2,600-square foot green house that will eventually provide vegetables for not only the kitchen in the manor but also provide kind of a local economy so people can grow their own vegetables.

Do we see you pick up a hammer on the show?

Oh, big time. I pick up a hammer. I'm lugging stuff. There's a lot of work that I physically put into this project.

With its focus on green construction, does this mean there will be a clothesline outside? Every gorgeous Newfoundland tourism ad has undies blowing in the wind.

People will not have to dry their clothes on a clothesline. I think it's cute. Maybe I'll consider that. If you're coming to have the Ritz-Carlton experience, and you have that expectation, you may not get it. But that's actually part of the charm. And I think people are looking for that kind of thing nowadays. They want to experience the local flair and the local people.

Get close (but not too close) to glaciers in the North Atlantic
June 13, 2012 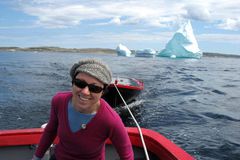 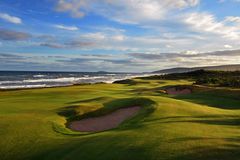