In Western Cape Breton, the hills are alive with the sound of music. So are the parish halls, the pubs, even several barns. It's a joyful noise - one made with fiddles, accompanied perhaps by pianos, blistering bagpipes or guitars, and underscored by the percussive pound of dancing feet - imported in the 18th-century when Scottish immigrants found refuge in a New World locale that looked curiously like home. Being geographically isolated, they preserved their traditional arts in a purer form than Mother Country cousins. But the idea that Cape Breton is, by extension, some twee Brigadoon swaddled in mystical mist is inaccurate. The island's Gaelic-inflected culture is a living, evolving entity. If you want to experience it fully this summer, follow these five steps:

To enter the scene with some credibility, CFAs (folks who "come from away") should be able to distinguish MacIsaacs from MacMasters and name at least two Rankins. If you can't, the Celtic Music Interpretive Centre in Judique will get you up to speed. Located on Route 19 about a 30-minute drive from the Canso Causeway, the centre is crammed with educational exhibits outlining the finer points of strathspeys, reels and such; plus, it has an archive with vintage recordings and artist interviews. If all that inspires you to flex a bow, you can play along to an eight-minute video tutorial or join a scheduled afternoon workshop. The adjacent Buddy MacMaster School of Fiddling also operates week-long courses for intermediate and advanced players every October during the Celtic Colours International Festival.

"Ceilidhs" (that's KAY-lees for the linguistically challenged) are exuberant old-school kitchen parties combining music, stories and dance. If you can wrangle an invite to a genuine at-home ceilidh, say yes. Otherwise, there are ample open-to-all options: including those at the Celtic Music Interpretive Centre, Sunday and Wednesday, that showcase performers like premier fiddler and former Nova Scotia premier Rodney MacDonald. Raylene Rankin (one of the island's famed singing siblings) points out that public ceilidhs are morphing into "sit-down affairs with less foolery and more formality." Yet in Cape Breton the latter is relative. For example, fiddle tunes roll together in sets that leave little pause for polite concert-like applause. So hold the handclapping and show your appreciation with occasional yips instead.

Since islanders are an independent, idiosyncratic lot, "following the herd" may seem like dubious advice. Nevertheless, it works if you're looking for venues with a higher local-to-tourist ratio. Say you find yourself at the Red Shoe Pub (a Mabou landmark where everyone ends up) on Tuesday evening. You can dig into the catch of the day, hear hot dinnertime tunes, then just tag along when the crowd migrates across the street to Joey Beaton's community hall ceilidh. Alternatively, after the Shoe's Monday-night jam, you can join the convoy heading to the weekly Brook Village Dance. Buddying up makes logistical sense too, as middle-of-nowhere venues are notoriously hard to find at night. Take Glencoe Mills' dance hall: Usual instructions include "drive up the dirt road until you're lost, then park by the trucks."

In this neck of the woods, music can't be separated from dance (indeed, trying to determine which came first is Cape Breton's answer to the chicken-and-egg game). Dancing itself comes in two varieties and step dancing is probably the first you'll encounter. This is often a star turn with a featured performer improvising from a repertoire of steps at lightning speed, but it can be impromptu as well. Enthusiastic high kickers should remember that feet are kept "close to the floor" - aim for Leonardo DiCaprio's Titanic tap, not Michael Flatley's Riverdance antics. At one ceilidh, I watched a teen at the back of the room spontaneously break into dance as if it was as natural as breathing. That she did so while texting also highlights step dancing's key characteristic here: It's all about footwork. Ready to try?

You will be repeatedly told to go to an Inverness County square dance because they're the most accessible expression of authentic Cape Breton culture. Lilliputian halls literally shake from dancers' exertion, and the mood is so infectious even inveterate non-dancers eventually succumb. The process starts with an involuntary head bob, then a convulsing knee… before you know it, you're on the dance floor. Although figuring out the set formations seems intimidating, regulars will send you reeling in the right direction. The collective movement that results is more than old-fashioned fun. Heather Rankin (youngest member of the eponymous group) notes that it "doubles as a workout in an area with no gyms," while sister Raylene calls it "a catharsis, a needed release in a place where life is rugged." Above all, it's a celebration. 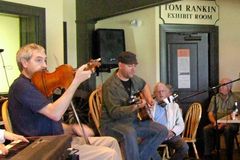 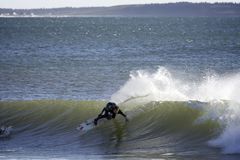 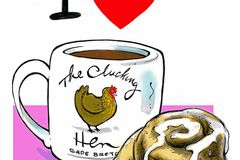