Dispatch is a series of first-person travel stories from the road. Readers can share their experiences, from the sublime to the strange.

On a placard in the International Mountain Museum in Pokhara, Nepal, I fixated on the date "2002," the year listed as the last time the country experienced a sizable earthquake. I was reading this on April 17, 2015.

I was concerned because significant earthquakes occur in Nepal every decade as a result of the continual movement of tectonic plates under the Himalayan mountain ranges. Clearly, a major earthquake was overdue. But I tried to banish any thoughts of doom as this was the day before I would start an 11-day trek in the Himalayas.

As we now know, I had been right to worry. But fortunately for our trekking party of three, we were mostly only witnesses to the destruction of the 7.8-magnitude earthquake that struck eight days later. A last-minute decision to trek the scarcely travelled Upper Mustang region rather than the more frequented Everest Base Camp route would make all the difference in my fate. For the Nepali people, including our guide, Krishna, and many other tourists, however, the powerful earthquake would bring great loss and devastation.

Mustang is an ancient kingdom in the Himalayas. It's been a significant trade centre with Tibet for centuries, known mostly for the salt trade route made famous by the 1999 Academy Award-nominated film, Himalaya.

The backdrop, in both film and reality, is the expansive mountain views. The arid climate lays bare this region's stunning other-worldly rock formations and varied earth colours. Occasional relief from the vast views comes in the forms of ancient stupas and monasteries that one comes upon almost by surprise as, from a distance, their colouring and shape are barely discernible from the natural landscapes. These solemn structures, along with strings of prayer flags and rows of prayer wheels, located at high passes and other auspicious places in this harsh environment, are reminders of the people's humbleness before their gods and their strong belief in karma.

There's an edge-of-your-seat scene in Himalaya where a caravan of yaks carrying salt attempts to cross a failing narrow path along a steep cliff. I remember joking with our trekking group that our journey would be like the film except without the danger.

Mustang still has a ceremonial king. His palace in Lo Manthang, the capital of the former kingdom, was our final destination. Embarking on our multiple-day journey back to our starting point, we had left the palace just a few hours before the earthquake struck. (The palace sustained some damage, we were later told.) We had reached a mountain pass at an elevation of 4,200 metres and although we didn't feel anything, we heard several simultaneous landslides in a valley behind us. We wondered at the cause as we stared at the clouds of dust rising from below, never imagining that we were experiencing the far-reaching effects of a major earthquake centred hundreds of kilometres away.

It wasn't until the next morning that we fully understood what had occurred. We hovered around our guide, Krishna, as he spoke to our tour company in Kathmandu by satellite phone. When he looked away after the call for what seemed an eternity, we knew the news was bad. We gasped when he finally turned to us with teary eyes and blurted, "Thousands of Nepali people are dead." Krishna's own family was safe, thankfully, but his family home was destroyed. We suggested making our own way back the final two days so he could more quickly reunite with his family, but Krishna refused to abandon us.

This was the type of generosity and karmic kindness we'd experienced time and again from the Nepali people. There were the small things, such as how, on many cold evenings on our trek, we would be invited into the family kitchen of our lodging tea house to warm ourselves.

On one such night, in the town of Ghami, we sat transfixed as we watched three generations of Thakali women going about their business. The mother and grandmother wore traditional clothes and running shoes. The young niece, in western clothing, was visiting from Kathmandu to help out her family during school break. She assisted her aunt with the preparation of a traditional dinner for us, consisting of fresh vegetable and thick noodle soup (thukpa) and spicy dumplings (momos) over a wood-burning stove. Her bubbliness was infectious. Although the Thakali people practise polyandry (one wife with multiple husbands), the mother in this family lived separately from her sole husband, preferring to run her guesthouse on her own. The wizened grandmother was an absolute delight. At times she sat in a corner praying audibly. "She's asking God to prepare a good place for her because she's lived a long life and knows she will be joining him soon," Krishna explained. At other times she huddled with her grandniece, watching a Bollywood film playing on the girl's smartphone or listening to a Taylor Swift song.

And then there were the big things, such as what happened on the final morning of our trek. An avalanche, set off by the earthquake or an aftershock, left a huge pile of rock fragments along a steep cliff, obstructing our path. The only practical option was to climb over it. But if you scrambled onto the loose pile of rocks, your feet immediately started to sink and slide downward, stones falling audibly over a 40-foot straight drop to a dry riverbed below.

Undaunted, Krishna anchored himself in the sinking stones, firmly grabbed my arm and looked directly into my eyes, imploring me to hold on as tightly as I could. I was at the same time fearful of what I was about to do and moved by my guide's palpable sense of concern for my well-being. He steered me over to the other side at great risk to his own safety and while in the depths of grief.

I was grateful, relieved and humbled. I later realized that, in the end, along with the beauty of the Himalayas, I had also experienced some of the danger. 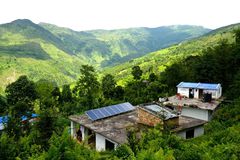 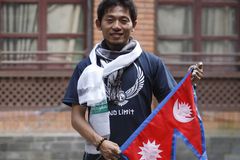