The mountains of Daisetsuzan National Park explode from the earth, thrusting above plains painted lavender in summertime and thick white through the long stormy months of winter. At two colliding tectonic plates, this cluster of volcanic peaks stands sentinel at the heart of Hokkaido, the sparsely populated north island of Japan.

The Ainu, the local indigenous people, called this place kamui mintara, the playground of the gods.

Only a few hours from the international airport near Sapporo - and a world away from the Australian ski tourists who throng to the in-bounds slopes at the Niseko resort region of southeast Hokkaido -Daisetsuzan is a backcountry Eden.

Even for an ardent atheist, it's hard to resist the lure to embrace Japan's animist traditions, the belief that spirits imbue all things. Spirits seem to abound in Daisetsuzan, in the bountiful snow, cold sake and gnarled silver birch trees: effervescent, enchanting and fleeting.

"In the morning, when the place is bathed in sunlight," photographer Koetsu Ichinei writes, "the snow crystals sparkle, and the scene reminds me of fairy tales of trees dancing wildly in stories of Ainu folklore I listened to when I was a child."

Even devotees of British Columbia's Rogers Pass will find themselves amazed by Daisetsuzan. Unlike at Rogers, though, there are hardly any other skiers as we dance through the silver birch, cutting deep through deliriously light fresh powder - "smoky snow," as Noriyuki Watanabe, of Hokkaido Powder Guides, calls it. Like spirits.

Winter storms brew constantly to the west in Siberia, grow fierce and heavy with moisture over the Sea of Japan, and wallop the wall of Daisetsuzan's mountains.

The speed and constancy of the cycles is surreal; a night of swirling snow will ebb to midmorning sunshine, only to be ushered away by another whipping snowfall in the late afternoon. "I've never seen snow fall more, every day, twice a day. If this was Canada, it'd be a zoo," my brother Markus remarks.

Tokachidake ( dake means volcanic peak), an active volcano that last spewed in 1989, is 40 kilometres from the small farming town of Furano and offers the purest easily accessed backcountry terrain in the park. We are the first to forge through the forest to break trail for an ascent of Furanodake. We slog higher on the steep slope, cut a path amid wild arms of frozen dancers - the snow-covered silver birch.

The scale of these volcanic peaks is far less epic than the glaciated Selkirks of Rogers, where ascents can last hours and soar well more than a thousand metres of vertical gain. On Furanodake, we establish a circuit from the river to a ridge top of about 400 vertical metres and hammer five runs on one remarkable day.

On-mountain indulgences are bookended by complementary pleasures upon waking and in the evenings. At Tokachidake, at the end of the road, stands a nondescript three-storey white building: Ryounkaku is one of Japan's many traditional ryokans, inns where guests sleep on simple mattresses on tatami mats and soak in the restorative waters of onsen, the hot springs that bubble through fissures in Japan's long volcanic belt.

Ryounkaku has an excellent onsen, its water coloured rust by iron. But nearby there is a particularly wonderful onsen, the unadorned Fukiage, a short amble down a snowy path from the road. Spirits surely swirl in the steam as water percolates out of the earth amid a forest and falling snow.

Food, of course, is the other delicacy. From miso soup and raw fish for breakfast, to an array of items served omakase-style - chef's choice - at dinner, eating is an adventure equal to time on the mountains.

Farther north in Daisetsuzan National Park is Asahidake; with half its top blown out, a gigantic crater remains and sulphurous white clouds smoulder from gaping fumaroles.

At a peak of 2,290 metres, Asahidake is Hokkaido's tallest mountain. From the base, a tram lift climbs 500 metres. There are two runs from the top station and many more options to duck off-piste; there are also a few routes to pick with climbing skins on backcountry skis or a splitboard (a modified snowboard). A couple of dozen vehicles are in the parking lot on a rare February blue-bird day. This is what passes for busy in Daisetsuzan.

Near the tram station base, a new ryokan called La Vista sells a much more luxurious experience than the more utilitarian Ryounkaku. Heavy with iconography of owls - the Ainu creation myth tells of an owl's claws carving the rivers and valleys of Hokkaido - the La Vista onsen is posh and the restaurant gourmet, from the shariko cocott (cod sperm) amuse-bouche to the local melt-in-mouth Tokachi beef barbecued on a hot plate built into the table.

Ever more distant is Kurodake. Rising from the Sounkyo resort, nestled in a gorge marked by basalt columns and waterfalls, a tram rises partway up the mountain as at Asahidake. There are no official runs of any sort, and the three dozen people on hand one day to maul the deep fresh snow in the tight trees are the biggest crowd that Clayton Kernaghan, an Alberta-raised Hokkaido transplant, has ever seen at "Japan's last frontier."

Then, from late afternoon through the night, a storm pounds down 40 centimetres. In the morning, the prospects of climbing to Kurodake's peak are bleak. An hour later, the sky clears. Beyond our trio, four other people make the trek for the spectacular run from the 1,984-metre mountaintop to the 670-metre base.

"They just get so much snow," American snowboarder Shaun White, two-time Olympic gold medalist, says in an interview. He has visited Japan often and made his first foray to the Hokkaido backcountry for a film two years ago. "It just dumps. It's a really cool place."

Back in Furano, born-and-raised local restaurateur Takeshi Morimoto presides at Kumagera, where twisted bare branches, burnt in a long-ago explosion of Tokachidake and salvaged from a local river, sit atop the stone walls. He has made sake for a quarter-century and serves a selection of seven, from one as clear as a crystalline sky through to the last, smouldering dark.

He insists on two things: Drink the sake cold, and it's always best fresh. It's a delicate thing, something properly cherished at its source, a rarity in an era when everything seems ready for export or import. "Be present," he counsels.

There are temptations to declare spirits real. Three things I know for sure: Spirits imbue Takeshi's sake; the smoky snow and dancing silver birch of Daisetsuzan backcountry's are equal to the best anywhere; and this playground of the gods is one fairy tale that blows away skepticism and leaves nothing but joy, a true believer.

Getting there
Air Canada flies daily to Tokyo. In Japan, Sapporo is a short hop on Japan Airlines. Asahikawa is a smaller industrial city, closer to Asahidake and Kurodake. The town of Furano is closest to Tokachidake. The local tourism bureau is very helpful, as most locals do not speak English. 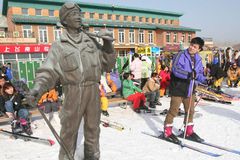 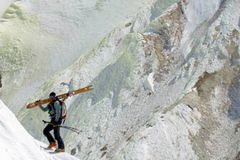 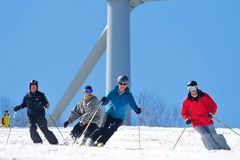