History shows that the efendi – noblemen in the time of the Ottomans – were treated very well. A step inside the 12-room Efendi Hotel in Acre, a port city in northern Israel, and you will get a taste of just how well.

LOCATION
For history buffs, old Acre is a treasure. The city is a UNESCO World Heritage Site and dates back to Greek mythology with many Crusader and Ottoman structures still standing. The hotel is a short walk from the Mediterranean sea, museums, the Crusader tunnels and an ancient market where vendors sell fresh offerings from the local fishermen, fruits and vegetables, and Arabic breads and pastries. It's also a perfect base from which to head out to the northern parts of Israel such as Rosh Hanikra with its mountain views and turquoise blue grottoes.

DESIGN
Opening the boutique hotel has been a labour of love for Israeli restaurateur Uri Jeremias, who spent more than eight years restoring two ancient and adjoining homes to their former glory. The restoration, completed with help from Israel's Department of Antiquities, revealed many of the property's hidden jewels – marble floors, Ottoman arches, stencilled ceilings and quatrefoil windows high up on the walls. But the Efendi is no museum piece. Jeremias added just the right amount of bells and whistles to make it a modern luxury property. Each room is bright with large windows for sea and mountain views, and there are walk-in rain showers, espresso coffee machines, flat-screen TVs and free WiFi.

BEST AMENITY
The Turkish bath treatment at the hotel's 400-year-old hammam is sublime after a day exploring the city. As I lay on the centuries-old heated marble bed, surrounded by marble walls, I noticed slits of blue glass in the magnificent domed ceiling which let in small amounts of coloured light. The effect was serene and calming as I submitted to my esthetician's wash and massage with aromatic soaps and oils.

WHOM YOU'LL MEET
The Efendi mainly caters to European tourists and well-heeled Israelis escaping from the hectic pace of Tel Aviv.

EAT IN OR DINE OUT?
There is no room service, so find a seat at the long wooden table in the dining room to feast on all the specialties of an Israeli breakfast, including cheeses, salads, spiced olives, crusty seed-filled breads and my favourite, labane (yogurt) with the Middle Eastern spice mix za'atar.

Dinners and events are held each Thursday and Friday night in the atmospheric wine cellar with chef Ido Zarmi, who creates menus from an eclectic mix of cuisines– from ceviches and chowders to fish with the Arabic ingredients such as kadayif, the finely shredded dough used in baklava, with tahini, sumac and other local herbs.

And since dinner is not available at the hotel during the week, meet Jeremias's first love – his restaurant Uri Buri, just a five-minute walk away. My advice? Leave the menu in the chef's hands for the best fish and seafood in Israel.

IF I COULD CHANGE ONE THING
There is no parking at the hotel, so you should drop off your luggage first before leaving your rental in the designated lot. It's not far from the hotel but if you don't want to walk, a shuttle is available to take you back and forth.

ROOM WITH A VIEW
If you love the sea, rooms 10 and 11 (also the biggest) have large picture windows looking over the Mediterranean. But the best views of the historic city and the sea is on the hotel's rooftop. A glass of wine and a few spiced almonds were the perfect accompaniment to a magnificent sunset and a little entertainment – hundreds of swallows performing their daily ritual dance.

In Israel, a camping experience like no other
August 29, 2012 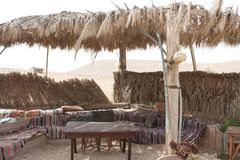 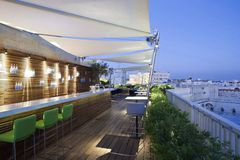 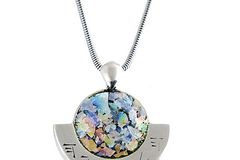