Minutes after sunrise, just north of the equator in Kenya’s Lewa Wilderness, I squeeze into the tiny front cockpit of the WACO, a marigold-yellow open-air biplane, and tug on a leather-flapped aviator helmet just as the engine roars to life. Shearling-lined bomber jacket, check. White aviator scarf knotted at throat, check. Loosed butterflies wheeling through stomach, oh yes indeed. The runway is 500 feet of brick-red African murram – not much more than a postage stamp, it seems to me. But Will Craig, the WACO’s owner and pilot, takes her up, quick and light, and with one audacious wing over past the lodge (run by the Craig family since the 1970s), we’re off over the plain dotted with elephants, our shadow skimming their broad backs like the gesture of a god.

I’ve never been a great air traveller, if you must know. I’m a bit of a sissy, in fact, and routinely greet bouts of turbulence, even in a leviathan Airbus, with cold sweat and repeated just-in-case checks for the airsick bag. But as Will banks us dizzily through a gorge, then noses around to kiss a sheer pink cliff face with one bright wing tip, the only feeling that makes any sense at all is exhilaration.

It’s as though the WACO has taken us inside the skin of the morning.

Brisk air thwaps at my face. Wind and engine noise are loud and everywhere, louder even than the soundtrack of Out of Africa playing in my head. Of course it’s that music come to call. Sydney Pollack’s gorgeous film adaptation of Isak Dinesen’s even more gorgeous book deep-seated Africa as my No. 1 fantasy destination long ago. But it took writing a novel about record-breaking aviator Beryl Markham – another extraordinary woman with roots in Kenya – to get me here. And here, well – here is an extraordinary place indeed. 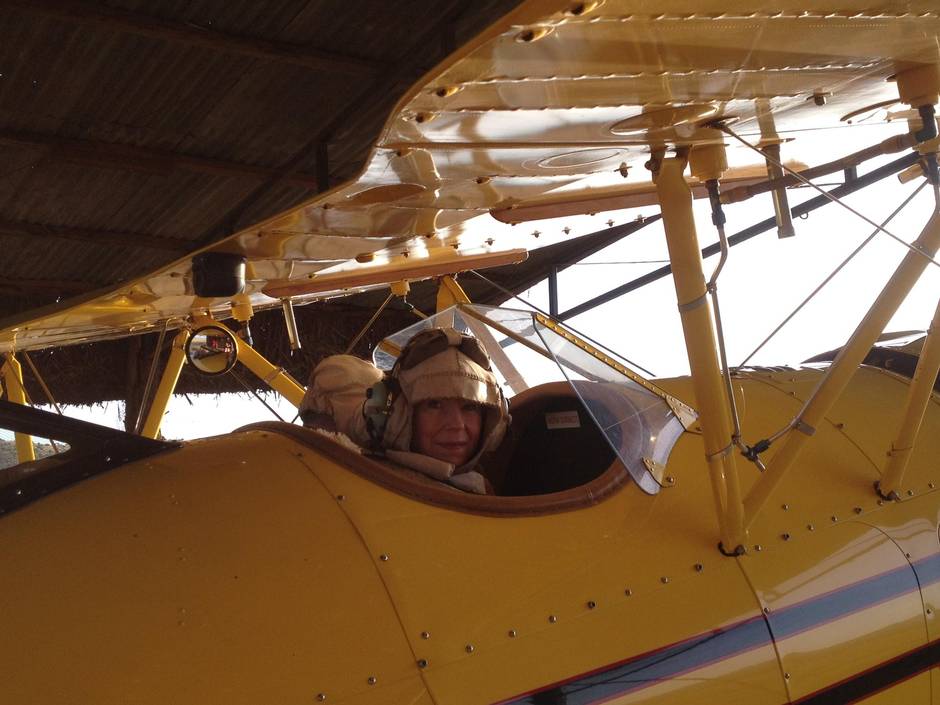 Lewa is situated near Isiolo on the Laikipia Plateau, 250 kilometres upcountry from Nairobi. Stretching south toward the equator, the ribs and ridges of the plains are like a crazy quilt of green and gold and umber. And at the stark centre, the ragged summit of Mount Kenya (Africa’s second-tallest mountain after Kilimanjaro) juts at the sky – an array of volcanic plugs dormant now for some three million years.

From this vantage point, the long, sloping risers that make the mountain look reasonably tame, at least from a distance, are swallowed up by the bowl of the plains. This seems another mountain altogether, made new every morning perhaps, and just for you.

Settling Africa’s northern frontier required boldness and determination in colonial days, and yet Will’s grandmother, Elizabeth Cross, had more than enough pluck. A Women’s Army Corps nurse and ambulance driver in Europe during the First World War, she drew a plot of land in the soldier-settlement scheme and left England for Kenya with not much more than a shotgun and good-luck wishes from her family. She married a Scot, Alec Douglas, who’d trekked to Kenya from South Africa in an ox cart, and the two began snapping up parcels of land around the base of Mount Kenya, and started ranching.

That cattle and sheep operation, first founded in 1922, opened its gates to tourism in the 1970s by Alec and Elizabeth’s daughter Delia Craig, making it the oldest private safari venture in Kenya.

The lodge is set like a raw diamond against the ragged sweep of the East Marania Valley and 62,000 acres of conserved land. There are nine exclusive cottages, a fine pool, decks for stargazing or for staring into the fire and a thatch-roofed plein air communal dining room that might be annoying in another place – I’m just as reclusive as the next person – but at Lewa seems a gift.

‘The runway is 500 feet of brick-red African murram – not much more than a postage stamp, it seems to me.’ (Handpicked Africa)

The handful of other guests who’ve come around the world to be here, as I have, just so happen to be good storytellers. And it also seems more fitting to share awe rather than hoard it.

At lunch, everyone’s eyes are trained on the saw-toothed hillside across the deep valley, where an elephant family patiently zigzags down the steep grade. Their hides work to camouflage them completely – or would, if it weren’t for their unmistakable locomotion, a heavy amble punctuated by the perfect braking system of their cleverly arranged skeletons. Their hind knees, or hocks, pivot forward as ours do, while their forelimbs have elbows and wrists that work to support them solidly on rugged terrain. As an extra bonus, being built this way means they kneel beautifully, and recline like pashas, as if they’re waiting to be fanned, or perhaps worshipped by some mahout.

You can’t ride elephants at Lewa Wilderness, but they do have camels for hire, and also mountain bikes. The lodge, in fact, offers more ways to interface with the land and wildlife than any other safari destination in Kenya, including horseback riding, hiking, zips over the conservancy (or over to the coast for an unforgettable sundowner) in Will’s plane – as well as day and evening game-watching drives.

On my first night, some six hours after I arrive, Lewa gives me my first lion spot. Not one but three … no, five … no, SEVEN adolescent lions so flawlessly camouflaged by the lion-coloured grass they appear to multiply as my eyes adjust to take them in. They’re like a poem in tawny monotone, with powerful haunches and square heads. Their eyes are gold-flecked and kaleidoscopic. Their paws are like great soft mallets. 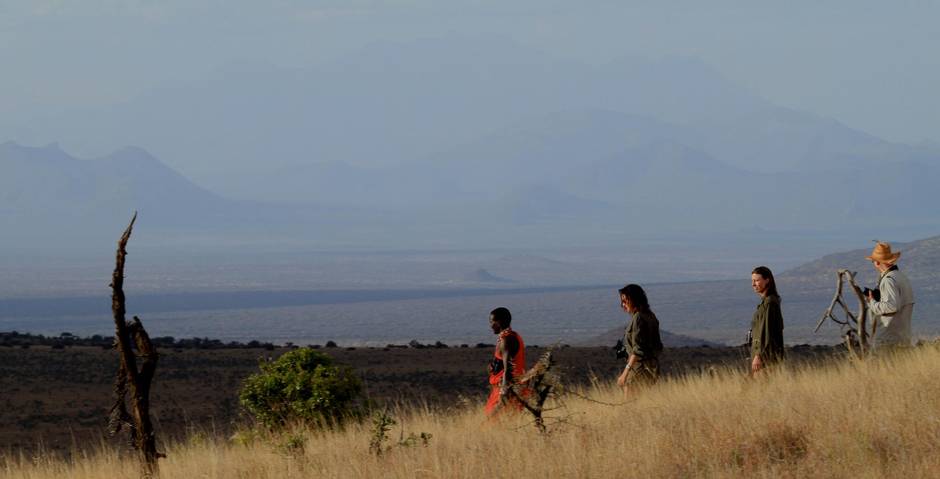 The entire pride is oblivious to our vehicle – a pop-top Land Cruiser – just as it should be. A few other vehicles arrive and cut their engines, and we simply watch the animals in silence not unlike meditation. A Zen of lions. The nearest of the animals is three or five metres from where I’m sitting with my binoculars and notebook, but I don’t feel the slightest shadow of fear.

The circumstances here couldn’t be more different than those that led to the fatal mauling in June of American tourist Katherine Chappell, at Lion Park in South Africa’s Gauteng Province. There, the park is a lion enclosure, accessible to vehicles, with very strict rules. Essentially a zoo you can drive to and through from nearby Johannesburg, without having to plunge hundreds of miles into the bush. Lewa is inarguably the bush, and this land is home to these creatures, who are both so at home at the top of the food chain and accustomed to the safari vehicles that they loll in the grass, hunt when they’re hungry, live their lives. Guests at Lewa are also never without the care and guidance of excellent guides, who provide a steady stream of information about the wildlife and the conservancy, for their safety.

Somehow it seems both strangely proportional and ironic that today’s photographic safaris are as peaceful and profound as their historical predecessors were violent. But the animals are still under threat. Will tells me that since Kenya banned trophy hunting in 1977, 60 per cent to 70 per cent of Kenya’s wildlife has vanished to poachers. Will’s 22-year-old son Joss, a pilot like his father, has aided rangers in searching out poachers on the conservancy … a highly dangerous proposition. Joss also does herd counts by air for Lewa’s rhino program, set up in 1986, to protect Kenya’s black rhino population. Lewa’s sanctuary is one of the most successful rhino protection programs in all of Africa, providing a haven for 12 per cent of Kenya’s critically threatened black rhino population.

One of the best things about staying at Lewa is that guests are automatically supporting the conservancy in all its efforts, including essential ties to the community, and 14 local schools. “The goal is not just to protect the wildlife any more,” Will explains. “It’s about sustainability for the entire region.” Forty per cent of the costs to keep the conservancy up and running come from tourism. The remainder is supplied by organizations such as the U.S. Nature Conservancy and the Tusk Trust, a pioneering charity organization that’s provided funding for environmental and educational programs in Kenya and elsewhere for more than 25 years. 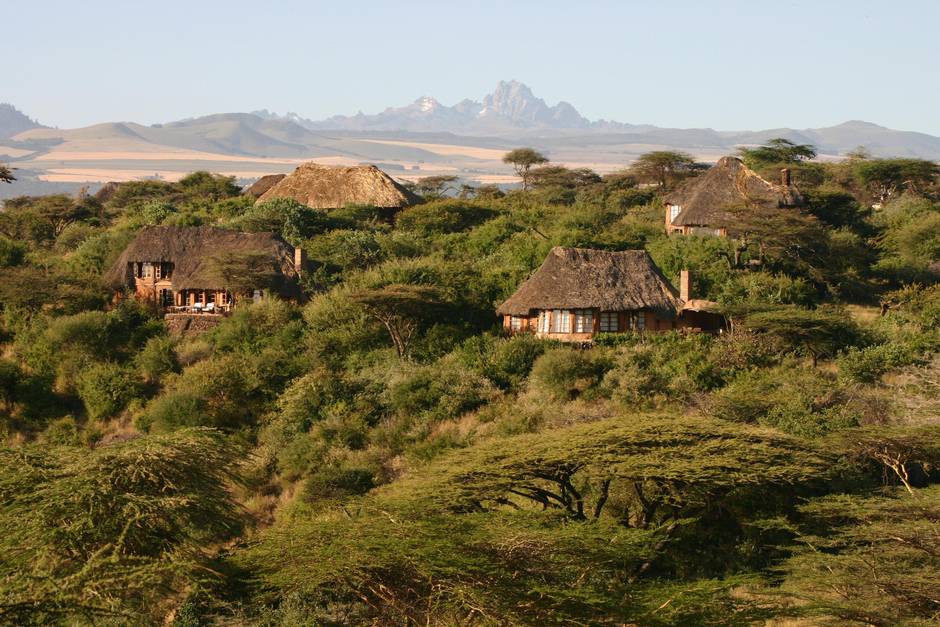 Guests at Lewa can enjoy such activities as mountain biking and plane rides. (Handpicked Africa)

Prince William became the Royal Patron for Tusk Trust expressly because of his ties to Lewa. He and his brother, Harry, visited the lodge once on a family holiday. Later, William came back on his gap year to learn more and get involved, and in 2010, he returned again with Kate Middleton just before he famously proposed to her on the slopes of Mount Kenya.

Somehow Lewa is exclusive enough for royals and inclusive enough to feel like home. The food is smashing but simple. The accommodations are gorgeous, but just rugged enough to remind you’re – ahem – on the far side of the world. The generators don’t run before 6:30 a.m., and so it is that one day, predawn, I wake next to my still-warm hot water bottle, wrapped in its plaid fleece bunting, and take a lukewarm shower by flickering kerosene lamp. From somewhere, I can hear hyenas vocalizing, high breathy calls and yips that might be reporting news, defining territory or merely saying, “I’m here. Where are you?”

Later, in my robe, I find a tray of coffee waiting. The fire has been lit, and the dawn pushed back like mosquito netting. Nothing about this moment is as romantic as Robert Redford washing your hair along a riverbank, surely, and yet it is perfect in its way. I am besotted with Africa – the stars and the colours and the smells, all new to me, and also familiar.

I am addled by the beauty of Lewa, which is perfect the way elephants with their peculiar knees are perfect. And the earthenware bowl of the high plains, and the two-track road stretching off over the horizon into forever and the sun inventing itself again and again – in this place that is like no other.

The writer stayed as a guest of Lewa Wilderness. It did not review or approve of this article.

Lewa’s sanctuary is one of the most successful rhino protection programs in all of Africa. (Handpicked Africa)

Lewa Wilderness is located in the Isiolo district of central Kenya. The lodge, the country’s first private ranch to welcome guests, consists of just nine cottages. Prices range from $795 (U.S.) to $900 per person a night; lewawilderness.com.

Fly from Nairobi’s Wilson Airport to the Lewa airstrip.