Things are a little different in Vico del Gargano.

That becomes apparent the moment you're greeted by one of countless inquisitive stray dogs, or search for a parking space while following a donkey-drawn cart. Behind an unimposing door marked with the words "Il Trappeto," a flight of stairs descends into a cave that's been converted into a restaurant and wine bar. The unexpected comes as standard in the Gargano Peninsula, the ankle spur of Puglia, the heel of the Italian boot.

Puglia does not feature in Rick Steves's guide to Italy, even though the region has spent a decade taking steps to promote its treasures. Its major cities and towns – Lecce, Bari, Brindisi, Alberobello, Trani, Polignano and Gallipoli – are full of architectural and artistic gems, and its food and wine culture is rightfully regarded as one of Italy's best. But even as Puglia's popularity continues to grow (Lecce is a candidate to be European Capital of Culture in 2019), the Gargano Peninsula's remoteness, combined with a distinct lack of sizable towns, ensures that intrepid travellers will never pass through on the way to more celebrated locales. Which is a shame, because villages such as Vico have sights as fascinating as their rusticity.

If the Gargano's relative anonymity does come to an end soon, a large part of the credit will be go to bar and B&B owner Giuseppe Romondia.

Romondia's bar, Pizzicato, is the hub of Vico's social existence – one of those uniquely Italian cafés whose culinary excellence spans coffee, cocktails, patisserie and gelato (and has been officially recognized by Italy's Gambero Rosso bar guide). It was Romondia's idea to expand the family business into an eco-conscious, gay-friendly B&B, and use the English and social-media skills he picked up during a year in New York to spread the word about this undiscovered corner of Italy. (If you're exploring the Gargano online, you'll almost certainly encounter Giuseppe, who has nearly 12,000 Twitter followers.)

"You can still see women on the street doing their washing or making fresh pasta here," Romondia says. "This is a place that still has tradition and deep culture. Someone who grows up here can still play football in the street or in the historic centre. It doesn't mean we're old fashioned. It's a balance between tradition, emotion, relationship and respect. We have a foot in the past and a foot in the future."

In the present, the best way to get around the Gargano's spectacular landscapes is by car. Heading out in any direction from Vico, you'll be driving winding roads blessed with spectacular clifftop views of beaches and medieval towers, plus – for anyone who's endured the white knuckle ride of the Amalfi Coast – a refreshing lack of traffic. The only prep work required is to arm yourself with Romondia's contact book of friends. He seemingly knows everyone on the entire peninsula, and will call ahead to let them know you're coming. It's a service that comes as standard – it's part of being a good host.

And it's what led us to Monte Sant'Angelo, a mountaintop town with views stretching as far as Bari, about 100 kilometres across the water. Its old town is a warren of sun-bleached alleys and stone staircases, blessed with a pair of can't-miss sights.

At first glance, the Sanctuary of Monte Sant'Angelo looks much like any other small Italian church. But walk through its doors and instead of a traditional interior there are only stone steps, flecked with faded frescos, leading down. At the bottom is the sanctuary, literally a cave, lined with chapels and pews containing the devout, delivering their prayers to Western Europe's oldest shrine to the archangel Michael, who reportedly appeared in the cave to the local bishop in 490. For the faithful, it is a profoundly moving experience. For the curious, it is a cold and creepy trip back in time.

Much more modern is Monte Sant'Angelo's other essential stop, the Romondia-recommended restaurant La Taverna Li Jalantuumene. Its unconventional owner-chef, Gege Mangano, was expecting us, and proceeded to theatrically hold court in the dining room between every course, revealing his personal gastronomic philosophy ("I'm not interested in Michelin stars; I cook to my own standards"), and happily snatching food off other diners' tables to show what we could have ordered.

An even more spectacular meal greeted us in Vico the next evening, when Romondia suggested we try the trattoria L'Artistico. Finding an unlit storefront with an unlocked door, we tiptoed inside.

"Sorry, we're closed tonight," said owner Maurizio Tricarico, puzzled as to why two foreigners were inside his restaurant.

"No problem. Giuseppe recommended that we eat here."

"Well," he said with a shrug, "we're having some food for our staff and family. You're welcome to join us."

Thus began a magical evening of grilled steaks and sausages, accompanied by a never-ending stream of red wine and the charming company of the extended L'Artistico family. At the meal's end, Tricarico caught us reaching for our wallets.

"Are you crazy?" he asked with a smile. "You're our guests."

Amazed by the generosity, we returned as paying customers the next day, although the countless plates of their astonishing "sea" and "land" antipasto courses only left room for tiramisu.

It was a memorable meal, but also so much more: The hospitality of L'Artistico's staff serves as a microcosm of the Gargano Peninsula, an untouched chunk of Italy where the only thing you can expect is a warm welcome. The landscapes alone are worth a visit, but it's the people you'll meet who prove that even as Puglia's global reputation grows, there are still magical corners of this country waiting to be discovered.

Bari is the nearest airport to the Gargano Peninsula. Flights arrive on a regular basis from London, Berlin, Paris and all major airports in Italy.

Public transit is minimal at best. There are no online timetables, so to figure out a feasible itinerary visit Ferrovie del Gargano at ferroviedelgargano.com/en. It makes sense to hire a car. All the major companies have offices in nearby Bari and Foggia.

There are countless hotels and B&Bs in the Gargano, mostly concentrated around Vieste, Peschici and Monte Sant'Angelo. Pizzicato Eco B&B in Vico del Gargano comes with the added benefit of welcome drinks and breakfasts in one of Puglia's top cafés and the recommendations of owner Giuseppe Romondia (@PizzicatoEcObEb). Rooms from €25-€45 a person per night; pizzicatobeb.com. 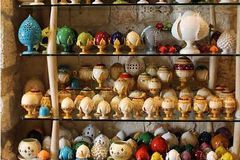 In Italy's heel: wild, but civilized
May 2, 2009
Forget the pasta. This treat is why you go to Italy
June 8, 2011
Follow us on Twitter @globeandmail Opens in a new window
Report an error Editorial code of conduct
Due to technical reasons, we have temporarily removed commenting from our articles. We hope to have this fixed soon. Thank you for your patience. If you are looking to give feedback on our new site, please send it along to feedback@globeandmail.com. If you want to write a letter to the editor, please forward to letters@globeandmail.com.
Comments