Mantova is lovely in the late summer heat.

There! I've always wanted to write that sentence, and now I've done it.

Mantova (or Mantua, as we groundlings have always known it) is, after all, the city to which Romeo was sent into exile; the city in which Monteverdi's greatest opera, L'Orfeo, was first produced in 1607; the city of Rigoletto, a city whose very name seems to have lain latent under your skin in one way or another for as long as you have been able to read.

You cannot see it coming: Mantova bursts upon you like a bombshell from just off the A4, the autostrada that runs east from Milan to Venice: a landscape which looks uncannily like the Okanagan Valley, with miles of flat vineyards on both sides and mountains towering in the distance. No wonder those early Italian settlers in British Columbia felt so at home! But now – suddenly – we veer off and find ourselves in Mantova.

In 1586, the poet Torquato Tasso, he of the most sinuously twisted name, the greatest Italian poet of the Renaissance, wrote: "This [Mantova] is a very beautiful city, and one well worth travelling a thousand miles to see."

And so it is. I have come almost that far and I am not disappointed. Even my first glimpse of the city has been worth the trip.

In a fairy-tale setting of artificial lakes dating back to the 12th century, the approach to the old city is lined with Lombardy poplars which, like gargantuan green-dyed quills, seem to be silently signalling a certain literary presence. It is more like something out of an Arthurian quest than anything else. In this dreamy atmosphere, the air simply shimmers, and you expect to be stopped by knights on horseback at the gates of the ducal palace.

The place has been inhabited since the Stone Age, and will continue to be so until the next one – which, with Donald Trump reaching for the rudder, might not be all that far away.

Within hours, I find myself sitting in the sunlight of the ancient walled garden of the 13th-century Palazzo Castiglione, listening to Canadian author Frances Greenslade explain to a spellbound audience the influence that Margaret Laurence's The Diviners had on her younger self. There is an air of unreality about this. People from the past are felt, rather than seen, to drift in and out of the dappled shadows beneath the sycamores. In the hot summer air, even the birds seem enchanted.

We, the Canadian delegation, have been invited here by the Mantova Festival della Letteratura, an annual gathering which, since its founding 20 years ago by a handful of local booksellers and writers, has now become one of Europe's largest literary festivals.

There are five of us: Frances Greenslade, Jane Urquhart, Allan Stratton, Dany Laferrière and myself.

We are welcomed by a representative from the Canadian embassy, and then turned loose to explore the city.

My own talk – or interview, as it turns out – is to be given in the Palazzo del Seminario Vescovile. I am delighted, when I arrive, to find the cloistered courtyard lined with second-hand book stalls: trestle tables groaning under vellum pages and calfskin bindings, blindingly beautiful books that once must surely have graced the bookshelves of some duke or bishop who has now gone to dust, leaving behind these glorious pages of words and music, all of them, alas, in Italian or in Latin.

I find myself wishing I had paid more attention to those Latin teachers of so long ago.

Elsewhere in the city, in various castles, palaces, piazzas and arcades, hundreds of other writers from around the world are preparing to speak: Sarah Waters, Julian Barnes, Jeanette Winterson, David Mitchell, Charlotte Rampling, Jay McInerney, Edna O'Brien – the list goes on and on and on.

It's one of those rare times you wish you had the power to shatter yourself into shards such as the devil's mirror in The Snow Queen, so that you could take it all in.

In Mantova, there is almost too much to encompass with the eye: Arches are everywhere, left, right and overhead; narrow medieval passages that lead off suddenly to who-knows-where.

Because northern Italy (and Lombardy in particular) is the wealthiest and best-irrigated part of the country, the ancient alleyways are crammed with high-end fashion outlets for the designers in Milan. As the sun sets and the sky darkens, these tiny but exquisite shops are just beginning to reopen for the evening's business.

In the warmth of the growing darkness, we writers will sit in the open squares, picking daintily at our black risotto and tortelli di zucca, the pumpkin-stuffed ravioli which is a specialty of Mantova, the city of Torquato Tasso.

Ten thousand, I should say.

Paddling away from the tourist throngs in Venice
September 29, 2016 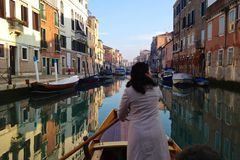 Life truly is beautiful in Tuscany’s underappreciated Arezzo
May 30, 2016
Conservationists help animals – and humans – in Italy's Central Apennines
September 1, 2016
Follow us on Twitter @globeandmail Opens in a new window
Report an error Editorial code of conduct
Due to technical reasons, we have temporarily removed commenting from our articles. We hope to have this fixed soon. Thank you for your patience. If you are looking to give feedback on our new site, please send it along to feedback@globeandmail.com. If you want to write a letter to the editor, please forward to letters@globeandmail.com.
Comments