As in many Turkish cities, life in Bodrum is lived in close quarters, and mainly out of doors, in the streets, cafés and squares.

A stroll along Cumhuriyet Caddessi in this busy coastal city is a perfect introduction to its heady brew of colour and noise. This crowded alleyway, commonly known as Bar Street, is best explored just as the sun is setting, when the heat of the day has lessened, the bazaar stalls are still open, the café tables on the beach are available and the light is magical. Women make gozleme, thin pancakes filled with spinach, cheese and ground lamb, and offer them to customers with a shy smile. Vendors sell glasses of cold, freshly squeezed pomegranate juice.

The city’s narrow alleys are just beginning to attract the evening crowd and at this time of day the mood is cheerfully expectant. Soon, the music will start to ramp up from the many clubs, notably the popular Halikarnas Club. In the harbour, the glass-bottomed disco boats light up and begin to rock to the beat of the latest music.

The dancing will continue until dawn. I know this not because I was boogying until daybreak, but because I could hear the music through the open window of my second-floor hotel room. I’d had to make a choice: If I closed the doors to the balcony, the room was quiet but stiflingly hot. Open, the night breeze kept the room cool, but the sounds of a Bodrum night poured in.

Just as dawn broke and the music faded, sleep seemed a possibility, until the muezzein began calling people to prayer. Roosters began crowing, followed by dogs barking. But who needs sleep when your surroundings are so interesting? 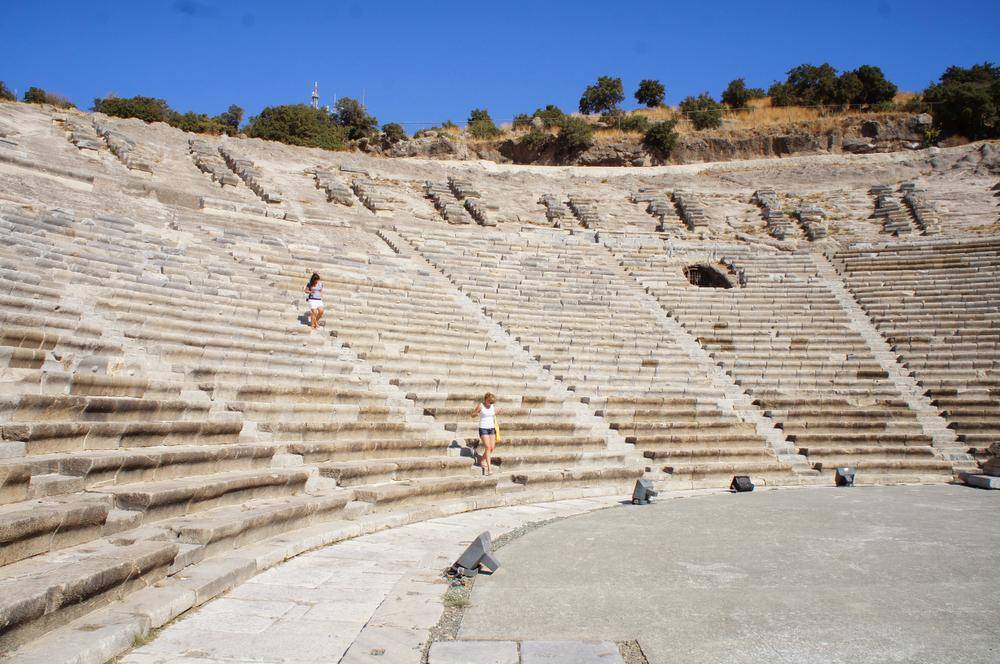 Bodrum, known in ancient times as Halicarnassus, was once a quiet village, home to fishermen and sponge divers. It became a popular holiday destination in the 1970s and now is the beach-party place for young jet-setters from Istanbul and Europe, as well as an upscale yachting destination. The city offers expensive amenities for the boating crowd, and affordable ones for backpackers, hikers and beach lovers.

Despite its party reputation, Bodrum is richly layered, especially for those fascinated by history and architecture. Its most notable feature is the 15th-century Castle of St. Peter, built by the Knights Hospitaller and home to the Bodrum Museum of Underwater Archeology. The city also offers a well-preserved amphitheatre (which stages concerts by Turkish entertainers such as pop singer Sezen Aksu in the summer).

On a quiet street in the upper town, the Myndos Gate sits anonymously between a hotel and a cemetery. It was the scene of a fierce battle when Alexander the Great attacked the city in 334 BC.

A visit to the ruins of the tomb of King Mausolus is a must-do. One of the Seven Wonders of the Ancient World, the chamber he had built for himself originally reached 41 metres and was topped by an impressive statue of a horse-drawn chariot. (This flamboyant demonstration of self-regard gave us the word mausoleum.) The structure was ruined by earthquake and its walls and adornments were used to build the castle, or were taken for display in the British Museum. Only broken fragments remain, although the Turkish government is investing in developing the site and recreating part of its glory. It is an impressive place to visit, and the exhibition rooms on the left as you enter the site tell a good story. 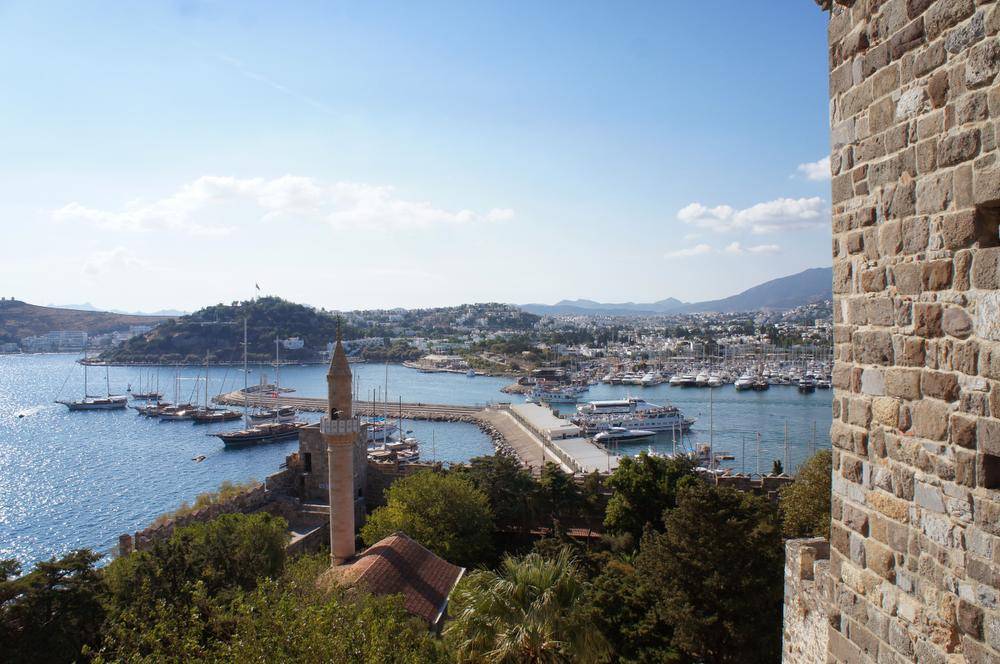 Bodrum is roughly divided in half by the castle. On one side is the raucous fun of Bar Street; on the other, a more decorous neighbourhood lined with marinas, yachts, designer shops and restaurants with patios overlooking the sea and marina. Customers can choose their fish from iced carts and, minutes later, enjoy it freshly grilled, splashed with lemon juice and olive oil. I dined on meze (small dishes) of grilled calamari, octopus salad, fava beans with garlic and roasted eggplant, followed by fresh fish and topped off with baklava and a cup of thick, sweet Turkish coffee.

Away from the beach area, the city sprawls over a low hill, criss-crossed by narrow streets lined with white houses with blue and green doors and shutters, and splashes of flowers. The amphitheatre at the top of the hill gives a magnificent view of the harbour, and the Myndos Gate is just a walk away.

Bodrum serves as the gateway to the Turkish Riviera and is the jumping-off point for many of the gulet cruises that ply the Mediterranean coast. These wooden sailing vessels can be booked for day trips or extended voyages. It is also easy to book day trips to some of the ancient sites along the coast such as Ephesus, Iasos or Pedesa, or hop a bus to neighbouring towns and archeological sites. Or just find a chair in the sand along Bar Street, and enjoy the sunset with a cold Efes beer.

At whatever level you choose to enjoy Bodrum, high or low, active or passive, you’ll be ensnared by its charm: 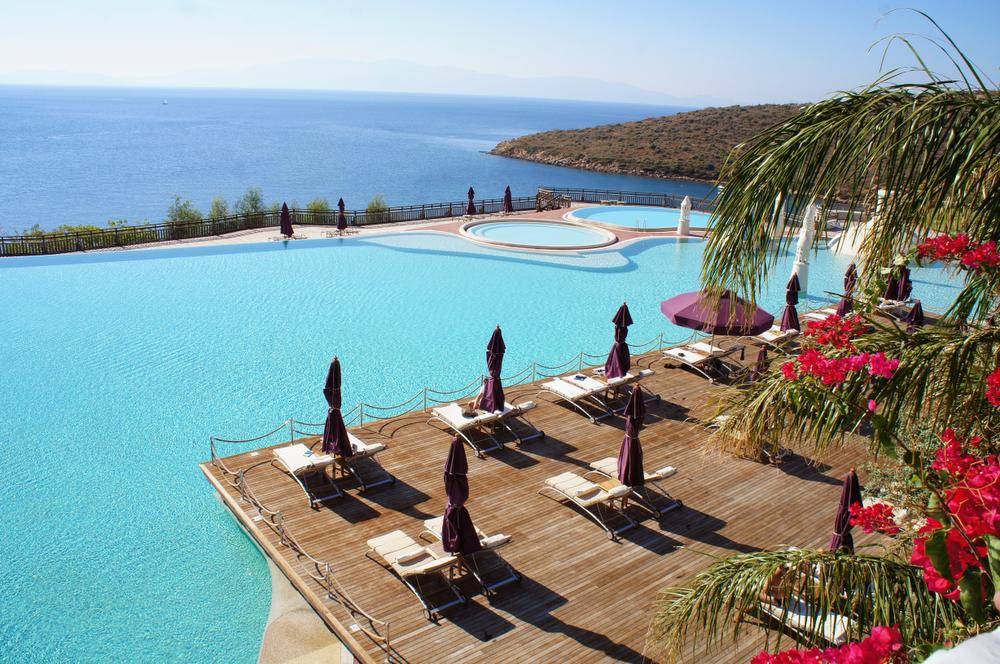 The Kempinski Hotel Barbaros Bay has a beautiful infinity pool that looks out over the Aegean and its yachts, and stylized fairy-tower minarets rising out of the water. There are three restaurants, a sandy beach area with water sports, an excellent spa that offers an authentic hamam (Turkish bath) experience and soaking pool, and a shaded and curtained lounging pavilion. The hotel is a 25-minute drive from town, but serviced by bus. From $177 a night. (kempinski.com)

Su Hotel bills itself as Bodrum’s “secret oasis” and is eccentrically charming. It offers flower-filled grounds, clean but basic rooms, excellent food in its open-air restaurant (fresh and authentically Turkish), and guests who are novel-worthy. A taxi drops you at the side of the street and you pull your bags along a blue-tiled pathway leading to the hotel. Sit in the open-air bar at night and enjoy a glass of wine, with a view of the pool and garden. The conversation, I guarantee, will be memorable. It makes you forget that there is no air conditioning and the beds are on the hard side. From $98 for one person, including Turkish breakfast (olives, cheese, fruit, honey and bread). (bodrumsuhotel.com)

Orfoz, just down the street from the famous and noisy Halikarnas Club, is a small but discriminating seafood restaurant. There’s no menu – you are served what is fresh and best out of the sea that day. It’s wise to reserve ahead. (orfoz.net)

At Gemibasi Restaurant, you can take a seat on the open upper balcony and watch the sunset over the marina, and the well-dressed crowd below. The food is fresh and simple. Diners choose their starters from a table in the back and their fish from an iced counter. A complete, fat John Dory, grilled and served with lemon and olive oil, was superb. (gemibasi.com)

The covered, upscale Milta Marina Shopping Mall stretches along the yacht harbour and contains many of the big shopping names that you see everywhere, but also some good local clothing stores.

On Fridays, there’s a massive farmers’ market near the bus station that is really worth a visit. You probably won’t be interested in buying fruit or veggies, but the abundance and variety is amazing. This is a good place to find pul biber (the Turkish mélange of ground red peppers and spices) or lokum (a local version of Turkish delight with pomegranate and hazelnuts).

The bazaar along Bar Street is partially covered, with narrow walkways. This is the place to find designer knock-offs, cotton dresses, shoes and leather goods and souvenirs (charms to ward off bad luck, decorative bowls, olive oil soaps). It’s busy and fun and if you get overheated, the beach and café tables in the sand are nearby.

July and August are the busiest and hottest months to visit Bodrum. June and September are cooler, less busy times.

Turkish Airlines (turkishairlines.com) flies direct from Toronto to Istanbul, with connecting flights to Milas-Bodrum Airport. Shuttle buses and taxis will take you into the centre of Bodrum, a 35-kilometre ride.

The writer was a guest of the Kempinski Hotel Barbaros Bay, which neither reviewed nor approved this article.