The paparazzi camped out front of the hotel are completely unfazed by my comings and goings. They're more enthusiastic about London TV host Nick Grimshaw, model Daisy Lowe and boy band heartthrob Harry Styles who are all here to celebrate the birthday of current "it" girl, Alexa Chung. The doormen who keep the photographers at bay take it all in stride, and even the crowds in the lobby at the Edition, London are nonplussed by yet another celebrity making the scene. If there's such a thing as an "it" hotel, this collaboration between celebrity hotelier Ian Schrager and the Marriott group is it. The lobby is heaving, the restaurant nearly impossible to get into at peak hours, and the wood-lined rooms as cool and seductive as a Bond vixen.

While officially in Fitzrovia, the hotel feels aesthetically and temperamentally inclined toward the edgier, flashier and more nocturnal Soho neighbourhood it borders. Nonetheless, the W1 postcode places it firmly in the heart of central London, just steps from the Oxford Circus and Tottenham Court Road tube stations.

Designed by Yabu Pushelberg (who also collaborated with Schrager on the Edition Istanbul), the hotel is a dynamic combination of restored, original details and luxurious, modern pieces. A grey-topped pool table holds down a corner of the lobby, an equestrian photograph from Dutch photographer Hendrik Kerstens – whose work is also featured at Schrager's Public hotel in Chicago – is mounted above the fireplace and a huge mirrored egg sculpture hangs from the ceiling. Wood panelling lines the rooms, offsetting the crisp, white beds draped with faux-fur throws.

The Punch Room, a "secret" bar at the back of the hotel, is a plush and relatively tranquil reservation-only hideaway. Here guests can sample the hotel's signature Edition Punch, a potent gin-based tipple with jasmine tea and oak moss. But if that's too sedate, try the hotel's soundproofed basement disco; it has no tables or chairs (to encourage dancing) and serves spiked drinks from a slush machine.

Celebrities, fashion models and the haut monde of London's arts and media crowd. It's not all scenesters, though; a few families were spotted in the elevators and one day a slightly bewildered looking backpacker was seen wandering the lobby.

Don't let the name fool you: Berners Tavern, named in honour of the previous hotel that occupied the space, is no dank pub. If the ceilings were any higher, clouds would form. High-relief plaster work and a gold-backed bar that echoes the multitude of gold frames on the art-clustered walls make this one of London's most dramatic restaurants. Chef Jason Atherton's modern British cooking allows for some international influences: Orkney scallops are served as a bright ceviche, designer steaks are joined by impeccable duck-fat chips and Atlantic halibut rests on squid-ink risotto. Book early – reservations are hard to secure even for hotel guests.

South-facing rooms look out on the London Eye and the rooftops of Soho while those on the North overlook the distinctive BT Tower. Balcony rooms feature cast iron bistro tables and comfortable chaise longues.

Where to catch the next big act in London
February 7, 2014 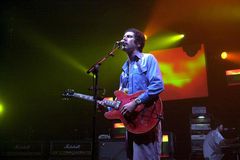 Your butler will do anything, absolutely anything, at this London hotel
November 8, 2013 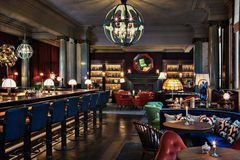 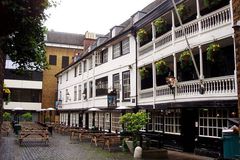