The three-tiered tray was piled high with smoked-salmon sandwiches and marzipan mushrooms, clotted-cream scones and cookies iced “EAT ME.” Playing cards, a red-soaked paintbrush and a miniature top hat were strewn about my place setting. All I was missing to make the Wonderland-themed tea complete was a dozing dormouse – although my napkin had been folded neatly into the shape of a white rabbit.

I had come to Oxford to celebrate the 150th birthday of Lewis Carroll’s Alice’s Adventures in Wonderland: the tongue-twisting, beloved children’s book known around the world. Perhaps suitably for the author of a novel in which up is down and right is left, in which a caterpillar smokes a hookah and a baby turns into a pig, Carroll’s name wasn’t really Carroll. Nor was he, by profession, a writer. His name was Charles Dodgson, and he was a mathematics professor who lived for most of his life at Christ Church, Oxford, where I now sat (and, with only slight trepidation, sipped from a miniature jar labelled “DRINK ME”).

Dodgson came to Christ Church as an undergraduate in 1851. The college, by then, was already more than 300 years old; Cardinal Thomas Wolsey founded it in 1524 and, after the cardinal’s fall from grace, King Henry VIII took over. From a portrait, the monarch still looms over the college’s High Table today. It’s not hard to imagine Henry, the infamous executioner of two of his wives, crying, “Off with her head! Off with her head!” – not unlike Dodgson’s crazed Red Queen. (Nor is it hard to imagine any royal trial carrying on like that under the King and Queen of Hearts, one in which the King exhorts a witness, “Give your evidence and don’t be nervous, or I’ll have you executed on the spot.”) 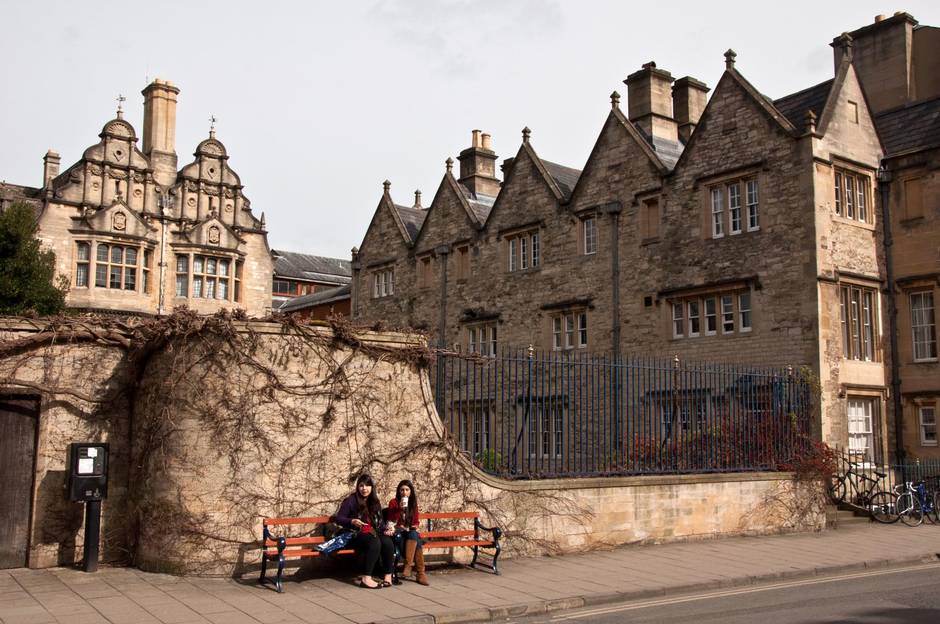 In 1855, Henry Liddell became the college’s dean. Dodgson became a close friend of his family, particularly his three little girls: Lorina, Edith and Alice. (Some researchers have said he may have been too close. In the absence of any evidence, however, and with Alice herself recounting the relationship as innocent in her old age, those theories remain speculation.) Dodgson loved photographing the girls – he had a passion for gadgets, cameras in particular, and even had his own darkroom at the college – as well as telling them fantastical stories.

One of those stories, of course, became the kernel of the book that has sold millions of copies. One day in 1862, often said to be July 4, Dodgson took Alice and her sisters on a rowboat ride for a picnic down the River Isis. While rowing, he told them a tale of a little girl who, while half-dozing on the riverbank with her sister, suddenly saw a white rabbit run past her with a pocket watch – and followed him right into a rabbit hole to Wonderland. Alice begged him to write the story down for her. 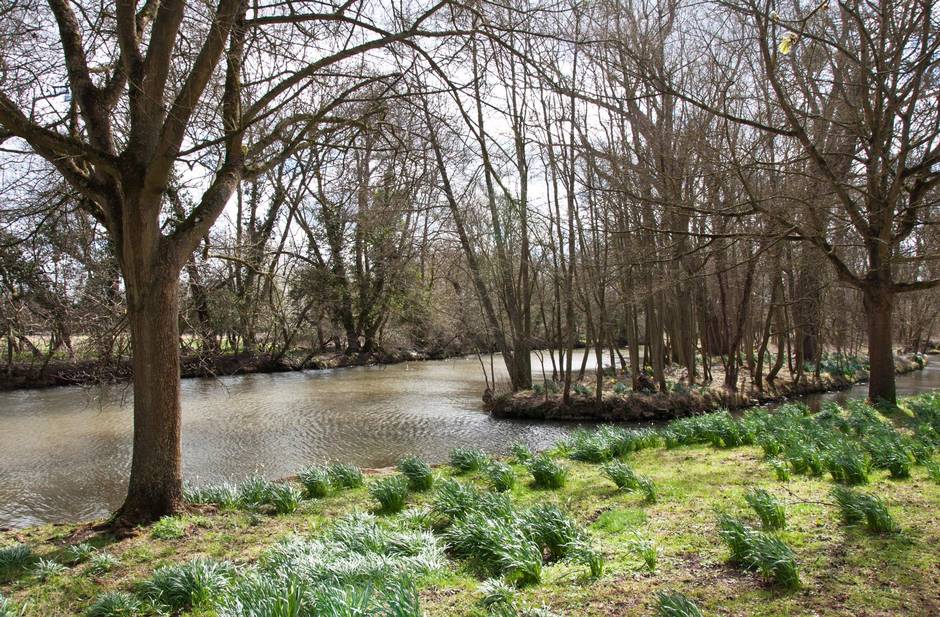 Charles Dodgson is believed to have woven his tale about Alice and Wonderland during a boat ride on the River Isis.

Three years later, copies of it hit bookstores in England.

But the boat trip wasn’t Dodgson’s only inspiration for the story. As I began an Alice-themed tour of the Christ Church grounds, the 17th-century clock tower chimed. Our guide pointed out the college runs, literally, at a different time from what we have on our watches: Since technically Oxford is five minutes off Greenwich time, the college’s clocks have moved at a different time from London’s for centuries. Even today, church services are still held at 9:05, not 9. In other words, if you have your watch set to Greenwich time, you’ll always be five-minutes late – like the white rabbit. (Alice’s father, the dean, was also known for being frequently late, making him perhaps Dodgson’s inspiration for the pocket-watched animal.)

Other hints of Alice – and examples of how Dodgson’s mind may have turned everyday details into entertainment – hide throughout the grounds. There is the particularly striking tree just around the back of the college, called a Syrian plane tree, that has such massive, twisted limbs that, if you squint, it looks just like John Tenniel’s original illustrations of the Jabberwock. (As the tree was planted in 1620, Dodgson certainly would have noticed it.) In another of the drawings from Through the Looking-Glass, in a section where Alice is “standing before an arched doorway, over which were the words QUEEN ALICE in large letters,” the illustration, complete with the arch’s particular carving, is lifted straight from the college’s door into the Chapter House. 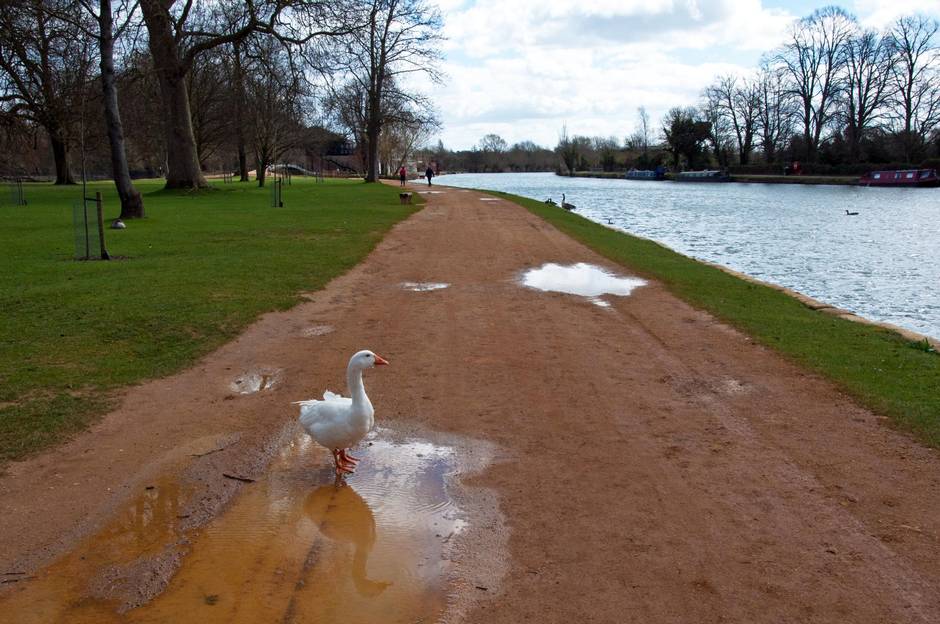 Along the River Isis.

More moving, though, is a nod to the Liddell family that has nothing to do with Dodgson at all. In the college’s cathedral, a striking, soaring space that dates back to an eighth-century Saxon church but was largely rebuilt in the 16th century, is a stained glass window of St. Catherine. The saint is a portrait of Edith – Alice’s sister, who was also one of the girls on the boat trip – who died suddenly at age 22, shortly before she was to be married.

A book as bizarre as Dodgson’s, though, doesn’t easily lend itself to finding specific biographical details, even in a place where he lived for 47 years. Instead, finding Wonderland in Oxford means using your imagination.

My pocket-sized version of Alice’s Adventures in hand, I left the college behind to wander the Christ Church meadows. The air smelled green. Fluorescent shoots, their daffodil buds just starting to yawn, rose thick along the riverbank. It was still early spring and the leafless arms of trees stretched against the sky. In the distance, I saw the fairy-tale crenellation of Merton College, founded in 1264. Oxford was, after all, the “city of dreaming spires,” or so it was called by the poet Matthew Arnold. I could see how a place like this would light up the imagination of a child – or a writer with a childlike imagination. 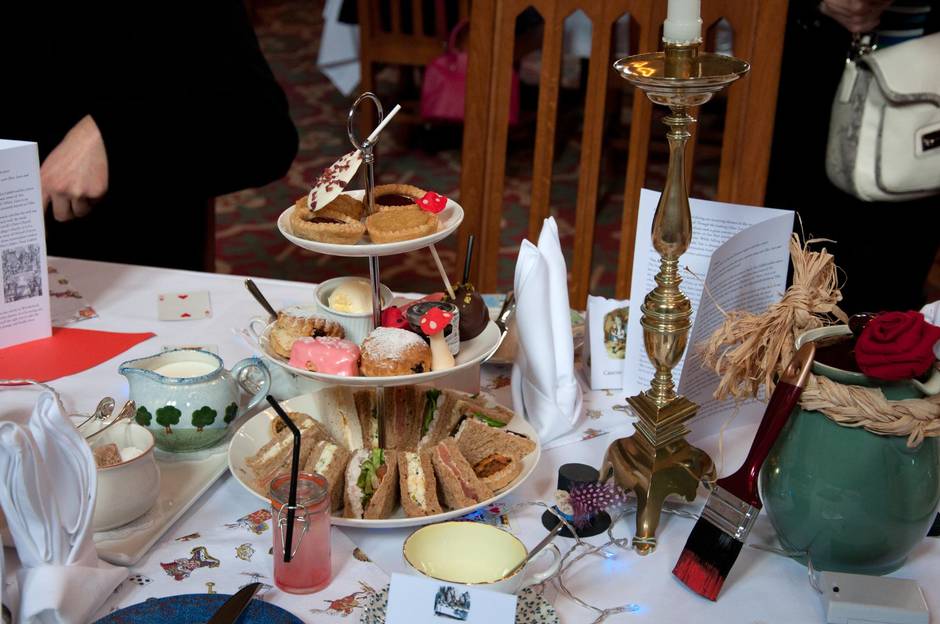 Playing cards, a red-soaked paintbrush and a miniature top hat are strewn about at a Wonderland-themed tea place setting.

And, perhaps, even lend itself to stories that are especially fantastical, set in surreal worlds governed by their own rules. Because that, in many ways, is what Oxford is, too: a place where walking on the grass is forbidden, where port always gets passed to the left, where May Week is in June, where the clocks run five minutes ahead. It’s unsurprising that it has stood in not only as inspiration for Dodgson’s bizarre Wonderland, but also for other fantastical places. Much of the Harry Potter series was filmed here, particularly at Christ Church; the nearby Botanic Gardens play a role in Philip Pullman’s His Dark Materials; C.S. Lewis and J.R.R. Tolkien both were professors here. 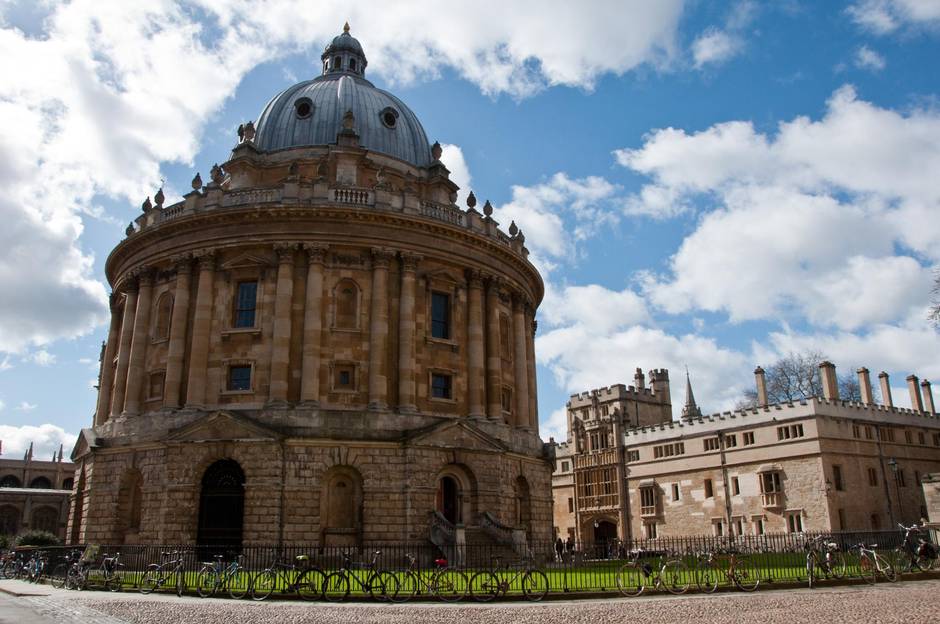 Charles Dodgson came to Christ Church as an undergraduate in 1851.

Now, as I walked along the river, an enormous goose crossed the path in front of me, less than a metre away. It stopped and looked me straight in the eye. I stared back, thinking I’d never seen one venture so close to a person, so unafraid. Beyond, a weeping willow drowsed in the wind. I thought about how, at the end of Alice’s Adventures in Wonderland, Alice wakes up, telling her sister, “Oh, I’ve had such a curious dream!” After she runs off, her sister stays on the bank, thinking about the tales. As a result, Dodgson writes, “The whole place around her became alive with the strange creatures of her little sister’s dream.”

I could tell how she felt as the goose and I stood there. Suddenly, it opened its beak and let out a loud, warning honk. I started to laugh. For a moment, I realized, I’d half-expected it to speak. I was, after all, in Wonderland.

The writer was a guest of Christ Church College for the Alice tea and tour. It did not review or approve the story.

In honour of the 150th birthday of Alice’s Adventures in Wonderland, events are going on throughout the year in Oxford – as well as throughout the world.

In Vancouver, Alice goes flamenco: The Vancouver Playhouse has a Karen Flamenco interpretation of the tale running July 4 and 5. karenflamenco.com

Christ Church and Oxford are also celebrating “Alice’s Day” on July 4. Christ Church Library will host an exhibition of Dodgson’s photographs, while the Story Museum has organized a host of child-friendly events around all 12 chapters of the tale, including croquet with the “Queen of Hearts” (storymuseum.org.uk). There are also Alice-themed walking tours; see visitoxfordandoxfordshire.com for details.

Among events in London is an interactive “Wonderland” beneath Waterloo Station. alice.alice-underground.com.