In Marbella – a long-time stomping ground for the rich, famous and tanned – the sun shines 300 days a year, lunch is a decadent beachside affair and bougainvillea colours the old town

“It’s a beautiful day today!” a bellhop at the Marbella Club Hotel tells me, maintaining the charade that there is ever any other kind.

The city got its name when Queen Isabella La Catolica, while travelling through southern Spain, stopped halfway between Malaga and Gibraltar, beheld a sun-sequined sea and declared: “Que mar bella!” Marbella has since been the resort town of choice for European leisurati, where the beautiful and deeply tanned come to wear linens and espadrilles and acquire further sun damage. Spanish playboy Prince Alfonso von Hohenlohe, sharing Queen Isabella’s affection for the area, originally opened the MC hotel as a 20-room playground for his friends: Princess Margaret stayed here to frequent local flamenco bars under an alias (Molly Brown); Omar Sharif came to play backgammon and bridge in the Med breezes, and Sean Connery came to ski the Sierra Nevada and escape the rigours of stardom and extreme wealth. 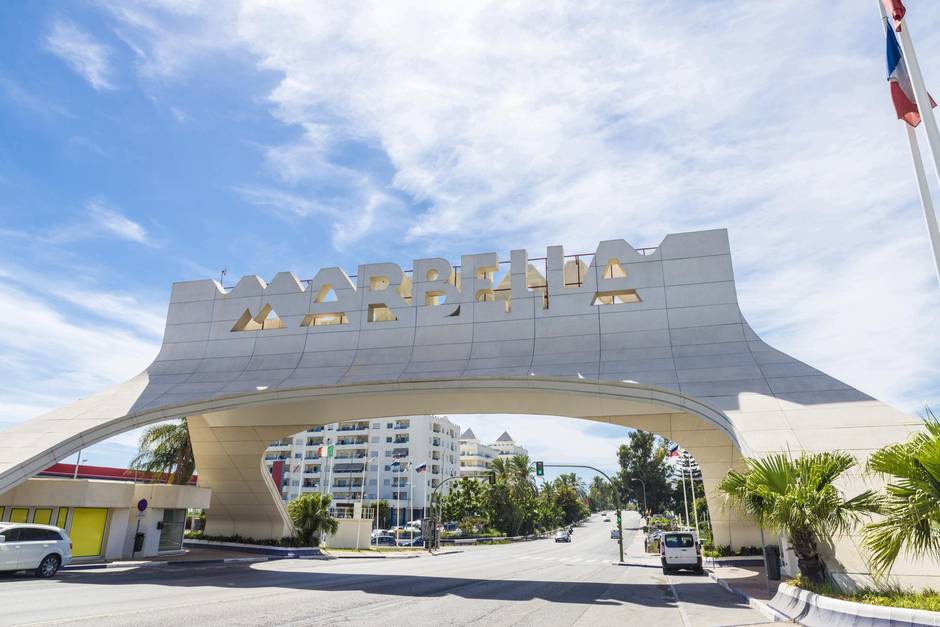 I did not, alas, come for those reasons. I came to Marbella with my husband, my parents and my then five-month-old baby, Leo, for a two-week vacation. We rented an apartment near the beach, and spent a couple of nights at the hotel. The property still feels as much like a private estate as it does an Andalusian castle. “Paradise is a blend of privacy and gardens,” Prince Alfonso once said, and the hotel’s sub-tropical gardens are the stuff of storybooks. As I wandered about the orange-blossom-scented pathways, under the shade of fluffy pink oleander trees, Mediterranean cypresses and Phoenix palms, I felt like Ferdinand the Bull – the star of the classic 1930s Spanish children’s book (my favourite). I could have spent the entirety of my stay flower-sniffing. I passed by a giant African acacia tree, lit an almost gaudy gold under the midday sun; Prince Alfonso, after a jaunt to Africa, had, evidently, brought the tree here when it was a baby. It has thrived ever since its arrival. Frankly, who wouldn’t thrive in this environment, lavished as it is in 300 days of sunshine which seems to sparkle like Cava through silvery olive groves. 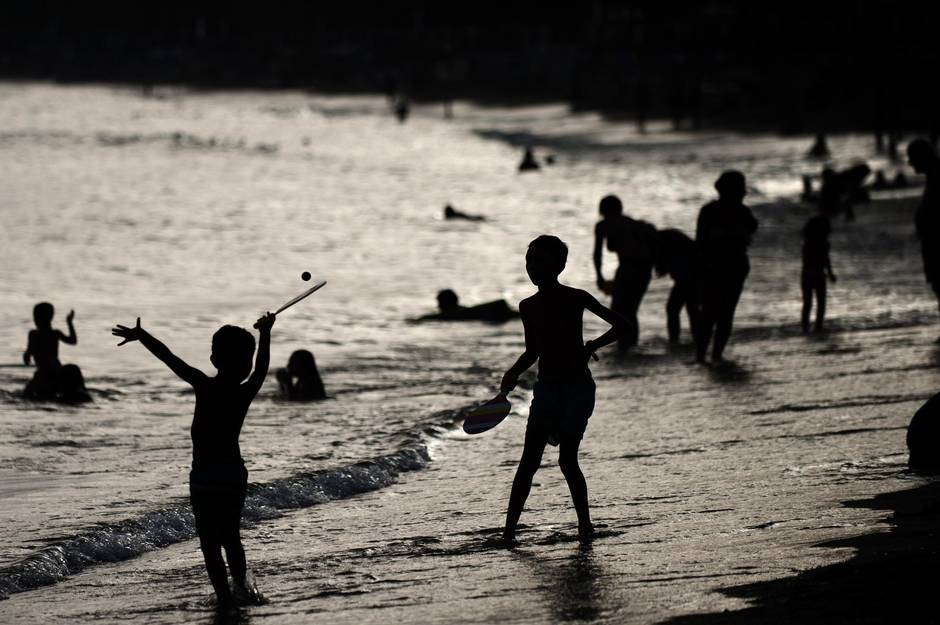 Children play with rackets and a ball on the shore at Marbella beach on August 9, 2015. (AFP / Getty Images / Jorge Guerrero)

But the acacia was not the only baby to enjoy this place. I was nervous about travelling with an infant for all the obvious reasons. But it turned out that, if Marbella is a playground for the pampered classes, it’s also an ideal place for those in Pampers. Here, babies seem to abound with the bougainvillea. Children are – and are welcomed – everywhere. At the MC’s fine-dining establishment, the sort of place where entrees are still theatrically presented under stainless steel cloches, Iberian toddlers in Bonpoint join their parents for dinner (no earlier than 10 p.m.). Meanwhile, at the exceptional beachside restaurant, MC Beach, I watched a father and son have lunch. You do not come here for a mac-and-cheese children’s menu. The father, sporting the sort of suntan you can only get from a lifetime of hard leisure, and his deeply bronzed eight-year-old son (sun block is about as rare in these parts as a case of seasonal affective disorder) enjoyed a parade of grilled sardines, paella, gambas al ajillo and jamon serrano. Surrounding the pair was a parliament of half-finished drinks – a cortado, sparkling water, Spanish sherry – remains of a well-savoured afternoon. 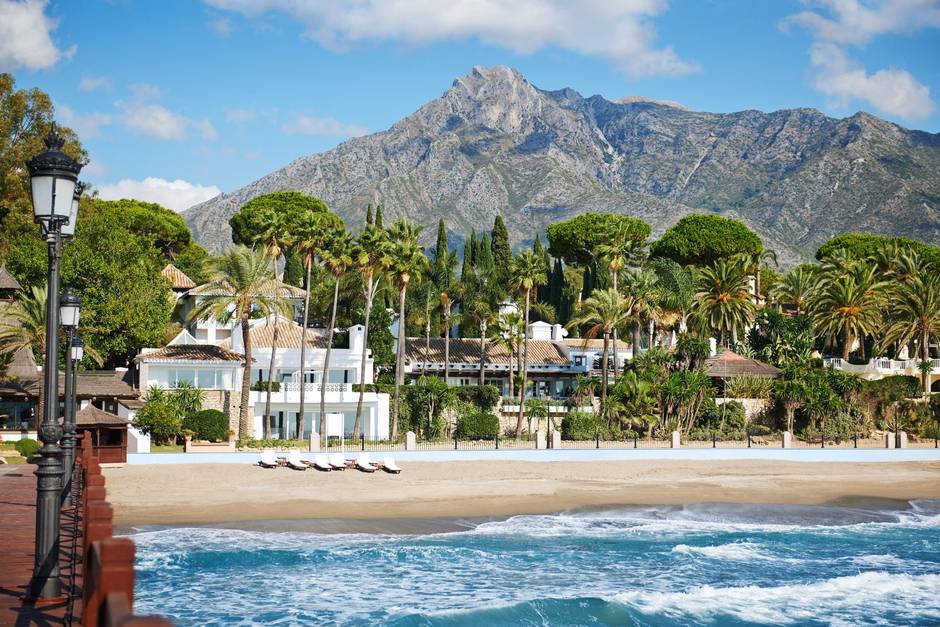 The beach at the Marbella Club Hotel. (Handout)

The best feature of this beach are the chiringuitos (beach bars) that embroider it. La Milla, the latest addition to the strip, serves up a superb assortment of baby clams, grilled octopus, pan con tomate, Andalusian gazpacho. Despite the beachside bounty, it’s also worth a wander into the Casco Antiguo, the city’s old quarter. Here, the tapas bars and knots of cobbled streets, glutted with classically Andalusian tapas bars, the kind adorned with jamon and black-and-white pictures of celebrated 1960s bullfighters.

We headed first to the 60-year-old El Estrecho, hidden on an appropriately narrow street where white-washed buildings are heavily curtained in bougainvillea gone wild. Here, we partook in jamon iberico (cured ham) and boquerones al limon (fresh anchovies and lemon) before proceeding for tapas at Bodeguita el Callejon for more. Here, Euro babes, still fresh from their siestas, were snacking on calamari in their strollers at midnight. (The Spanish schedule is designed for babies, since adults and their children take to their cribs for a nap in the afternoon.) I should add, that we were not so hip and had entrusted baby Leo in the care of a hotel nanny. This was actually the first time my husband and I had gone out alone since our baby was born. There’s a photo of us (snapped by the nanny in question) in which we look somewhat insane from a mixture of joy, anxiety, and the particular derangement of advanced exhaustion. 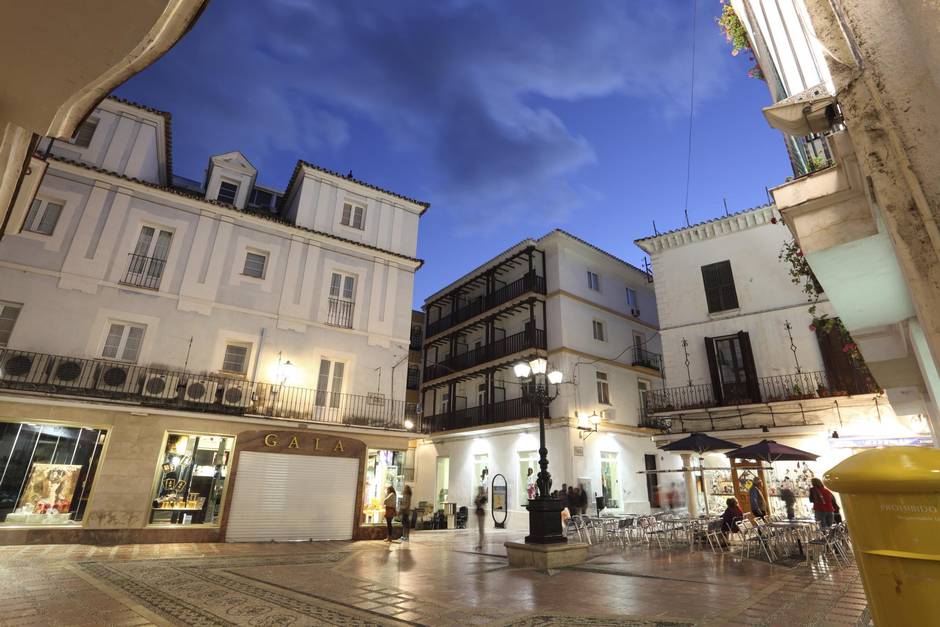 Delightful and gluttonous as all this was, the most memorable day was spent visiting Belvis de las Navas, an olive oil estate in nearby Istan. The place is perched in the Sierra de las Nieves, its very name absurd as those slopes have never met a snowflake. The estate is owned by Sandro Gamazo Hohenlohe, a descendant of the Marquesa de Belvis de las Navas (Prince Alfonso’s mother). Gamazo Hohenlohe greets us at the enormous jade-green door of his estate in geranium-red pants and a sky-blue button down. He has the kind of glint-eyed, floppy-haired charm of a Spanish Hugh Grant (in the days when such a comparison was a compliment). Gamazo Hohenlohe grew up in Marbella, and he offers summarily of his childhood. His wife interjects: “He doesn’t want to say, but he grew up right next to the Marbella Club Hotel. He knew all the gardeners!”

When Gamazo Hohenlohe, once in the wine export business in La Rioja, settled here with his wife and little girl a few years ago, he decided to tidy up the olive groves on his property. “It was Jurassic Park,” he says of the primordial landscape, “it was a lost world. These olive groves had been sleeping for 40 years, but we brought them back to life.” 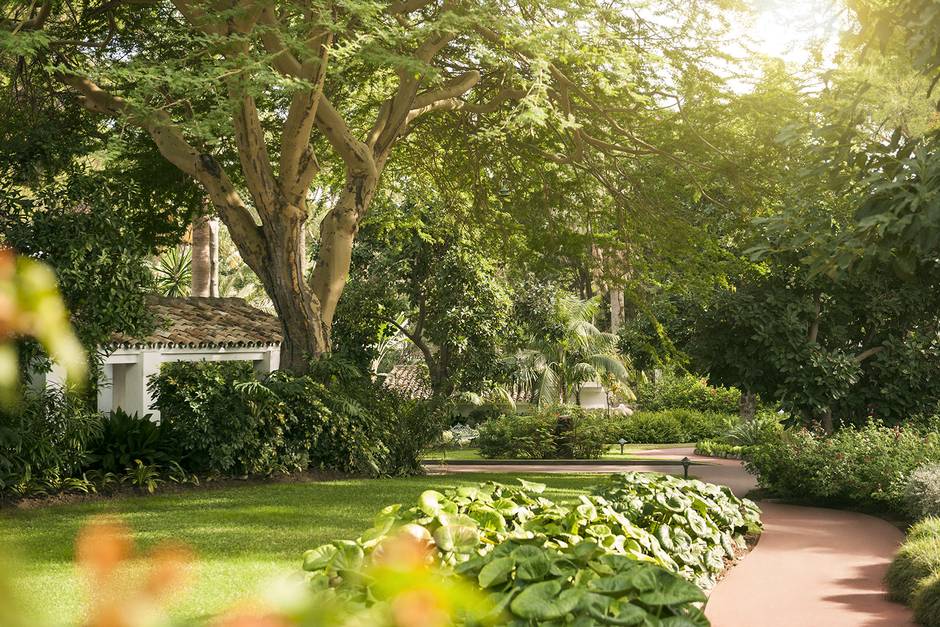 In the gardens of the Marbella Club Hotel, orange-blossom-scented pathways weave between oleander trees, Mediterranean cypresses and Phoenix palms. (Handout)

He pauses to take a leisurely sip from a tiny glass of his own provocatively delicious olive oil, the first certified organic olive oil on the Costa del Sol. The 800-year-old olive trees, he discovered, produced a very rare variety of wild olives. “Old trees are the least productive but the oil is the best. A good wine is an old wine,” he says, smelling the oil from his glass. “You smell the olive oil the same way that you would smell wine. You can smell tomato, artichoke, green grass, a summer harvest. It’s green! It’s alive!”

Initially, he had no interest in getting into the olive oil business. Spain produces 49 per cent of the world’s olive oil and 1.6 million tonnes of olive oil a year. “There’s too much competition here,” he says. “You drive from Marbella to Madrid, for hours, and all you will see are olives. It’s normal. But, hello?!, it is special.” 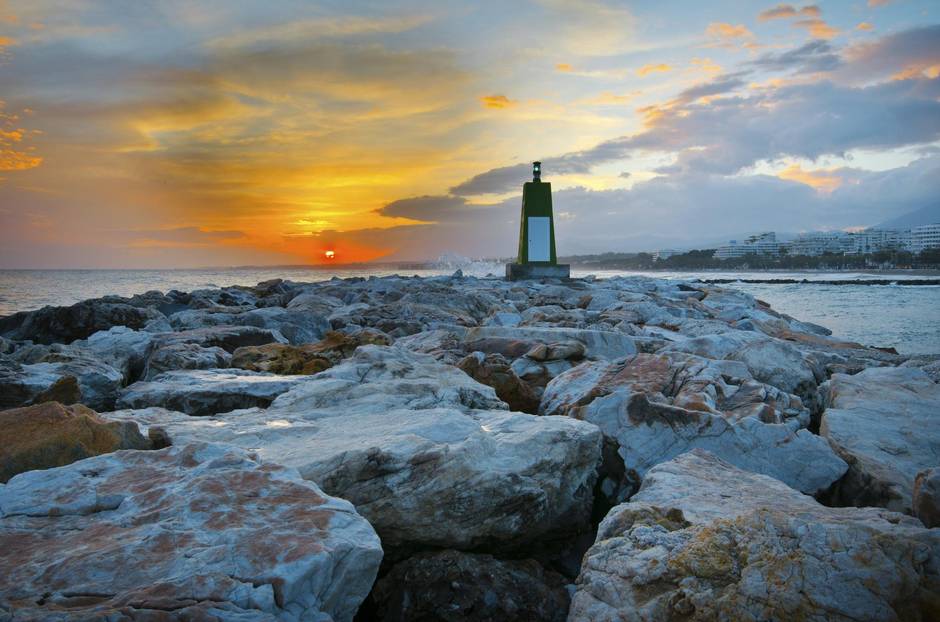 Olives, he adds, are the plant of peace, “because it’s such an effort to breed an olive, you can only do it in a time of peace.”

Despite the fact he’s about to host lunch for 50 visitors to his olive grove, Gamazo Hohenlohe seems oddly peaceful himself. He suggests we take a stroll around the grounds. “It’s a nice view,” he says, smiling, savouring the extravagant understatement. The family’s dog follows us, gamboling under the shade of a giant Cape chestnut tree and gnawing a wild-boar hoof. She’s just had 12 puppies, and deserves to eat whatever she wants as far as I’m concerned.

In the distance, Gamazo Hohenlohe points out Gibraltar. “You can see Africa, on a beautiful day,” he says. As if there were any other kind. No wonder the trees stuck around for 800 years. 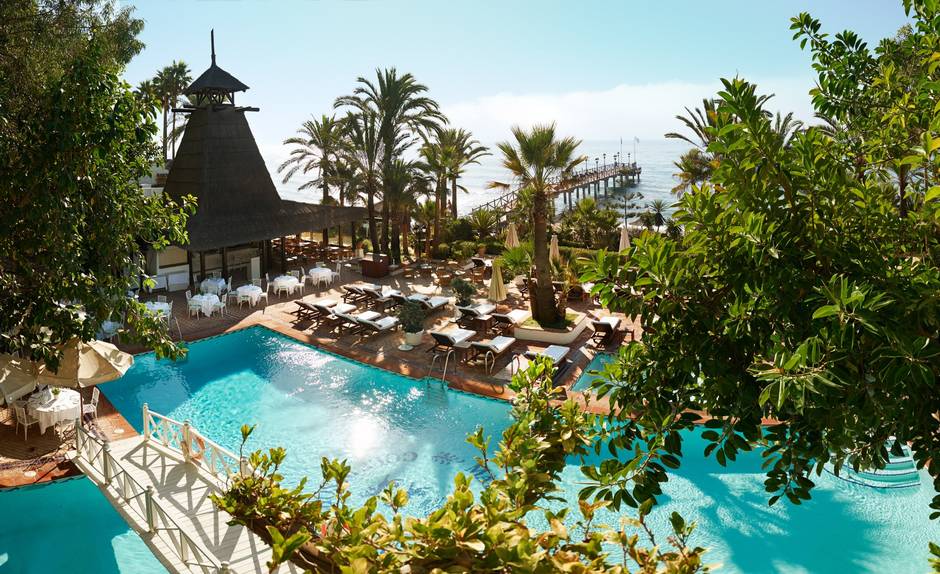 The beach club at the Marbella Club Hotel. (Handout)

Air Transat flies directly from Montreal to Malaga International Airport once a week. Other airlines fly more frequently, but require connections. The city of Marbella is less than an hour’s drive away.

Marbella Club Hotel: The whitewashed beachfront resort, fashioned after a classic Andalusian village, features 37 guest rooms and 78 suites set about a richly perfumed subtropical fantasia of fountains, palms, orange, lemon, fig and oleander trees. Should that not be luxurious enough, book one of the private villas, many with their own heated pools – and price tags deep as the Med beyond. Rooms from $1,153 (€800) in high season and $430 (€299) in low season. marbellaclub.com

Bringing your (lucky) kids? Prince Alfonso’s original villa has been transformed into the Kids Club – a veritable dreamscape for children (or, frankly, adults).

The writer was a guest of the Marbella Hotel. It did not review or approve the article.