In all the commotion, rain and darkness, no one noticed the little man in his ankle-length woollen djellaba. While we were distracted by the melee of arrival, the diminutive figure, shrouded in the mysterious traditional robe with pointed hood, loaded our bags into a wheelbarrow and fled quickly into Fez's ancient walled Medina and its maze of winding, narrow alleys.

Our taxi from Casablanca's airport had, miraculously, stopped behind another carrying our British friends, who'd travelled from the airport near Fez. So there we were: five children, four parents – and zero luggage.

No one can recall who started the chase, but the nine of us were soon madly off in all directions. We ran through dark slippery passageways – with sides so close outreached arms could touch – hairpin turns and eerie shadowed doorways.

Several months earlier, our daughter Heather, on a high-school exchange in France, announced on Skype that her host family was taking her on a holiday to Morocco. Envious (and mad because she couldn't identify the continent it was on), I invited long-time British friends Tim and Suzy and their three tween-to-teen boys on a duo-family, North African adventure. As luck would have it, a colleague of Tim's owned a house in Fez that was available for rent.

And it was Tim, as we were scrambling about, who noticed a 10th body had joined our bag-chasing parade. Youness, a smiley, doe-eyed twentysomething, was the estate manager of the house we were to stay in. He took the lead, and rushed us left and right past wet donkeys, over stepping stones protruding above the rushing water, through the smells of dinners and spices, sewers and rotting garbage and past myriad small dungeon-like fortified doors.

As suddenly as the chase had started, it finished before an old, wood-and-iron door. We had reached our destination, Youness announced.

The children stared wide-eyed at the ancient-looking entrance of Dar Alexander, the head of the doorway not much more than a metre and a half above the ground.

"This is where we're staying?" 13-year-old Bryn asked incredulously. "It looks like a barn."

A slightly older Meg gripped my hand and wailed: "Dadddddddddyyyyy – where did you bring us!?" As if on queue, the loudspeakers of a nearby minaret began the final evening call to prayer.

Apprehensively, we stepped into the 17th-century merchant's house and onto the antique tile floor. But the soft golden glow of candlelight drew us farther into the private palace. The tinkling of a fountain and the heady smell of lamb cooking in the kitchen further intrigued our bedraggled lot. Anxious faces began to melt, not because our pile of luggage was spotted nearby (a lot drier than we were), but because the place exuded such an aura of welcome.

The children soon took to the Alice in Wonderland architecture, with its endless alcoves, nooks, crannies and hiding spots. Fifty-two stairs of varying rise and run connected our little wooden door on the street to a spectacular rooftop terrace with commanding views over the Medina and hills behind.

The next morning, several of our curious kids, still clad in pyjamas, ventured out – only to discover it was garbage collection day. They reported back with a story about the pathetically sad rubbish-donkey. Felix, 9, insisted he could see tears in its eyes as it was led from door to door, an enormous wicker basket weighing down its back.

As we enjoyed breakfast, Youness convinced us that our plan to leave a trail of bread crumbs to find our way home might fail. He suggested a knowledgeable guide to lead us about for a few days of Fez discovery instead.

It was a good call. The more than 9,000 labyrinth-like alleys of the city's millennium-aged Medina are home to 160,000 of the city's one million inhabitants (not counting the donkeys). The world's largest car-free urban area can be unnavigable at the best of times. But, oh, is it ever exhilarating. The sounds and sights, smells and rhythm of this place, the oldest of Morocco's four royal cities, awaken your senses at every turn. Even our teenagers, who typically live in a state of perpetual indifference, couldn't hide their fascination.

The leather tanneries, with their hundreds of hot-tub sized clay dye-vats and half-naked men labouring in the sweltering heat, seem biblical. The industrious workers – be they experts of metal, wood, ceramic or textile – are mesmerizing, creating colourful artwork using methods that have changed little over hundreds of years.

Children not brave enough to wander off at home stretched parents' arms in different directions to see what was being hawked at one stall or another. The goods on offer are endless: fake Ray-Bans, live snails, intricately carved wooden strong boxes (impossible to open without knowing a mathematical series of complicated moves), unfamiliar spices that tempted nostrils, more familiar tasty figs, dates and clementines and, much to the kids' disgust, camel meat.

Fez is the country's spiritual and cultural centre. It was founded in 859 by Moulay Idriss II, who is believed to be a great-great grandson of the prophet Mohammed. Today, about a third of its population is Berber, the indigenous people of North Africa. Slightly more than half are of Arab descent, relative newcomers since they didn't arrive until the 7th century. Influences of French colonization are everywhere, although younger Moroccans are more likely to speak English as a second language over French.

At times, we felt as if we were the only foreign faces in town; with five giddy children, our entourage didn't go unnoticed. But our reception in Fez – and the rest of the country, for that matter – was always polite, quiet and friendly. Only in some parts of Marrakesh, at the end of our 10-day journey, did we see the occasional abrupt interaction between visitor and seller. Perhaps not surprising since for every tourist we saw in Fez, there seemed to be 10 or 20 in the relatively bustling city.

After a few days of playing lost and found, we set off for a seven-day tour beyond the cloistered walls of the Medina.

Our adventures post-Fez were filled with drastically contrasting geography, from snow in the Atlas Mountains to crumbling, rammed-earth casbahs in the desert. Within just a few hours' drive of Fez lie alpine towns, such as Ifrane, which seem more suited to the Alps than Africa with their ski hills and chairlifts. Near the Algerian border, massive golden dunes of sand captivate the imagination. A caravan of genuine, camel-trading nomads grabbed the attention of the older set, but it was Morocco's version of Hollywood, near the high-desert city of Ouarzazate, that most entertained the kids. There, they played among old movie sets in the back lots of Atlas Studios, where scenes of The Mummy and Gladiator were shot.

In the end, we managed to return home with the same number of children (and amount of luggage) we started with – plus memories of a family trip that stands out more than any other.

Royal Air Moroc flies several times a week between Montreal and Casablanca, but Air France has lower fares and more frequent flights between several Canadian and Moroccan cities. (Plus a stopover in Paris is allowed.)

The restored Dar Alexander, a traditional, grand Moroccan home in the heart of the Medina of Fes el-Bali (Old Fes), easily accommodates two families in five bedrooms. From $473 (€350) a night; includes breakfast and dinner on the first night. daralexander.com

Jaws drop at the Djemaa el Fna market in Marakech as you take in pushy men with monkeys, snake charmers, denture makers, acrobats and everything in between. It'll all be on your kids' Facebook page before you get home.

Bivouac overnight in the giant sandbox of the Merzouga desert near Algeria. A trip highlight, especially for the kids, included being dragged out of woollen Berber tents early one morning for a camel ride to the highest dune to catch the sunrise. xaluca.com

Morocco's impressive and snowy Atlas Mountains (half a dozen peaks reach higher than 4,000 metres) offer an alpine world to be discovered. Dar Imlil is a wonderful mountain hotel with hiking trails that lead to the snowline practically from your bedroom door. darimlil.com 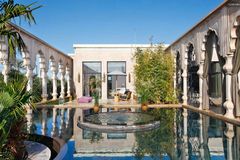 Ready for a stay in a chic shipping container? What about a wine barrel?
February 1, 2013 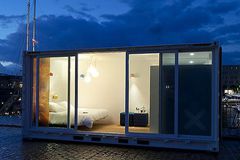 Don't get the rug pulled over your eyes in Morocco
December 17, 2010
Follow us on Twitter @globeandmail Opens in a new window
Report an error Editorial code of conduct
Due to technical reasons, we have temporarily removed commenting from our articles. We hope to have this fixed soon. Thank you for your patience. If you are looking to give feedback on our new site, please send it along to feedback@globeandmail.com. If you want to write a letter to the editor, please forward to letters@globeandmail.com.
Comments