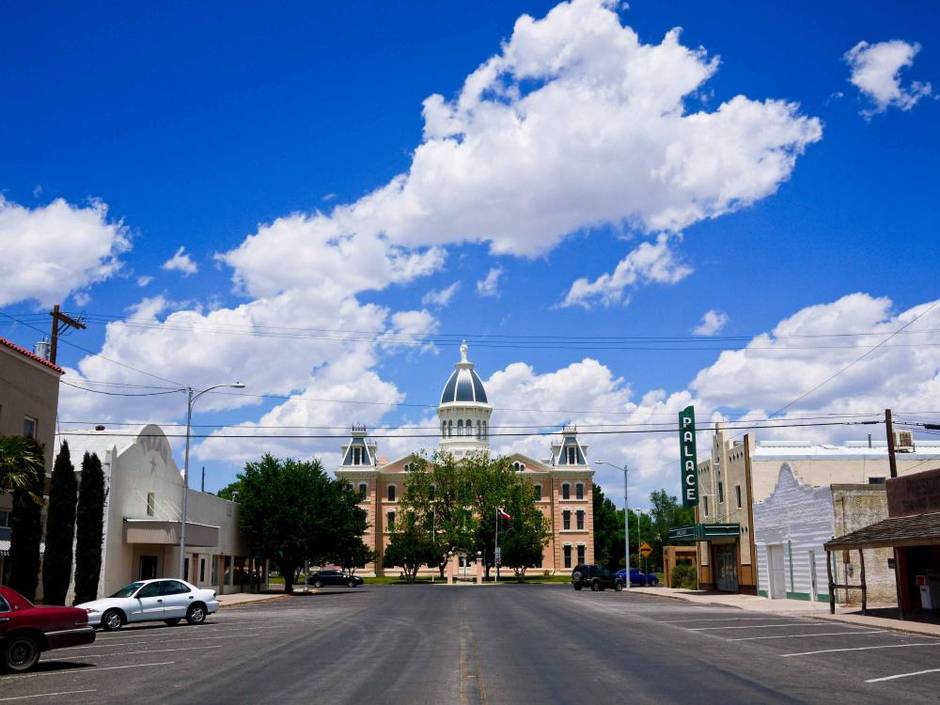 Marfa, Tex., is a town of just 2,000 but it has a large reputation among minimal artists. (Wikipedia)

During the 650-kilometre drive from San Antonio to Marfa, Tex., the question did occur to Barbara Astman.

Admittedly Ms. Astman, a celebrated Toronto artist and professor at OCAD University, was drawn to this city of about 2,000 people in West Texas at the crossroads of, well, whatever. Artists and art lovers from around the world are attracted to Marfa, but she wasn’t quite sure what to expect.

She wasn’t disappointed though. “Even the drive down is quite the experience. The light changes, the clouds change, the landscape changes. It feels like it’s in the middle of nowhere, but when we got there the whole town was actually booked,” she says.

The point of going to Marfa, she explains, is that there’s nothing there – nothing conventional anyway. But there’s sunshine, endless vistas, an eerie light show and a vivid art scene with a bohemian tinge.

Oh, and a Prada store on a bleak stretch of highway, stocked with uber-expensive shoes and purses. It’s a mirage store, though – an art installation. People slam on the brakes, stare, scratch their heads and take pictures – all the measures of a good piece of conceptual art. 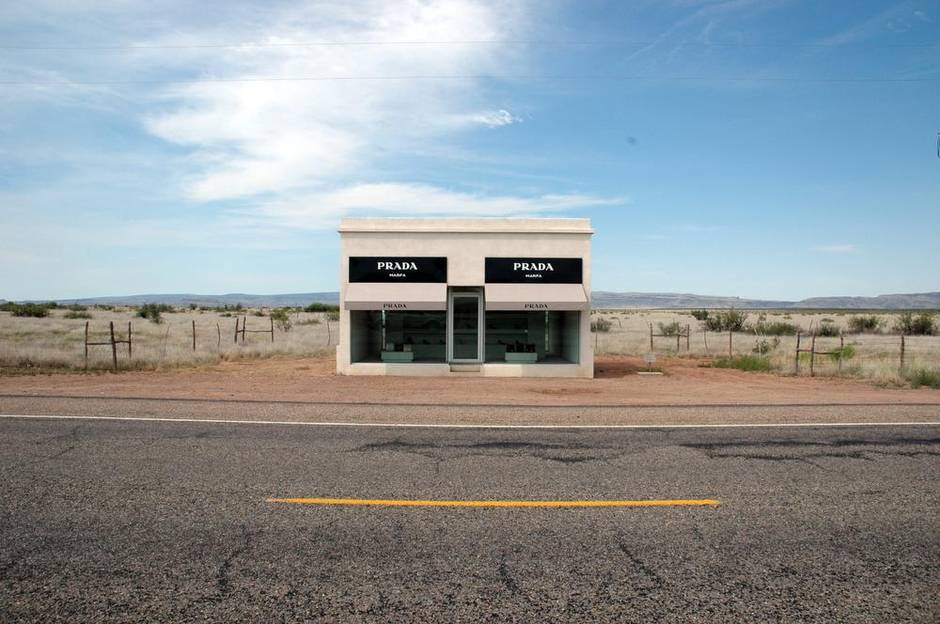 If a Prada store seems out of place in Marfa, Tex, well, it is. The store is actually an art installation. (Wikipedia)

“It’s just a unique little community,” says Ellen Melvin, assistant director of the Marfa Visitor Center. Once a railway water stop and then a Second World War pilot training centre, the city reinvented itself as a magnet for minimalist art.

It promotes itself as: “Tough to get to. Tougher to explain. But once you get there, you’ll get it.”

It’s actually not that hard to explain how this place, which looks like Wile E. Coyote’s hometown, became a hipster destination.

Until the 1970s, its biggest cultural claim was that its Hotel Paisano was the location for James Dean’s last movie Giant, which also starred Rock Hudson, Elizabeth Taylor and Dennis Hopper. 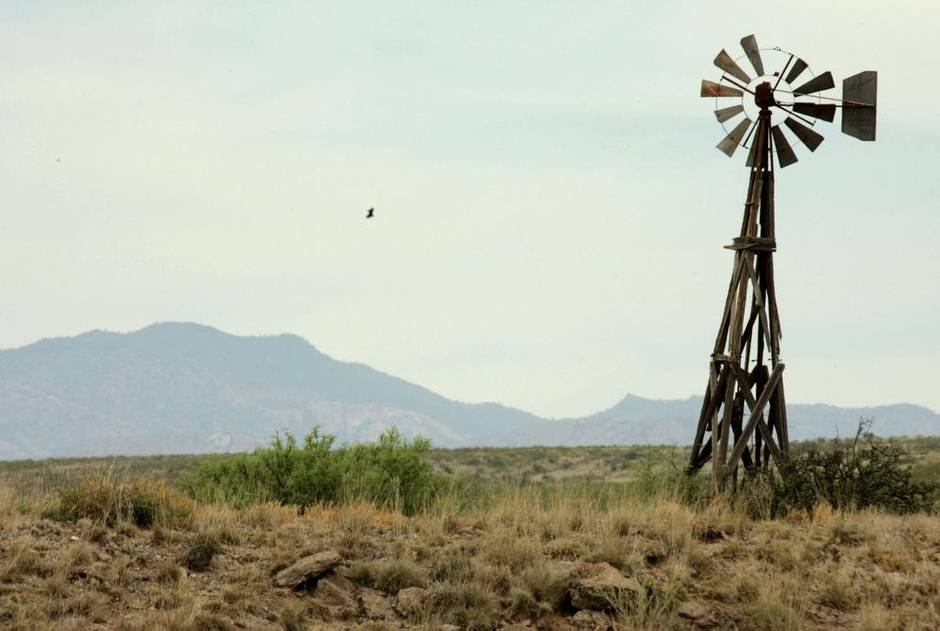 An old windmill used in filming of the movie Giant still stands on a ranch near Marfa, Tex. Fifty years ago, this West Texas town became the setting for the Hollywood classic about a wealthy Texas cattle-raising family. (Donna McWilliam/The Associated Press)

Marfa was, and is still, also known for its mystery or ghost lights, strange orb-like apparitions that can be seen from a viewing area 15 kilometres to the east of the town. The round objects hover in the night sky and move horizontally – a bit like car headlights from a distant celestial highway.

They’re not from cars; apparently the lights are some sort of night mirage, caused by sharp temperature gradients in the mountains.

In 1971 Donald Judd, a famous minimalist artist from New York, decided to move to Marfa, looking for a place that could properly showcase his massive, striking, austere work. Mr. Judd, who died in 1994, taught at Yale, Dartmouth and Oberlin College in Ohio among other institutions, and had numerous exhibitions, including a solo show at the National Gallery of Canada in Ottawa in 1975.

Mr. Judd rented a house and eventually bought a 243-square-kilometre ranch – this is Texas, after all. Then he purchased a smaller 1.4-square-kilometre desert tract that included abandoned U.S. military buildings; by 1986 this became the Chinati Foundation, a not-for-profit centre dedicated to the work of Mr. Judd and his contemporaries. Its collection includes his large-scale works and 100 of his aluminum pieces, as well as sculptures and installations by other contemporary artists.

“I didn’t know it was going to be as spiritual as it turned out to be,” says Ms. Astman, whose own work includes installations at the University of Toronto and in the Canadian embassy in Berlin.

“The pieces are massive. The foundation is set in a huge, low building, with one wall looking out into the desert. It’s an extraordinary landscape in a light that I had never experienced before.”

Ms. Astman said that she and her husband considered staying at the iconic Hotel Paisano, but it was fully booked – a high-flier from New York brought his friends down to celebrate his birthday.

“We ended up staying in an Airstream [aerodynamic metal trailer] with a bathtub on the front porch,” she says.

The trailer park, called El Cosmico, describes itself as “an 18-acre [7.2-hectare] nomadic hotel and campground … in keeping with the belief that life should be a balance of adventure and do-nothingness.”

In addition to Mr. Judd’s and others’ work at the Chinati Foundation, there are numerous smaller galleries in Marfa, as well as Ballroom Marfa, another not-for-profit space that runs edgy theatre, performances and films. Restaurants range from burrito bars and the Grilled Cheese Parlour to more upscale establishments with decent wine lists.

Typical winter weather is about 15 C, though there can be wild variations between daytime and nighttime temperatures. You don’t have to be an artist to appreciate Marfa, says Ms. Astman – but it you are an artist you certainly will appreciate it.

“It’s a highly special trip that I had been wanting to do for a very long time.”