Brady Starr is 2,490 metres above sea level, ready to scorch down a mountain ridge on his bike. Andy Brown is 10 metres above him, on the summit, gearing up to ski a strip of snow not far from Starr’s path. Peter MacLaren is paragliding above them both. A hang glider noodles around nearby.

We are on Mount 7 – Golden’s one-stop-adventure rock. The trio is pulling off Mount 7’s rare summer trifecta: biking, skiing and flying, all at once. Starr and Brown add a dose of 4x4ing up a logging road and hiking with equipment on their backs to execute the skiing and biking segments; to paraglide, MacLaren runs off Mount 7 at 1,950 metres above sea level and rides the wind upward. I knock off two of the three – paragliding and skiing – in one day, displaying varying degrees of skill and grace. I lose a thimble or two of blood, leave skin on craggy rocks and, yes, need help from the guys when this interdisciplinary playground in British Columbia bests me.

Starr’s bike is green, his helmet black and his mind clear. He rips down Mount 7’s scree field – a grey blanket of loose, sharp rocks, punctuated by outcroppings – for about 500 metres, dropping 190 vertical metres. The angle of the slope is about 35 degrees.

“It is sometimes moderately intimidating when you are looking down the ridge. It is quite steep. And then once you get going, it is just all bliss,” he says, as if the 25-second ride is a reasonable thing to do on a Friday afternoon. “It is some of the most pure and raw downhill-mountain biking in the province.”

Indeed, you don’t go to Golden because you love Banff. You go to Golden because you love the mountains and know you don’t need to buy a jade grizzly bear carving after hiking. Banff is like Katy Perry – choreographed, fluorescent, sugary. Golden is the Mudhoney of the mountains – unpredictable, gritty, punk. You know about Katy Perry. As for Mudhoney, if you know, you know.

Mount 7 is named after the fleeting fashion statement it makes each summer, when it sheds all its snow save for one ribbon shaped like a seven. The window of opportunity to ski the Seven is brief – it lasts only about seven to 10 days each year. Ideally, locals ski it July 7th. (Get it?) Clothing is optional. I am here, clothed, on June 5th because last winter’s snow pack was thin and this spring was hot. I came to Golden to ski the Seven; I involuntarily skidded down a good chunk of it on my back.

But first, I paraglide. 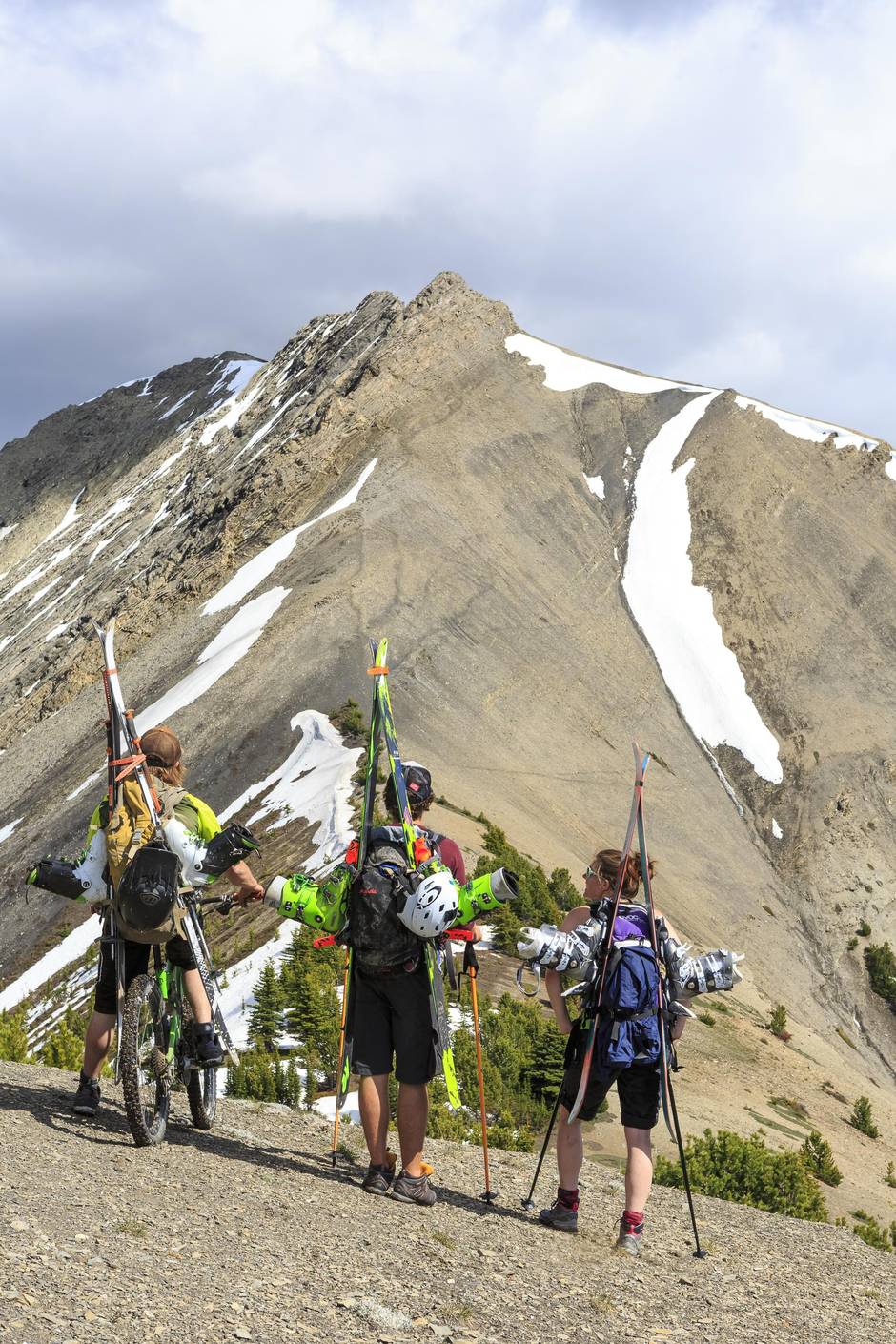 In the summer, it’s easy to see how Mount 7 got its name. (Photos by Dave Best for The Globe and Mail)

Peter MacLaren operates Parapete Tandems. He floats about 100 hours in the sky each summer above mountain tops. He is afraid of swing sets. Those are just too much for him.

Paragliders and hang gliders access the launch pad thanks to a 14-kilometre logging road. Gliders have set speed and distance records off this grassy pad. The mountain’s thermals (think updrafts) keep adventurers in the air for hours. In 1986, a fellow named Randy Haney hang-glided from here to Whitefish, Mont., 325 kilometres away.

MacLaren and I plan to go four kilometres in 15 minutes.

“Our sink rate will be somewhere around one metre per second,” he says.

I wear a blue helmet, he wears a white one. We get in our rigs – they are like chairs without legs – and MacLaren clips us together. We want to land on a patch of grass on the other side of the Columbia Valley.

I ask myself one question as we prepare to run off Mount 7: Why didn’t I just hike or canoe around the Columbia wetlands rather than fly with its fauna and swoop over its flora?

It is too late to reconsider my definition of a good time. I’m attached to a man I just met and running toward the drop-off. I scream when I realize I’m still wheeling but my feet can’t touch the ground.

The screams morph into happy squeals a few seconds later. From here, the wetlands look like slimy green puddles best avoided when coming in for a landing.

Our giant white nylon banana carries us gently over the spruce trees below. From here, they look like green swords that will bludgeon us if this goes wrong. We are going 30-35 kilometres an hour, but it feels like floating in a lazy breeze. We corkscrew downward, on purpose, for the rush, before landing on the grass.

I’m sitting on the valley floor, yet the day goes downhill from here. 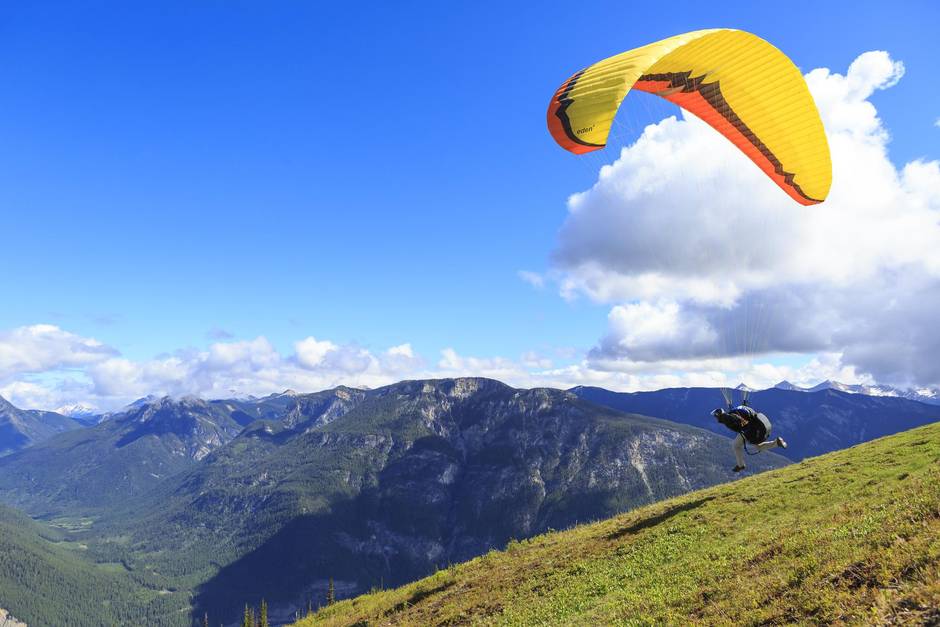 A paraglider launches from the grassy pad on Mount 7. Thermal updrafts in the area can keep a paraglider in the air for hours.

Starr, Brown, and I 4x4 up Mount 7 until snow thwarts us on the logging road. We hike about two kilometres before getting to the base of Mount 7’s scree field, navigating the bush, patches of snow, and outcroppings where missteps are punished. Starr, backpacking his skis and boots while pushing and carrying his bike, beats me up this Rocky Mountain.

I’m five metres from the top of Mount 7 and need to scramble onto a ledge above. I hold on to the rocks above me and move from toehold to toehold.

I slip on a patch of ice. I can’t get a footing. I’m not strong enough to pull myself up. Rocks embed themselves in my knees. I’m slowly losing my grip, like a cartoon villain about to meet her deserved fate.

Starr ditches his bike and hustles to me. “Let go,” he says. I can’t see him. Brown, standing above me, says Starr is right below. He will catch me. Just let go.

My fingers slip before I decide whether letting go is wise.

I freefall at least three centimetres before Starr catches me. 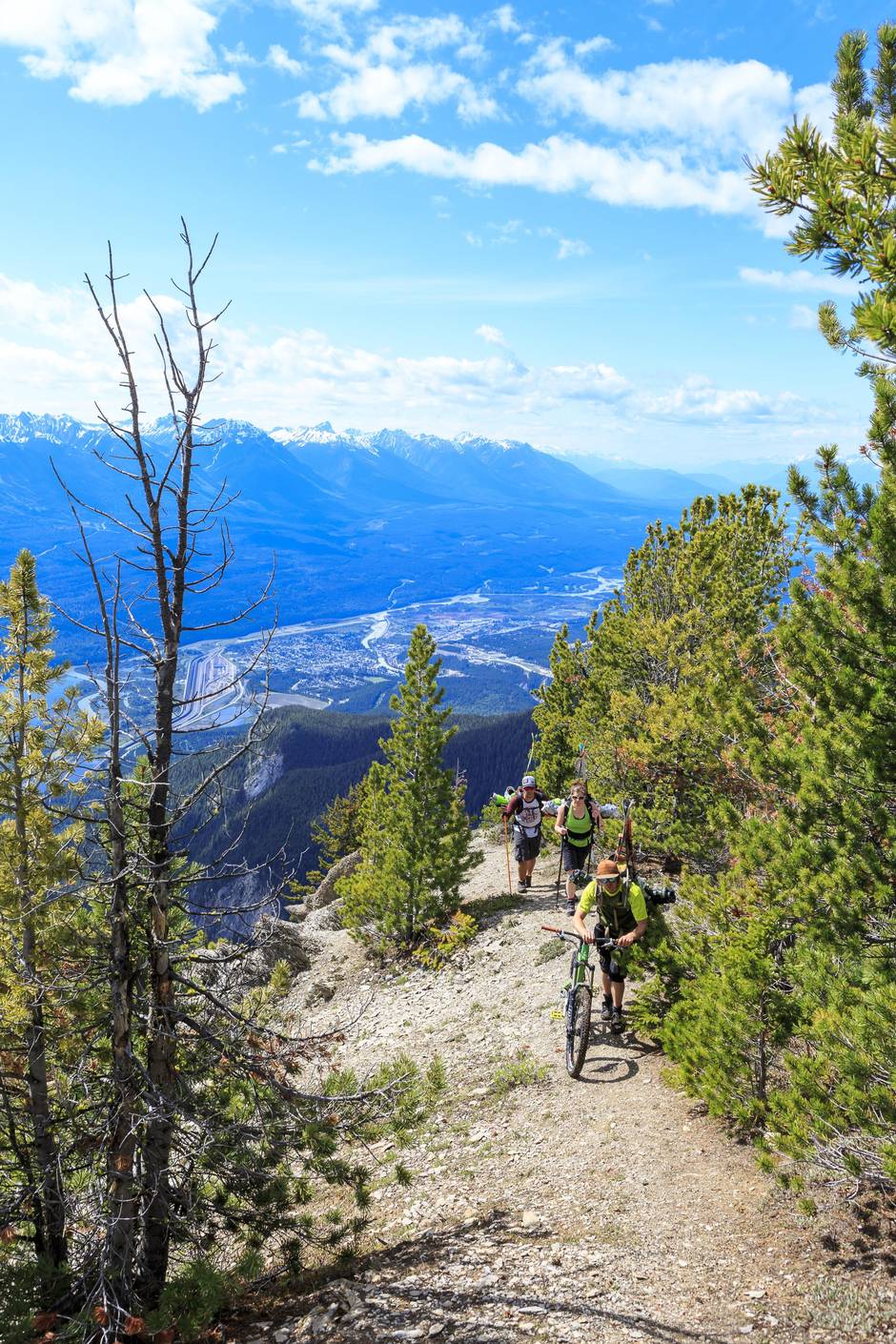 Mountain adventurers have a slow climb up Mount 7.

Brown, a spokesman for Tourism Golden, and I are standing on the Seven. He makes about 25 casual turns down the Seven, covering about 120 metres.

The Seven’s snow is soft and heavy from the heat. My skis sink. I wipe out. A river of slush and scree carries me downhill on my back. I scream for help. The Seven rests in the mountain’s drainage, and the drainage continues long past the end of the Seven. I think of all the ledges I could skid off. Still moving.

I finally dig my skis in hard enough to stop sliding after about 30 metres. I check for rogue bones sticking out of my body, dig out of the slush, and plan my next move.

The Seven isn’t steep and it is 20 metres wide, enough room for swoopy turns. But I stand there feeling stranded. Brown hikes up to me, gently telling me to hurry up already. He counts me in. Ten, nine, eight – if I wait any longer, I’ll chicken out. I ski.

Screams turn to giggles. I manage a handful of turns before the heavy snow threatens to throw me down again. I stop, clack my poles together above my head, and get off the Seven even though I’m not at the bottom. Close enough.

“Anywhere I go around the world, it is hard to think of a cooler ski line,” Jim Gudjonson, believed to be the first person to ski the Seven about 30 years ago and who has travelled the globe as a mountain guide, says.

“You can’t actually see the bottom of the Seven when you’re standing on the top. It just rolls off. You’re not sure what the end is going to be like.”

Fly into Calgary International Airport. Golden is about 280 kilometres west on Highway 1, the Trans-Canada Highway.

Plenty of summer activities are free in Golden, including hiking, biking, climbing and fishing. For a fee, you can also golf, go horseback riding or skydive.

Glacier Raft Company: All-day adventure, including riverside BBQ lunch $165 per person. More packages with other activities such as horseback riding, camping, and ATVing are available. glacierraft.com

Mount 7 hiking, biking, and skiing: Free, but go with someone familiar with the activities or ask locals plenty of questions.

Prestige Inn: Mid-range hotel with a pool, hot tub, fitness room, and walking distance to downtown Golden. Rooms range from $169.95 to $219.95 (plus taxes) in the summer. prestigehotelsandresorts.com

Mount 7 Lodges: High-end chalets at the base of Mount 7 with unobstructed views and private hot tubs. The lodges are a five-minute drive to downtown. From $200 a night (plus taxes). mount7lodges.com

Canyon Ridge Lodge: A modern mountain-style bed and breakfast. All of the rooms have private ensuite bathrooms. It is a five-minute drive to downtown. From $109 (plus taxes) for one or two guests in summer. canyonridgelodge.com

The Prestige Inn charged a media rate; Starr Trail Solutions Inc. and Tourism Golden provided transportation on Mount 7. The companies did not review or approve this article.