Is the slogan plastered on the Munich cigarette machine - "SO NOT BERLIN" - bragging or complaining? If Berlin is all about art and sex, Munich is more focused on design and fashion. Nowhere is this truer than in Glockenbachviertel, a warren of twisty streets, unique boutiques, pastel-washed neo-classical façades, oddly cozy gay fetish bars and a hundred tiny cafés and louche lounges - all just a quick polka away from heavily touristed Munich Central.

According to Kristian at the Queer Communications and Culture Centre, "Glockenbachviertel was a gay and lesbian neighbourhood even in the 1930s, under the Nazis," at least until homosexual men were transported to concentration camps. Throughout the decades, artists and alternative types flocked to the area for the free-and-easy atmosphere and low rents.

More recently, the quarter has become hetero-trendy, a hipster party place and a fancy address for people who want to buy, not rent. An ugly sixties high-rise rental building is now being transformed into a swank condo project where flats go for millions of euros apiece.

For many gays and lesbians, Kristian adds, "this is heimat [home] They don't want to lose it." He hopes that queer political power - there's now a gay municipal party called Rose Liste (Pink List) - will help Glockenbachviertal maintain its historical and cultural distinctiveness as the area grows ever more popular. Local politics and sexual persuasions aside, the neighbourhood has an unforgettable energy and vibe.

This non-profit 51-seat basement movie theatre is about as old Glockenbachviertel as you can get, dedicated to obscure, experimental, obscene, horrific and hilarious films. Where else can you see The Sinful Dwarf or Dracula in Pakistan?

Located in one of the posh streets radiating off Gärtnerplatz circle, the Ruby Store offers offbeat and upmarket fashion for women (check the grey cropped kid jacket with a collar as big and floppy as an elephant's ear) and men (battered cotton form-fitting trench coats for that spy-in-the-house-of-love look).

From the outside, Lizard Lounge looks like an abandoned jewellery store. Inside, it's crammed with Munich's bright young things - media types, artists, actors - and its fair share of lounge lizards, all perched on uncomfortable red leather cubes. But the DJ takes no prisoners with eclectic mood-wrenching sets.

On a small island in the Isar River that borders Glockenbachviertel, Deutsches Museum is massive (55,000 square metres), interactive and totally awesome. There's a working model of a coal mine in the basement and full-scale schooners sail one enormous exhibition hall. The gift shop's pretty cool too - tiny perfect models of all kinds of technological stuff.

This restaurant (known in English as German Oak) has been around since 1862 and has attracted travelling bohemians from day one. This plain-style eatery, offering generous portions of traditional Bavarian dishes, was so popular with legendary German filmmaker Rainer Werner Fassbinder ( Berlin Alexanderplatz) that he called it his Wohnzimmer (living room). Queen's Freddie Mercury hung out here too.

Not a boutique to take your PETA friends to, Sax-S specializes in one-of-a-kind women's bags made of fur, leather, lizard and snakeskin. The owner, former Paralympic medalist Petra Sax-Scharl, designs, cuts and sews the bags herself at a long work table in the centre of the shop. Prices range from moderate (for a clutch) to several thousand euros for a long gourd-like shoulder bag.

Nothing matches in the decor mash-up that is Frenzy resto-bar-café - disco balls sparkle over the bar, a chorus line of Buddhas decorate a high shelf, sixties-style bar stools have that space-age thrust, empire chairs sport pink velour upholstery and a big silver rabbit presides over all. Named for Alfred Hitchcock's penultimate film about how eating and killing are closely related appetites, Frenzy offers an animal-sympathy menu, serving only meat that has been "humanely" slaughtered. The Leberkaas (meat loaf) is rich and tasty, and for diners for whom even a humane killing is not enough, the gnocchi vegetariana features delicious homemade pesto sauce.

Technically, Müller'sches Volksbad (public bathhouse) isn't in Glockenbachviertel - its just across the Isar - but don't let that keep you from visiting this century-old building, with its Gothic exterior and art nouveau interior. It features two heated pools, where you can swim for less than $5, and a gorgeous high-domed Irish Celtic steam bath. 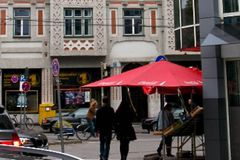 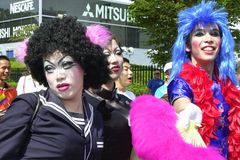