Seen from the glass-walled observation post atop Mount Inasa, Nagasaki sprawls to the north and south, tucked into the folds of hills rising from both sides of a narrow, U-shaped harbour. Located on the northwest coast of Kyushu Island, it is one of Japan's most picturesque urban settings - one that is remarkably unmarked by obvious reminders of its destructionin 1945.

When the 65th anniversary of the atomic bombing of Japan was remembered this past August, Hiroshima, the first city to be hit by a nuclear weapon, received most of the media attention. Nagasaki, devastated three days later by a huge plutonium bomb nicknamed Fat Man, was mentioned mostly in passing. In one of the Second World War's darker ironies, the West's most terrible technology was used against a place that was for centuries Japan's main entrepôt for importing Western inventions, culture and even Christianity.

Since the 16th century, successive waves of Chinese, Portuguese, Dutch and British traders left their mark here with European-style houses, Catholic churches and a Ming-style Chinese temple said to be in better condition than most Ming-era temples in China. Its long tradition of contact with foreigners has left Nagasaki with a cosmopolitan atmosphere unusual in Japan and an easygoing manner that puts Western visitors at ease. While most come to see the Atomic Bomb Museum and related sites, there are enough other attractions in this easily navigated city of a half million to fill two or three days.

Here are some highlights.

VIEW FROM THE TOP

Nagasaki remains first and foremost a port city and a good way to get an overview of the city's geographic relationship with its harbour is to take a cable car to the peak of 333-metre Mount Inasa on the Nagasaki Ropeway. In the evening, you can dine in the Hikari restaurant on the outlook's second level and enjoy the city's twinkling lights.

The city was once Japan's only window to the outside world. After Portuguese traders and priests were expelled from the country by the Tokugawa shogunate following the Christian-led peasant rebellion in 1637, Dejima, an artificial island in the harbour, was occupied by the Dutch. For the next 200 years, their tiny enclave and a small community of Chinese traders was Japan's trade port with the rest of the world. Today, the island is part of the mainland and a dozen structures, including warehouses, residences and common rooms have been recreated. Visit the Museum of History and Culture, which holds thousands of exhibits detailing the city's development during the period of national isolation.

On a hill overlooking central Nagasaki, Glover Garden is a collection of nine Western houses set on landscaped grounds. Many were built between 1868 and 1912 during the Meiji era, when Japan opened itself to the world and the city became one of the country's most progressive communities. The most interesting building is the mansion built by Thomas Glover, a Scotsman who traded in guns and ships and helped the city achieve a series of Japanese firsts. Glover Mansion is romanticized as the home of Madam Butterfly, the tragic heroine of Puccini's famous opera.

Early Chinese traders who came to Nagasaki were confined to a ghetto but had fewer restrictions on their movements than their European counterparts. They left behind shrines and temples, the most famous of which is the impressive Sofukuji, founded by Chinese residents in 1629. Located at 7-8 Kayjiya-machi; open 8-5 p.m.; admission $3.60 (300 yen) for adults, $1.25 (100 yen) for children; 095-823-2645.

More than 70,000 people died instantly from the blast on Aug. 9, 1945. Another 70,000 would perish from burns and radiation poisoning. The three main memorials are sombre and moving. A large peace park holds a collection of commemorative plaques and statues sent from various countries. Elsewhere, a black obelisk marks the "hypocentre," the spot above which the bomb was detonated. The obelisk stands on a black-marble box that contains a book with the names of all those who died in the blast. Nearby, the Atomic Bomb Museum exhibits gruesome photos and relics of the horror, along with a life-size model of Fat Man.

The Peace Park is at the Matsuya-machi streetcar stop; free admission. 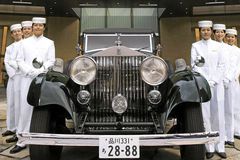 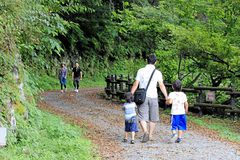