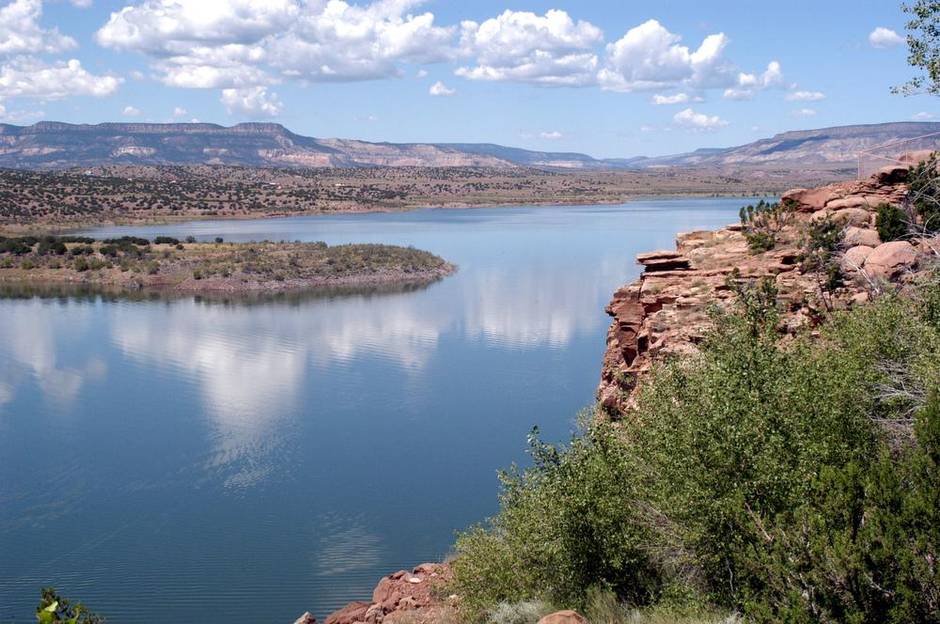 There’s something irresistible about the light in New Mexico.

It was the dazzling light of a sunrise pouring across the mountains that first convinced Craig Varjabedian to move to Sante Fe, N.M., in the late 1970s. The Windsor, Ont.-born photographer had been inspired to visit the city after taking a workshop with famed U.S. photographer Ansel Adams, but he didn’t have enough money for a hotel room, so he found himself sleeping in his car on the Santa Fe Plaza in the city centre.

“I remember waking up, and seeing light that was almost palpable,” he says. “In other words, I felt like I could almost take a Mason jar and capture it. I’d never seen light like that anywhere before.”

Varjabedian was hooked. Now, he’s one of a growing number of New Mexico photographers who are helping visitors capture that fabled light through scenic photography tours. With its rose-coloured deserts, adobe architecture, snowy mountain peaks, vibrant wildlife and impressive legacy of Southwestern art, New Mexico has become a destination for photography hobbyists and serious amateurs looking to expand their skills and snap some breathtaking scenery.

For 25 years, Varjabedian has been running workshops and tours in New Mexico for photography buffs of all skill levels through his company, the aptly named Eloquent Light Photography Workshops. “One of the reasons our light is so beautiful is that the air is the cleanest in the United States, maybe even North America, because we have no manufacturing here,” he says. ”But it really almost defies explanation.”

Varjabedian offers two types of experiences: traditional workshops where clients spend half their time shooting and half their time in the classroom, and adventure tours where most of the time is spent in the field. One such trip takes visitors to the White Sands National Monument, the largest gypsum dune field in the world. 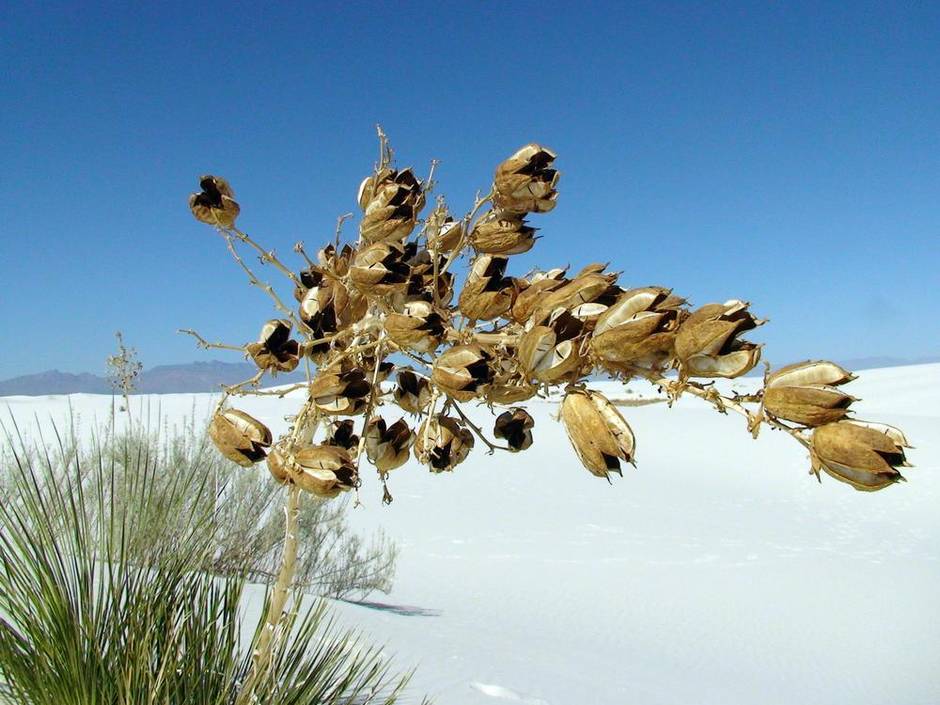 At White Sands National Monument, the world’s largest gypsum dune field, sand is so white it can look like snowdrifts. (New Mexico Tourism)

“You see great big white dunes that look like you’re driving in snow,” he says. “Your mind gets tricked because everything you see is white.”

Meanwhile, Taos, N.M.-based photographer Geraint Smith has been leading what he calls “photo-safaris” across New Mexico for eight years, focusing on the Taos area and the expressive, haunting landscape around Abiquiu that seminal U.S. painter Georgia O’Keeffe depicted in her work. The tours range from half-day jaunts to three-day excursions that end with time in the studio to review clients’ photos.

“During the photo-safaris, we’ll be driving, we’ll be stopping, we’ll be looking for things en route,” says Smith. “If it’s just a half-day trip, we can spend an afternoon down at the Mission Church [in Ranchos de Taos], which is very popular, and play with the cameras and see what we can come up with, imagery-wise.”

One of Smith’s excursions focuses on the Rio Grande del Norte National Monument, with its steep volcanic cliffs, winding rivers and abundant wildlife. When participants head into the gorge to take photos, it can be a meditative experience, Smith says.

“You go down in and start to work with your feelings and what the light is suggesting to you,” he says. “The air on your face, the warmth of the sun, you look for the imagery that presents itself. Sometimes it may be a blue heron, it may be a bald eagle, it may be a little plant alongside the river.”

Then it’s up out of the gorge to take in expansive views of the mountains, with red rocks reaching up to the clouds and landscapes that go on as far as the eye can see. And, there’s that gorgeous light.

“We get a late-afternoon light that you don’t get too many other places,” says Smith. “The sun sets, it creeps out from a cloud and right before it goes down over the horizon, it sort of slices across the desert landscape and creeps up the mountains and lastly illuminating the clouds above and you get these vast, extraordinary sunsets that seem to go on forever.”

For photography enthusiasts who want a more extended immersion in their hobby, National Geographic Expeditions offers a five-day photographic workshop in New Mexico for amateurs interested in improving their digital photography skills in a beautiful setting. (Participants are required to bring a digital SLR camera, a laptop and software for organizing and presenting images.)

Tour stops include Santa Fe, where tan adobe buildings contrast against the striking turquoise sky; Abiquiu, with its richly coloured sandstone mesas and buttes; and a re-created Old West town, complete with saloon and sheriff’s office. Instructors send participants on assignments, then host edit-and-critique sessions in a classroom setting. 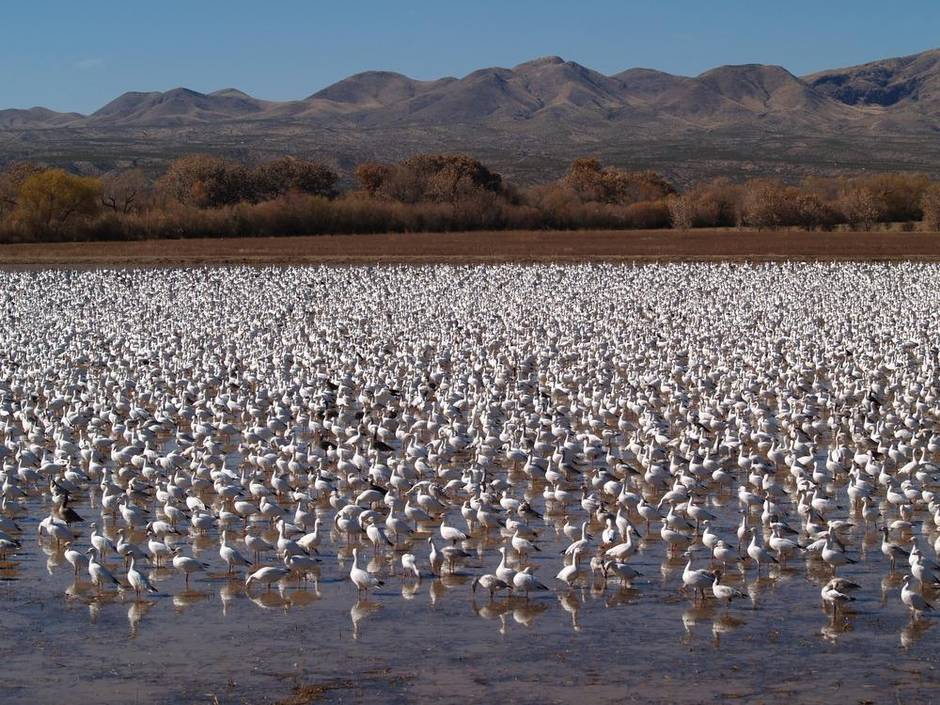 Reid Callanan is the director of Sante Fe Photographic Workshops (a company contracted by National Geographic to run its workshops in New Mexico). He says their tour often attracts boomers who are looking to devote time to something they feel passionate about.

“We hear this story over and over again from the people who take our workshops – the last 30 years I spent taking care of the family, raising the kids, getting them to college, building a business, now it’s ‘me’ time,” says Callanan. “I want to do something that fulfills me in a creative, inspirational way.”

For amateur shutterbugs hoping to commune with the majesty of the animal kingdom, a trip to Bosque del Apache National Wildlife Refuge is not be missed, says Australian wildlife photographer and expedition leader Inger Vandyke. Each fall, hundreds of thousands of geese, cranes and ducks migrate to the area to spend the winter, feeding and replenishing their body fat in preparation for the long flight home in the spring.

“In the morning you get what they call blast-offs, a massive blast of thousands of birds taking off,” says Vandyke. “And then in the afternoon, they come back from the feeding grounds to roost, so you get these wonderful photographs of silhouetted birds.”

Vandyke has led expeditions in places such as Namibia, Tibet, India and Antarctica, but she says that Bosque del Apache is easily one of the most incredible locales she’s photographed. “There’s nothing like standing in front of a field of hundreds of thousands of snow geese taking off,” she says.

“I’ve never seen anything quite like it anywhere, and I’ve seen quite a lot.”

New Mexico’s clean air and soft light create stunning sunsets for visiting photography enthusiasts. (New Mexico Tourism)
Follow us on Twitter @tgamtravel Opens in a new window
Report an error Editorial code of conduct
Due to technical reasons, we have temporarily removed commenting from our articles. We hope to have this fixed soon. Thank you for your patience. If you are looking to give feedback on our new site, please send it along to feedback@globeandmail.com. If you want to write a letter to the editor, please forward to letters@globeandmail.com.
Comments