It's a Friday evening, and I've just finished an interview for a story in San Francisco. I'm driving to Oakland, the Bay Area's long-time second city and now, perhaps, with San Jose's digital-era ascension, its third city. The Bay Bridge I cross is grey, relatively squat and just gets the transporting job done – it leaves the preening for photographs to its orange, show-off sibling, the Golden Gate. To my left is a replacement bridge going up courtesy of Obama's stimulus funds; to the right are Oakland's cranes, which offload a decent portion of America's imports from Asia.

This utilitarian bridge and these hard-working cranes have become civic symbols for no-airs-and-graces Oakland, their images printed on popular T-shirts. The old industrial city that lies on the flatlands and hills beyond is having a moment, albeit a best-and-worst-of-times sort of moment.

Early this year, The New York Times shocked many Oaklanders by declaring their city the fifth best place on the planet to visit (after London, ahead of Tokyo. Canada didn't even place). "New restaurants and bars beckon amid the grit," the article touted. And a recent San Francisco Weekly cover blared, "Is Oakland cooler than San Francisco?" – the answer, arguably, contained in its need to ask the question.

Part of a gentrifying trend, my partner and I, both from the Toronto area, recently moved into a small 100-year-old bungalow in Temescal, an area about a mile east of the downtown. As we settled in, a Times photo essay celebrated our adopted 'hood as, essentially, the West Coast's answer to hip and creative Brooklyn.

Certainly, Temescal has the obligatory stores for knitters and board-game enthusiasts and lovers of artisanal cheese. You'll find a sorbet and an ice-cream parlor (both organic) and, in nearby Rockridge, two apparently thriving independent bookstores. A local baby need never wear mass-produced clothing.

California's enviable agricultural bounty is evident at the Sunday morning Temescal Farmers' Market and, on a daily basis, at Market Hall, Oakland's temple to food (and wine), with butcher, baker, wine merchant, fishmonger and deli. The urban enclave has not one, but two food celebrities – Doughnut Dolly (who pumps hazelnut or quince-flavored cream into your pastry puff ) and Bakesale Betty (whose fried-chicken-and-coleslaw sandwiches inspire long lineups).

And several esteemed San Francisco chefs have recently started their own eateries here. For instance, Charlie Parker joined Plum, restaurateur Daniel Patterson's new venture in Oakland. After training in San Francisco, Oaklander James Syhabout started up Commis in his hometown and it became the first restaurant in the city to win a Michelin star.

While there's much cause for celebration, unfortunately none of the city's long-time problems show any sign of going away. Oakland is deep in debt, has a high violent crime rate, a poorly maintained infrastructure and pockets of intense, endemic poverty – a poverty that disproportionately affects its long-established African-American community.

Part of the local story is, indeed, similar to Brooklyn's: For years, creative people have come to Oakland because they were priced out of San Francisco.

"That's been happening for a long time," Temescal historian and artist Jeff Norman says, as his chickens cluck in a backyard filled with spiky artichoke plants. (Urban farming is big here.) He sketches out the demographic mix. "Temescal used to be Italian, working-class, but, by the time I had moved here, in the 1980s, it had become fairly African-American . … Some Korean businesses were moving in, and a wave of immigrants from East Africa came, some setting up Ethiopian restaurants. There were a bunch of Cal [Berkeley] students living here, because of the low rents … and artists, like me."

Oakland's robust artistic community shows off its work during the first Friday of every month, in an event called Art Murmur. It is a quirky, moveable fest, with the city's many galleries and artsy stores staying open late.

In addition to music and exuberant art, you might be able to take in less-expected events on a First Friday (as it's also called). Recently, TheMuppets movie was projected on the side of a former orphanage turned art school, with a multiracial crowd of grandparents, parents (often same-sex) and kids all chowing on bites from gourmet food-trucks. Or a band (such as Wilco or the Decemberists) or a classic Bacall/Bogart film might play at one of the lovingly restored movie palaces, the Paramount (1931) or the Fox (1928).

After, you might throw in your lot with the vintage-wearing hipsters playing bocce at the raucous, but somehow easygoing bar Make Westing, named for a line from local hero Jack London.

Even if a visit doesn't coincide with a First Friday, there's lots to do in Oakland. Here's a list to get you started.

and Library at OaklandSet in

an old Carnegie-endowed library, this museum tells the stories

Art MurmurThis gallery hop and street party takes place throughout the city on the first Friday of each month, from 6 to 9 p.m. A map of the venues and further information is available at oaklandartmurmur.org.

Lake Merritt Actually a former lagoon that once ran off the San Francisco Bay, Lake Merritt has, rather incongruously, gondolas for hire on it, joggers (and Canada Geese) all around it, and a popular, retro amusement park, Children's Fairyland, next to it.

Oakland Museum of CaliforniaThe multimedia main exhibition adeptly tells the California story, moving from pre-colonization days, via the Spanish-Mission era and the Gold Rush, to the War on the Pacific, the Summer of Love, and, now, the current dot-com boom. 1000 Oak Street, 510-318-8400,museumca.org

Temescal Farmers' MarketA market, yes, but also a weekly happening (on Sundays year-round, from 9 a.m. to 1 p.m.). Dog owners can check their animals in to an on-site daycare; while banjos play, shoppers interrogate farmers about their fertilization practices; after eating a breakfast of crepes, children in crocs splash through a shallow nearby stream. 5300 Claremont Ave, urbanvillageonline.com/markets/temescal

Where to Eat and Drink

Brown Sugar KitchenThe airy waffles at this soul-food diner have food writers travelling hundreds of miles, but the fried chicken that can be ordered with the waffles also deserves high praise. 2534 Mandela Parkway, 510-839-7685, brownsugarkitchen.com

FuseBoxEvery plate that emerges from the open kitchen of this lunch-only Korean-plus bistro in West Oakland is visual perfection – and the tastes are as satisfying. 2311A Magnolia St, 510-444-3100, fuseboxoakland.com

Scream Sorbet The organic produce at all those local farmers' markets somehow gets more tasty as it's distilled into sorbet. Sampling, within reason, is encouraged. 5030 Telegraph Ave., 510-394-5030, screamsorbet.com

DogwoodThe exposed brick walls of Alexeis Filipello's new bar are covered in photos of industrial-era Oakland, but its cocktails and cured meats are very much of this moment. 1644 Telegraph Ave., 510-444-6669, bardogwood.com.

Make Westing The bar's owners are originally from the East Bay, but have lived in Brooklyn, and it shows – from the indoor bocce courts to the abstract art lining its black walls. 1741 Telegraph Ave., 510-251-1400, makewesting.com.

Claremont HotelThis tower-topped hotel up on the hills, just over the border into Berkeley, is nearly 100 years old. It looks oddly, like something out of an the Raj or maybe, more appropriately, F. Scott Fitzgerald novel. Rooms start at $189. 41 Tunnel Road, Berkeley, 510-843-3000, claremontresort.com

Market HallNew Zealand ex-pat Sara Wilson wasn't sure this food-hall was going to work when she started it in 1987, but it has become the centrepiece of the bougie Rockridge neighborhood – and the purveyor of a bewildering variety of foodstuffs, mustards, olive oils, chutneys and cookbooks – with super sandwiches for the would-be picnicker. 5655 College Ave., 510-250-6000, rockridgemarkethall.com

OaklandishThis shop donates a chunk of its proceeds from sale

of Oakland swag to charities –

its designers came up with the T-shirts showing the Bay Bridge and the cranes, and another with one of Merritt Lake's pesky Canada geese packaged up and ready to be shipped north of the border. 1444 Broadway, 510-251-9500,oaklandish.com

Local writer Michael Chabon's latest novel, the just released Telegraph Avenue, is set, largely, on the strip of that iconic street, that runs through Temescal – and adds a literary aspect to Oakland's current moment. James Joyce once boasted that if Dublin suddenly disappeared, it could be reconstructed from his novel Ulysses. In Telegraph Avenue, Chabon often references the Irishman's magnum opus, both overtly and covertly. "When you're writing about a second city, a smaller, more provincial centre, then you sure think of what Joyce did with Dublin," he said in a recent phone interview. "At least, I did."

But Chabon also delves beneath the area's agreeable, somewhat shambolic surface, introducing the reader to two couples one might easily bump into at the Sunday Temescal Farmers' Market. One couple is black, the other white. The women work together as midwives, the men jointly own a vintage vinyl store, Brokeland Records – "no one calls the city Brokeland, I made that up," he said. The stew of Bohemian aspirations and earnest, right-on politics distributed among the foursome feels just so. Following them around Oakland, the novel places each under various stresses, and wonders if they can all get along. 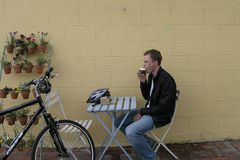 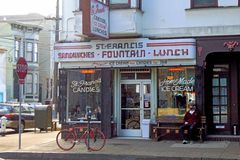 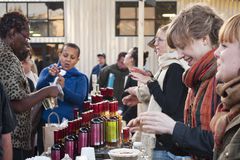