How does a traveller visit Venice and not feel like she’s contributing to the tourist crush? Catherine Dawson March finds the answer when she gets off the beaten path and learns to steer a traditional ‘shrimp-tailed boat’ through the city’s storied canals 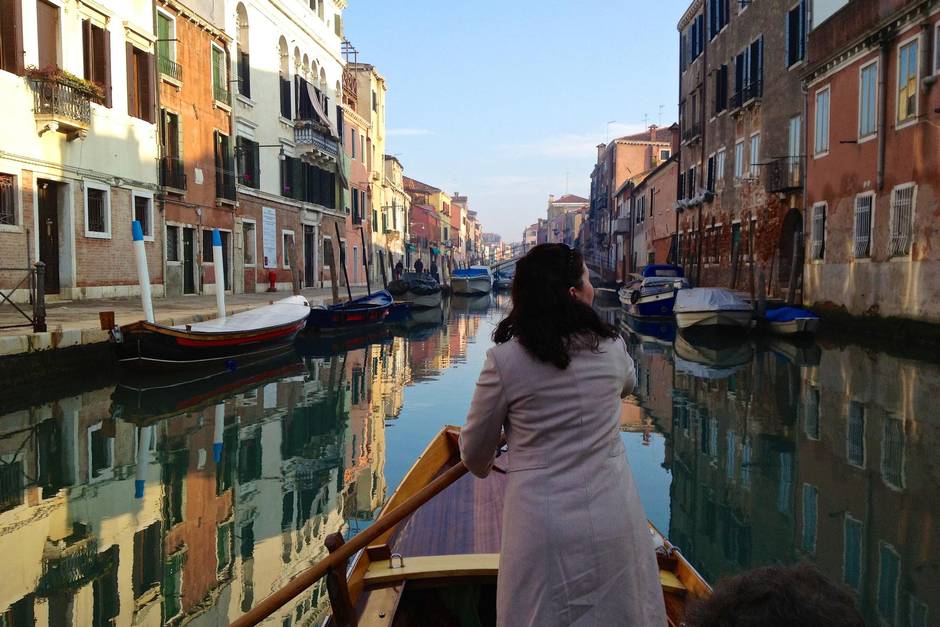 “Venice: it’s not Disneyland.” So spoke the Sharpie scrawl on a small alley just off a busy shopping street near the Rialto Bridge, but not so far away that the tourists streaming by wouldn’t see it.

Before I’d come, I read about signs popping up in the city shouting “Tourists go away.” Now that I was here I, too, noted the cold stares or complete indifference from locals when wandering the quieter streets. And considering the shoulder-to-shoulder throng that was now parting around me like the Red Sea as I stopped to read the graffiti, it’s hard to blame Venetians for being irritated.

Tourism may bring this historic city millions in revenue, but it’s also led to sky-high rents ordinary Venetians can’t afford, turning public transit into tourist shuttles and straining the city’s ancient foundations as more and more cruise ships and motorboats ply the waters. This year, 529 cruise ships are expected to dock with up to 1.55 million cruise-ship day trippers descending on Venice, according to a report in the business website ItalyEurope 24.

In his new book If Venice Dies, scholar Salvatore Settis looks at the insidious effects of tourism on the city.

Annually, Settis writes, eight million visitors descend on Venice’s historical centre, which in 2015 was home to only 56,072 residents – a number that’s dropped strikingly since 1981 (93,598 residents) and precipitously since 1951 when 174,808 called it home. If the title lays bare his concern, his prose drives it home: “The hit-and-run tourism now afflicting Venice is both passively and archaically being mistaken for a gift from the heavens,” he writes, “something which is worth emptying out the city for, forcing Venetians to abandon their ancient dignity and turning them into beggars.” 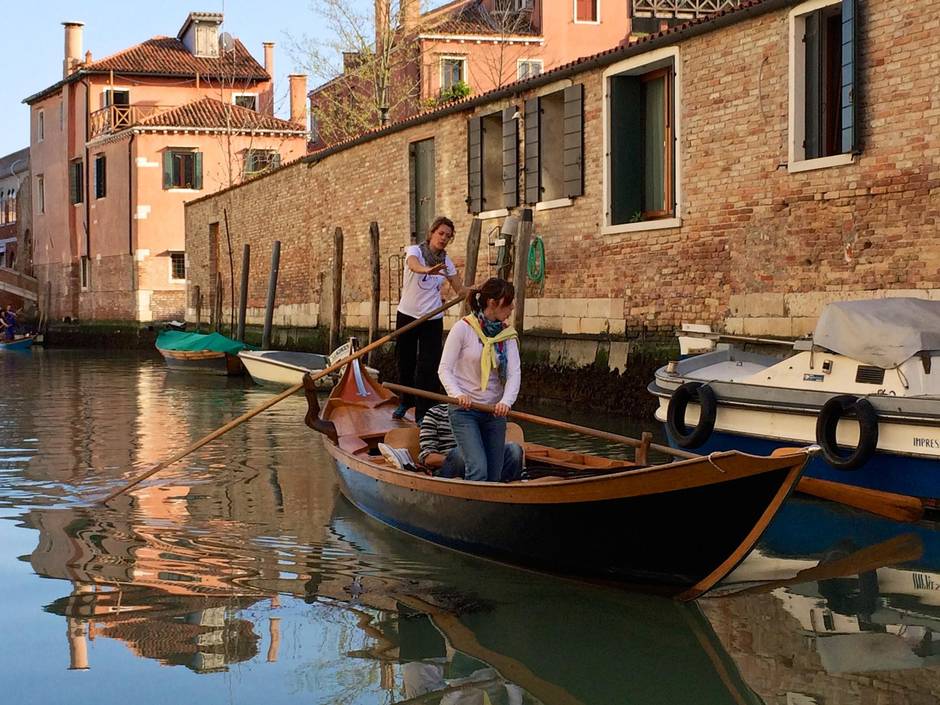 Venice, however, is one of those magical places you’ve got to see to believe, even if the locals are not so thrilled you’ve come. No one wants to be a “hit and run” tourist, searching only for Instagram brags and social media shills. But can you still visit Venice without the guilt?

To assuage my own, I spent an afternoon immersed in some of its tradition far from the madding crowd by learning to row voga alla Veneta (standing up, in the Venetian way) on board a batea a coa de gambero (shrimp-tailed boat).

You’ve seen a gondola, maybe you’ve even been rowed across the Grand Canal in a tragheto – but these shrimp-tailed boats are different, and rarer. They are shorter and wider with a pointed fore and aft, and the back curls up like a shrimp tail. They used to be a common sight in the canals before outboard engines took over. Now Row Venice, a six-year-old, non-profit, almost entirely female rowing club, is trying to bring them back. Enter the eager tourist.

My daughter and I booked our time online, then studied the precise directions to meet our Row Venice guide in a far corner of northwest Venice. The walk here was when I started noticing the Venetian cold shoulder, but Sofia d’Aloja, our very fit, very tanned, very young instructor bounded toward us with a warm smile and a eagerness to get us shipshape and Venice fashion. 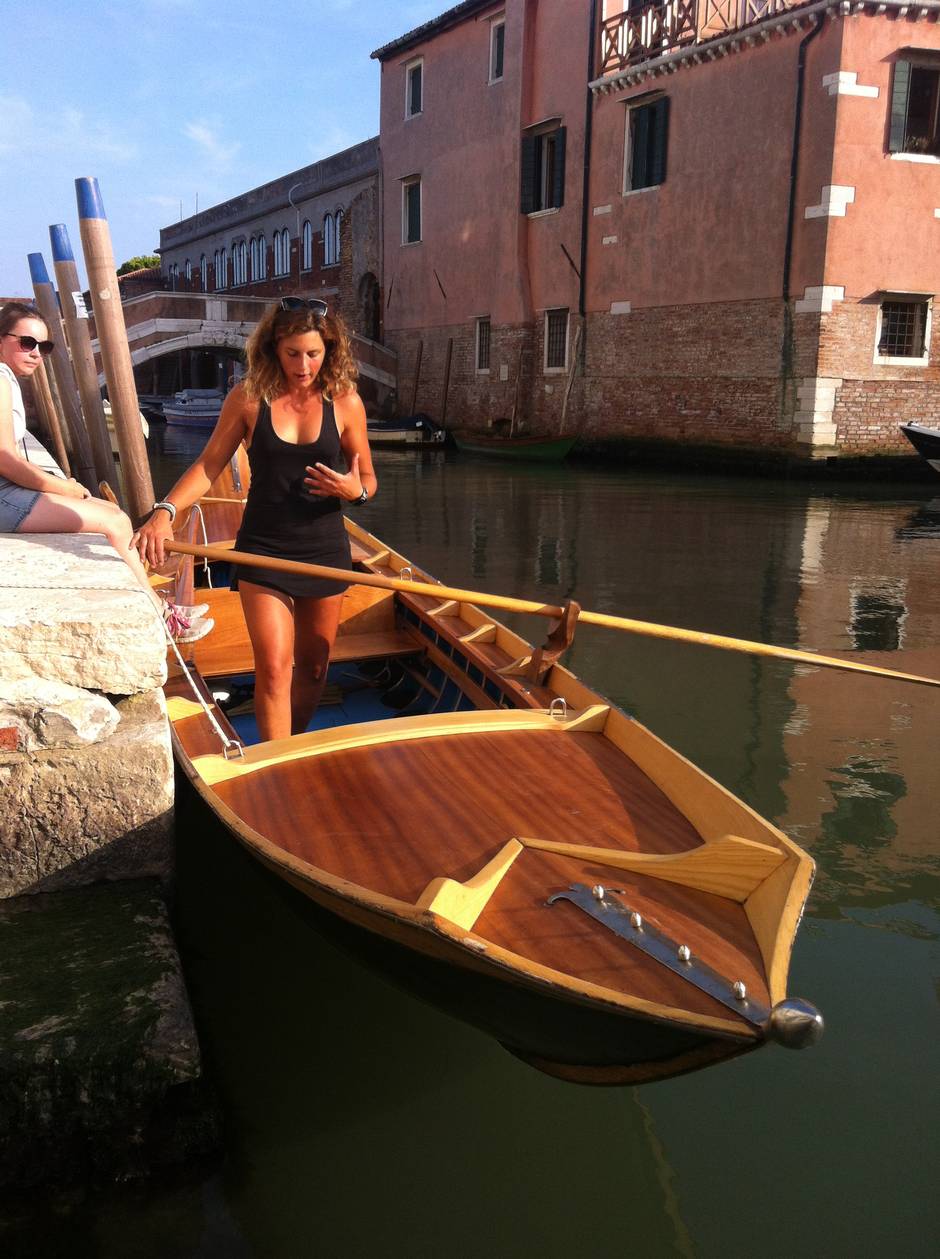 She went over the technique carefully, filled us in on this sturdy little boat’s history in Venice, then handed over the 3.5-metre-long oar so we could give it a shot.

I was surprised at how stable the 1.5-metre-wide, eight-metre-long boat was as I stepped in. I assumed the position: standing, feet apart, oar grasped at waist level, I pushed forward with a leg lunge, twisted my wrists and then pulled the oar toward me, shifting back onto my left leg. Suffice to say, it takes some time to feel like you could go anywhere but Sofia cheerfully declared my teenage daughter and I ready to push off and we crept along the sleepy canal. The forcola, or oarlock, which on all Ventian watercraft are handmade wooden works of art, do not exactly “lock” the oar in place. Mine kept dropping out and with each grunt of my frustration and, naturally, a “Sorry!” to Sofia trying to steer from the stern deck, she’d laugh and say, “Do not be so stressed, this is Venice!”

I took her advice and started to look up at tall tenement buildings, what pass for high-rises in Venice, in the old Jewish Ghetto as we glided by. In this part of Cannaregio, there were fewer architectural ornaments, I don’t think I saw one balustrade and not many ogee arches, but European and Far Eastern influences were still clear. And this was a real neighbourhood with locals going about their business. Sofia, when she wasn’t filling us in on the local history and current events, called out greetings to friends. Tourist crowds were notable by their absence.

Then the canal ended and the Lagoon began and we found ourselves in the busy channel, bobbing and weaving through large wakes. Tourists leaned out of vaporettos to take our picture. It was surreal. 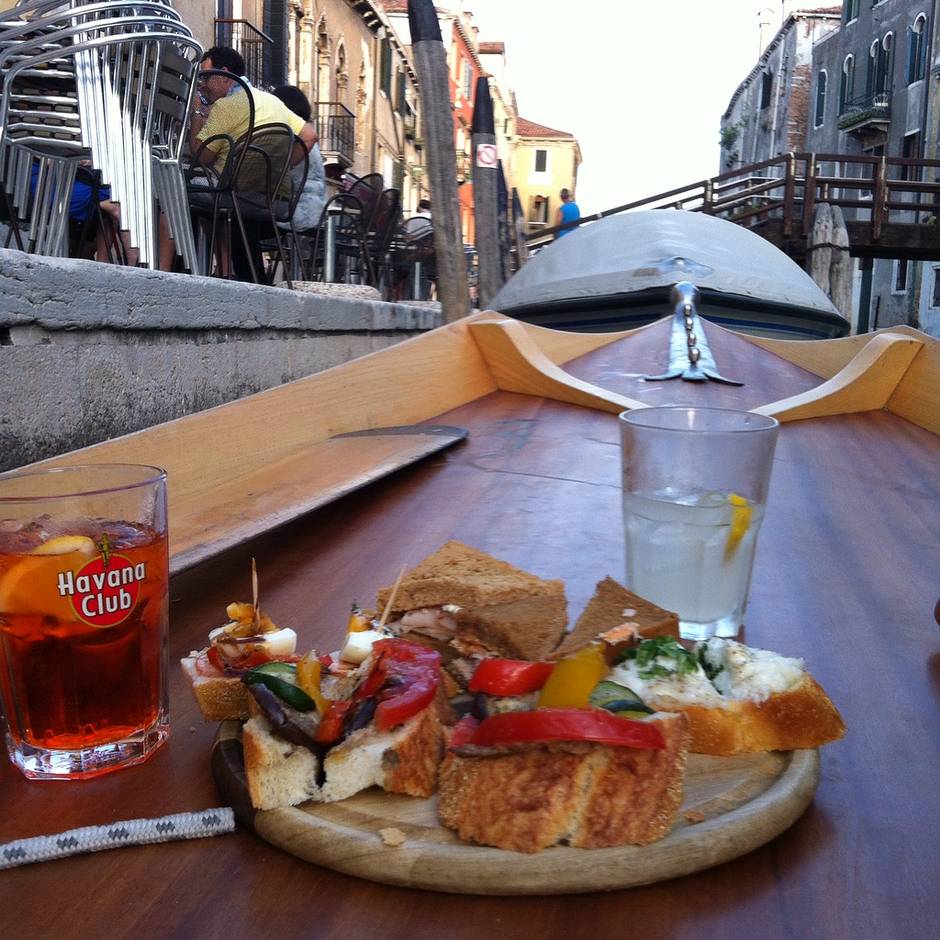 Stopping for cicchetti and a Venetian Spritz in Cannaregio, Venice. (Catherine Dawson March / The Globe and Mail)

Quickly, we rowed to a less trafficked spot and refined our technique within sight of the islands of Murano and San Michele, the late-day sun making the church’s red stone walls and white domes glow.

Sofia handed over her oar and sat back to watch the sun set, giving my daughter and me tips and directions while making sure to capture our earnest attempt to “live like a local” on camera.

We didn’t really get very far but the view was lovely, the wind was blowing through our hair and for the first time since we’d arrived I realized we were laughing out loud and having fun – not just pushing past other visitors rushing to the next must-see.

But the best part was just beginning. Sofia was going to take us to a couple of her favourite bacari (small, local bars) for traditional Venetian “happy hour” and so we made our way back to Cannaregio’s canals. 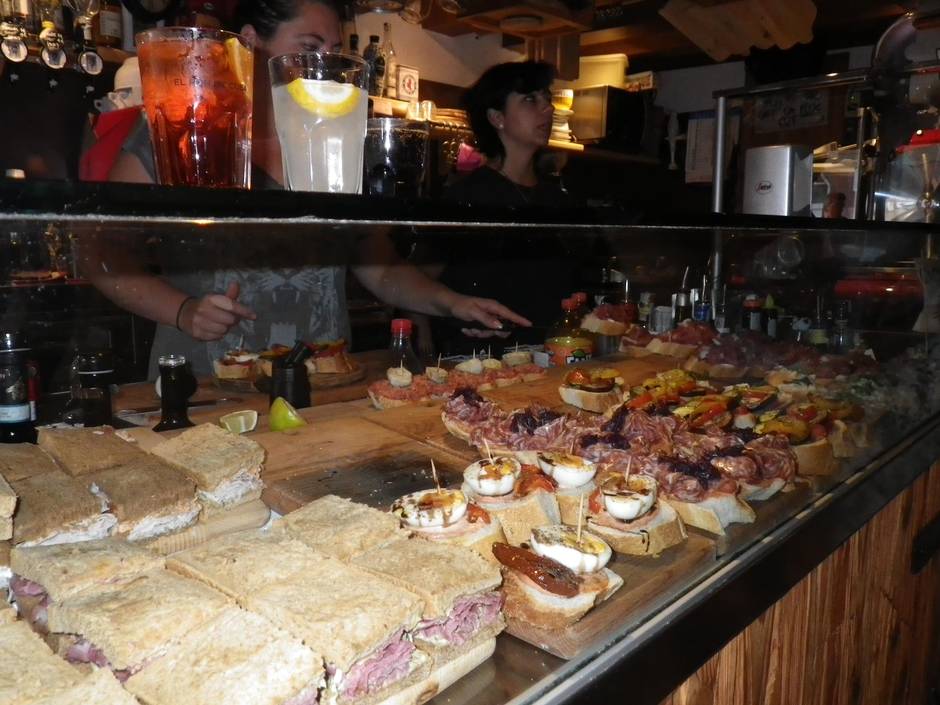 At a bacari in Cannaregio, the cicheti offerings are numerous, hearty and cheap, around one euro each. (Catherine Dawson March, The Globe and Mail)

“Short your oar,” she called to my daughter, who pulled in her oar as we turned into a narrow waterway and slipped in behind another shrimp-tailed rowboat with a group of twentysomethings heading to the bars. Washing hung to dry over our heads and Sofia had to use her leg to push us off the canal walls to keep moving. A motorboat of grumbling teenagers got stuck behind us and began harassing her about the “touristas” taking too long; she shot back in Italian as good as she got.

But her next shout – “Oe! a premando!” – was to warn other boaters we were making a sharp left onto the Misericordia canal. Here, neighbours stood in lively groups or gathered around tiny tables piled with cicheti, hearty tapas-like snacks. We tied up along the fondamenta and then, gingerly, took the mossy steps up to the sidewalk and into Birreria Zawn, a hole in the wall with a long bar stacked with rows of crostini topped with creamed cod or prawns or artichokes or prosciutto or asparagus or tripe – and that’s just the first row – all drizzled with olive oil and balsamic vinegar. Choosing was as difficult as picking out macaron flavours in a Parisian patisserie. We settled on a few and ate them back in the boat – balancing the wooden plate on our knees and resting our glasses of Aperol-laced spritz or lemonade on the gunwale. 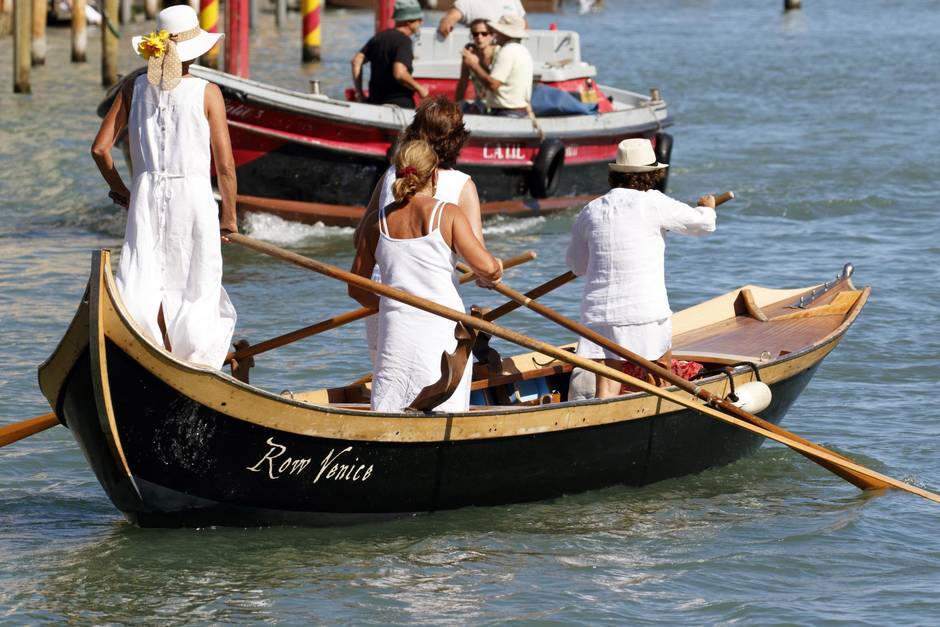 As we ate we got to know Sofia better. We talked about the pressures the city was under with mass tourism and how our 28-year-old guide was one of the few young Venetians moving from the mainland to live and work in the famed centre. Sofia told us about the Regata Storica she would be part of in a few days. Held annually for centuries, it is a colourful water pageant, with 16th-century boats sailing up the Grand Canal with officials dressed as the doge and other historical figures, and there’s a serious race component. Sofia and Row Venice staff train hard to qualify and compete, and this year took issue with the inferior prize money paid out to female competitors. My own 16-year-old budding feminist nodded sagely, noting how women in many countries face the same issue.

We lost track of the time, and dusk was falling when Sofia negotiated our next mooring spot further along the canal with a regular in no hurry to move. And that’s when I fell in love with this city anew. Far from the sweaty throngs clamouring for a canal-side selfie, we’d found a pocket where my daughter and I were the only noticeable tourists in sight. Thanks to Sofia, we could pretend – just for a little while – that this cicheti tradition was our own, that these friendly and garrulous locals were our neighbours, that this was a Tuesday night like any other. More importantly, we’d go home with a deeper understanding and appreciation for this city the world has loved nearly to death. 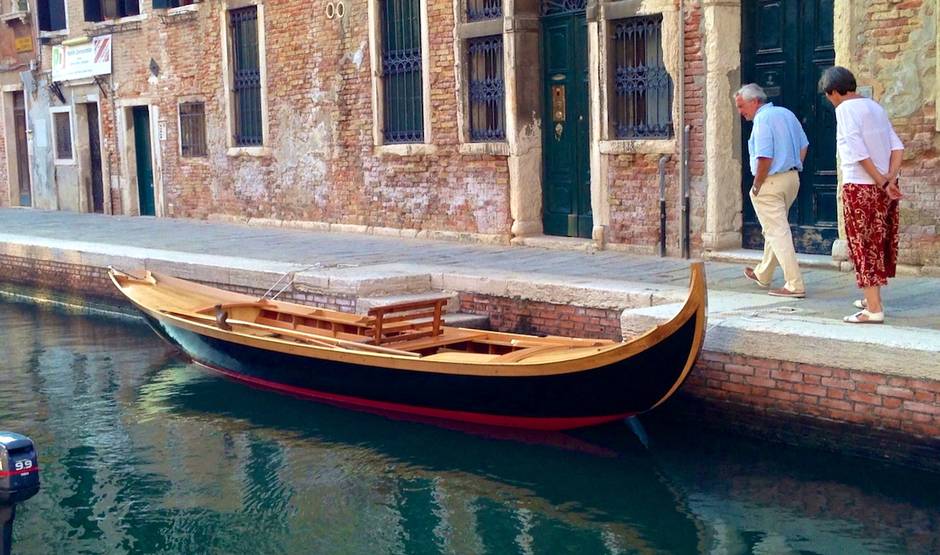 Row Venice offers several types of lessons: 90-minute rows along the canal and into the Lagoon begin at €85 ($125). The Cichetto Row (€240 for two people) lasts about 2 1/2 hours and includes a row to the Lagoon and stops at two bacari for traditional Venetian drinks and snacks (included). If you’re keen on rowing in the Grand Canal, book the 90-minute Vogata di Sera (evening row), starting at €180 for up to four people. rowvenice.org.

Keep your visit water-themed and stay at JW Marriott’s new resort and spa on Isola delle Rose. The 20-minute shuttle (free to any visitor) leaves from St. Mark’s Square regularly. The lush, tranquil island is a true respite from the city’s crowds and the city views are magnificent, especially at sunset. The 266 rooms are scattered over the 16-hectare island with two notable restaurants: Michelin-starred dining at Dopolavoro, and breathtaking rooftop Lagoon and Venice views from Sagra. The rooftop pool alone is worth booking a few nights here. Rooms from €347 ($509). marriott.com.