Temples of gastronomy are not something you necessarily expect in Holland. In general, the country’s food rep leans to the stodgy and the tuberous.

But the quirky idea of building a food market shaped like an inverted U that incorporates apartments in its arch – residents’ windows peeking out of a giant raspberry or avocado in the hallucinatory ceiling mural – is thoroughly Dutch, a typical mix of playfulness and practicality.

The new tunnel-shaped Markthal in Rotterdam is designed by edgy local architecture firm MVRDV. It’s part of a new wave of exciting building projects in the last year or so that has given us a Rotterdam 2.0 of sorts. A city that, formerly, barely registered with travellers, the Dutch port is now on many a must-see list for its unique design sensibility.

Long known for drug alleys, broad daylight hookers and other inevitabilities of being the biggest port city in Europe, Rotterdam is now the hippest place in Holland. With scores of Amsterdammers coming here to party and a maker mindset that evolved out of necessity, it is a place of non-stop design and innovation. 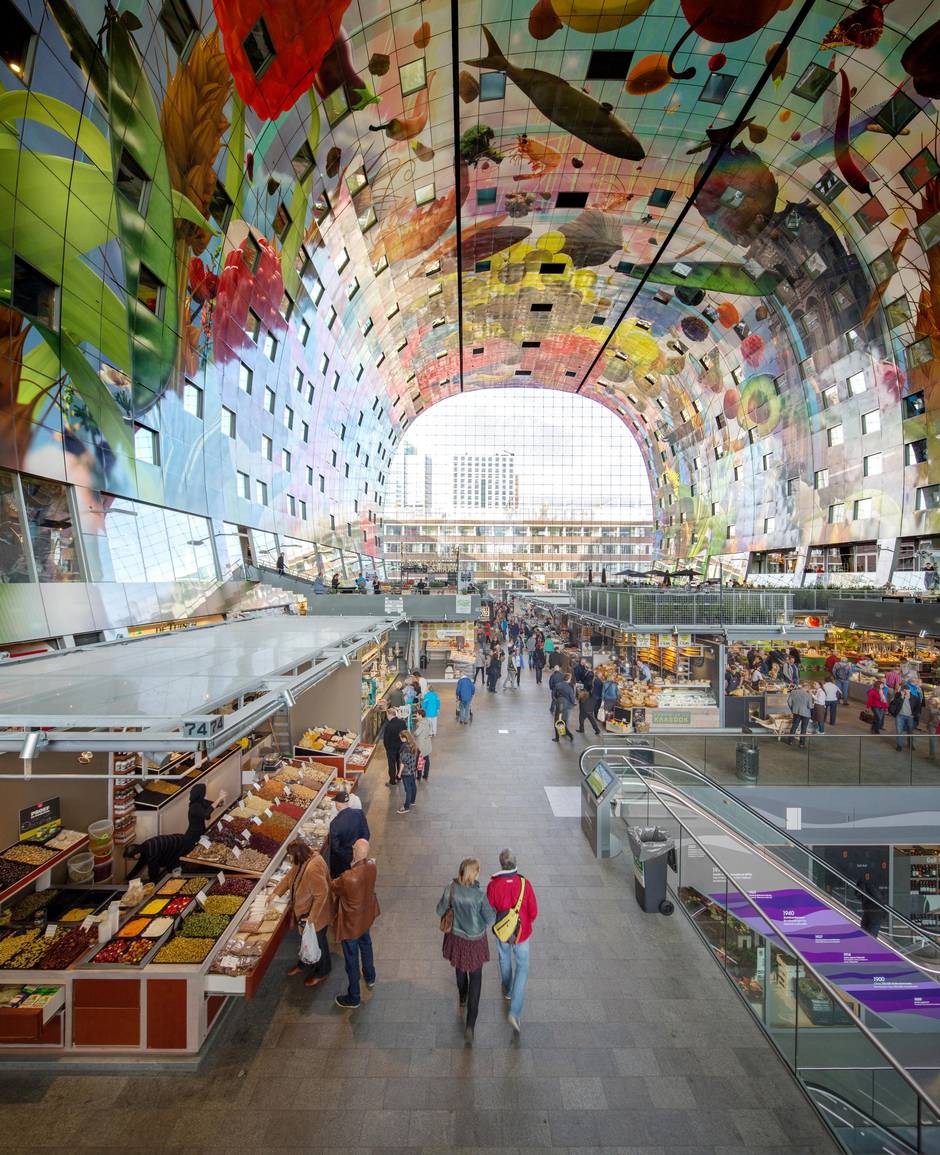 The Markthal’s Horn of Plenty, by Arno Coenen and Iris Roskam, is the largest artwork in the Netherlands. (Photography by Ossip van Duivenbode)

Rotterdam was carpet-bombed in the Second World War, its beautiful historic centre left in shreds. City officials started rebuilding plans four days after the blitz; radically, they decided not to reconstruct it as it was, a medieval city in Amsterdam’s shadow, but to make the city a laboratory of design and urban planning. Inevitably, big names in both those fields lined up for the chance to go wild in the new Rotterdam.

Past decades have given us waves of influential Dutch architecture, notably the largely Rotterdam-based SuperDutch movement spawned from the ideas of Rem Koolhaas’s OMA and Winy Maas of MVRDV, among others. Now a fresh renaissance has brought me to the city.

After arriving at and checking out the brand-new train station, with its soaring angular canopy (its endearing nickname, I learned, is Station Kapsalon, after its resemblance to the aluminum foil container that kapsalon, Holland’s favourite snack, comes in), I step out into a city that looks like it was put together by a particularly creative Lego builder, with tall buildings bulging with extra squares in their middles and upended cubes.

“Because this is a working-class city, the architecture had to be not too serious,” Jan Knikker of MVRDV tells me when we meet at the Markthal over tea made with fresh mint leaves. 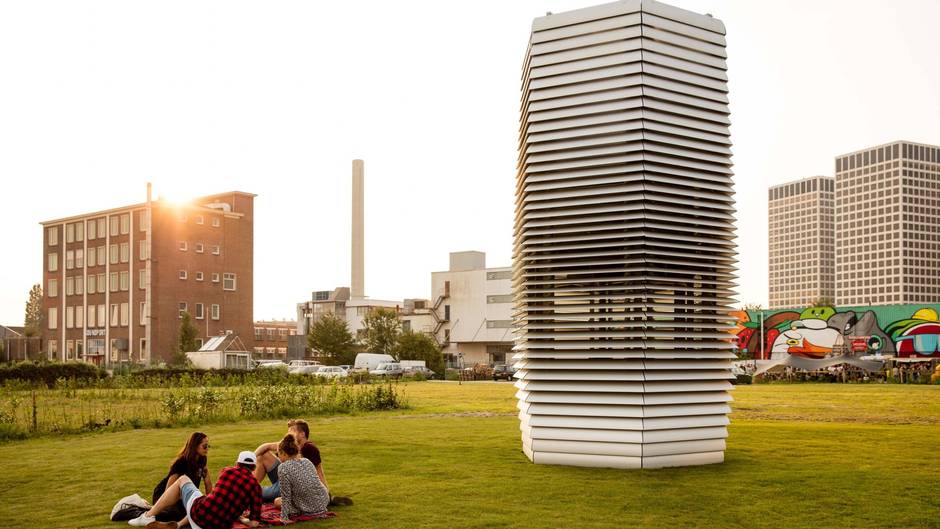 Unique or eye-catching architecture is not hard to come by in Rotterdam, like Daan Roosegaarde's Smog Free Tower. (Photography by Pim Hendriksen)

A welcoming open space that blends with its surroundings, the Markthal also has a slightly comic effect with subtly off-kilter lines. And nothing could be more playful than the aluminum panel mural on the ceiling inside, like “a Big Bang of fruit,” Knikker says. Designed by Arno Coenen and Iris Roskam, it was made with Pixar Animation software.

After checking out the market stands – everything from Old Rotterdammer cheese mongers to Turkish spice merchants – and sampling their wares, I head out and into a forest of upended yellow Rubik’s cubes.

The 1970s social housing project the Cube Houses, designed by Piet Blom, has long been an icon of Rotterdam. The cubic living spaces are tilted at 45 degrees and rest atop pylons, looking treelike. (Toronto was inspired by the idea and built three similar houses on Eastern Avenue in the nineties.) I’ve eyed them before but only on this trip did I learn that you could visit one of the apartments, run by a resident who decided to satisfy the curiosity of passersby and let people take a peek inside. Paying my €3 ($4.48) entry fee, I climb narrow stairs under a tilted ceiling. It feels a little discombobulating walking through, but I guess living in this upended manner is one way to shake up the creative juices.

Walking along the rainy streets, I see ambitious projects for urban development and renewal around every corner. A former dike along the Rotte river is being filled with purified water as it prepares to become the site of RiF010, a water-sports park opening next year: Soon, a 1.5-metre high barrel wave near the train station might just make a hang-ten trip to the North Sea unnecessary.

“We don’t talk, we do” is something I hear a lot here. This city’s residents sidestepped bureaucratic claptrap when they wanted a new bridge. Architects designed one and partly crowdfunded it: The new Luchtsingel pedestrian bridge is a yellow wooden structure that, from the air, resembles a spider, its multiple long legs connecting and rejuvenating dead corners of the city (a beer garden sprouted up on one of the staircases; it’s now every hipster’s late-night drinking spot). 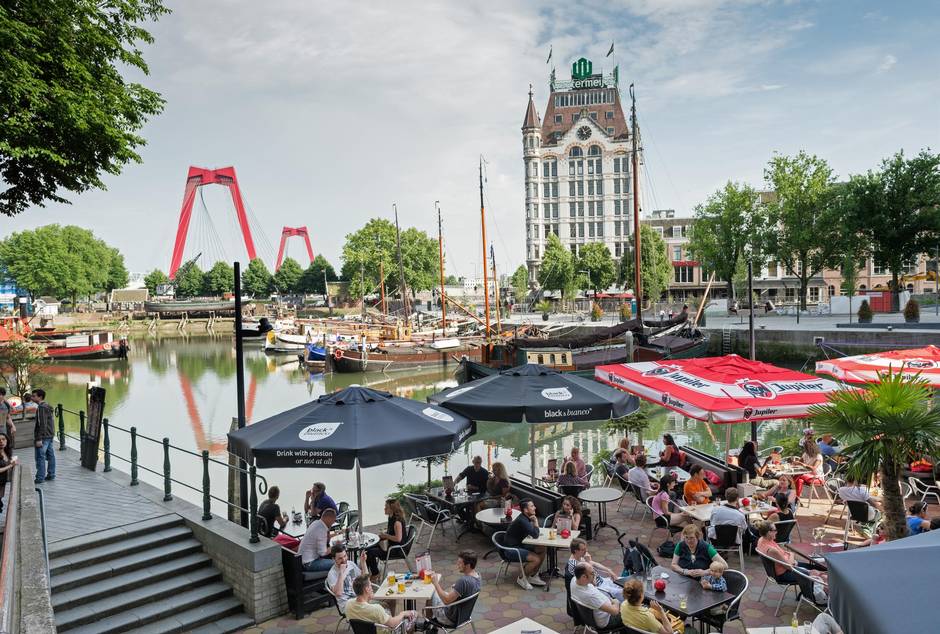 Terrace at the Old Port, Rotterdam’s oldest port in the centre of the city. (Photography by Jan Bijl)

Holland’s current poster child of “next” is Rotterdam-based Daan Roosegaarde, innovator and creator of intelligent highways and sustainable dance floors that power music and lights from dancers’ movements.

I met Roosegaarde over dinner at Las Palmas, Dutch celebrity chef Herman den Blijker’s restaurant. During the dinner (at which a neighbouring table of a dozen men enjoying heaping plates of seafood looked like a contemporary version of an Old Master painting of dining burgemeesters), Roosegaarde told me the world started rediscovering Rotterdam about a year and half ago because of its maker mentality.

Throughout dinner, the self-styled techno-poet provided lively quotes about technology, dreams and engagement, ending the evening with a favourite from Marshall McLuhan: “There are no passengers on spaceship earth. We are all crew.”

The next night I attended the launch party of Roosegaarde’s latest innovation, the seven-metre-high outdoor Smog Free Tower, which essentially offers lung staycations by creating bubbles of clean air. Smog is sucked up into the tower; the waste particles are compressed and made into jewellery. Just a typical Rotterdam party: celebrating turning smog into rings and cufflinks. It was held at Roosegaarde’s studio, in a gorgeous 1937 glass building, and was a real Wes Anderson-like affair that included a member of the Dutch Royal family, a few people dressed as pandas, mayor Ahmed Aboutaleb, a sexy lingerie designer and coat-check girls sporting retro maritime caps.

Also, there was Joep van Lieshout, the Rotterdam enfant terrible of art, whose work explores themes of sustainability and recycling within dystopian frames. His latest installation is an oversized model of the human digestion system located in a bar. 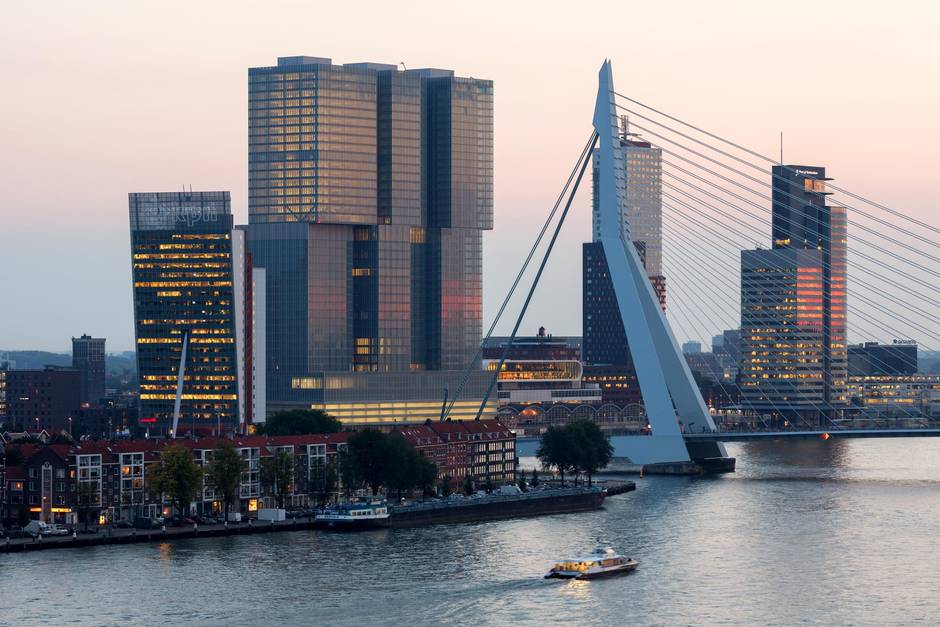 There’s a fair amount of raunchy art in Rotterdam, to be sure. That morning, I had walked past Paul McCarthy’s sculpture in which Father Christmas appears to be holding a butt plug. Artists and spectators alike seem to share an equally salty attitude: Speaking about an outdoor public sculpture, a guest at the party tells me: “Here in Rotterdam, you can pee on a Picasso.”

That’s a port city for you – even if the port system, mechanized to accommodate today’s huge container ship operations, has emptied out the central port area, leaving behind space for new buildings and abandoned magnificent old brick ones with “Sumatra” and “Java” carved on their façades, speaking to the old East India Co. routes that made Holland so rich.

I crossed the mammoth Erasmus bridge that connects North and South Rotterdam on foot, the wind blowing the belt off my trench coat and into the Nieuwe Maas river. But the best way to cross is by water taxi, a minutes-long trip that offers stellar views.

Either way, as you veer toward the south side Wilhelminapier district, the first thing you’ll likely notice is Koolhaas’s new De Rotterdam buildings, opened in 2014. The three towers, which comprise a hotel, offices and residences, are arranged in subtly irregular clusters that seem to separate and merge from different perspectives. In a buzzy city, Wilhelminapier is the buzziest district, housing De Rotterdam’s bars and cafés, the new restaurant at the gorgeous art nouveau Hotel New York in the former offices of the Holland America Line, and the excellent Netherlands Photo Museum, to name a few of its offerings.

But scanning the skyline from the city’s southernmost point, I had one thought: so much new, so much focus on the idea of “next.” Can a city work without any sentimentality? Do they have any in Rotterdam? And yet my last night happened to coincide with World Port Days, when Rotterdammers pay homage to their port, with boat parades, fireworks, teens bopping to Dutch rock along the river bank, and celebrate the rowdy traditions of sailors at trendy bars in the once dodgy Katendrecht quarter. However much they build and innovate, the citizens’ sense of self never seems to venture far from their old port. And there’s something reassuringly lovely about that. 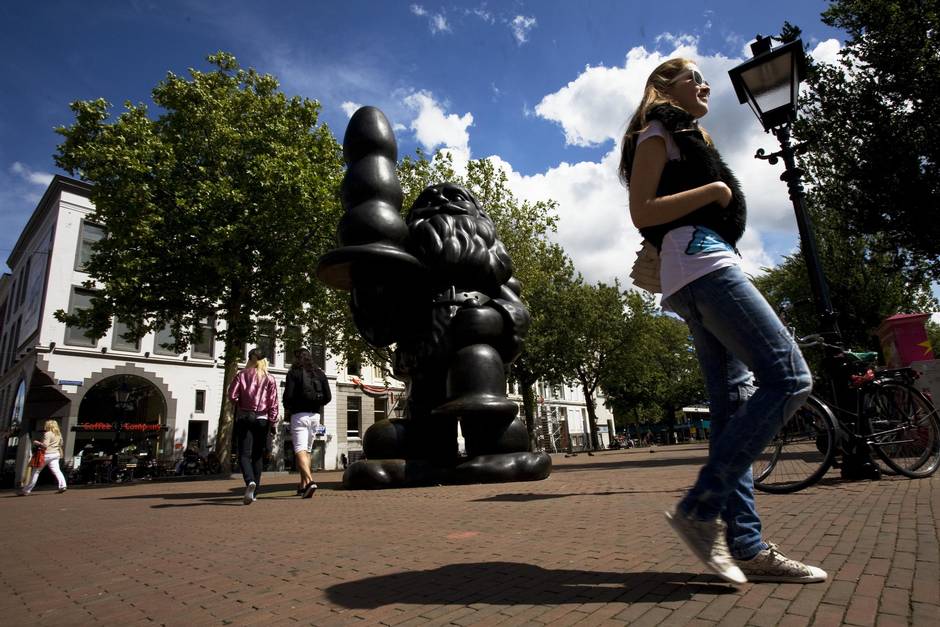 Paul McCarthy's sculpture elicits a grin from a passerby. (Photography by Marc Heeman)

KLM flies direct to Schiphol airport, about 30 minutes by train from Rotterdam, from Montreal, Toronto, Calgary, Vancouver and Edmonton. klm.com

In the now trending, once notorious red-light and crime-ridden Kratendrecht, a cheesemaker, a baker, a brewer have set up shop in the old Fenix warehouse: The new Fenix Food Factory is the perfect place to stock up for a picnic brunch, and marvel at Rotterdam’s skyline. fenixfoodfactory.nl

The nHow Hotel is in the Rem Koolhaas-designed De Rotterdam building. The seventh-floor bar has some of the city’s most spectacular views. nhow-rotterdam.com

Sleep in one of the Cube House apartments thanks to Airbnb. airbnb.ca

Markthal is a draw as much for the architecture as the food on offer. markthalrotterdam.nl

The Sonnenveldhuis: This groundbreaking prewar residence once belonging to a prominent Rotterdam family, near the Boijmans Van Beuningen Museum, is open to visitors, allowing them to experience what it was like to live in a modernist house in the thirties. huissonneveld.nl

Charming little churches of all denominations dotted across town are worth noting. They served the multinational sailors who were at port in Rotterdam.