For the visitor, Chernobyl makes heavy demands on the imagination: Much of what's important can be seen only in the mind's eye.

From the outside, the building where a reactor blew up on April 26, 1986 mostly looks like an ordinary, dull industrial building. Only an odd addition supported by buttresses - the sarcophagus covering the reactor - hints that anything unusual happened here.

The imagination struggles, too, to repopulate nearby Pripyat with the 50,000 people who lived there. Once a busy town built especially for the plant's workers, it's now a silent husk of abandoned apartment towers and scrubby brush slowly overtaking the main square.

And inevitably, the visitor tries to picture the radioactive contamination that's everywhere in the 30-kilometre area around the plant. The dosimeter clipped to a visitor's clothes and occasional meters around the site are the only visual clues, flashing numbers that are mostly meaningless to the layman.

Someone saturated by the vivid wide-screen images of disaster movies may be disappointed at Chernobyl's elusiveness. Yet that's also its power. Confronting the unseen gives a taste of the fear that plagued Ukrainians and much of the world as the shattered plant spewed radioactive fallout into the sky to be swept by winds across the hemisphere.

The opportunity to face these fears on a day trip is becoming increasingly attractive.

A few months ago, it was a few dozen people a week who signed up, according to Dmitry Bobro, deputy director of the government agency that manages the zone around Chernobyl. "But now it's a hundred people a week," he says.

Even before the crisis at a Japanese nuclear plant broke out in March, interest in visiting Chernobyl was growing so much that the Ukrainian government started an initiative to bring in more visitors by streamlining procedures for signing up for the tours.

"We want to say 'come and see for yourselves,'" Emergencies Ministry spokeswoman Yulia Yershova told The Associated Press. Then she added a remark indicating that the meaning of Chernobyl is elusive even for those who live closely with it: "We want to dispel the myth that Chernobyl still remains dangerous for Ukraine and the world."

But Chernobyl is, in fact, still a dangerous place, as the rules for visitors make clear. Don't touch any structures or vegetation, don't sit on the ground or even put your camera tripod there, don't take any item out of the zone, don't eat outdoors. Guides make sure the visitors understand that various spots in the zone are more contaminated than others and insist no one wander off the designated paths.

Visitors also can see the beginnings of a project underlining the dangers that remain - the efforts to build an enormous shelter that will cover the reactor building. Shaped like a behemoth Quonset hut, the shelter will block fallout from escaping when workers begin disassembling the reactor.

Tourists get to see the reactor building only from a few hundred metres away. But the visitors centre from which they can gaze at the plant includes a large and detailed model of the shattered reactor area. It gives pause, and visitors shift their eyes uneasily from the model to the hulking plant building. Most seem relieved to move along.

About two kilometres away lies Pripyat, a visual highlight but an emotional low point. Even though the buildings are slowly falling apart, their clean lines and modern design still show, in marked contrast to some of the shabby settlements the visitor passes through on the bus ride up from Kyiv. Pripyat was a prime example of the ideal Soviet workers' town, and contemplating what the residents lost when they were evacuated after the blast gives the visitor a twinge.

Pripyat's most affecting point may be its rusting amusement park, where a Ferris wheel looms as an inadvertent monument. No giddy couples ever rode the wheel; it was to have opened the week after the explosion.

Although the Chernobyl zone is suffused with silence and loss, there is life there, of a sort. Some of the workers who keep an eye on the now idle plant live in the town of Chernobyl, about 15 kilometres away, for two weeks at a time. And some tours offer visitors the chance to meet some of the few hundred "self-settlers," people who had been moved out of the zone but came back against all advice, risking their health to live out their days in the hamlets where they were born.

After the bus loads up for the trip back to Kyiv, there's still one unsettling moment ahead. At the border of the exclusion zone, everyone must get out and pass through a machine that registers a person's radiation level. The visitor puts his hands up, holds them against two metal plates and waits in a prayer-like posture for a few seconds before, he hopes, a green light flashes and tells him he got though the day safely.

Several agencies offer day-trips to Chernobyl from Kyiv, the Ukrainian capital, with prices starting at around $140 a person depending on group size. Agency websites include Chernobyl Tour and www.tourkiev.com.

Touring Ukraine's underground nuclear base
May 1, 2018 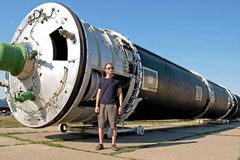 Chernobyl to open to tourists
April 28, 2018
Follow us on Twitter @globeandmail Opens in a new window
Report an error
Due to technical reasons, we have temporarily removed commenting from our articles. We hope to have this fixed soon. Thank you for your patience. If you are looking to give feedback on our new site, please send it along to feedback@globeandmail.com. If you want to write a letter to the editor, please forward to letters@globeandmail.com.
Comments