My lunch has arrived. It's being held captive inside a plastic cylinder about the size of a golf bag. The lionfish, armoured with venomous spikes, are headed to the kitchen and then to my plate. By eating them, I'm really saving the environment.

Lionfish, or pterois, is a venomous fish that's the scourge of the Caribbean. The invasive species has been steadily gobbling its way through the food chain from North Carolina to the Caribbean. Along the way, it has destroyed entire populations of commercially important fish such as grouper and snapper. Campaigns to "Save a reef, eat a lionfish" put the predator on my culinary radar, so I've arrived in Saba, a volcanic island in the Dutch West Indies that's a 12-minute flight from Sint Maarten, to do my part.

It's noon at Brigadoon restaurant when Kai Wulf, park manager for the Saba Conservation Foundation, arrives with my meal. "Increasing demand for lionfish as a food source could help reduce its population," says Wulf, who considers lionfish a serious threat to the Saba Marine Park, an underwater atoll so rich in marine life it's a world-renowned dive site.

The Brigadoon is located in the town of Windwardside within a traditional Saban cottage of white gingerbread trim and a red roof, the 1800s-era building appears lifted from a child's storybook.

Inside the compact kitchen, preparations are under way to eat the enemy. While it was easy for me to embrace the concept of "eat 'em to beat 'em," it's not so easy when faced with a container filled with writhing lionfish.

"At first, many people were skeptical about eating lionfish," Abma says as he dons protective gloves.

"But once I put them on the menu, people were curious to try them."

And diners are coming back for more. "Demand for lionfish is growing so quickly it's becoming a challenge to get a steady supply," he adds. "Fishermen aren't used to catching it. It most often appears in their nets as bycatch." (When lionfish are the goal, nets or spears are used for capture.)

I try not to flinch as Wulf upends the container and a swoosh of lionfish fall onto the cutting board. They are unexpectedly pretty, a cross between a Monarch butterfly and a tall ship, with frilly fins fanning out like billowing sails. Their wow factor makes them the Lady Gaga of aquarium fish, yet if released into the wild, the popular pets are virtually indestructible.

"Their long spikes scare off natural predators," Wulf explains. "Fish like grouper have never seen them before and have to learn how to eat them."

Unlike pufferfish (which can be fatal when eaten), lionfish are not poisonous – merely venomous. But for cooks who get stung by the sharp spines, the venom is extremely painful.

Diners need persuading as well. Nets or spears with paralyzer tips are used to capture the venomous marine fish, but lionfish are edible – unlike pufferfish (which can be fatal when eaten). And for cooks who get stung by the sharp spines, the venom is extremely painful.

"It took me some practice to learn how to prepare it,"Abma says, lifting a pale sliver of meat off the bones as he carefully filets the first one. "You need to make three cuts."

"The concern," Wulf notes, "is not the venomous spines, but rather the presence of ciguatoxin."

Ciguatoxins are marine biotoxins that can cause ciguatera fish poisoning (CFP). The toxins accumulate in fish higher up the reef food chain, so in big eaters such as lionfish – one of the few fish known to have obesity issues – there is the potential for ciguatera buildup. Since the toxin is colourless, tasteless and odourless, the best way to test for its presence is through biochemical tests.

"In the past few months, we've tested several samples of lionfish," Wulf says, "and none have tested positive for ciguatoxin."

"What are the symptoms of ciguatera poisoning?" I ask, thinking no harm in checking given lunch will soon be on the table.

I'm reassured to see that once plated, lionfish looks quite innocuous. Gone are the spikes and dramatic red stripes. It's been baked and topped with beurre blanc.

"I substituted it for creole sauce so you can taste the flavour, " Abma says as he joins us in the dining room.

First, a sip of chilled chardonnay, and then a tentative forkful of fish. It's firm like haddock. And the taste is surprisingly delicate – much like sea bass.

After savouring a few more forkfuls, I ask for seconds.

Another bite, another coral reef saved.

Flights into Saba leave from Sint Maarten's Princess Juliana International Airport. Winair (fly-winair.sx) offers five flights daily. Flight time is 12 minutes. Once there, you'll need a car or taxi to get around the small but mountainous island. Saba Tourist Bureau (sabatourism.com) has an office in the town of Windwardside. The Saba Conservation Foundation (sabapark.org) offers details on hiking trails as well as dive sites. Note that diving in the spectacular Saba National Marine Park can be done only under the guidance of one of the local dive shops.

Brigadoon Restaurant is located on Windwardside's main street and, in addition to lionfish (when available), its menu offerings include whole Saban lobster fresh from a live tank, mahi mahi served grilled with ginger-teriyaki glaze and prime rib with all the fixings on Thursdays. Open daily at 5 p.m. No website but check their Facebook page BrigadoonSaba for specials, hours and menu. Reservations recommended. 599-416-2380.

Scout's Place (scoutsplace.com) is a dive shop, hotel, restaurant and bar rolled into one. Friday night karaoke, Saban lobster and Caribbean-style goat stew make it a popular hangout for locals, expats and visitors to Windwardside.

The swankiest hotel (featuring a new spa with uninterrupted views of the Caribbean) is the 12-suite Queen's Gardens Resort (rooms from $260 U.S.; queensaba.com) located on a hilltop overlooking the island's capital, The Bottom. In Windwardside, the Cottage Club Hotel (rooms from $130 U.S.; cottage-club.com) is a collection of 10 Saban-style bungalows set in lush gardens and within easy walking distance to town. Most hotels offer diving packages.

The writer was a guest of Saba Tourism.

How we planned our St. Martin family vacation (without the Internet)
October 12, 2015
One Caribbean island, two ways: Refined or relaxed on Saint Martin, which will you choose?
January 28, 2013 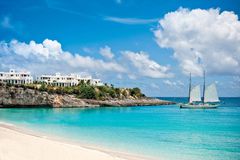 A remote island with no beaches? Paradise found
January 28, 2012 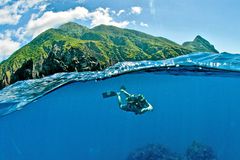