When it comes to hiking in Africa, Mount Kilimanjaro claims all the fame: Snow-capped and wreathed in clouds, it’s the highest peak on the continent and the tallest free-standing mountain in the world. As an adrenalin junkie and a hopeless romantic I admit to being tempted, but the price of a climb – up to $4,000 – forced me to look for cheaper alternatives.

I stumbled upon the Simien Mountains in Ethiopia and within a few minutes was utterly sold. A series of jaw-dropping peaks, plateaus and valleys in the northern Ethiopian Highlands, the range is part of Simien National Park, a 1978 UNESCO World Heritage Site. The hills are home to the socially adventurous gelada baboons, the elusive Ethiopian wolves and the shy but regal walia ibex, a goat found nowhere else in the world. Years of plateau erosion have created one of the most spectacular landscapes on Earth, and if you’re a beginner on a budget like me, few mountain ranges can offer you more.

My journey began by haggling a price with online tour companies, which quoted me between $600 and $2,000 for an all-inclusive four-day hike. This looked like a bit of a gimmick to me, and I was sure the agents would charge me as much as they could from behind their computer screens. I was proven right, and through the grapevine learned that the cheapest way to book a climb was last minute, upon arrival in the northern Ethiopian city of Gondar. 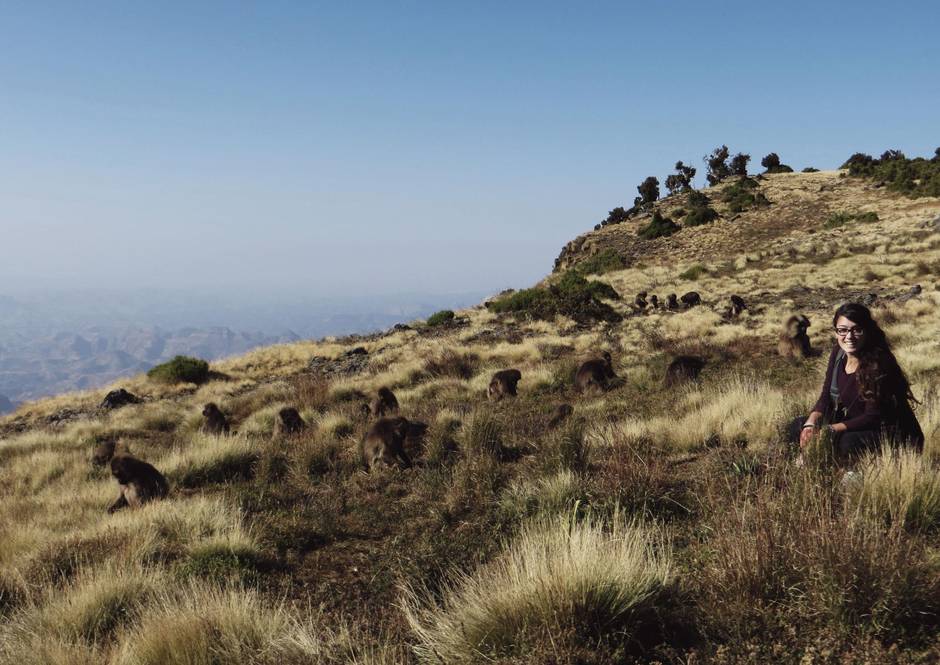 The national park was named a UNESCO World Heritage Site in 1978. (Photos by Elizabeth McSheffrey)

I took a chance, and at the airport in Gondar met a sprightly young booking agent named Bocata. We negotiated our deal in town: $435 for a four-day hike including food, accommodation, porters, a guide and round-trip transportation from the city to the park. I ordered a beer to celebrate my bargaining skills, sat on a patio and watched livestock scurry through the crumbling streets (I later learned that another couple got the same package for $375 by forcing multiple agents to compete for their business).

My mountain adventure began in the small town of Debarq, also known as “the Gateway to the Simien Mountains.” I joined a group of other tourists, accompanied by an experienced guide named Lej and a gun-toting scout who, to our great surprise, climbed the entire range in a pair of plastic sandals. We hiked at our own pace over challenging but manageable terrain, and camped overnight in tents at designated checkpoints. Every meal was a veritable smorgasbord, and we were provided ample break time for lunch, water and photography throughout our climb.

The Simien Mountains are almost uniquely diverse in their geological formation, boasting rippling highlands, cliffs and gorges of overwhelming natural beauty. The scenery changed every few hours from winding forest on the cliffs to rolling hills of yellow barley, almost biblical in appearance. We passed some of the most beautiful flora and fauna I have ever seen – rich eucalyptus groves, giant lobelia, icy-white everlastings, red hot pokers and mountain palm trees. We stopped for a drink at the great Jinbar Waterfall, which tumbles more than 500 metres into the bottomless Geech Abyss, and had lunch by the cool streams that run down the mountain.

Gelada baboons – famous for their protruding, “bleeding heart” chests – became regular company, and we observed their unusual eating, playing and grooming habits from within a few metres almost every day.

Verreaux’s eagles, lanner falcons and augur buzzards soared over our campsites, and we kept our eyes peeled for the rare Ethiopian wolves and walia ibexes, both of which are species endemic to Ethiopia. 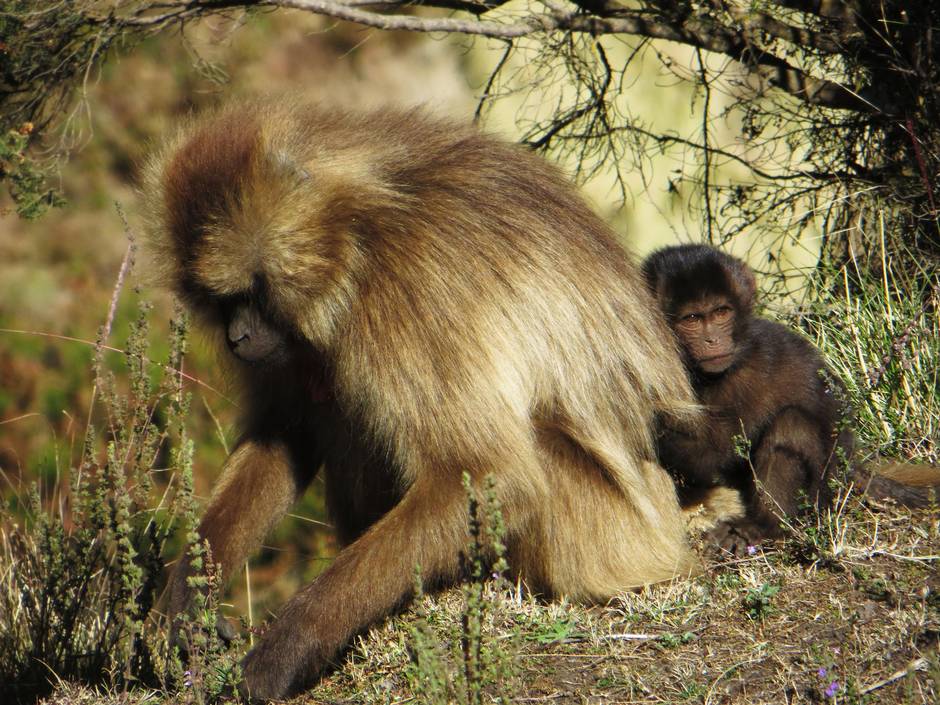 Gelada baboons are just one of the species that can be observed on the climb.

We never saw the elusive wolves, but on the very last day found a group of male ibexes scaling the slopes. Our guide had insisted we get up at 6 a.m. that day to optimize our chances, and the sight of these powerful goats – their arching, ribbed horns more than a metre in length – made marching through the frigid morning temperatures more than worthwhile. They were quite a dramatic contrast from the grazing goats we shared the hiking trails with, and it was truly a privilege to have seen them (we were the only climbers who did that day).

But the most fascinating interactions you’ll have on the Simien Mountains isn’t with the animals – it’s with the incredible people you meet along the way. The Amhara have villages all over the national park and subsistence goat, cattle and barley farmers peppered the hills throughout our hike.

On Day 2 of our climb, we were invited for a traditional Ethiopian coffee ceremony in the village of Geech, about 3,400 metres above sea level, in the mud-plastered home of the village leader’s third wife, a mother of four in her early twenties. Chickens ran freely throughout the small, dark hut as she ground the coffee beans by hand and told us about the rising prices of oil, barley, millet and teff, and I distinctly remember thinking: You can’t get this on Kilimanjaro. 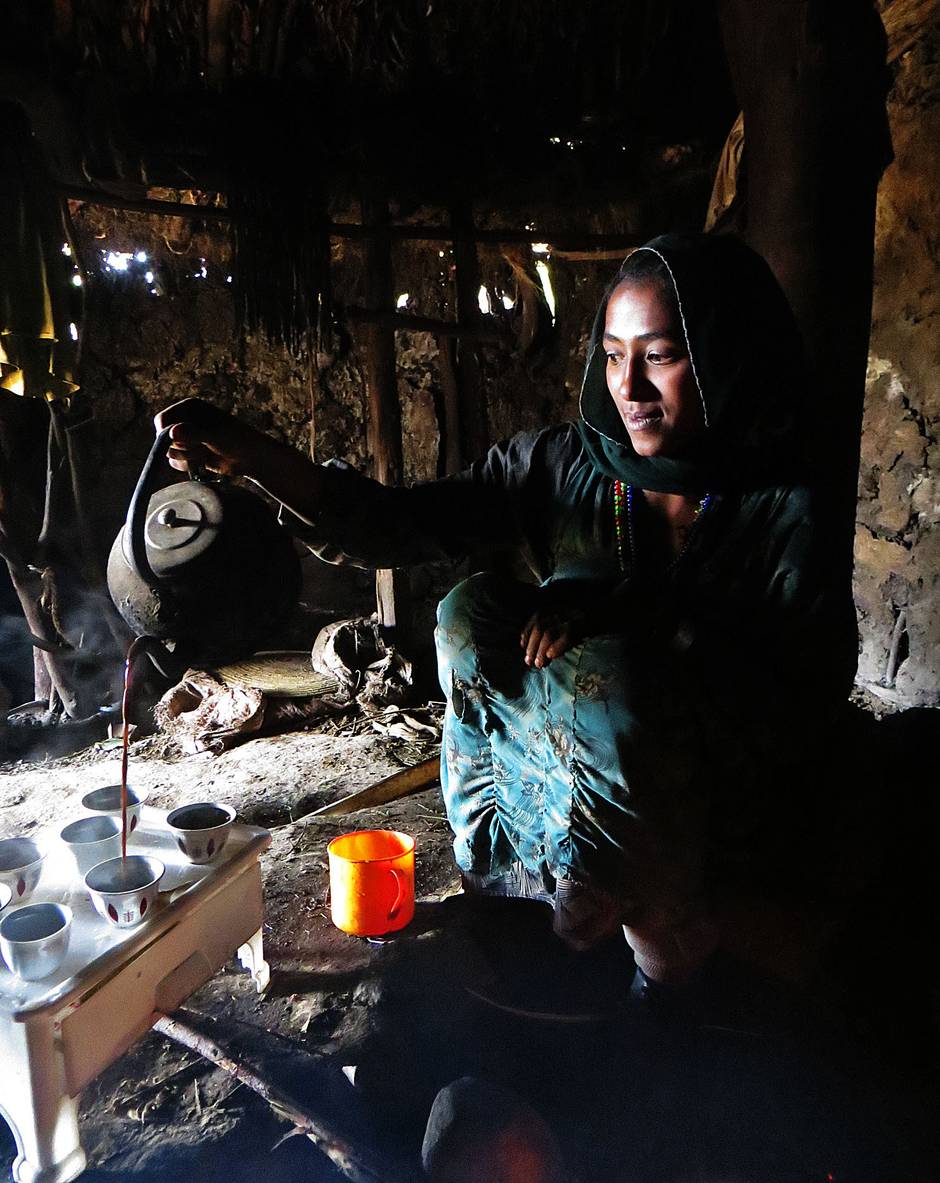 On Day 2 of our climb, we were invited for a traditional Ethiopian coffee ceremony in the village of Geech, about 3,400 metres above sea level, in the mud-plastered home of the village leader’s third wife.

Ethiopia is a mysterious and captivating country, simultaneously progressive yet frozen in time. In the Simien Mountains, little has changed over the past hundred years, and running water and electricity are foreign to its residents, many of whom walk for days to Debarq for supplies despite the availability of trucks and buses. Lej, our guide, is the only member of his family to have ever completed high school and left his village near the mountain camp of Chennek.

At last, on the fourth day, we reached the summit of Mount Bwahit, the third-highest mountain in Ethiopia with an altitude of nearly 4,440 metres. A group of Amhara girls had hiked more than two hours to reach the top before us to sell little baskets, necklaces and religious paraphernalia.

For 50 birr (about $3 Canadian) I bought a solid silver coin emblazoned with the face of Queen Sheba, a token they promised me was an “original artifact” more than 500 years old.

I peered over the peak at the clouds, rifts and valleys below, and couldn’t imagine having picked any other mountain in Africa. 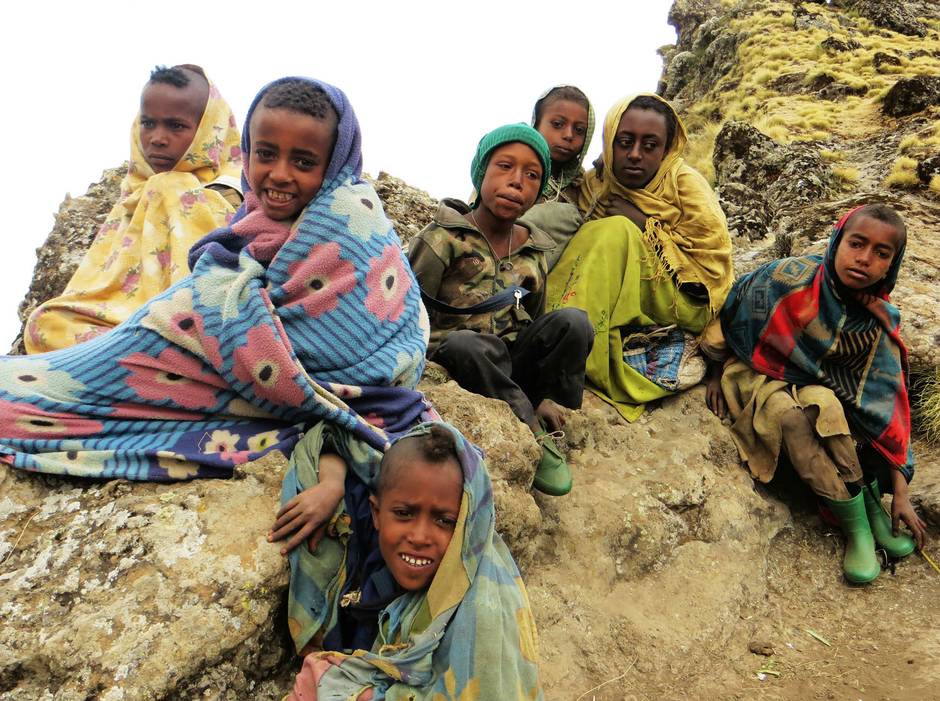 The Amhara people have villages all over the Simien National Park, and children often wait to watch hikers pass through the trails as a form of entertainment.

Temperatures in the Simien Mountains vary based on altitude, and it is important to pack adequate clothing for cold conditions in the mornings and evenings, and hot conditions during the afternoons.

The best time to book a trip is between October and May, when temperatures are warmer during the dry season. Altitude sickness is rarely an issue.

Bring flashlights and extra camera batteries; there will be no opportunity to charge equipment on the mountains.

Most booking agents or tour companies in Gondar will be happy to include transportation to the park as part of an all-inclusive climbing package, especially if you insist. It is possible to take a bus from Gondar to Debarq for about $3, but the roads are poor and breakdowns are frequent, so consider hiring a private driver through your hotel. The journey will take between two hours and four hours.

Park admission fees will be included in your climbing package, but bring at least 1,000 birr ($60) in cash – 50 birr for your coffee ceremony hosts in Geech, between 100 and 200 birr for souvenirs and the remainder for tipping your guide, scout, cooks and porters.

It’s up to you how long and how high you want to climb, but most packages range from three-day hikes to Chennek Camp (about 3,620 metres above sea level) to week-long treks up to Ras Dashen, the highest mountain in Ethiopia (about 4,550 metres above sea level). I found the three-night, four-day package to be the best value for money, which includes most of the best views of in the park (Tiya Afat, Jinbar Waterfall, Imet Gogo Summit and Mount Bwahit).