With his trigger finger hovering over a small transmitter, a young assailant awaits his victim. A dozen pairs of eyes watch in anticipation from behind potted plants, chair cushions and heavy window curtains.

In the shadows of the massive stone spiral staircase of the fortified 500-year-old Hotel Dolonne in the Italian Alps, he readies to fire when loud Russian accents fill the small lobby below - his victims have arrived. He launches a powerful invisible electronic signal, a second and third following in rapid succession.

The injured party is visibly shocked, a grin stretches across the assailant's face and the lobby breaks out into a cacophony of laughter and a blur of children scattering in all directions like a scene from Lord of the Flies . The lesson: When 13 families - including 22 kids aged 6 to 16 - head overseas for a ski vacation, a wireless fart machine is a source of endless entertainment.

Our group of siblings, cousins and friends had travelled to the Aosta Valley, near the tri-border of Italy, France and Switzerland, for the March break - 50 of us, from Ontario, British Columbia, the United States, Britain, and even a granny the Queen's age who flew in from the West Indies. Though organizing the trip had a few challenges, none proved too daunting. We had agreed to meet at the hotel bar in a little medieval stone village and, miraculously, everyone made it.

As the rental cars entered the hotel's cobblestone "street," wide enough to allow a roomy several centimetres of space beyond each side-view mirror, the children practically jumped through the vehicles' windows to join others who had already arrived.

And as on any group ski trip, it felt like that was the last we saw of them. Camp games won out over the one GameBoy in the group.

Although I thought we had booked the entire hotel for our entire holiday, three rooms still occasionally housed other guests. But the Children of the Corn helped ensure that newcomers' stays were short. Choosing half-board (breakfast and dinner included) meant no restaurant reservations, no splitting the bill, the occasional food fight followed by a conga-line through the kitchen and, most important, bring-your-own-wine-to-the-table rules.

The best-known ski area in the Aosta Valley, Courmayeur sits beside Europe's highest peak, the 4,810-metre Monte Bianco (Mont Blanc when you're on the French side). Like most visitors to the area, our family had flown into the world's handiest international airport, Geneva, and spent a spectacular week in Switzerland before a lovely Alfa Romeo test drive over the St. Bernard Pass to join the crowd. (A direct shuttle from Geneva to Courmayeur takes less than an hour and a half.)

Three-star accommodation in Italy isn't on par with three-star in Switzerland, and one shouldn't compare ski lifts (or public toilets, for that matter), but it's all part of a European experience - which in turn shouldn't be compared with a new world ski holiday. Food from our little stone castle's kitchen was plentiful, but not gourmet - in other words, perfect for family tastes, and affordable too.

Across a tight valley from the busier Courmayeur is the quiet, ancient village of Dolonne, about a 15-minute hike away (longer if you're enjoying the company of the mostly British skiers and footie fans at the Bar Roma; significantly longer if you leave at 2 a.m. by yourself and get north and south mixed up; and even longer yet if you run into five local wise guys and engage in fisticuffs before racing back to the hotel).

In any event, a much shorter stroll from the hotel takes skiers and boarders to a new gondola that lets you avoid morning lineups at the main cable car in the town of Courmayeur. Most visitors will ski the local mountain for the week, but our group was adventurous and decided a week there would require much longer lunch hours than our pocketbooks could endure. Then again, with 12-degree temperatures mid-mountain, midday, and an entire week without a cloud, most of us were happiest picnicking in a sunny snowbank with bread, cheeses and sliced meats, watching our children in snowball fights.

Our flock was a varied one, and included a UFC fighter, an author, a brain surgeon, a rocket scientist and a court translator. By week's end, we were all thoroughly confused with names, but we shared one thing: curiosity.

Because the Italian ski area Rosierre (connected to the equally enormous La Thuile on the French side) was only a 15-minute drive away, everyone was up for trying a different ski area each day.

Given the varying skier levels and ages - and the sheer size of the group - it was difficult to stick together with all the alpine distractions, but somehow we regrouped as the day went on.

Flat wide-groomed runs like golf courses one minute were followed by dozens of pairs of skis peering forebodingly over the lip of what Guy, a Whistler regular, named "Sphincter says No!" Only four of us ventured down that daunting steep and gnarly face, but we were rewarded with surprisingly light and deep powder, enough to ensure a lasting memory.

During our day in Chamonix, about a half-hour drive away through the Mont Blanc tunnel, we discovered it was warm enough to enjoy oysters outdoors at après-ski in thongs - or, rather, flip-flops, as the cool kids gleefully corrected my old-school vernacular. Given we'd arrived at Grand Montets, one of Cham's three ski areas, on what was apparently the well-celebrated "Drunken British University Students Day," I still thought "thong" was appropriate.

Between keeping my children from being urinated on in the lift-pass queue by a man in a panda suit to watching what looked like a series of spinal-cord injuries at an amateur bumps and jumps competition, there was plenty to talk about at dinner that night.

A little after 9 a.m. the next day, we pulled into the gondola parking lot at Pila, a ski area in the city of Aosta, the thermometer already reading 14 degrees.

Part of the group chose to explore some of the best examples of Roman architecture outside Rome, while others prepared for a spa and shopping day. For those still in ski boots, the impressive new multimillion-euro gondola took us from the city, over the valley's main highway and up into another wintry world above alpine. No British university students or EasyJet tour groups there; indeed, we seemed to be the only visitors from away - which was lovely.

From there, the gang pushed on to Cervinia, which shares the Matterhorn with the massive Swiss resort Zermatt. Not part of the Aosta Valley, Cervinia is still relatively close to Courmayeur and proved a sound choice for our final day.

Maybe it was memories of flip-flops or the continual sunscreen application, but we'd become quite complacent about mountain weather over the week. Even the most seasoned weren't prepared for such a sudden shift in temperatures. Another sunny day fooled us into thinking it would warm up like every other, but it got only as warm as Tremblant in January. With the children in light jackets and spring gloves, most were reduced to tears on the first windy trip up into the alpine. It was all we could do to schuss them to a warm rifugio and stuff their tummies with octopus salad, warm polenta and gnocchi gnudi .

Ultimately, it was just more material for the final evening's awards banquet.

GETTING THERE
Air Canada and Swiss International fly nonstop to Geneva.

WHERE TO STAY
Hotel Dolonne: One week half-board $560, including daily breakfast and supper. (Note: Our children won't be there this year.)

LIFT PASSES
There are several options: multiday at individual ski areas, and multi-resort passes for Aosta Valley for Italy, France and Switzerland. If you're skiing at big names like Courmayeur and Verbier, a multiday pass makes sense. Single-day tickets are the most flexible and affordable at less-popular resorts. In general, lifts in the Alps are about half the price of lifts in North America.

WHERE TO START
Courmayeur is the starting point of the Italian route of the Vallée Blanche, an all-day, guided, intermediate off-piste route that winds up in Chamonix. 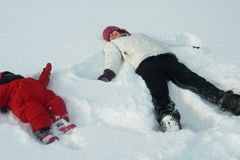 Skiing with a newborn isn't an impossible dream
March 10, 2007 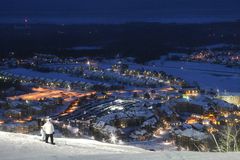