Peering down from my hotel room at the midday crowds hustling along Queen's Road East in the heart of Hong Kong, I wondered: Where are all those people going for lunch?

Let me explain. I'm a traveller who prides himself on eschewing tourist sites. I want to try what the locals do on a day-to-day basis, and I've done so in 84 countries (and counting). I seek that elusive travel experience that goes by a now-overused word: authenticity. So I decided that eating alongside the island's masses of busy workers would be one of my goals for the day. After all, I'd already joined the river of humanity that flows at rush hour here, boarding the famous Star Ferry, passing wooden junks and crashing through the grey waters of Victoria Harbour to Kowloon, where I delved deep into the bowels of the infamous Chungking "Mansions," riding the building's terrifyingly rickety elevators. So, I thought smugly to myself, I can handle lunch.

Asking the friendly fellow at the front desk for a lunch spot he initially, predictably, directed me to their own restaurant (no way), then a nearby food court (not an option). He then, reluctantly, suggested a place nearby – a sort of food hall that packs in the people by the dozens, even hundreds, at noon. Perfect.

I proceeded down the road to a sort of dual-purpose office and mall complex, following his directions and a flowing mass of tense office workers up to the fourth floor, where I found a gigantic room filled with round tables, almost all of them occupied. I did not see a single tourist in the place. Strange sea creatures swam in a line of industrial-sized fish tanks. Cheap polyester tablecloths and paper napkins covered the tables, and the whole place felt like a low-rent banquet hall. "Eureka!," I said to myself.

Someone presented me with a sheet of laminated paper covered in Cantonese characters. A server, run off her feet, helped me a bit as she passed, barely slowing down as she gestured to general areas on the menu while saying, "fish," "chicken," "beef." I was faced with more than 100 options, each one of them numbered. So I took a wild stab at it, waving down the server, gathering my courage, and ordering No. 47.

It did not go well. A few minutes later the same server placed a dish in front of me that was completely unrecognizable to my Western eyes. At first glance, it appeared to be a plate of sliced eels, swimming in a sea of noodles. Always game, I gave it a try.

The chopsticks were a problem. At the best of times, I'm a serious amateur – I'm always the guy who tries a few stabs, shrugs with a sheepish smile, then moves quickly to the fork. Here, that was not an option. Dollops of food soon covered parts of the white tablecloth, and the harder I tried, the worse it got. Other diners leaving and entering the restaurant shot me looks as they passed my table, which was handily located by the door. The restaurant's elderly, gentlemanly maître d' took mercy on me, first demonstrating the proper method, then, when that didn't work, actually taking my hand in his own and using his fingers to manipulate mine and, through them, the sticks.

I never caught on. My smugness now a distant memory, I quietly paid my bill and left, still hungry, heading directly back to my hotel. Having had my fill of authenticity, I sought to fill my stomach with that enemy of adventure: room service. 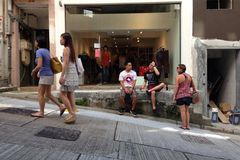 How to find the underground gem in Hong Kong’s cocktail crown
August 5, 2013 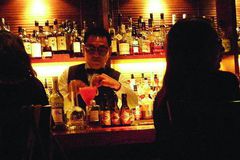 Sometimes ‘authentic’ Hong Kong eating can be a little too real
August 5, 2013 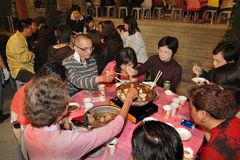 9 places to shop on Hong Kong’s styling Star Street
August 5, 2013
Follow us on Twitter @globeandmail Opens in a new window
Report an error Editorial code of conduct
Due to technical reasons, we have temporarily removed commenting from our articles. We hope to have this fixed soon. Thank you for your patience. If you are looking to give feedback on our new site, please send it along to feedback@globeandmail.com. If you want to write a letter to the editor, please forward to letters@globeandmail.com.
Comments