There wasn't a green beer in sight. What we were experiencing – by way of that lovely thing called travel serendipity – was an authentic St. Patrick's Day in Ireland, one enjoyed for the locals, not concocted for the tourists.

We had come from Cork, in southern Ireland, where my eldest son is in medical school, having escaped to the Ring of Kerry, one of several large peninsulas that jut out into the Atlantic in the southwest of Ireland. We wanted to avoid the party chaos of St. Paddy's Day. Cork is not as raucous as Dublin on the national holiday, but the festivities are still more about tourist entertainment than about local celebration. The one "tradition" the real Irish keep alive in Cork is to party hard the night before St. Paddy's Day so they can sleep off their hangovers during the next day's holiday from work. (I learned this from Irish medical students.)

But mostly, the Irish take off to go home to their small towns to celebrate with friends and family. Dublin, especially, is abandoned for the many foreigners who fly into town in search of what they think will be the real deal. The famous, cobblestoned Temple Bar area is wall-to-wall Americans, Italians, French and British. The celebrations go on for days to cash in on the tourist business. And yes, they serve green beer.

Which is not to say that Irish pubs, crowded with all manner of nationalities, aren't fun. Having a pint of Guinness "crowd-surfed" over to you, from the hands of one patron to the next, from the lip of the bar, where your clever friend has managed to swim through the sea of humanity to place an order, to you, perched on that coveted stool in the back corner, has to be one of the fine traditions of pub life here. That, and getting in early enough to bag the "snug," a tiny, semi-private space with table and benches at the side of the bar area. In Cork, my favourite pub is Mutton Lane Inn, situated down a narrow alleyway in the centre of town. You would never find it unless you went with someone who knows it – or asked for directions from a local. Small and intimate, it feels like a scene out of a novel: the craggy faces of locals barely illuminated by candle light; pictures and memorabilia on the walls; cigarette smokers in the alleyway seated on beer kegs.

In every city or town, there's a parade, and that – happily – is what stopped us on the road just outside Glenbeigh, a small town on the north shore, past Killorglin, the gateway to the Ring. We had negotiated the narrow roads – no such thing as big highways in most of Ireland – from Cork to the Ring of Kerry, about a two-hour drive, passing through the lovely town of Killarney and past the Gap of Dunloe, a stunning landscape of rugged, low mountains. Our destination was a beautiful hideaway of an inn called the Carrig Country House, built as a hunting lodge in 1850, on the shores of Caragh Lake, a few kilometres inland from the seashore near Killorglin.

We had dropped our bags there and checked in, an event in Ireland which always involves a cup of tea with some biscuits from the innkeepers. Frank Slattery, owner with his wife, Mary, immediately pulled out maps and books to help us plan our St. Patrick's Day with a drive along the scenic coast before returning for a gourmet meal that night. Go down the coast to Waterville, he suggested. If it's clear, you'll see the mystical Skellig Islands, two small, steep rocky outcrops about 13 kilometres from the tip, inhabited by Irish monks about 1,500 years ago and now a UNESCO World Heritage site and home to a thriving gannet and puffin population.

That planned itinerary is how we found ourselves stuck in a halted line of cars on the edge of Glenbeigh. It was about noon, and a small parade was going through the main street of the community, population 280. "I don't want to just sit here," my partner said. "Let's park and join in." We drove up on the verge of the road, parked in the mud, and walked into town.

Homemade banners from local football clubs were strung along the street front. The flatbeds of trucks carried locals dressed in a variety of costumes, from Bart Simpson to members of the Royal Family. On the sidelines, the whole community, young and old, had come out to watch. We stood for while watching and then retired to one of the pubs. We were among the first few to come inside on the clear, warm day. An older woman sat near the small fire, nodding her head in greeting to us when we ordered our pints of creamy Guinness and found a comfortable corner.

Within the next 10 minutes, a stream of people came through the doors, and suddenly we were in the bosom of the community. A family of young children sat next to us. They had four children under the age of six, the youngest a babe in arms, the toddlers scrambling up into chairs. Immediately, the parents struck up a conversation. More children poured in, dressed in costumes, their faces painted. Two middle-aged men tried to waddle through the narrow pub door to much hilarity. They were dressed as big, fat Sumo wrestlers.

I suddenly felt that we were inside a movie or in a dream, that we had been magically transported here somehow, because we didn't really belong. We hadn't even signed up to be an extra. We had just landed in the heart of Irish life. This is what real pub life is about – not tourists quaffing back green beer with other foreigners taking in the quaint atmosphere; just locals gathering in a community space that has been the same for hundreds of years.

We didn't want to leave, but if we wanted to stick to our plan (and drive competently), we had to go after an hour – and one beer each. A thin, gossamer veil of fog clung to the steep slope of land at every bend in the road. The rugged nature of the land, rocky and austere, subdued the drama of the sea, meekly lapping at its edges. When we reached the western tip, we could see the Skelligs shimmering off in the distance, implausible almost as a fantasy Disney castle.

Driving up through the mountains through the centre of the Ring, rather than going on the longer and touristy route along the southern shore, was equally beautiful – like a moonscape in some places, the road more of a cow path up over the edges of hills and through a remote grassland, the sunshine playing across the land in a shifting painting of light and dark. When we arrived back at Carrig Country House, we were glad we made it – you wouldn't want to get a flat tire in those remote parts and when we did see signs of life in the form of an occasional house, we had to stop for directions. There weren't even many signs. We had just enough time before dinner for a scotch in our room overlooking Caragh Lake, a forlorn landscape with no other sign of human life on its shores, as the sun set, bathing the sky a warm red.

Dressed elegantly for dinner, we were back in the communal St. Paddy's Day spirit, eating a gourmet dinner in the gracious, fully-booked dining room, entertained by a local fiddler and piano player. The best thing of all? We were the only foreigners, once again. 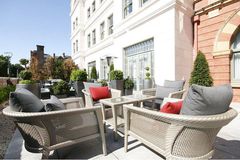 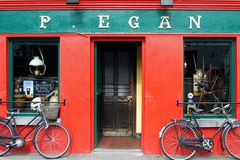