"Hear O people! Look at my pain. My girls and my young men have been deported (Lamentations 1-18)," says the inscription on the wall of the Jewish school on Via del Tempio, in Rome's Ghetto Ebraico. The plaque is dedicated "In perpetual memory of the 112 students of these schools exterminated in Nazi death camps."

Despite the gravity of this, and other stark reminders of the Holocaust here, Via Portico d'Ottavia, the Jewish quarter's principal artery, is a lively thoroughfare today, stirring to life from a deep slumber one summer evening.

Where only an hour earlier, the streets had been placid, with a tinge of melancholy, now tourists and Romans of all ages and persuasions fill the restaurant terraces that spill out onto the pedestrian street. At restaurants such as Ba'Ghetto Milky and Ristorante Il Portico, patrons sip Aperol spritzes and goblets of Israeli wine and munch on appetizers of stuffed zucchini flowers, babaghanoush and the famous carciofi alla giudia, artichokes deep-fried, Roman Jewish style.

Dating back to 161 BC, Rome's Jewish community is the oldest in Europe. The formation of the Ghetto harks back to AD 1555 – not to the Second World War, as some believe – when Pope Paul IV decreed that all Jews must be segregated into their own quarters, or ghettos, a word which comes from Italy's first Jewish ghetto, in Venice. In Rome's Ghetto, more than 4,700 Jews co-existed in pestilence and poverty, crammed cheek by jowl into only seven acres in the Sant'Angelo district of the city. Indeed, it was because the Ghetto was so small that residents were forced to build upwards, creating, in effect, the world's first high rises.

During the unification of Italy in 1870, the new monarchy emancipated the Jews, tearing down the wall surrounding the Ghetto and, in agreement with the Jewish community, demolishing the abominable tenement houses, perceived as a symbol of shame. Wealthier residents moved away to nearby neighbourhoods and new, more elegant apartment houses were built to house those who stayed behind.

But Rome's Jewish residents were not immune to the troubles of the 20th century. During the Second World War, the Nazis occupied Rome from September, 1943, to June, 1944. On Oct. 16, 1943, the Nazis rounded up and deported approximately 2,000 Jews from the Jewish quarter and surrounding areas – vittime dell'infame odio di razza, victims of despicable racial hatred, as it is described on a large stone plaque on a wall by the remnants of the crumbling Portico di Ottavia, now two millennia old.

Professor Claudio Procaccia, former head of Rome's Jewish Museum, told me how, during the Nazi Occupation, his mother's family fled to the countryside, where they found refuge with farming families and in properties owned by the Vatican.

"Unfortunately, a part of our family made the mistake of returning to Rome on Oct. 15, 1943, on the eve of the first raid," he says. "On Oct. 16, my mother's aunt and her two children were also deported and none of them came back from Auschwitz. For my mother, it was a heartbreak she never got over."

The Jewish Museum of Rome, housed in the basement of the Ghetto's spectacular Great Synagogue, documents the history of the Jews in Rome and of daily life in the Ghetto, including photos and documents from the German occupation. Among these is an exhibit of receipts given to both Jews and non-Jews who gave gold to the Germans, in accordance with an agreement that the Jewish community would not be disturbed if it handed over 50 kilograms of gold to the Nazis.

Built between 1901 and 1904, the Tempio Maggiore is unlike any other synagogue I've ever seen. Meant to inspire awe, this fin de siècle wonder was designed in an eclectic style with Greek and Babylonian motifs. The building is magnificent from the exterior as well, particularly with its aluminum squared dome, the only one in Rome. The eye-catching design was an intentional choice, one made by a community wishing to celebrate and proclaim its new-found freedom and pride.

I ponder all this as I sit savouring a plate of carciofo alla giudia at Nonna Betta, the tastiest, moistest and most delicious artichoke I've ever had the pleasure of eating. As I eat, a Torontonian and his Roman friend sit opposite me ordering aperitivi. A small group of young priests, a few dressed in robes, strides by, deep in animated conversation. Tables are beginning to fill up next door at Da Giggetto and across the street at Ba'Ghetto.

Having so enjoyed my visit to the the Jewish quarter, I return a few evenings later and explore a few of the back streets I hadn't seen before, taking the time to stroll through the crumbling ruins of the Teatro di Marcello and the ancient Portico di Ottavia, which is currently being restored. By 7:30 p.m., the main strip is abuzz. I'm drawn into the Cremeria Romana for homemade, dairy-free pear and lemon kosher gelato made with all-natural products. It's exactly the right texture, creamy and chewy, just like gelato, but not as sweet.

Marlen, the owner, tells me her grandparents immigrated here from Libya in 1967. She herself does not live in the Ghetto since it's too expensive. Neither do most of the area's restaurant owners and shopkeepers, for the same reason. "People didn't live here for a long time because most of the places didn't have bathrooms. Now it's very trendy, but it's mostly Italians with money."

When I ask her when this area became the dernier cri, she says, "Four years ago there weren't any restaurants here. This is new. It's very fashionable now. Italians love it down here."

Yet the Ghetto's popularity among Italians has come a price. As Prof. Procaccia points out, the gentrification of Rome's historical centre, beginning in the late 1980s, drove out many of Sant'Angelo's less privileged families, significantly reducing the Jewish presence in the area and radically altering its social and commercial fabric. Increasingly, Roman Jews come here from outside the area to work, go to school and celebrate Shabbat.

For this reason, the historical and educational work of the Jewish Museum is more vital than ever to the survival of the community. Says Prof. Procaccia: "For the Jewish community in Rome, the museum is a place of great prestige and of reinforcement of our identity."

Open Sunday to Friday; closed Saturdays and Jewish holidays. Hours vary depending on the season. General admission: €11 (includes entrance to the museum and a guided tour of the Great Synagogue and the Spanish Synagogue). The impressive collections include Roman silverware from the 17th and 18th centuries, sumptuous textiles and embroidered robes from all over Europe, antique marble sculptures and engravings and illuminated manuscripts.

Like most restaurants in the Ghetto, Grandma Betta's is kosher. Thus, this cozy venue offers two menus – one for meat and one for dairy. Alongside the Roman Jewish classics taken from his grandmother's repertoire, owner and former copywriter Umberto Pavoncello also serves Jewish cuisine imported from Lybia. Of course, you can't go here without trying the carciofi alla giudia, which was given celebrity chef Anthony Bourdain's stamp of approval when he filmed here for his food travel show, Parts Unknown. Also worth trying is concia, Roman Jewish-style marinated zucchini, and spaghetti all'amatriciana.

This is the dairy edition of Ba'Ghetto, owned by brothers Amit and Ilan Dabush, the sons of Jews from Tripoli. The Dabush brothers' North African, Middle Eastern and Italian roots are reflected in their menu, which includes specialties such as couscous and falafel as well as Roman Jewish dishes such as spaghetti with mullet roe and chicory. The other Ba'Ghetto is located further down the street at No. 57.

For 200 years, this tiny no-frills bakery has been rolling out traditional Roman Jewish classics such as almond biscotti, ricotta cake and "Jewish pizza," a burnt-looking sweet nut cake consisting of almonds, raisins and candied fruit. There is no sign, so it's easy to miss.

This charming little gelateria makes its own homemade gelato with all natural ingredients, both with and without milk. Owner Marlen's selection of milk gelati even includes halva flavour, as well as a mixed spice one. Almost all the milk flavours are also made without milk, but the milk-free selections include more fruit.

Have you seen the Versailles of ancient Rome?
March 27, 2015 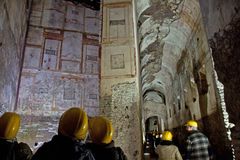 So, you've seen Rome, but have you been under it?
October 20, 2014
Rome hotel G-Rough offers refined luxury in heart of the Parione district
December 17, 2015
Follow us on Twitter @globeandmail Opens in a new window
Report an error Editorial code of conduct
Due to technical reasons, we have temporarily removed commenting from our articles. We hope to have this fixed soon. Thank you for your patience. If you are looking to give feedback on our new site, please send it along to feedback@globeandmail.com. If you want to write a letter to the editor, please forward to letters@globeandmail.com.
Comments