Ian Eakins draws a map with his finger on the dusty back window of his old Chevy Suburban. Here’s where most people go, he says: Vancouver, Whistler, Banff: the Golden Triangle. But beside it, in the east-central corner of British Columbia, is Wells Gray Provincial Park, all 5,200 square kilometres of mountains, alpine meadows and clear, deep lakes. Just waiting. 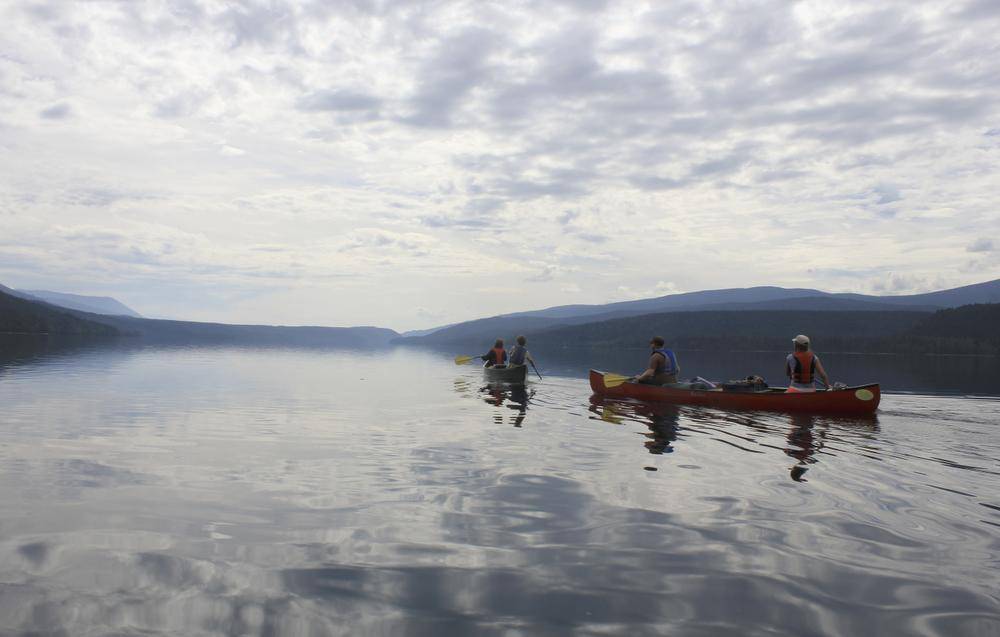 Canada is rich in brand-worthy parks: the Haida Gwaiis, the Kluanes, the Gros Mornes. Wells Gray just doesn’t get the same pop, despite being home to Helmcken Falls, with three times the drop of Niagara Falls. Or being the locale of Murtle Lake, North America’s largest canoe-only lake.

“What makes it a special place is the protection of the Clearwater River. It’s one of the most protected watersheds in the world.”

Eakins is lean, well travelled and constantly tossing out facts such as why the cedars are red-flagging (dry summer) or how bears like skunk cabbage.

He turns away from his car – where we’ve been signing trip waivers on the hood – and sweeps his hand south: All the roads and cities are that way; Prince George is 500 kilometres north. “Everything in the middle is wilderness,” he says.

So here I am, a couple of hours drive north of Kamloops, ready to push off in a canoe and find out whether it deserves to be more than just the park next door. 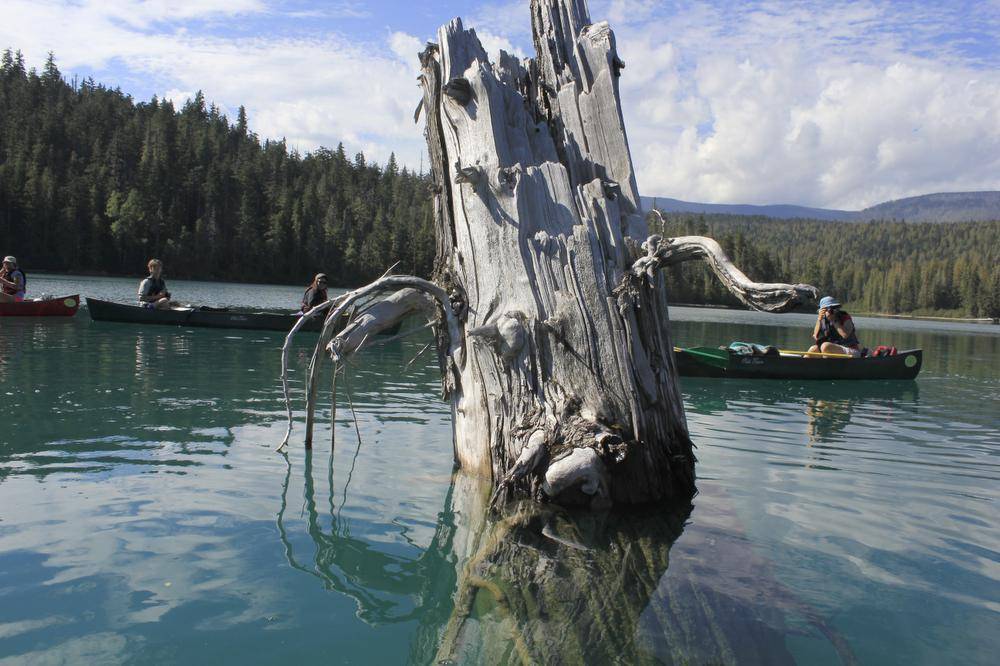 The water is so clear you can see the tree's great height disappear into the depths below. (Karan Smith)

The trip starts with us hitching a ride, canoes strapped to the roof of a jet boat. To save time, we’ll be putting the canoes in halfway between two connecting lakes – Azure and Clearwater – and then paddling back to the pickup point, about 70 kilometres from the town of Clearwater.

But first: an outing to Rainbow Falls. We motor across Azure Lake, slowing down to glimpse waterfall after waterfall, before pulling up to a dock. There are a handful of campers here on this gorgeous end-of-summer long weekend.

While the guides prepare lunch, I follow a forest path to see Rainbow Falls, encountering along the way a trappers’ cabin covered with roughly carved mementos left by those who J-stroked this far.

Back on the beach, I find it buzzing with dragonflies and painted lady butterflies. We eat pulled-beef sandwiches and drink coffee and linger away the afternoon hanging out, swimming, paddling. It seems like a magical place. 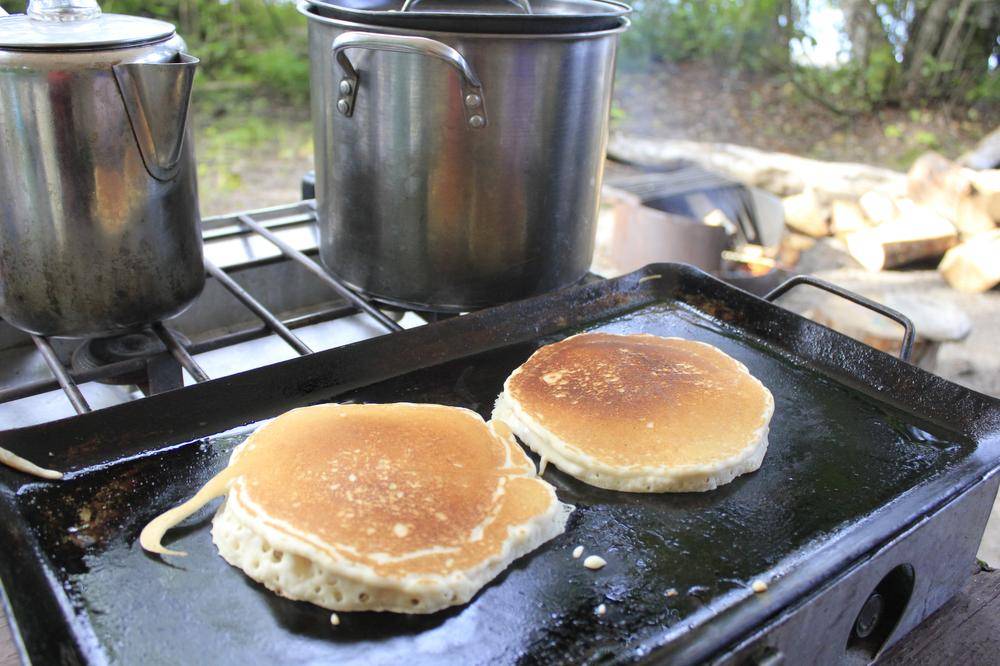 Breakfast is served on the beach. (Karan Smith)

By the time, however, we’re en route to our first campground, dark clouds have gathered and a storm drops hailstones the size of fish-tank rocks. It abates, luckily, as we unpack dry bags and set up tents. That night, after spaghetti, kale salad and B.C. wine cooled in the lake, the trip starts to feel a bit like a family outing. Among our number are travellers from Australia and South Korea, but also Eakins’s partner, Tay Briggs, and their three long-legged teens who have joined us to balance out canoes and gear. This is a family business and I start to feel like a favourite niece; at least one that doesn’t work as hard or paddle half as well as their 14-year-old.

The next morning, after a route debriefing drawn in the sand, I find myself paddling toward what looks like a totem pole jutting out of Azure Lake. Its bark has worn grey and smooth, its branches are just stubs, and it’s lodged upright. The water is so clear that I can see its great height disappearing into the depths below. It feels like paddling in a work of art.

Throughout the day, loons dive and call out, and osprey float overhead. The weather is perfect and the still, smooth waters mirror the clouds and mountains. I take endless photos with no – audible – complaints from Eakins, who steers my canoe. 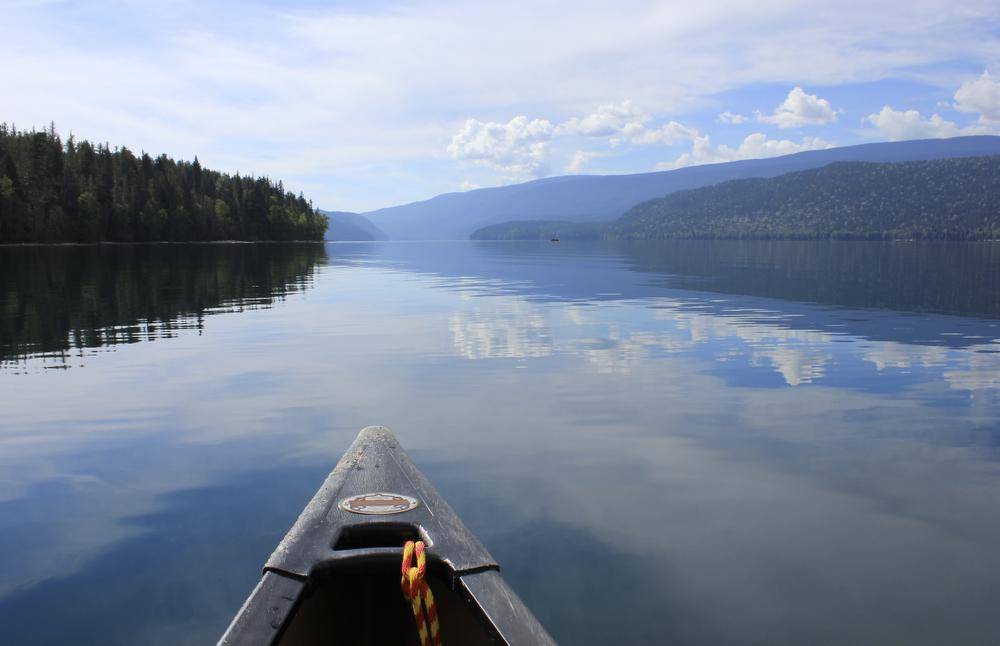 After hours of unhurried paddling, we pull up to a sandy point that is Huckleberry campground. It’s early afternoon and there’s a debate on whether to continue to a site closer to the final dock. I’m happy we stay. We’re the only ones here.

“A lot of Wells Gray marks the edge of ancient North America,” say Briggs, an amateur botanist and forester by training, as she readies coal briquettes to roast chicken. “Though what makes Wells Gray famous is because of the massive amounts of lava that came down – so much molten history.”

Its volcanic back story is behind both its preservation and its application to become a UNESCO World Heritage Site. When a land surveyor came across Helmcken Falls – a stunning site I see later, where the Murtle River shoots off a cliff into a volcanic bowl – the discovery led to the creation of the park. That was in 1939. “And somebody had the foresight to protect the whole watershed,” says Briggs. “It was either dead luck or incredible foresight.” 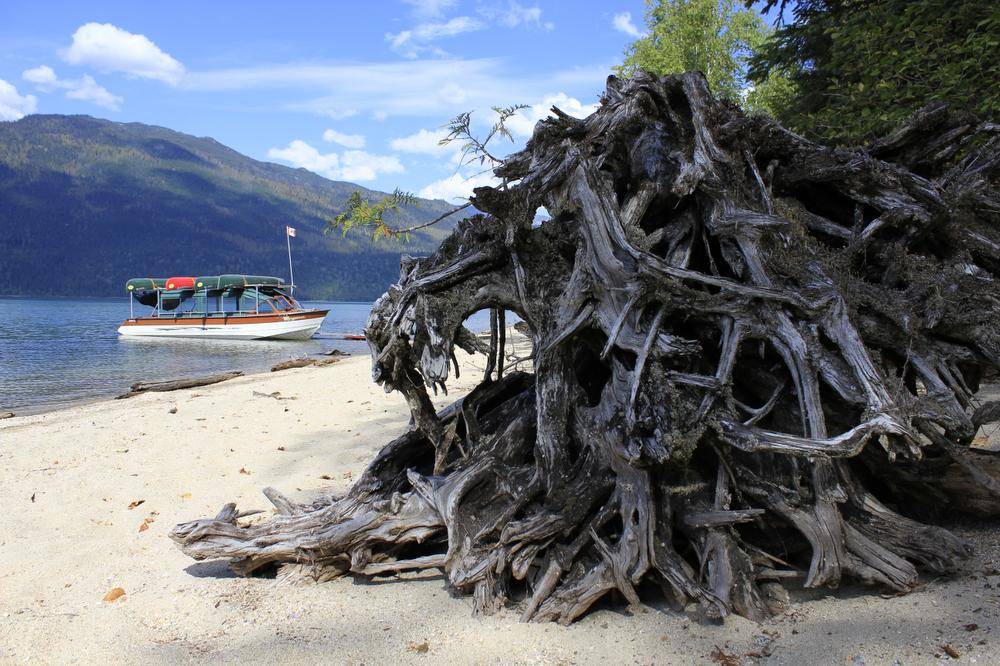 On that last afternoon at Huckleberry I settle in front of a beached, almost sculptural log. A dragonfly buzzes its length, poking into nooks. Minnows skirt about. I can hear the chopping of wood and laughter. The mountains stretch before me. My watch is off. There’s no WiFi. I’ve been barefoot since we pulled in.

Later, after dinner, a raucous card game of cheat ensues with the kids. Before climbing into the tent, I sit on the sand again, staring at the immense starry sky, not a man-made light on any shore. And I realize why Wells Gray is such a secret, and how more such places must be hidden in the wild corners of this country – because once you discover it, you want to keep it that way, too.

Guided trips are a good way to go. A three-day canoe trip with Wells Gray Adventures starts at $460. Day trips, hut-to-hut hikes and canoe excursions are also available. For more information, visit the website at skihike.com.

The writer travelled as a guest of the Wells Gray Adventures, Thompson Okanagan Tourism and Canadian Tourism Commission. They did not review or approve the story.