Skip to main content
NIKKI BAYLEY
Special to The Globe and Mail
Published May 1, 2015

With its well-earned reputation of being home to some of Europe’s worst drivers, the thought of taking a bike ride around Paris may sound like a sure route to learning more about French emergency rooms. So it may come as a surprise to find that the City of Light is an overwhelmingly cyclist-friendly place.

There is no more memorable way to explore this gorgeous capital city than on two wheels, and the best way to do it as the way residents do it, using the popular Vélib’ bike-sharing program. Thanks to the municipally run program, which began in 2007 and now has about 20,000 bikes on the streets, Parisian motorists (even taxi drivers), cyclists and pedestrians happily co-exist.

Vélib’ makes sense for a day tourist – you can explore the city as you wish, and with little hassle. The bike stations are on every other corner, so you can take one, ride a while, then return it to another station while you explore a museum, historic district, go shopping or grab a café crème. 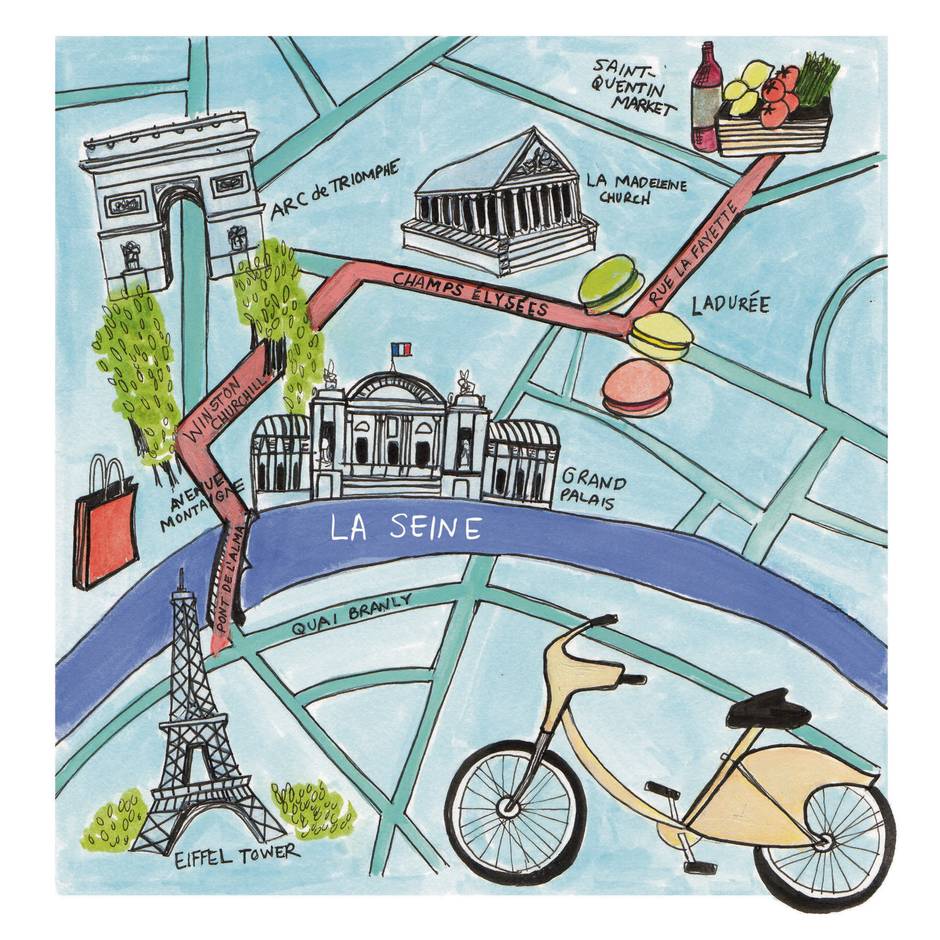 (Kristen Solecki for The Globe and Mail)

Here’s an easy, city-centre route that lets you pedal your way around most of the Parisian highlights in a leisurely day. You’ll see lots of fun, touristy sites and you can stop off at key points along the way.

The ride begins at the Eiffel Tower and ends at one of the city’s most popular local markets where you can enjoy zingingly fresh Vendée-Atlantic oysters and a glass of white wine.

Begin at the Vélib’ station on avenue Gustav Eiffel at the intersection of avenue Charles Floquet.

Cycle eastward along Quai Branly and cross the Seine River at Pont d’Alma, inaugurated by Napoleon III in 1856. Watch for the Flame of Liberty at the north end of the bridge, an unofficial memorial to Princess Diana who died after a car crash in the Pont d’Alma tunnel.

Turn right, and ride along the Cours Albert 1er, through an arrow-straight avenue of manicured trees. The Seine is on your right; to your left, a few streets over, is avenue Montaigne, where you’ll find designer stores, such as Louis Vuitton and Prada and, at No. 35, the Canadian embassy. 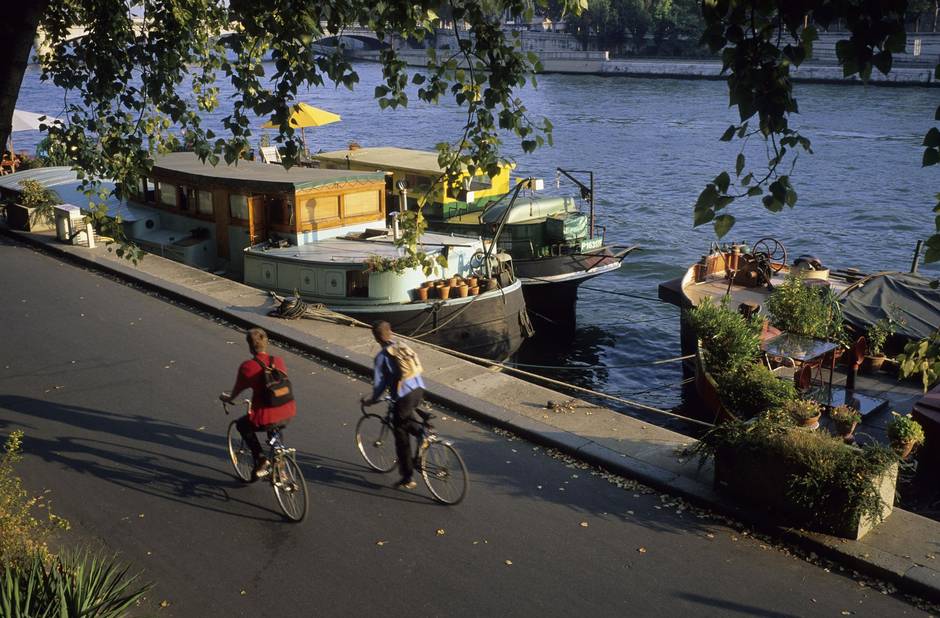 Turn left onto avenue Winston Churchill, which heads into the parkland around the Champs Élysées.

To the left, you’ll see the Beaux-arts designed Grand Palais and on the right the jewel-like Petit Palais. A right turn at the end of Winston Churchill brings you onto the Champs Élysées, with the Arc de Triomphe at the far left end and the towering Obelisk at the other end. There will be traffic on this broad avenue, but it is still an easy cycle; if you’re feeling nervy, there’s a shared bus/bike lane. Or stick to the park pathways that run both side of the Champs Élysées.

By now you may be ready for a treat, so visit the nearby Ladurée, the world-famous luxury macaron emporium (16-18 rue Royale). It’s also worth taking a look around the neo-classical interior of La Madeleine church, just a minute away at the end of the street.

Head east from the church on boulevard de Madeleine toward boulevard de Capucines and the Palais Garnier Opera house. Then pedal along rue la Fayette, and at the junction of boulevard Magenta take a right, to the covered Saint-Quentin market. This local market has been a favourite since 1866, and is the perfect spot for lunch (it’s closed on Mondays).

You can choose from Lebanese, African or Greek cuisine in little diners dotted around the market, or pick up superb ham, honey, cheeses and bread for a picnic. To feel like a true Parisian, pull up a stool at the Quai No. 85 fishmongers and enjoy a half-dozen oysters and an icy glass of muscadet, for about $10. There’s no better way to end your cycling adventure. 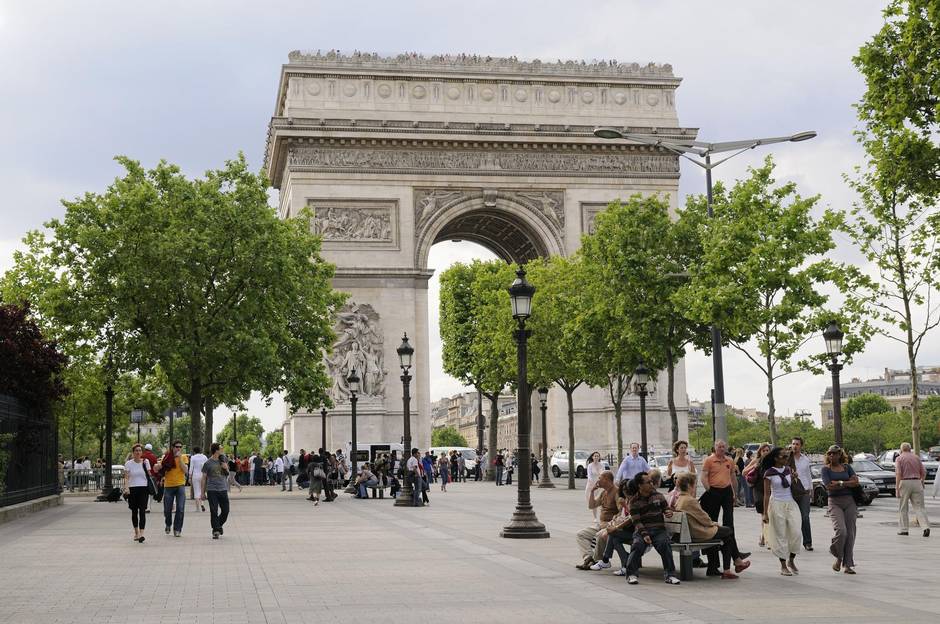 The Arc de Triomphe, at the top of the Avenue des Champs-Elysées. (Jean François Tripelon-Jarry/Atout France)