When has a 100th birthday ever felt so refreshing? Perched in the Berkeley hills overlooking San Francisco Bay, the Claremont Hotel Club and Spa celebrated its centenary with a top-to-bottom $47-million (U.S.) makeover. This white-clad debutante then relaunched as a newly branded Fairmont Hotel. 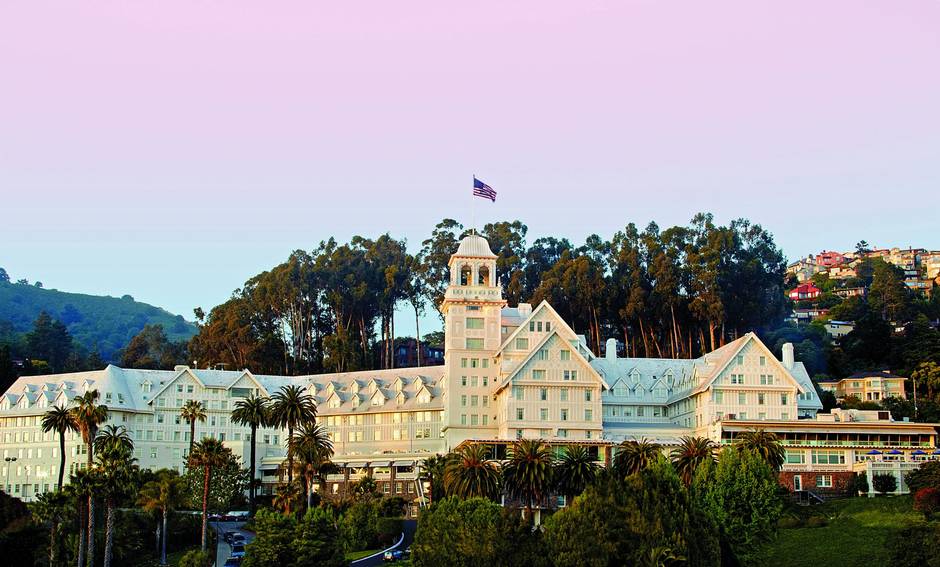 Located only 20 minutes from downtown San Francisco, the Claremont Hotel Club and Spa is ideal for vacationers looking for a luxury stay not far from city life. (VRX Studios)

Located on the border of Berkeley and Oakland, a 20-minute drive to downtown San Francisco, the Claremont’s location is ideal for travellers looking for a luxury retreat not too far from city life. On one side of the hotel: a sweeping view over the San Francisco skyline and Golden Gate Bridge. On the other: towering oaks and palm trees. In the middle: tennis courts and swimming pools. It’s rare to find such a scenic setting so close to an urban centre.

Guests can hike the nearby parks and hills, or take a short drive to check out the quirky Berkeley scene and Oakland’s new restaurants and bars. But many guests never leave the grounds, instead spending their visit lounging by the pool, in the spa, perhaps sipping cups at an Afternoon Tea, or curled up with a book in the cozy Hilary-Tenzing reading room. 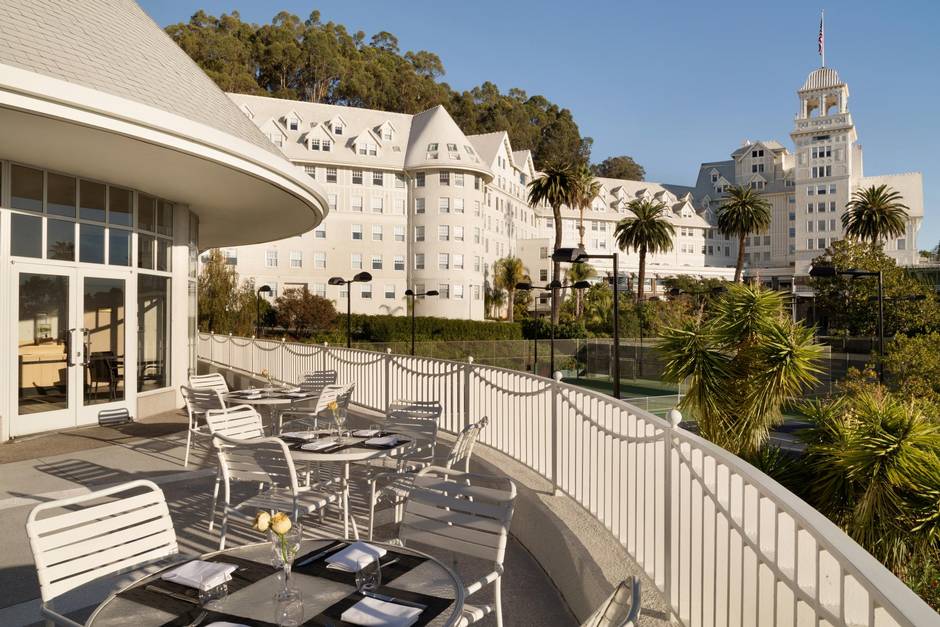 The massive remodelling created a bright, airy interior space, with panoramic picture windows across the lobby and restaurants. (VRX Studios)

While the Claremont’s exterior looks like an old-school doll house you’d find in the attic, this is definitely not your grandmother’s cottage. The massive remodelling created a bright, airy interior space, with panoramic picture windows across the lobby and restaurants. Newly arriving guests can’t help but drop their bags and migrate to the view. Given the hotel’s sprawling architectural footprint, each room has a unique layout, making it feel like a cross between a large luxury hotel and a stylish bed & breakfast. 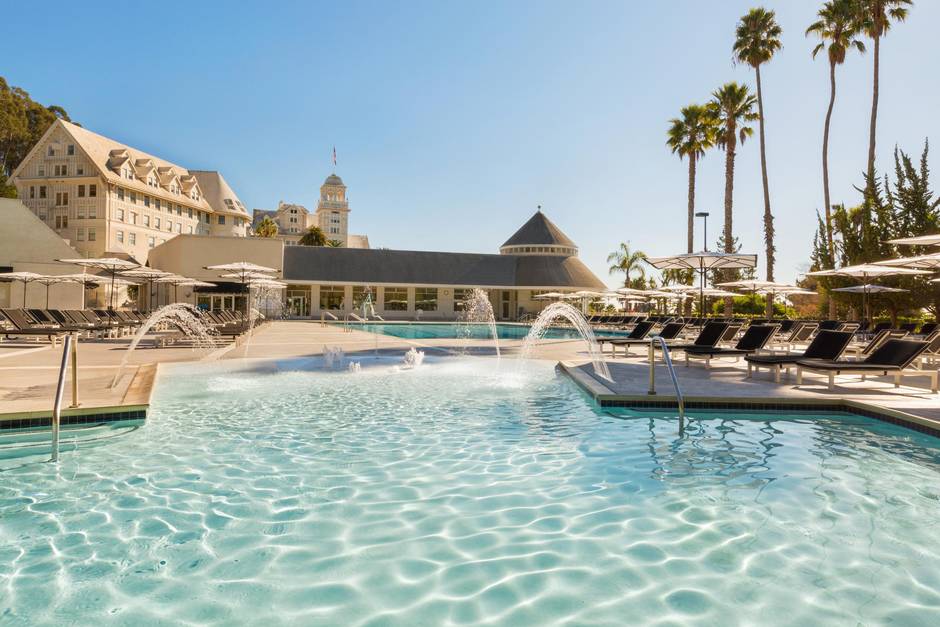 There’s nothing that drives me crazy more than luxury hotels tacking on a stealth “resort fee” ($26) to already premium rates. And then to charge another $30 a day for parking?! C’mon, Fairmont, be fair! Although it should be noted they at least don’t charge extra for wireless Internet or fitness-club access.

Even before the Claremont’s remodel, when the rooms and lobby were faded and dingy, I would stay here when in town for business just to use the fitness club. With the hotel’s four outdoor swimming pools, a full-service spa and beauty salon, this is truly a destination resort. But parents may vote for the included-with-the-room babysitting: three-hours of supervised play at the Claremont’s Kids Club. 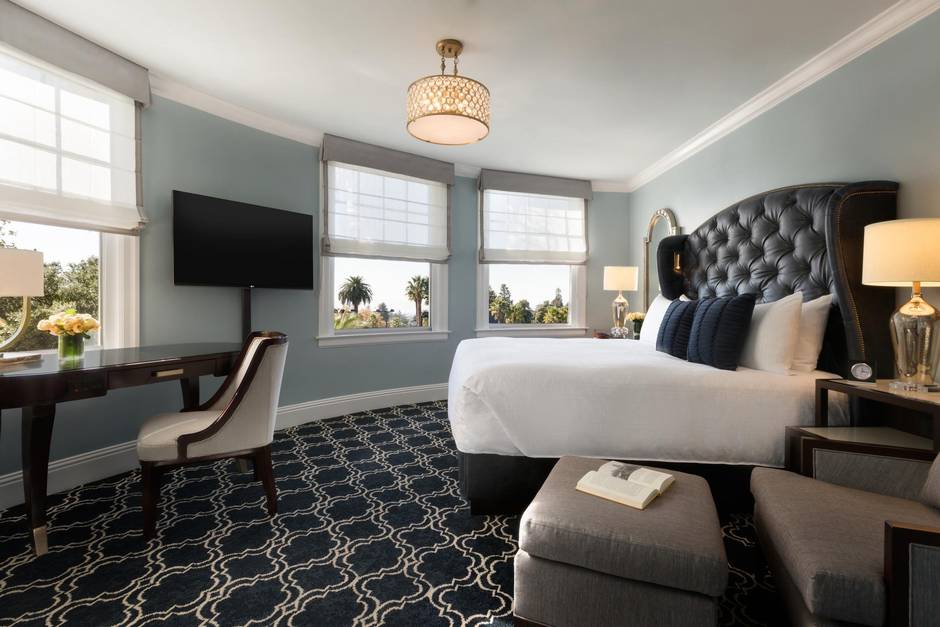 A guest room at the Claremont Hotel and Spa. (VRX Studios)

For $850 a night, guests can live like a king and queen in a castle by splurging for the Tower Suite, which comes with a stairway to a private deck with sweeping views of San Francisco Bay. 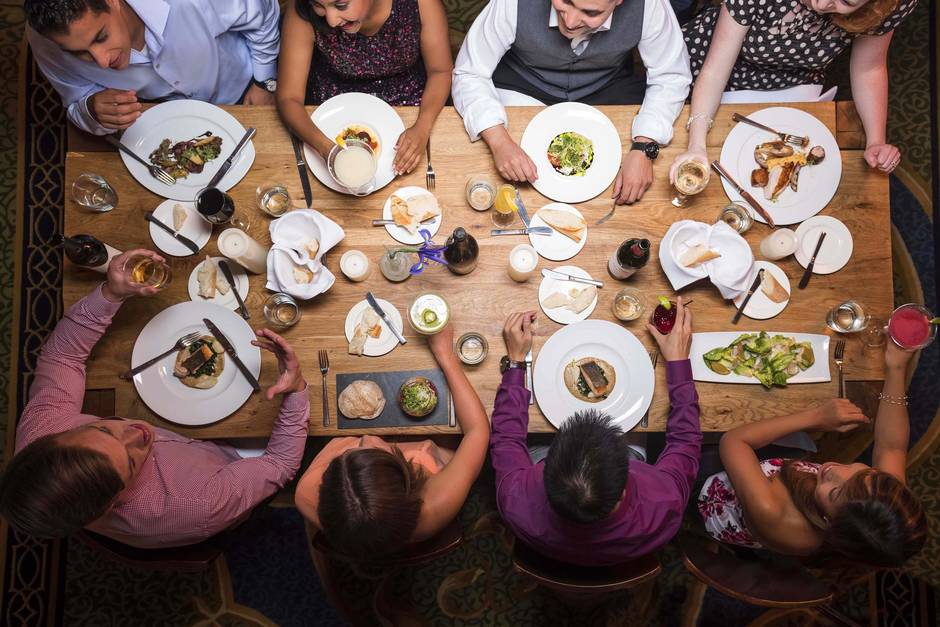 Dinner at the Claremont. (VRX Studios)

Hotel guests are split about evenly between families with kids on holiday, a few romantic couples, and business travelers looking for something a little different in their hotel. Plenty of local members come to use the fitness club and the Kids Club. 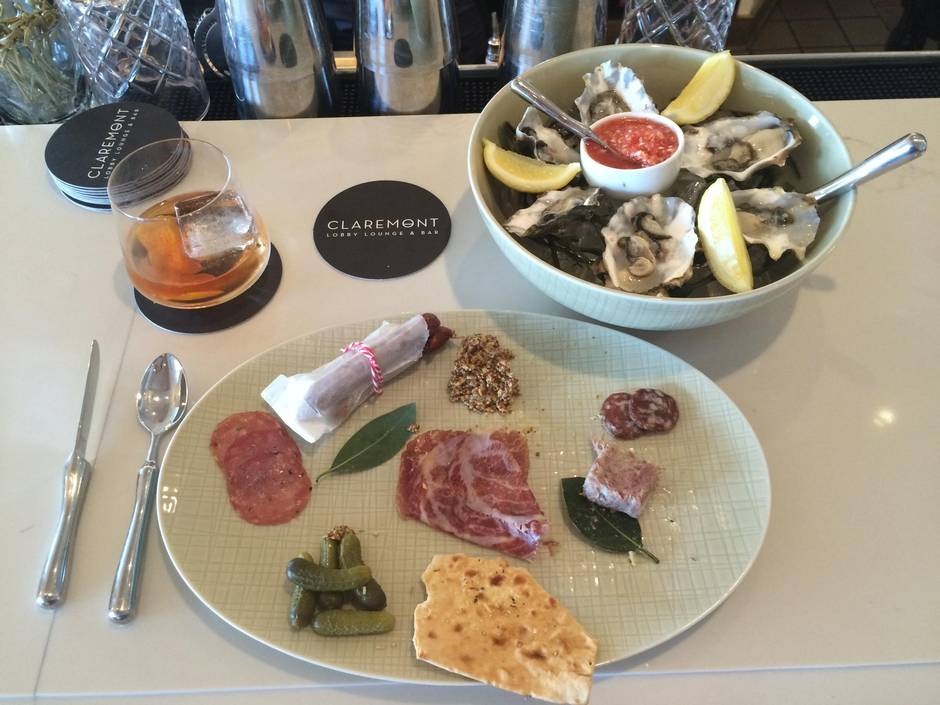 The author's meal of oysters, charcuterie and whisky at the Lobby Bar. (Bill Fink)

Eat in! The Claremont’s much-awarded Meritage Restaurant is introducing a new steakhouse menu, with a side of sustainably sourced seafood and an extensive wine list. I tried the excellent Niman Ranch filet with a side of local mushrooms.

The newly opened Antoinette Brasserie developed by Michelin-starred chef Dominique Crenn features seasonal French cuisine, including perhaps the tastiest French toast ever, a pain perdu with brown butter almonds and gooseberry jam that started my day with a smile.

Finish your evening at the Lobby Bar overlooking the lights of San Francisco with a smooth barrel-aged Manhattan cocktail and a side of oysters – that’ll have you feeling like Mad Men’s Don Draper in town to close a big deal.