Pedalling down Leon’s cobblestone streets at a considerable clip, my pedicab driver, Benjamin, starts singing romantic Spanish ballads to me. Apparently he’s got lungs as healthy as his calves, because I can barely sit straight on the seat as I slip around in my own sweat in the wilting Nicaraguan heat.

Benjamin’s got other talents, too. He was the only one of the swarm of pedicabs drivers at the dusty bus depot who had any idea of where my guesthouse might be (Nicaraguans eschew street addresses for directions such as “two and a half blocks past the Esso”). And he makes predictions. “Leon will be a dream for you. You will get a fiancée before you leave,” he tells me in a mix of English and Spanish. His prediction is wrong, unless he meant falling in love with a city.

With a population of less than 200,000, Nicaragua’s second-biggest city doesn’t have the economic and political clout of the ugly capital, Managua, nor the concentration of gentrified colonial hotels and trendy bars of its showier rival, Granada. But it has its own magic. Sure, the long-ago former capital has a constellation of historic churches scattered like Easter eggs around the city’s Spanish colonial grid, especially the stately 18th-century cathedral, which seems to have been built for a city 10 times the size. But it’s the wondrous assortment of people Leon attracts that make it one of those rare destinations where locals and travellers easily can meet and interact. The city plays host to university students, American expats, artists, NGO volunteers, fugitives from the law (I met a couple of them), former revolutionaries and backpackers making their way across Central America. 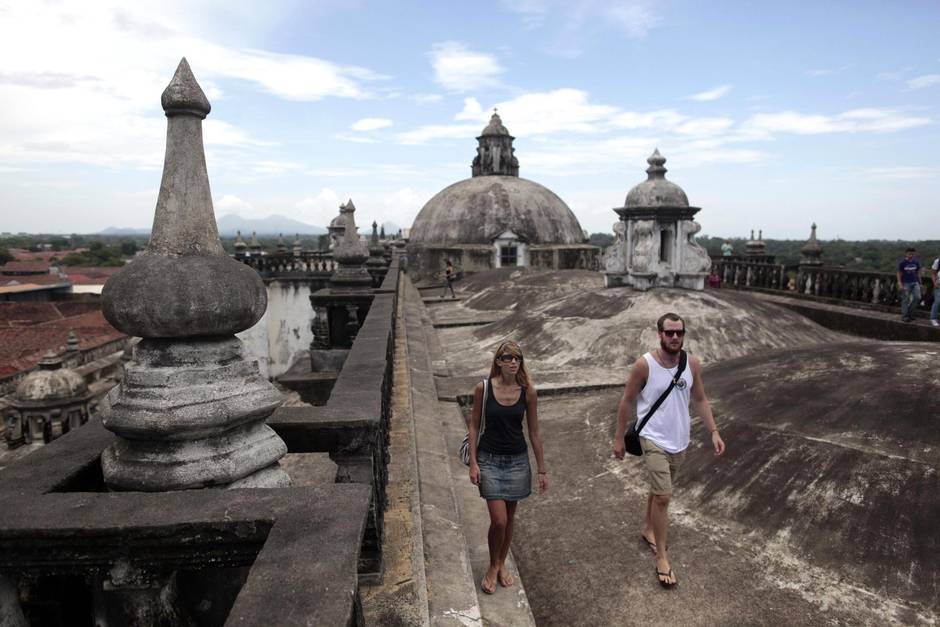 Visitors can walk atop the Leon Cathedral.(Esteban Felix/The Associated Press)

In the evening, locals cool off in their high-ceilinged front rooms, watching passersby and chatting up neighbours through the window. The narrow sidewalks, peppered with holes that must be dodged and smokers loitering outside bars, encourage random encounters. A short chat with Adoc, the handyman at my guesthouse, gets me an invitation to his friend’s place, where the host, who makes a living sewing robes and dresses for church statuary, serves a hearty soup of tripe, yucca and corn. The next day Adoc takes me to his barber.

Maybe it’s Leon’s leftist sensibilities that sweep aside social barriers. During the Nicaraguan revolution, the city was a Sandinista stronghold. While those violent decades are long past, the ramshackle Museum of the Revolution remains a hangout for veterans who give tours for tips. My guide, Ernesto, is a small man in his mid-50s, who must have been in his teens at the height of the insurrection in the late 1970s. He proudly points himself out in several of the black and white photos on display. There he is behind barricades across from what is now an ice cream parlour. There he is with a group of armed men standing in front of piles of rubble. Learning about his lived experience as a revolutionary fascinates me more than anything a curator could put together.

Though the Leon sun can be unrelenting, vast, surf-able Pacific beaches are not far away, and the back-and-forthing between city and coastline provides yet more ways to meet people. On the local bus to Las Penitas beach, a half hour or so through the dry countryside, I try practising my Spanish on whomever is sitting or standing next to me; school kids especially appreciate the opportunity to respond in English. One day I am walking to the beach bus depot when a taxi driver pulls over and offers me a ride for 30 cordobas, about $1.35. The 23-kilometre ride can cost as much as 200 cordobas ($9) so I am a little suspicious. “Thirty, thirty, fast, fast,” the driver calls out of the window. I can’t resist the bargain. The rusty car starts moving before I have even closed the door. For the next 12 minutes, anyone and anything on or near the road face the wrath of our horn. Oscar, the driver, had received a request from Italian tourists willing to pay $100 (U.S.) for a ride to Managua – several days’ income. Pragmatically, Oscar doesn’t want to drive empty. Emotionally, he wants someone to share his excitement with and he talks as fast as he drives until he drops me off, politely wasting a few seconds to shake my hand. 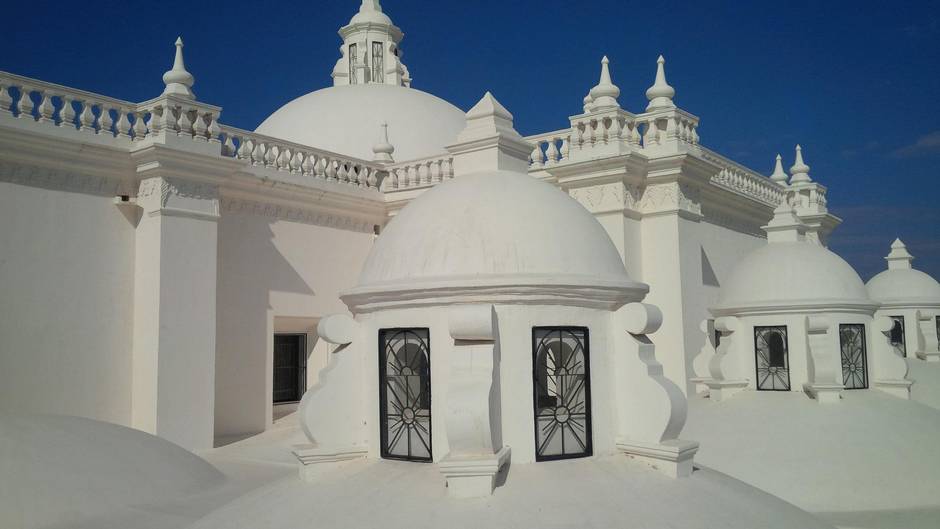 Leon’s status as a hidden gem can’t last forever. Bigfoot Hostel has become one of the biggest businesses in town by creating a backpackers’ bubble where young travellers with a taste for partying can easily forget exactly which country they’re in. The price points for the Bigfoot restaurant, bar, shuttles and packaged adventures, combined with a singles vibe, tend to exclude customers from other demographics, including Nicaraguans. But the Bigfoot universe is sometimes unavoidable. After enjoying a sunset over the roaring surf at Las Penitas, a fellow traveller tells me the easiest way back to town is in Bigfoot’s bright orange military truck, which shuttles between Bigfoot’s beach house and its headquarters on Leon’s “hostel row.” About 20 of us sit on benches, catching glimpses of the dark countryside when the clouds let the moonlight shine through. Passengers take turns announcing what country they’re from before the conversation turns to American politics, whether it’s safe to go to Honduras and where the best WiFi is.

The smell of charred chicken at the impromptu outdoor restaurants that pop up in the evenings behind the cathedral sometimes lures hostel-row backpackers away from their pizza and beer. Ladies in red aprons direct strangers to sit together at long cafeteria-style tables to eat assorted grilled meats and sausages, veggie fritters and gallo pinto (the national dish of rice and beans). One evening I share a table with an Australian living with a local family while studying Spanish, three American hostellers on their way to Costa Rica and a local businessman grabbing a bite after closing up his shoe store. We talk about whether San Juan del Sur, the famed surfers’ beach in the south, has become too touristy. The shoe salesman insists that we foreigners must walk on the roof of the cathedral, a surreal sculptural landscape of domes and cupolas, though we should take care to wear sunglasses to protect our eyes from the whitewashed glare. 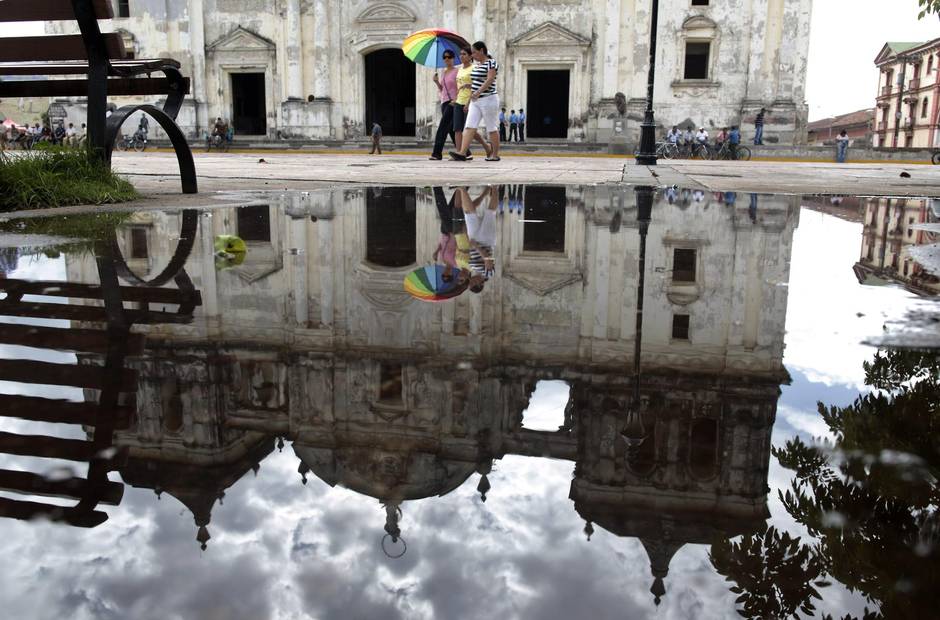 The heat in Leon can be scorching, but Pacific coast beaches are just 30 minutes away. (Esteban Felix/The Associated Press)

Near the end of my stay, I’m drinking a batido (a blended drink of ice, sugar and frozen fruit) outside Mercado San Juan, a hodgepodge of market stalls, when I spot Benjamin, the pedicab driver.

“You remember me?” he asks.

“The singer!” I reply. He blushes.

I wonder aloud how I might fix the broken handle on my suitcase, which I am carrying. Benjamin pedals me to the cobbler’s row hidden behind the market. A half-hour later, my bag is as good as new and Benjamin gives me a free ride back to where he found me in the front of the market. “You find a fiancée?” he asks. “No, have you?” I call back.

He laughs and pedals off without answering. 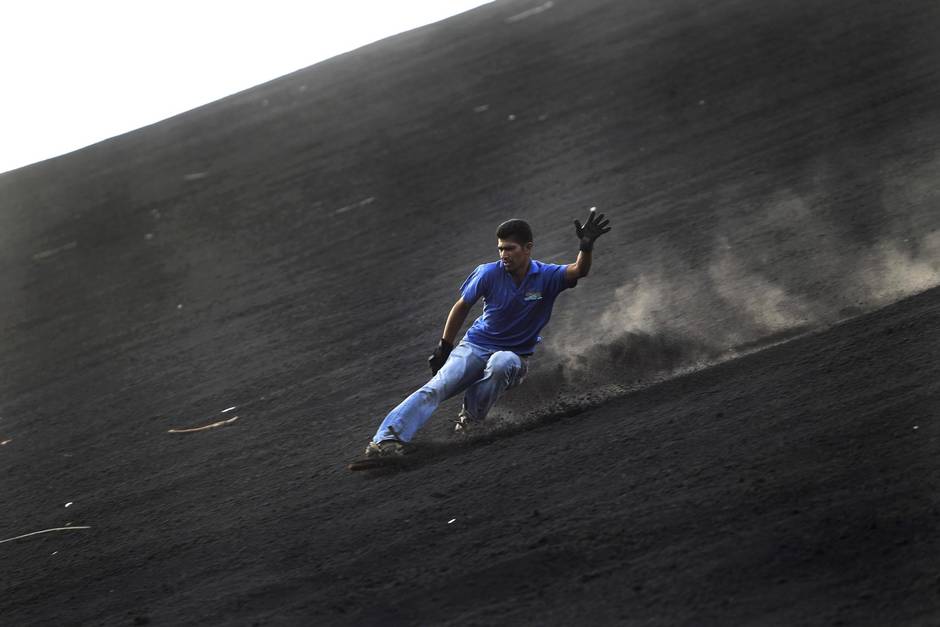 Daredevils use sleds or snowboards on the slippery hills of volcanic rock. (Oswaldo Rivas/Reuters)

Getting to Leon, unfortunately, usually means going through the mess that is Managua. A private shuttle to the capital, which is sometimes just a car and driver booked through a hotel or hostel, will cost you about $20. Government-regulated microbuses, which cost about $2.30, are a much better value. You have to catch them at the confusing bus depot, but they are frequent, make few stops and take about two hours, not much longer than a shuttle.

The rainy season is May to November, but at any time of the year the temperature in Leon rarely drops below 30 during the day and 21 at night. A room with air conditioning is a necessity and an abundance of hostels offer air-con beds in the $10 (U.S.) range. Something more comfortable, such as the charming

Hotel San Juan de Léon (hsanjuandeleon.com), which has a tiny swimming pool, will cost $40 and up.

Playa Roca (Playarocahotel.com) is a popular haunt, with showers where restaurant patrons can wash off the sand. Locals prefer Poneloya for its cheap fresh-fish meals, served up at outdoor restaurants that circle the local lagoon.

Leon is a jumping-off point for exploring the five peaks of the Maribios volcano chain. An array of guided tours is available along hostel row. Momotombo is the biggest volcano in the chain, but Cerro Negro, the most active, has become famous for providing daredevils slippery hills of volcanic rock to board down on sleds or snowboards. Volcano boarding tours start at $31 (U.S.), including, in one case, a tank top and a mojito. A more traditional hiking tour can cost $70 (U.S.) and up.